We looked inside some of the posts by rinnclear and here's what we found interesting.

in movies, when a scientist is held hostage and is forced to make a bomb or virus, like my guy, those villains don’t know shit about science. just make a gumball machine, my dude

i just want once where the villain is like, you are too late, i detonated the device and instead of doom and gloom it is just confetti sparklers with abba’s waterloo playing and the scientist is like, bitch you thought

Honestly when’s the next time you’ll get this kind of grant funding?

Thor, watching the Dora train: this is very interesting

T’Challa, watching Thor watch the training of the Dora, unsure how to proceed: really? Because Wakanda has a rich history of elite special forces made exclusively of women, and we take great pride in them

Thor: wonderful! But I was referring to their fighting style. It is very different from that of the Valkyries of Asgard, and I wish to learn it, if possible

Thor: when I was little I wanted to be a Valkyrie

T’Challa, breathing a sigh of relief: I was inconsolable for a week when my mother told me that I wasn’t allowed to join the Dora

T’Challa: I refused to leave my room

Thor: I refused to eat

(Shuri, filming this from behind a pillar: oh god there’s two of them) 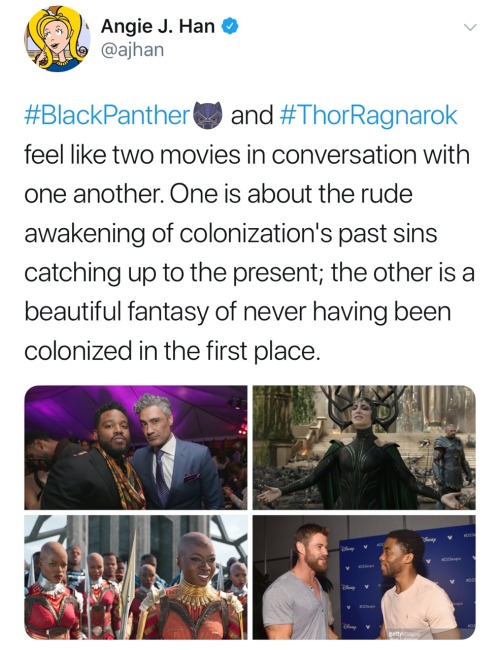 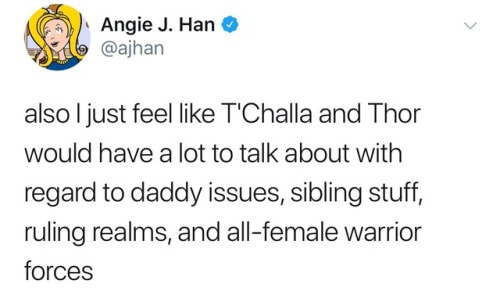 pepper and tony being Soft for the 3000 zine 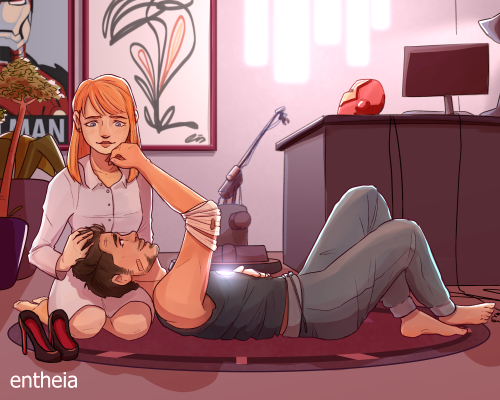 Jake is open to getting pegged by Amy!

first, there’s no sign of Thor’s powers that he learned to harness with Hela in the initial battle with Thanos. Like even if it wouldn’t do that much against Thanos they should have at least illustrated that, but instead they left him defenseless and made it so he had to get a even bigger weapon than his hammer. I mean, the whole point of Ragnarok was that he was he didn’t need his hammer to be Thor. That he was so much more than just a warrior with a fancy weapon. Secondly they gave him his eye back, which defeats its original intention as it was supposed to signify Thor taking over Odin’s place as allfather and accepting his responsibilities to his people. In this essay I will

The Russo brothers shot him before he could finish.

i think about this a lot

The guy got his life and career destroyed by his divorce, cut him some slack.

people grow old? like, that’s a thing that happens? leave my guy alone.

This man deserves everything let him he happy

Ok… This is what happened to Fraser

-His wife ditched him and asked for 900k a year,

-He stated that the stunts from the 3rd Mummy movie completely destroyed his body and he was in and out of the hospital for 7 years even having to get surgery to repair his vocal cords.

-He apparently blamed himself for all this which only worsened his depression.

All this but also that picture on the right is a really bad paparazzi photo compared with a professional quality movie promo still. No one looks good when some random person snaps you on the street, regardless of who you are.

Compare with this image from the GQ article last February:

The dude is 49 and has had a rough couple of decades, but he’s still lovely to look at, and I’ll fight anyone who says otherwise.

Plus, now he’s in Doom Patrol, which makes me happy af.

And let’s not forget he was probably slightly to severely dehydrated to look that buff in he first photo.

And I’m so pleased he got work again he seems like a good sort, and from the stealth pilot in Titans, Doom Patrol looks like it should be good.

It shouldn’t even matter what he’s been through. Body shaming of ANYONE is wrong.

2019 Brendan is still slaying, so btfu

This post keeps getting better and I’m here for it

I love this whole thread

The last time I saw this it was only at the first ‘cut him some slack’ part and it just progressively gets better each time.

We support this Brendan Fraser in this home

I’ll literally fight ANYONE that shit talks Brendan Fraser. One of my favorite actors and people since I was FOUR.

I’ll protect him at all costs😤

And if they announced a new George of the Jungle reboot tomorrow with Brendan in it…you can bet your sweet bippy that I would be the first in line with my entire family to witness his greatness. 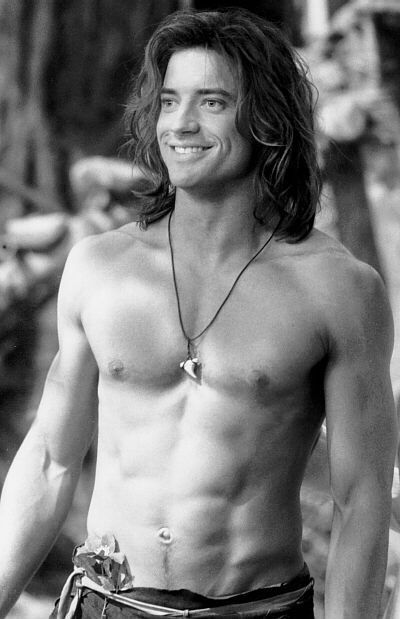 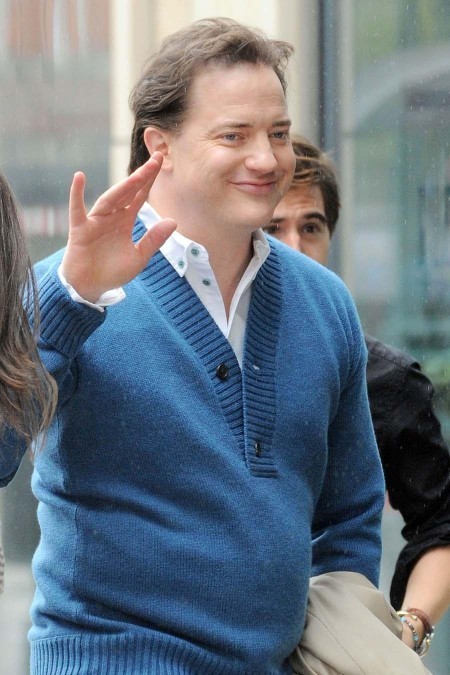 you light up my heart 💙

if you have read this book, please write to me whose translation you read and whether you liked it or not, this is very important to me

I know that there is a translation of Constance Garnett (British edition) and Richard Pevear (American edition), it will be great if you also specify where you are from (at least a country, for example, UK or USA)

he should not have to thank anybody for that tf

Just Eat have reported a 60% drop in Chinese orders, apparently. Like, this racist hysteria is not just “LOL, dumbass racists” - it’s causing appreciable harm to people’s livelihoods at the very least.

Anyway if you fancy an easy and also delicious way of telling racists to fuck off over this, the Big Chinese Takeaway Weekend is coming up. Literally just… have a Chinese this coming weekend. Enjoy. You deserve it. So do they. 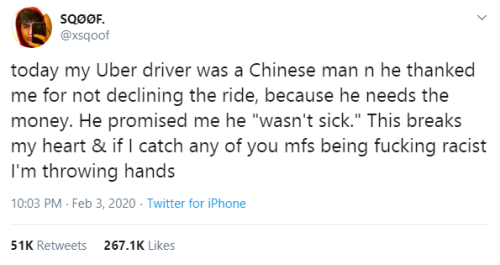 Taika Waititi has made Oscars history.

At the 92nd Academy Awards, the “Jojo Rabbit” writer-director-actor took the prize for adapted screenplay. This makes Waititi the first person of Māori descent to win an Oscar. He was the first ever indigenous person to be nominated in the category. (x)

Hey everyone! I’m updating my Patreon! I’ve made new rewards for all the levels, and more will be added if I get more pledges! I’m really excited to roll this out, I’m trying to find rewards that I think people would be interested in so hopefully you like what you see! If you’d like to pledge, you can do so here! 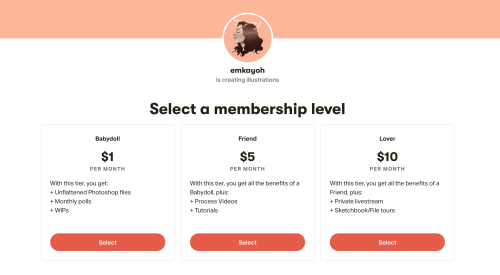 I’m reminded once again how this scene breaks my heart. “I knew there was a correlation between you and this” but he doesn’t know what, and y’all know WHY he doesn’t? or at least an obvious possibility?

Because he’s dying of heavy metal poisoning, dammit, and one of the main symptoms is confusion and memory loss! The palladium is stealing one of his real superpowers, his mind.

She could not have known, he was going out of his way to make sure she didn’t, and she had every right to be mad here; but I have to think, when all was said and done, when he finally came clean about exactly what the fuck was going on here, Pepper quietly kicked herself for this.

Okay but I also don’t like when people start telling that Pepper treated Tony badly. But… he was the one who acted like a jerk during party, he acted inappropriate towards Pepper when she tried to calm him down and he told her to go away. She didn’t know that he is dying.

TGP and BoJack fans hoW WE FEELIN?

i will never forgive the straights only talking about Chris Evans’ sweaters in Knives Out when Ana De Armas is literally RIGHT THERE and wearing the shit out of them. 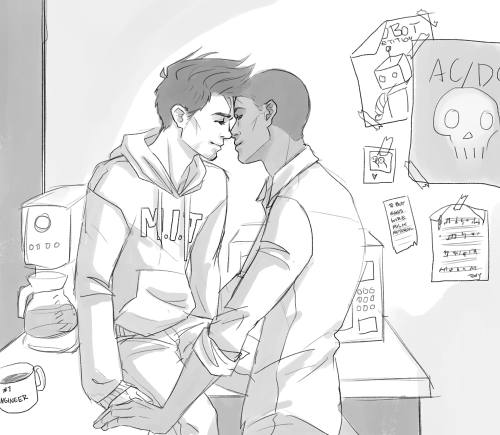 That is so much better than “Iron Patriot.”