Amber: Look, I may not be a saint, but I’m not an arsonist. I’ve never killed anyone.

Amber: I’ve never found someone’s wallet in a parking lot, thought about returning it, seen they lived out of state, so just taken the cash and dropped the wallet again.

Andi: That’s so incredibly specific that I’m inclined to believe that you have in fact done that.

200225 ajol_llama instagram update: Child im home. So many emotions atm. Freaked out yesterday morning to find myself not thinking about a show. My San DiegHOES really made the last show bittersweet. And there were a lot of bananas on stage at one point 🍌🤔. But serious, WE MADE IT GUYS!!! 24cities DONE! Its been an insage journey plus came back with some additional tattoos 🤪 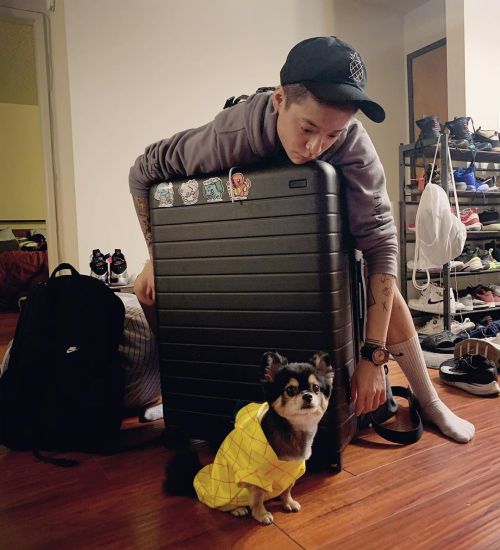 I just saw the show “Love is blind”

It is a program that bothers me but is addictive because of how bizarre it is. Fall in love with a person you met in a week and marry her/him in less than a month it’s an intense madness. But if you enter this show you have to be willing to try to fall in love, like when you sign up for a show like that, you must be mentally and emotionally prepared to be honest and open yourself to have a connection, otherwise it would not make sense for you to sign up for an experiment like that.

Of the 30 people who participated in this experiment, only 10 became a couple not counting the couple that broke the second day

I think Barnett and Amber would work perfectly as a couple if they were in high school (living with their parents, thinking that the only concern is school, not thinking about marriage and just having a good time) because they both get along, have fun, they live in the moment and have a strong sexual chemistry, but their relationship is based only on fun and sex. They live in the moment and act like teenagers without worries, it is as if adult life had not reached them. They are not very mature, do not compromise and hardly talk about serious/important things and they don’t think about the future or the ways in which they would solve their problems. When difficult situations come I don’t think they work, I really don’t see Barnett being the husband who economically supports his wife because he is very selfish and his decisions are based on his comfort (He chose Amber because she was fun, he is undecided and he was afraid of her, he preferred to break LC’s heart than to face Amber’s fury, instead of being sincere with both of them and telling them that he was not ready to have a real relationship) . She is also immature and does not have her priorities in order. Who prefers to pay $ 700 in makeup instead to pay that what owe from school knowing that the debt is increasing and thinks is ready to be a mother when you are not financially stable, you have no home and no job? She thinks a husband is going to solve her problems as if she were a disney princess, but no, what she need is to order her life or get a super rich sugar daddy and not a fuckboy who doesn’t know how to deal with problems and looks pretty scared of the debts she has (I thought that Barnett was going to pass out at that moment because I would do that if she tells me she wants to be a housewife and wants me to keep her). Both think and act as teenagers, not as adults ready to have a serious relationship and get married.

Jessica and Mark, I don’t want them to end up together, she is an abusive manipulator who belittles him because he is not attractive enough by her standards so she’s obsessed with a guy(Barnett the fuckboy) who sent her to the friendzone. I am Mexican, I understand that he was raised with my culture, it is normal for men to be taught to be persistent, passionates, affectionate and believe that if they try hard for a woman she will fall madly in love with you, but no, he needs to realize that there are people for whom it is not worth fighting for.

Kenny and Kelly, is one of the healthiest relationships there are, they understand each other, they talk about all things and find ways to solve problems without fighting, they respect each other, they have fun, they are economically stable, They are independent, their families get along good, they are friends and they are on the same page. It is the type of couple that could have a healthy and stable marriage or a mature divorce where children would not be traumatized. The problem is that it is a couple so well balanced and so undramatic that it does not work for a program, without drama people consider the couple boring and do not sell. If social pressure is difficult, it is more if producers, cameras, etc. are on top of you looking to find and exploit something bad in your relationship for the program to sell more. I think maybe they won’t get married because they haven’t been showy couple in the program for the lack of conflicts and maybe the producers have suggested that since they didn’t have sex they should end their relationship to make things more interesting in the end of the show, but why they have that’s the kind of relationship that is worthwhile in real life.

Lauren and Cameron, are similar to Kenny and Kelly but with the difference that they had sex and part that generates tension, conflict and drama, and they have to overcome that and not worry about what society will say for being an interracial couple. In a nutshell has a good balance between drama and a functional couple so the people loves them and think they are sexy, cool, romantic and nothing boring as Kenny and Kelly so they generates more attention in the show, so maybe they get married.

Damien and Giannina, they already seem married, but not in the good way, looks of those couples who go to therapy because they do not want to divorce but there is no sincere love in their relationship or if there only one of them feel it. I think they are cool for a romantic comedy where opposites attract, but in real life, fighting with someone all the time is not healthy at all. They are happy and super romantics for 3 seconds and they fight again, his family does not want her and they are different in the things that matter (for example, he and his family are Republicans who voted for Trump, she is Venezuelan who is against what the government do, that’s why he asked her if she agreed to change any of her ideals such as her political ideals and she almost beats him for suggesting that and she mention what she has to do for her family that lives in Venezuela). She is like the stereotype of crazy Latina Drama queen that has many mood swings and she is also a person with very liberal ideas and he is a very conservative guy who then tends to be half dick with his comments or with the fact that he wants her to change. Even if they got married, they wouldn’t last. In less than a month they already fight like this in front of people, they shout, they insult/ignore each other, enduring such fights in a year will end badly

stuff about amber because now I’m in the mood??? 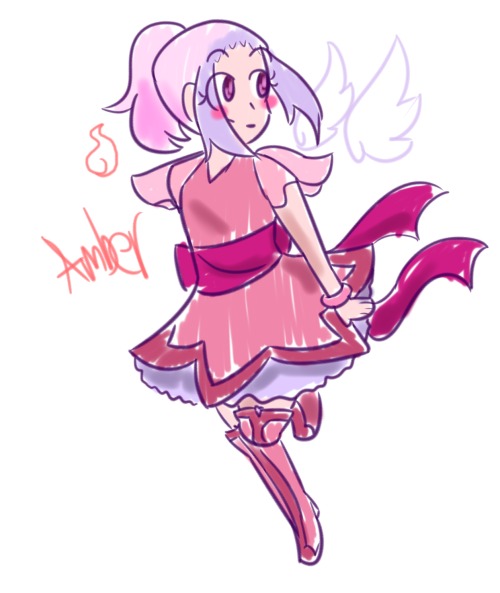 #cake's doodles, #amber, #terrain of magical expertise oc
4 notes · See All
clingtonicepeopleAnswer
y’all are so obnoxious this is why you don’t hear us talk about personal things it’s bc y’all don’t know how to act and treat people kindly

harry styles would not approve

#amber
3 notes · See All
mew-cakeAnswer
Roast Amber. Have at your own character

Send me a character and I’ll insult them

Okay. First off. Girl has depression and refuses to admit it. Like, no bby, it’s not normal or healthy to constantly get sudden bursts of guilt for past mistakes that weren’t even your fault. Like literally she is a CHILD. Who also happens to be the antivirus but THAT’S NOT THE POINT SHE IS BABY

Secondly, please learn to communicate better. Expressing negative emotions is okay!! She needs to tell the people around her that she gets lonely when they’re logged off!! You can tell them they care about you!!!!!

Fourth: seriously why the fuck are you my most developed character

#ask, #amber, #this was fun, #ask-zetto-and-tigerlily
4 notes · See All
petitegooseText

Missing my best friend. I held it together while I was at her moms, going through her closet, taking a bag full home with me (I’ll go back for more) but when I got home and changed into one of her favorite shirts I lost it.

Tell me this isn’t the same energy as amber looking for her boobs.

i´m having such a art block, but omg i love this two xd

they are the tipical “ :D and >:T” couple and it´s the best thing ever

Leaves from bath and body works!

turquoise blue; if you could start a garden, what would you plant?

olive green; are you currently reading anything? how do you like it so far?

mars brown; what’s a movie that always puts a smile on your face/makes you laugh?

Thank you so much for asking my beautiful soulmate! ☀️💛💛

I haven’t really decided on a name for Amber’s superheroine persona, but I know that I wanted her to have plant growth and teleportation powers! However, her abilities are based on the sunlight, so she’s much less powerful at night. She also works together with Illuminata, her reporter best friend and roommate! They have a garden together~

#rf4srelease, #rune factory 4, #rf4, #amber, #whaaaaat i did a drawing thats not frey??? whack, #please excuse how messy it is ill do a better one later, #im just. so dang tired, #i work ten hours tomorrow lmao, #if anyone wants to hear more about my superhero au....hmu ;o
13 notes · See All
whoisshewhatisshedoingAnswer
night owl & petal 🌸

Night Owl - Would you want to live forever? Why/why not? Idk. The thought of being able to take things super slow and explore everything i desire in this world in detail because i have time to spare seems nice. I am also really interested in experiencing how society changes as time goes by. But it would all be too lonely, and taking into consideration fow the future of the world is looking, i dont think id like to stay aroubd to watch it go down. So ill stick to mortality, if just for a little while. This is not saying i wouldnt let a cute vampire turn me tho. lmao

Petal - What’s your favourite flower? Orchids!!! (I cant choose a specific orchid because they are all wild and i love them all)

Thanks for asking, dear!

ruby; what does your ideal first date look like?

Hmm…pounding hard seltzers before going to a comedy show. We get more drinks inside and laugh a lot. I’d like to do that. It doesn’t require a lot of talking, and setting yourself up for too much talking on a first date is terrible.

violet; is there any place in particular you’d like to settle down?

I haven’t traveled enough to say, but I’d like to end up some place that’s sunnier and warmer than here, but just as vibrant and full of beautiful nature.

cobalt blue spectral; what is the most beautiful place you have ever been to?

Lol haven’t traveled much…Allegany has a very special place in my heart and I find it very beautiful.

Thank you for asking, my queen!!