THIS IS NOT MY DAMN KINGGGG 😩

Chadwick Boseman is old enough to be my Dad.

Mood: It’s the summer of 1969, you’d just wrapped up doing a film that you were doing for the last four and a half months ,you’re riding around Los Angeles in your brand new Mustang that was a gift from your fiancé, director Chadwick Boseman who had directed you on in your first feature film four years ago, he’s chilling in the passenger seat with dark sunglasses on occasionally glancing on at you, you catch him for a second before looking back on the road, smirking from catching him watching you.

You giggle and give him the finger

A/N: This wasn’t planned, but I found this WIP, so I finished it. Enjoy.

"You wanna move the camera up from between my legs?"

learn the alphabet with avengers at disneyland 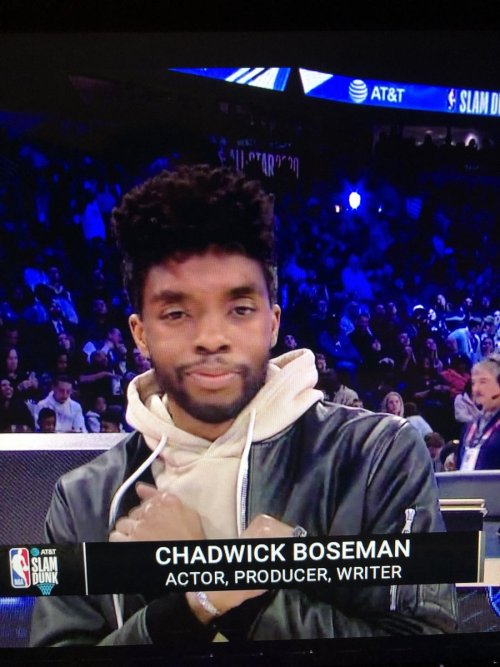 i know that black panther came out 2 years ago but I still can’t stop saying “wakanda nonsense is this?!” when something happens

#me when spiderman left the mcu for a bit, #black panther, #chadwick boseman, #tchalla, #mcu
7 notes · See All
kida114Text

He look younger if you ask me😩👀

ya know how there’s an avengers groupchat with the OG6? I wonder if each has one? y’all think Seb would be in the black panther one?

two years ago today i saw Black Panther. as an african-american, i felt like i had no representation. when i was growing up there wasn’t a black disney princess or superhero or anything like that and it was hard to deal with as a child. when i saw Black Panther i felt empowered. not only was there a black superhero (who wasn’t a side character), but there was a whole army of strong, powerful, black women. i was so proud to be apart of this culture.

thank you Ryan Coogler for directing this masterpiece and bringing more representation into Hollywood. thank you for making history.

thank you Leitita Wright for playing the most intelligent, funny, and talented girl on earth and showing the potential that young black girls have.

thank you Danai Gurira for playing the leader of an army full of women and showing the strength and power that women have.

thank you Michael B. Jordan for playing the best villain in the MCU

thank you Lupita Nyong’o for playing a strong, loyal, and caring woman who did what was right for her country. her bravery is inspiring.

thank you Chadwick Boseman for playing our hero and king. for being an great influence on and off screen. thank you for bringing this character to life.

Never forget how shady this moment was

This is NOT my king

Stank face and everything 😭💀

Love the hair tho 🥺

My MBJ said he look like he stole Michael’s clothes 😂

can y'all let them live ✋

“Nice place you got here,” Natasha remarks as she studies the small shack that Bucky had come to call a temporary home. The former soldier looks up in surprise, setting his bags back down on his bed.

“It’s not much, but it kept me in peace for a short time,” Bucky replies, his blue eyes traveling shortly around the tiny home, before returning back to his things. Instead of his usual Wakandan attire, he’s dressed in a green army style jacket and blue v-neck, a black cap in hand.

Natasha nods, her green eyes remaining trained on Bucky as he continues to pack. Under her gaze, the former assassin shifts uncomfortably, before meeting it.

“You’re keeping something from us, Barnes,” Natasha beats him to speaking. “I know what you told Rogers the other day- Sam and I weren’t that far away from earshot. But there is something else you’re keeping from us,” Bucky swallows down the frustration building up in his chest and stuffs a few shirts into his backpack, atop a bag of knives.

“If I knew something, don’t you think I would tell Steve?” He shoots back, giving her a pointed look. The hero raises a brow, frowning.

“I don’t think so. Because whatever this is, it’s scaring you. And if something has the ability to scare the Winter Soldier, then it’s a bigger threat than you first anticipated,” Natasha shares her findings, taking a step closer. “You know something about this weapon, and you choose not to share your knowledge with the rest of us because- even after everything we went through- you still don’t fully trust us.”

“You don’t know anything about me,” Bucky snaps angrily, glaring at the red head. Natasha’s lips only turn up slightly in a knowing way.

“Do you even know yourself, Bucky Barnes?” Natasha questions, giving him a curious look. “I don’t trust you- I’m sorry, but I can’t. If whatever this is has any chance of putting us in greater danger than we already are-” Natasha takes a threatening step towards Bucky, her eyes turning to slits. “-I will not hesitate to take you down.”

When you take your Uncle to DTLR so he can impress his young girlfriend.

i find it incredibly saddening and frustrating that this movie is always pitted against wonder woman and black panther. people are constantly saying “wonder woman/black panther was so good.. and captain marvel doesn’t measure up.”

as if just because it has a female lead, people automatically feel the need to compare it to wonder woman. are movies with male protagonists pitted against each other? no. because they’re all male-led and it’s not like the storylines are similar at all. just because the lead has a vagina, they’re instantly each other’s competitors.

and the fact that they compare it to black panther too!! just shows that any minority group represented on tv will automatically be compared to another minority group.