Has anyone made a Weird Science!AU with Stony??? Please I NEED TO KNOW!

I’ve been super packed with school work lately and needed to draw something soft soooo…who better to do that with than with my favorite father-son duo? :D 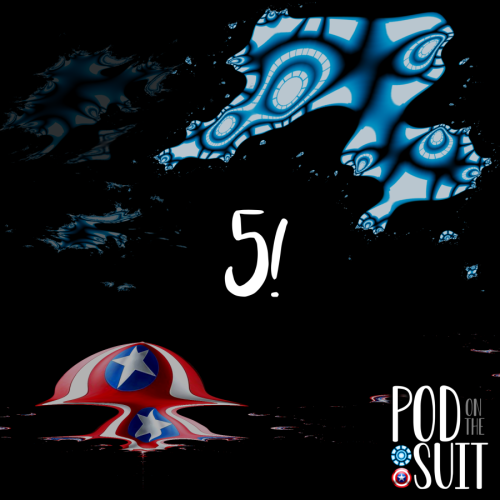 Inspired by one of @ironstrangeprompts prompts!

Stephen bring stray animals to the sanctum and tony often comes over to play with them.

#art, #artists on tumblr, #digital art, #iron man, #ironstrange, #drawing, #marvel, #stephen strange, #tony stark
15 notes · See All
stark-strange-loveChat
Stephen: I am SO angry right now. I am So GENUINELY pissed off. This is the LAST straw! There's nothing you can say to make me forgive you!
Tony: Steph-
Stephen: i forgive you
#ironstrange, #tony stark, #Stephen Strange, #iron man, #doctor strange, #avengers
61 notes · See All
comicbookcoversPhoto 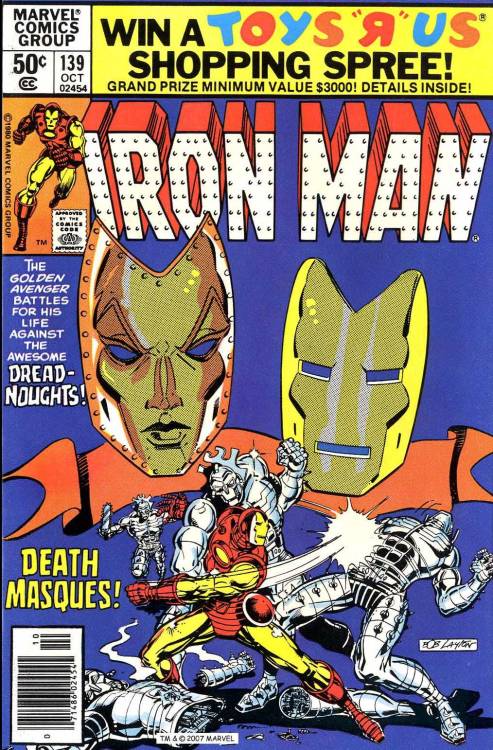 #comics, #iron man, #madame masque, #dreadnoughts
33 notes · See All
clintbartonruinedmylifeAnswer
So, would you agree to write a direct sequel to "various clint barton prompt part 3 chap. 23"? where Tony clame (literally) what he considers his (poor clint) and maybe what happen next ? like how does their relationship evolve (some Stockholm syndrome maybe?). You can go explicit et graphic if you want I won't mind 😇. For the length, the longer the better but no pressure, I'll take anything really. Thank you❤️ (Also if you can tag me here when you post it, that would be very much appreciate)

“You wait here,” the huge blonde guy said and shoved Clint into a room. Steve, he remembered. Stark had called him Steve. He closed the door and then it was quiet.

“Fuck,” Clint mumbled and wiped his face with both hands. “Fuck!” His hands trembled, his mouth was dry and he felt nauseous.

Minutes ago this Steve guy had showed him the room he was supposed to sleep in but it was more like a prison cell. It contained a small bunk, a chair and a dresser, nothing else. And there was no doorknob on the inside.

But now he was in a huge bedroom with a bed almost as big as the whole room Steve had said was his now. Everything here was pure luxus from the carpets and the furniture up to the art everywhere. Clint tried to swallow but his throat was tight.

“Fuck,” he murmured again. His knees felt like pudding and he really wanted to curl up in a ball right now but he wouldn’t give Stark the satisfaction. At least he didn’t seem to know that Lila wasn’t Barney’s kid but his, Clint’s. No one knew but him, Barney and Laura. Not even Lila knew. As long as Stark thought she was Barney’s daughter he could keep her safe. He would do everything to keep her safe. All of them.

When he heard the door he whirled around and saw a dangerously grinning Stark coming in. He let his eyes trail over Clint’s body before he raised his brow.

“Why are you still dressed?” he asked.

Clint swallowed hard and gritted his teeth. A cold shiver ran over his back and his hands started to tremble again.

“Do I have to repeat myself?” Stark snarled when Clint didn’t move.

“Why are you doing this?” he managed to ask. Stark sat down in one of the armchairs opposite of the bed and pretended to deliberate, then his grin broadened.

Clint closed his eyes but he couldn’t risk it, he didn’t want to risk Stark getting angry and so he just took a breath and pulled his shirt over his head.

“Go on,” Stark said and gestured with his finger. Clint obeyed. He removed his pants, his socks and his boxers. When he was naked he just stood still, let his arms hang at his sides so Stark could see everything. His smirk became hungry and Clint didn’t like it.

He closed the distance and now Clint could smell his expensive cologne. It took all his willpower to stay still when Stark reached out to touch him, let his hands trail over his chest and his stomach. He pressed his lips together when Stark took his dick in his hand, weighed his balls and squeezed them a bit. It hurt but not too much. Not yet he assumed.

“Get on your knees,” Stark commanded. Clint looked at him for a long moment but then he just dropped down. He could do it, he could keep them safe.

“You know what I want,” Stark said and Clint closed his eyes. But then he opened Stark’s fly with trembling fingers, pulled his pants down a bit and exposed Stark’s cock. He had shaved his pubic hair and - much to Clint’s amazement - had a Prince Albert piercing.

Clint licked his lips, leaned forward and opened his mouth. He licked over Stark’s glans, teased the golden ring before he closed his lips around it. He relaxed his throat and used his tongue, tried to get as much as possible into his mouth before he moved back.

Clint obeyed. He closed his eyes and sucked and licked Stark’s dick, massaged the vein on the underside with his tongue and every time he was at the glans he teased the ring. Stark’s breathing sped up and he started to moan, he put his hand on Clint’s head and guided him.

Stark was close, Clint could feel it, could hear it and he just prepared himself to swallow his load when the man pulled back so suddenly, Clint almost toppled over.

“Not like that,” Stark breathed. “Onto the bed, on your knees, face down.”

Cold shivers ran over Clint’s back and his stomach twisted. He tried to swallow but his mouth was so dry.

“Come on, hurry up,” Stark hissed and shoved Clint.

He rose, went to the bed, climbed on it on his knees and lowered his head. His ass was exposed and Clint knew what would follow. He squeezed his eyes shut and prepared himself for the pain.

Steve leaned against a wall not far away from Stark’s bedroom when he heard the painful screams. He closed his eyes and felt tears running over his face. It was his fault. He had set the trap to capture this man and now… now Stark… he hurt him the way he had hurt Steve.

He dropped his head against the wall a few times.

It was his fault, Steve’s, that this man had to endure this. But he had no choice. Stark knew where Bucky was. He knew what Bucky meant to him and he would kill him without hesitation if Steve disobeyed him.

The door to the bedroom went open and Stark came out in his red, silken gown. He came to him, a satisfied grin on his lips.

“Bring him to his room, Stevie,” he said and patted Steve’s cheek. He had to concentrate not to flinch. “Bring him some food and water and…” he seemed to deliberate for a moment. “Good job,” he said then. His grin broadened. “Maybe… maybe one day I will tell you where your Bucky is.”

#tw: non-con, #clint barton, #hawkeye, #tony stark, #iron man, #ironhawk, #steve rogers, #captain america, #mob boss au
6 notes · See All
incorrect-multi-idiotsChat
Ned: Bro, give me one more chance.
Peter: How can I? When you Bed, Bath & Betrayed me?
Ned: Bro please... I couldn't give up on that date with Betty, it was our anniversary.
Peter: It was our anniversary too! The anniversary of the time we blew up Mr Stark's suit for the first time and then fixed it... Does it mean nothing to you?
Ned: Don't say that Peter...
Tony: Hold up, you did what to my suit?
#ned, #ned leeds, #peter parker, #spiderman, #spider man, #Amazing Spider Man, #tony stark, #tony, #Iron Man, #ironman, #iron dad, #Irondad and Spiderson, #comedy, #marvel, #incorrect quotes, #incorrect marvel quotes, #incorrect marvel, #incorrect avengers, #incorrect avengers quotes, #Avengers, #avengers endgame, #funny
10 notes · See All
big-gay-apocalypsePhoto

Right where we’re supposed to be. 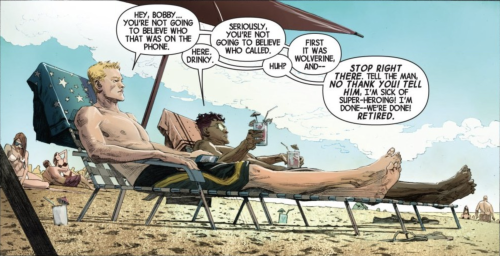 I’m not crazy, Pepper. I just finally know what I have to do. And I know in my heart that it’s right.

Hey hey @jehbeeeh tagged us, so here we go!!

Mod Stella’s first line (from my unpublished Letters From the Void Redux one shot— The Pain, The Sorrow, The Lonely)

It’s been a few hours since Steve woke up in the hospital, in more pain than he’s ever felt before.

This is a WIP that I haven’t even posted yet but it’s nanny!Steve and CEO!Tony (feat. young!Peter)

The alarm on his phone goes off and he nearly has a heart attack.

Steve and Tony: *are happy and cute together* 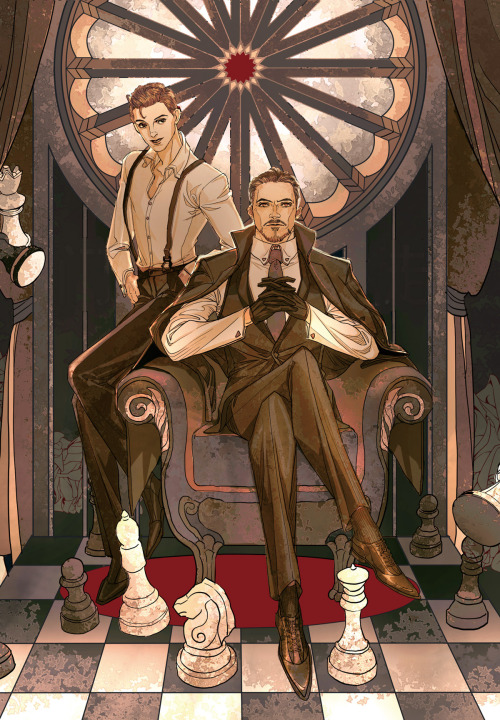 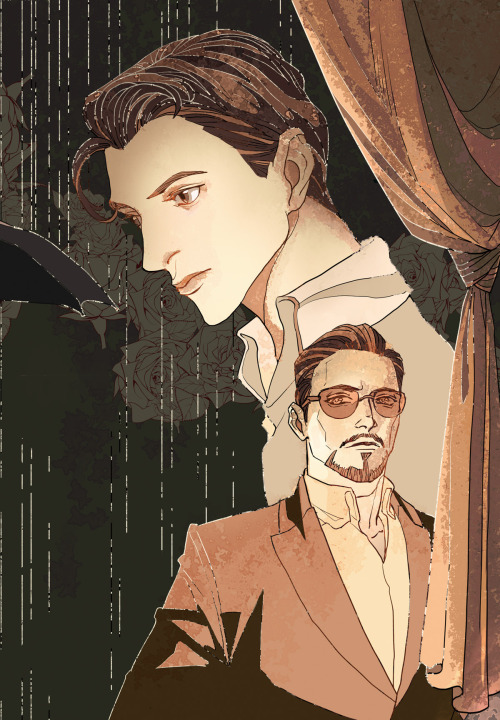 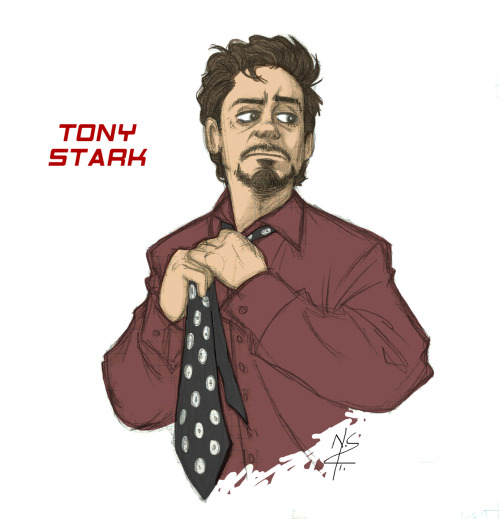 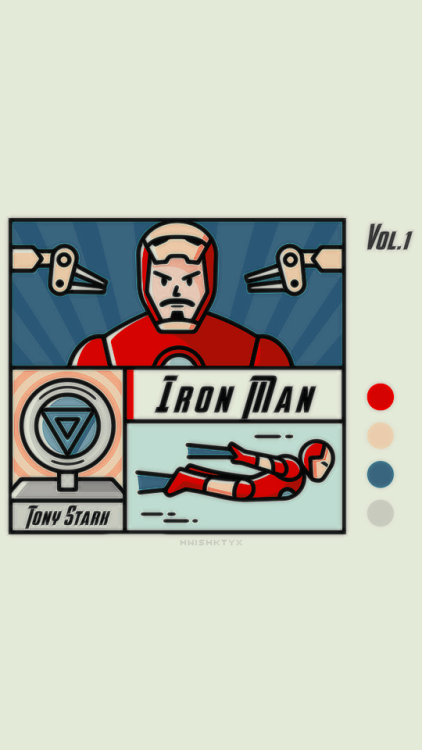 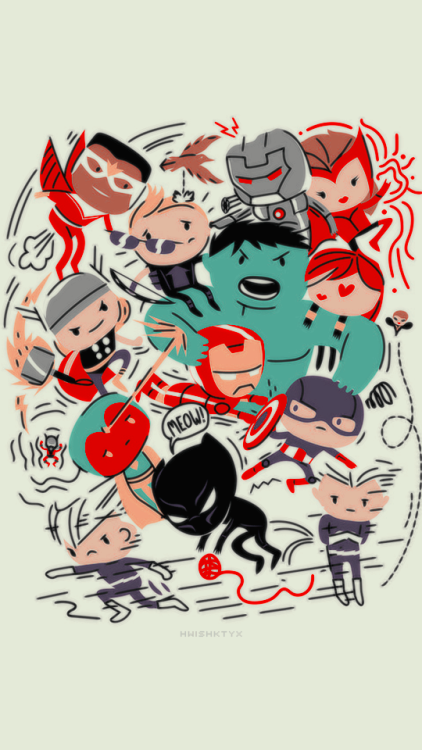 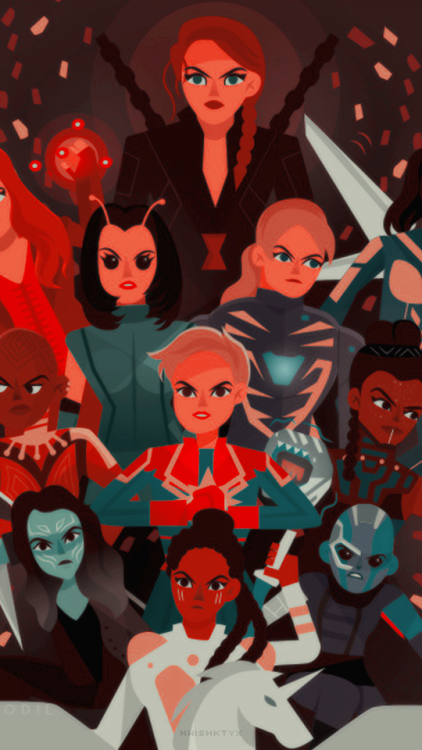 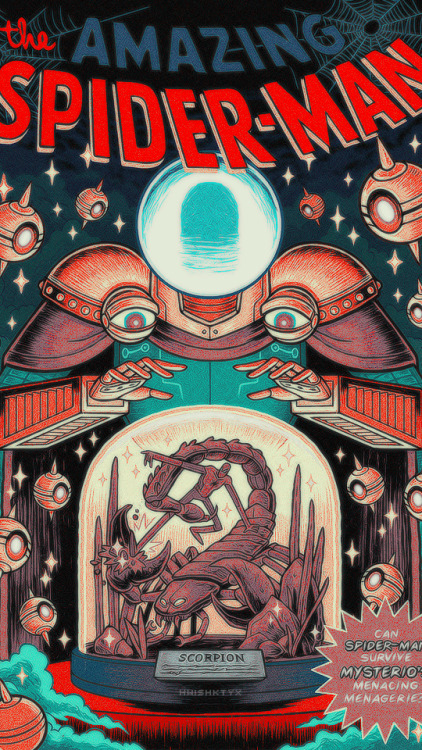 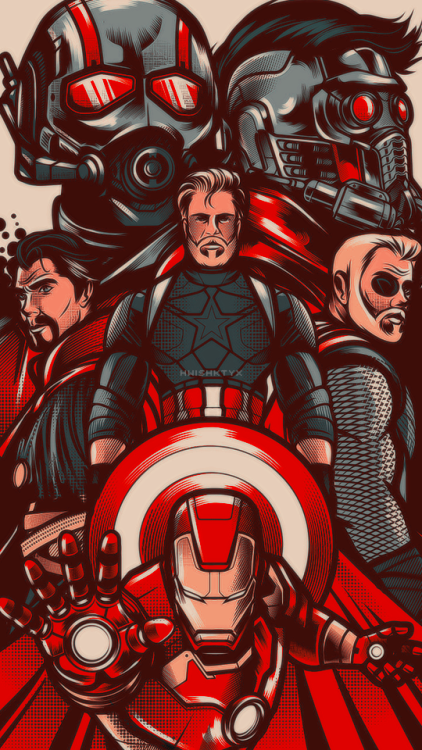 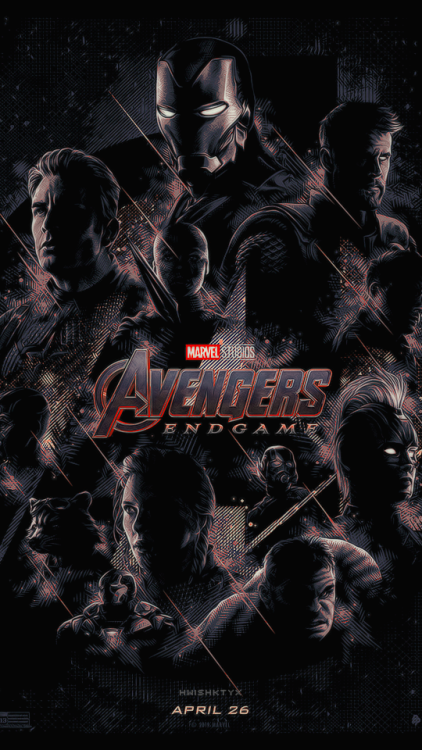 ZHOU LIEFEN & AMY CHU (W)
KENG (A/C)
THE TEAM-UP YOU’VE BEEN WAITING FOR: AERO AND IRON MAN!
AERO’S powers are put to the test! Can the legendary IRON MAN teach Aero the meaning of teamwork?
Will they save SHANGHAI, or are they just falling into MADAME HUANG’S trap?
32 PGS./Rated T+ …$3.99 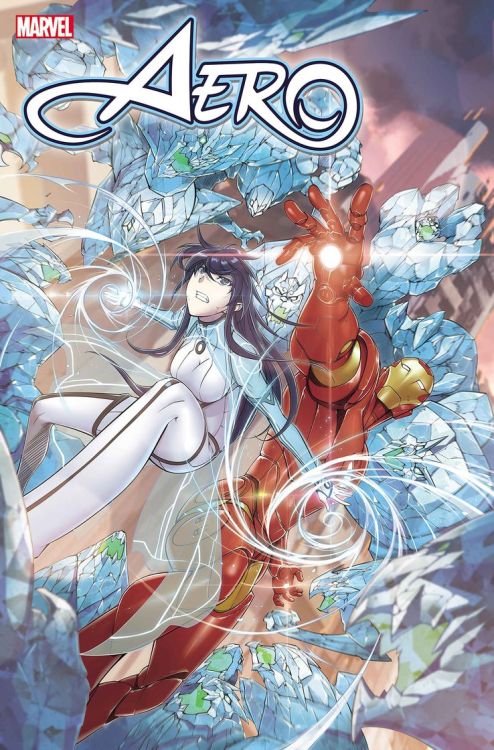 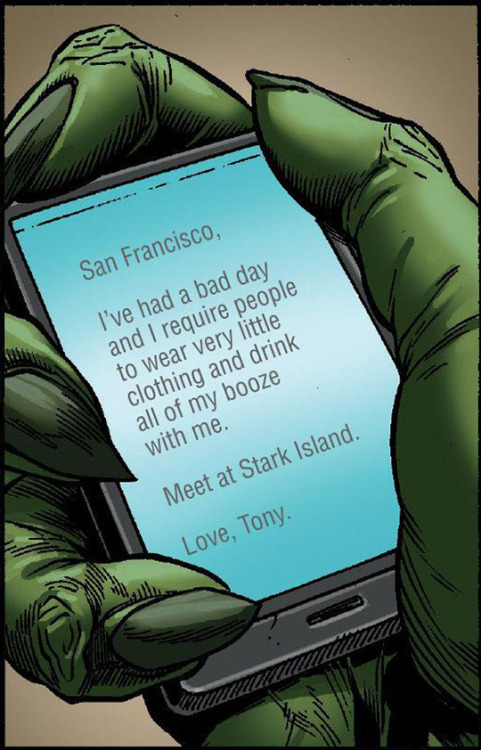 hey hey! this is a continuation of this fic that i wrote yesterday! hoo boy it’s pretty long klsdfjlkasj

it’s the last part of the fic unless you guys want me to write more!