time for the openings and endings :0

#every mdtk ever, #474, #midotaka, #knb, #•i have no idea if some of these are repeats sorry hhHh•
3 notes · See All
incorrectbballboysChat
Murasakibara, labelling his bento: DO NOT EAT MY LUNCH. I HAVE 7 SHRIMP AND 4,377 RICE.
#s: ?, #but it was an image, #knb, #murasakibara atsushi, #kuroko no basuke, #incorrect quote, #kuroko no basket, #queue
11 notes · See All
blue--in--greenText

Midorima: *comes in with a 5 foot stuffed teddy bear*

Miyaji: hey uh, whatcha got there?

#every mdtk ever, #473, #midotaka, #knb, #•we’re nearing the endgame fellas•
12 notes · See All
incorrectbballboysChat
Kasamatsu: I know you're making jokes about how attractive you are to hide your sadness.
Kise, sobbing: It's not a joke! I'm a legit snack!
#s: the good place, #knb, #incorrect quote, #kuroko no basket, #kuroko no basuke, #queue, #kasamatsu yukio, #kise ryouta
31 notes · See All
ourotakuparadiseAnswer
Hi! I would love to ask for a headcanon with Kagami, Aomine and Himuro with a s / o who is a national rap champion. 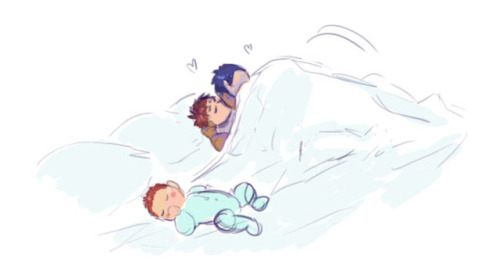 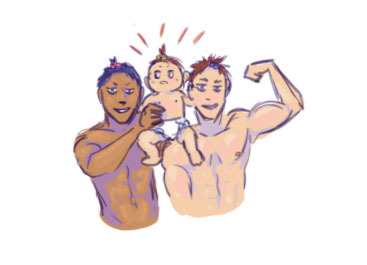 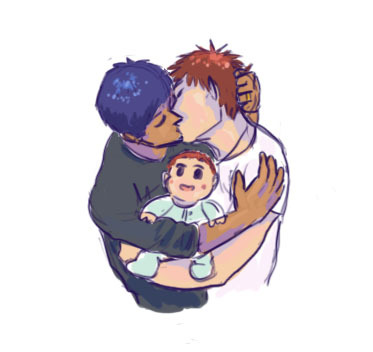 #aokaga, #knb, #aokaga fam, #my art
5 notes · See All
ourotakuparadiseAnswer
Hi! can I ask for a headcanon with Murasakibara, Midorima and Kise with a fem! s / o who is a pop idol.

A/N: Heyy anon,,these were fun to write so we hope you like them hehe ~Bliss & Lily

summary: a Hogwarts au where Haizaki struggles to avoid Nijimura more than his own problems

“Well,” Haizaki says, “goodie two shoes charm doesn’t work on everyone. The Gryffindor team might be shit.” He thinks of Nijimura’s neat hair. “He probably sucks.”

Agile. He has complete control over the broom, over his form. He blocks a quick shot from Ravenclaw’s best chaser - their third blocked shot in a minute.

As a keeper, Nijimura is weighed down by protective gear but shows no hindrance in his movement. Somehow, he seems lighter than everyone else in the air.

Haizaki hears someone behind him in the stands say: “It’s hard to believe he’s a mudblood, isn’t it?”

#nijihai, #feels like coming home from war to shout into the void about this pairing ahahahah, #fic, #PLEASE let me know if you want me to finish it off!!!!, #i probably will as im falling back into nijihai hell somehow, #nijimura shuuzou, #haizaki shougo, #kuroko no basuke, #knb, #nijihai fic, #nijihai fanfic
0 notes · See All
galaxy-of-meText

the gom: i am a cold, tourtured soul. i’m still not over my emotional trauma from middle school.

I need to re read better cuz the light novels!!!

#knb, #kuroko no basket, #kiseki no sedai, #my love, #my shipps!!!!
1 notes · See All
incorrectbballboysText

Kagami: Aomine, you are drunk.

Kagami: Damn, you are really drunk.

#every mdtk ever, #471, #472, #midotaka, #knb
22 notes · See All
incorrectbballboysChat
Kagami: How are things?
Kuroko, staring into a milkshake cup: Please don't make me think about my life.
#s: tumblr, #knb, #incorrect quote, #kuroko no basket, #kuroko no basuke, #queue, #kagami taiga, #kuroko tetsuya
69 notes · See All
ourotakuparadiseAnswer
Hi! I can order a hc for Riko, Momoi and Chihiro with a small FEM! S / O who appears to be harmless, fragile and naive, but is a badass and talented martial arts athlete?

#every mdtk ever, #468, #469, #470, #midotaka, #knb
25 notes · See All
incorrectbballboysChat
Kagami: *gets down on one knee*
Akashi: Oh my God, it’s finally happening.
Kagami: *falls over*
Akashi: The poison is kicking in.
#s: twitter, #incorrect quote, #knb, #kagami taiga, #akashi seijuro, #kuroko no basuke, #kuroko no basket, #queue
70 notes · See All
blisslilywritesAnswer
Hi! Can I request domestic GoM (and by that I mean plus Kuroko)? Thank you!!

#kuroko no basket, #knb, #kuroko's basketball, #knb imagines, #aomine x reader, #aomine, #akashi x reader, #akashi, #kuroko x reader, #kuroko, #kise x reader, #kise, #midorima x reader, #midorima, #murasakibara x reader, #murasakibara, #knb x reader, #gom x reader
13 notes · See All
knb-shorts-and-sweetsAnswer
Salute! It's my first time here and I liked it. Can I ask for a scenario about Kirisaki Daichi (+Matsumoto, for every guy)? They've had a fight with their fem s/o and haven't spoken for two or three days. And suddenly they heard a guy (not from the team) talking to his friends about their s/o: "If they break up, then I will not miss my chance."And then this guy spots their s/o at the end of the corridor and heads toward her. Thank you for your creativity)

Hanamiya: He supposed he had let this go on long enough. There were slimier guys in this school than himself, and he was well aware. You were standing by your locker, like a gazelle at a watering hole, and it was so fun to slam his hand on the lockers on either side of you, trapping you. When you didn’t give much of a reaction, he knew you were still mad. It was probably justified, so he wasn’t going to bring it up. No. He just wanted to make up, and he wanted to make a scene of it so that guy knew what was up. “I’m an asshole,” he admitted with a soft sigh. “But I need you to kiss me right now so I know that I’m your asshole.” Far from a romantic gesture, but you couldn’t help but comply.

Hara: In any other situation, he would have let this go on until you were the one to cave. But knowing that there were wolves lurking about, ready to pounce on you at the first chance, he realized he wasn’t willing to risk your entire relationship for the sake of pettiness. He was approaching you from behind and already had the pack of gum in his hand, ready to offer you a piece. The bubble he had been blowing popped when he finally reached you. “It’s mean of you to make me apologize,” he complained softly. “But I don’t want to fight anymore, so I’m sorry.”

Furuhashi: Enough of this. He didn’t bother with any words as he grabbed onto your arm and turned you to face him. Without giving you a second to register whose face you were looking at, he slammed his mouth against yours. He stared directly at the guy for a moment as he felt you melt into the kiss, almost as if he were trying to turn him to stone. But your touch was able to send such waves of euphoria through him, pretty soon his eyes fluttered shut as well and it was just the two of you in the moment.

Yamazaki: Enter panic mode. You hadn’t even looked at him since the fight, which was already making him nervous, but now he had to worry about someone trying to weasel their way into his place as your boyfriend? He seemed composed, maybe a bit angry, as he made his way swiftly toward you, although anxiety was bubbling underneath his skin. “Are you still mad at me?” Straight to the point. He didn’t have time to waste trying to play petty games with you. “Not so much,” was your reply, which earned you a soft sigh of relief as he wrapped his arms around you.

Seto: This was more annoying than anything else. He would have been just fine giving you the space you needed to cool down, but hearing what that guy said actually motivated him for once. He approached you from behind and, when he was close enough, he slipped his icy hand in yours, startling you slightly. He leaned over you, pressing his nose into your hair almost affectionately. “I know we’re not breaking up soon, but if I ever see you around that guy, I’ll have to beat the shit out of him.”

Matsumoto: He had to pass the guy who made the comment on his way towards you, so he took the opportunity to “bump” into him, nearly knocking the guy into the lockers. The noise drew your attention to him, which wasn’t planned but also wasn’t unwelcome in the slightest. Your arms were folded across your chest, which wasn’t a good sign, but he managed to approach you while maintaining his composure. “We’re not breaking up,” he told you sternly. With a raised brow, you simply responded, “Well duh.”