#akashi seijuro, #kise ryōta, #generation of miracles, #kuroko no basket, #mirai e no kizuna, #rakuzan
2 notes · See All
blisslilywritesAnswer
Generation of miracles with a S/O who’s better than them at basketball but is shy about it/doesn’t show off too much headcanons plz! 🙌🏼😁🤩😁🙌🏼

A/N: Heyy anon,,these were fun to write so we hope you like them hehe ~Bliss & Lily

Even after everything Bokushi’s done to the Generation of Miracles, Teiko, and even their current teams, they still welcome both Oreshi and Bokushi and think of them as “Akashi”, instead of rejecting “Bokushi” or distinguish Bokushi from Oreshi completely.

And that, guys, is what I call real friendship (and generosity).

Nijimura: Yeah, I heard a bit about it from Akashi.

awww so they’re still in contact even after they graduated from Teiko.

The moment I stepped foot on the AkaMido ship, I immediately knew that I could never go back. Ever. Don’t ask me why, I just knew.

Murasakibara: Are you okay with that~? ‘Cause, if all we wanted to was win, wouldn’t it be easier if we all to the same place?

Although basketball is merely an extracurricular activity to them and they even claimed it to be quite “boring” during their time in Teikou, some people (like Murasakibara) still thought of the idea of being together in the same school so as that they could keep following the “winning” motto planted by Akashi and keep winning. Not to mention choosing a high school to attend isn’t just based purely on their clubs but their facilities, their locations, subjects etc.

They hated playing against other schools, made a number of bets among themselves behind their opponents’ backs to keep their interests in basketball, went as far as trying to control the whole game’s score because their rivals were “weak”, but somehow some of them, even just fugitive, actually talked about a possibility which is being together after finishing secondary education, so they could also dominate the high-school level tournaments, as the “Teikou Generations of Miracles”.

In the end, Akashi admitted that none of them wanted to “go to the same school as any of the others”..

Akashi: Coincidence? I think not. There are only a limited number of elote, national-level clubs. We should have had a few overlaps in prospective school. But despite that, there isn’t a single one among us who thought of going to the same schoola as any of the others.

.. but for such a thing to be said out loud briefly like that means this possibility is nearly impossible. Not in this specific universe, however, we can’t be sure about other parallel universes out there. Lol. 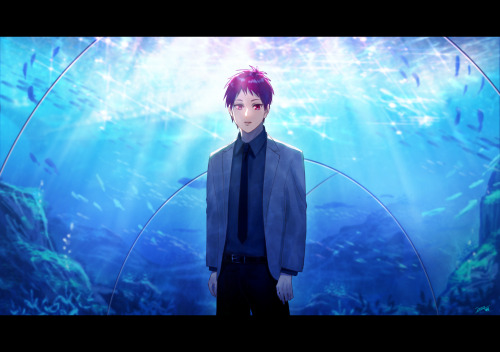 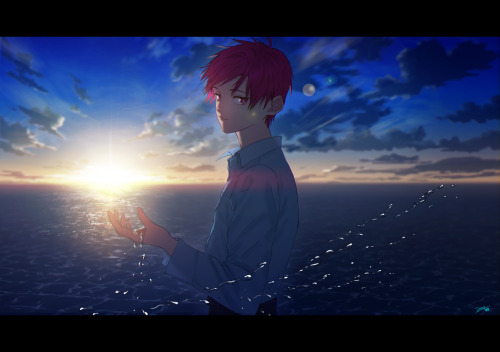 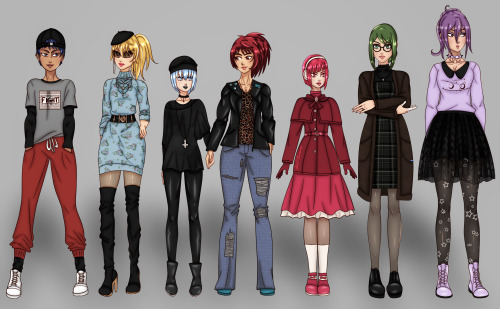 “Then can I ask you for the reaction of GOM, Kagami, Seto, Hara, Furuhashi, Yamazaki to this: their son is madly in love with Hanamiya’s daughter? Please.”

Tags: They are confused together.

You can also read this chapter at AO3 and FFN.

Author’s Note: Here we are with Akashi taking their relationship even further, Kuroko opening up about his issues and a hopeful ending.

Publishing a 15.000+ word story in a week was quite a difficult journey for me - especially a story this emotional. As with all my fast-written stories, I hope there are no plot holes and if there are - ignore them! :D

Thank you everybody! I hope you liked the story! And especially big thanks to the organizers of this event @vanilla-daydreams , @theuglycrybaby who gave us the chance to rekindle our Kuroko no Basket feelings again.

Hope to see you again!

Akashi decided that traveling was easier than waiting, tightening his hold of the paper shopping bag. His eyes were glued to the arrivals screens outside of the station.

For the rest of the week, his conversations with Kuroko touched no heavy subjects - and did not indicate Kuroko’s thought processes. In case their relationship ended today, Akashi came with his White Day present.

Along with more gifts - for other probable endings of today’s date.

missed a couple days of this bc of my art mock exam but i’m back!! i haven’t drawn these two in agesss so i thought the prompt suited them <3

Akashi was tired; his job, the position he was in, and the burden upon his shoulder. So what should he do to reduce the stress? Calling his boyfriend of 7 years.

A fic where Furihata is stronger, cooler, and still lovable even after 7 years.

Hey hey hey! Happy Valetine’s Day everyone! So as today is the official day I had to write about my favourite pairing in Kurobas, Akafuri! I just love them so much **-**

“I just wish you were here.”

Furihata sighed. He knew these phone calls were never easy, but he did not expect Akashi to say such a thing so soon. Sure, whenever they called each other at some point in the conversation the issue of their long-distance relationship always appeared. But it was weird for his boyfriend to be the one who mentioned it just after picking up the phone. Especially when his voice sounded so weird.

“Is everything all right?” asked Furihata.

“You aren’t by my side,” complained Akashi at the other side of the line. “That is never right.”

“Yeah…,” what was that slurred speech? “Sei… are you drunk?”

The giggle that answered his question confirmed his fears. Furihata cursed under his breath while thinking a reason why his boyfriend is drunk on a Thursday when he knows for sure Rakuzan has an intensive training tomorrow. Mibuchi Reo might not be on the team anymore now but that does not mean she does not inform him of every schedule they had (it all started as a way of making sure Akashi rested but then it kind of became a habit none of them wanted to drop).

“Is there anyone with you? Where are you?” maybe he could call someone to check on him.

“Kouki, you’re so cute when you are worried,” laughed Akashi.

“Mmm, I… I think I’m in my house?” he could hear some rustling. “Yeah, definitely my room, I don’t know of anyone else who has a huge photograph of you hanged on the wall.”

“Sei, don’t kiss the picture just listen to me.”

“But I miss you,” Furihata Kouki never thought there would be a day in which he heard Akashi Seijuurou whine. “We have been together for almost three years and still you are so far away from me. I just want this semester to finish so we can finally look at colleges together.”

The words softened his heart a little. Though he was still deeply concerned for him, Furihata understood what Akashi was talking about. Their relationship had been so rocky at the beginning with barely any time to see each other. Over the months they found their balance, but it was never enough for both of them. However, they had hopes in their university future. Getting on the same university as Akashi seemed impossible for Furihata, mostly because they wanted to major in different things. An also the issue of an Akashi going to the best university according to Akashi Masaomi. His boyfriend, being the sweet thing he was, still believed Furihata had chances to enter the prestigious college his father had chosen for him. But he was more realistic, so he decided to focus on other places that were near and still accessible for someone like him. With that solved, they only had to wait until the last semester finished and they would be together. Or at least closer than they were now.

“Is that why you drank?” Maybe the wait was being too much for Akashi, but it still did not sound like a problem that made him drink. So, there must be another reason for his behaviour.

“No… well, yes, but I don’t want to talk about that,” grumbled Akashi. “What are you wearing?”

“I’m not going to have phone sex with you while drunk.”

“What about real sex? I could pick a plane and…”

And even in his drunken state Akashi was not stupid enough as to contradict his boyfriend. It was funny how most people thought he was the scariest one of the couple. Those foolish people surely had never seen the wrath of Furihata Kouki.

“My father knows,” his voice cracked. “I… I knew he wasn’t going to take it well but I just… I don’t know what he is going to say so…”

His anger disappeared in a second as he heard the voice of his boyfriend trembling while relating the fight with his father. Furihata has always dreaded the day Akashi Masaomi knew his son was not dating any rich personality. And the worst of it was that Masaomi was not even against Akashi being gay, the company even had some adverts about their support to the LGBT+ community. No, the problem was the status Furihata had as an ordinary student. He was never going to be enough for his son and he knew it from the first moment he met Masaomi. At that moment he had been introduced as a friend but Furihata had always suspected the CEO already knew about his connection with Akashi.

“Listen, Sei, everything is going to be alright,” whispered Furihata at the phone. “I’m going to take a train now, okay? I will be there in a few hours and we will figure it out.”

“I’m not going to let him get between us,” there was a threat hanging on those words that made Furihata worry.

“Promise me you’re not going to do anything rash, Sei,” he asked. “We still don’t know his decision so just wait there and I will come to you.”

“Thanks, Kouki, you’re always there when I need you.”

“Sleep, then. When you wake up, I will be there, and you won’t have to miss me anymore.”

“I always miss you, love,” Akashi closed his eyes with a smile on his face hoping the next time he opened a sight of brown eyes would welcome him.

Kuroko no Basuke Only Shop After School Game!