WARNING: This has potential spoilers for both Pixar’s Wall-E and the anime Flip Flappers. Thank you, take care where ever you be, and enjoy.

I like to watch animation, and the reason is because animation is fun for me to watch. *Applause* Thank you… Thank you, you all are too kind.

Most times I get that sense where I don’t feel like doing much else beyond a routine. Wake up, do what you have to do, what you need to do, replenish yourself, back to bed to do it again tomorrow. You could diverge here and there with extracurricular activities, but you slowly feel as though they’re just distractions from what is important. Your sense of direction soon becomes a circular rut, and that is probably what Wall-E faced in his many years cleaning up the Earth. He possesses curiosity with the items he salvages, but things are nonetheless a standard day to day because he has nothing else to strive for, nobody to interact with beyond his cockroach friend that is cuter than any anime girl I’ve seen in years.

This is where EVE shows up to indirectly provide a monkey wrench to the mundanity. It’s a struggling start at first, but when the two come together there’s that feeling that change is in the air. Wall-E can finally do more with someone that comes to at least be respectful and genuinely intrigued with him. Then again, she doesn’t immediately fall for him, EVE has her own agenda and when that means they’re forced to separate, Wall-E takes it upon himself to not let that concern for her linger. As such, the adventure he goes on become as much EVE’s adventure in seeing that Wall-E is just as meaningful to her as the plant she seeks to protect. Where Wall-E is trapped in a rut, EVE basically wants to be in the rut because she feels it suits her. The buster cannon she somehow has perfectly represents her character initially, a shoot first ponder later type of person; cannot truly take the time to slow down like Wall-E. It probably would’ve been just as effective for the two to stay on Earth, but it’s pretty profound that Wall-E helps EVE get out of her mundanity in considerably her natural more automated domain, all while not coming off as insensitive to her goal. It is as much an environmental message based film as it is a romantic adventure about two intrigued lovers finding that mutual bond when they decidedly get out of the rut after finding significant reasons to think differently.

The moment of EVE and Wall-E in the dumpster is one of my favorites in all of Pixar. There is where EVE makes her own decision after Wall-E essentially showed her that it’s possible, after everything he’s done for her. It’s from that moment until after she repairs him back on Earth where we see the drive to not just make him live again, but to return the favor he gave her ten-fold. The love works because they both get to grow as characters.

Then there’s Flip Flappers. Our protagonist, Cocona, hardly dreams for much, at best she’d probably become a teacher’s assistant or worse, a blogger that thinks liking and hating media means having a personality. Now already, this is like Steven Universe Future but far better because with Papika coming into the fray, we actually get to enjoy life a little.

Papika’s first encounter with Cocona is literally escaping a harsh and relentless situation to then fly above Cocona with her surfboard on a bright day; the opening truly sets the tone of the series. The fantasia of Pure Illusion is definitely otherworldly, but it’s not without mortality. Papika and Cocona have their cosmic explorations, yet there is the chance of life and death, especially in the first episode where Papika was more than willing to die just to get her new friend’s glasses back. It isn’t a morbid series, but it can be grim from time to time until we see our leads pull through with the power of their feelings. The two get their victories, have their fun, but as the series continues, the fun and games become harsher to stomach as the reality of everyone involved slowly unravels to reveal that everything Cocona thought was stable to her was bullshit, including her Grandma.

Similar to Wall-E where we feel like there’s no choice but to stick to a routine, Flip Flappers is about how the past can hinder you from wanting to move forward. The more you let the past take hold of you, the harder it can be to understand what’s worth going on. It is only when Cocona realizes her love for Papika in an admittedly trippy flashbackforward, only then when Papika sacrifices herself once again does Cocona take that first step and declare that this isn’t the end of them; there is more to come as they return home together. The connection we see of EVE and Wall-E, Papika and Cocona, feel like we get to be with them with our heads in the clouds, immersed in seeing the couples come together in spite of all because that’s what they mutually choose to go for. Flip Flappers is less grounded of a feature than Wall-E, but nonetheless captures that floaty feel of being there with a special someone. These relationships are built on the idea that thinking forward, especially with someone you’ve come to appreciate, is an eternal opportunity. The theatrical magic comes in knowing that the only direction these characters truly seek to go is up.

As much as I watch and talk about a lot of media, so rarely does a series or film do anything for me beyond distract me from the responsibilities I have in real life. They can have a meaningful message, but most times… I just move on because they’re just cartoons at the end of the day. Wall-E and Flip Flappers both offer that bombastic, memorable, and warm energy throughout their duration, but it’s until the very end where you see how it all comes together. Where the pieces were stacked up only to finally cascade into an awestruck emotionally striking epicenter. And that is when they hit you with something only the best media can offer when it’s finally over:

Not just a strong message, but thoughtful optimism

Phil LaMarr is the voice we all grew up on. Cherish this man 🙌🏽 😢 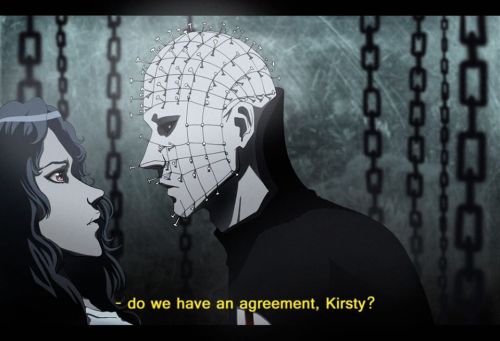 Hey followers! You should all go check out my original animated short film called “an Incredibly Nervous Individual” on youtube and vimeo! Its very creepy and weird, you’d like it. Also if you don’t mind you should share it with your friends who like weird shit too! Thanks!

It got in here…

Seals are so funny, in the water they’re perfect killing machines but on land they’re just fat sausages.

#seals, #pinniped, #sea life, #my art, #my animation, #animation, #this took like 3 months but i'm proud of it
3 notes · See All
mellomadnessText

Hey so I finally uploaded a video on YT! It’s my first completed walk cycle from one of my assignments

Little test of some techniques picked up from a grease pencil tutorial.

A Little Sketchy Animation of Coren and His Eye Changing

#animation
0 notes · See All
Next Page