The struggle is real. I wanna write these but my WIPs are waiting.

Aokise baby wants daddy Daiki to teach him how to dunk 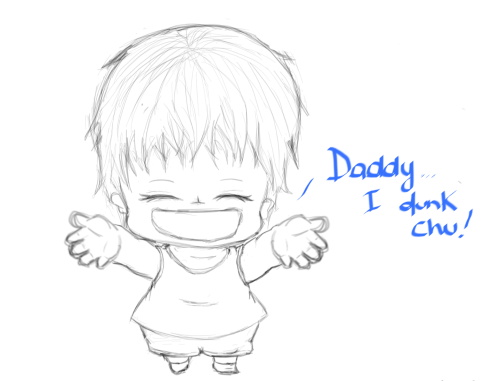 OMG I can’t believe I’ve already finished with this event and I am so happy to be able to participate in this event. Pardon the late post, I am in deep with The Untamed Fandom, I am quite distracted and it actually takes me quite a while to decide on which pairing I am going to use. For this, I’ve decided to use the LDR theme just because I certainly know how it feels to be in this type of relationship. Been there, done that and never again lol But this one comes with a happy ending. So without further ado, here’s the last installment. This event isn’t possible with @vanilla-daydreams and @theuglycrybaby, many thanks to you guys <3

Shintaro stirs from his sleep induced self. The sun rays are peeking through his window as his alarm clock starts to ring. Slowly, he tries to sit up and snooze the alarm, grabs his glasses with his right hand as well as putting it back on his face, also with his right hand. He removes his nightcap and stretches his arms for a bit before standing up and unveils the curtains. It is a nice and sunny day but Shintaro can’t help but feel that this is gonna be a good day for Cancers. Carefully, he goes downstairs and fixes himself some breakfast.

He is living alone in a condominium now for two years after he has graduated high school. Ever since he is a child, he always knows that he has wanted to be a doctor although he has to give up playing basketball. During his last year in high school, he has been offered to go pro to America. However, his father is against it and tells him that he should go to medical school instead of playing on the big stage. He has been heartbroken by that time. The other members of the Generation of Miracles get an offer too. Aomine and Akashi are currently in America playing on the big stage as well as Murasakibara. In Kise’s case, he has decided not to go because it is his lifetime dream to be a pilot so he has persuaded it instead.

Please DO NOT edit, reupload, or repost anywhere without my consent.  I’d really appreciate it.

Goodness, I hope I’m not too late in posting these!

I decided to participate in the KuroBas Valentine’s Day Event 2020!  I wanted to do a piece for each of my favorite ships from the show, so I had to hustle a bit.  But, they still seemed to turn out nice!  It was my first time drawing any of them too.  I only did two days:

I really enjoyed participating in this event even if I was late with the entries.  I hope you all enjoy! 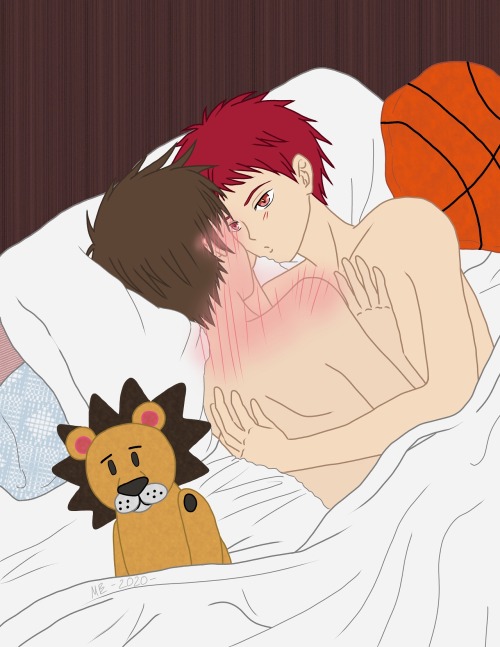 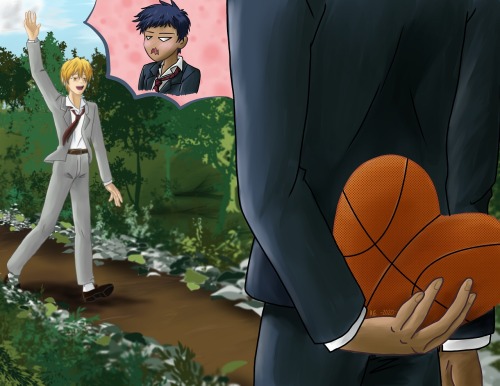 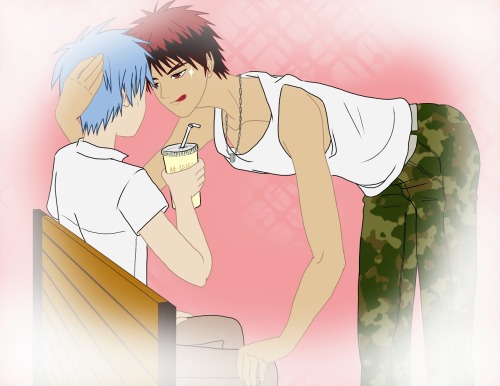 Day 1: Chocolates/I don’t remember having these many hickeys. But I don’t mind. -MuraHimu

Summary: Atsushi is at lost on how to make Muro-chin happy this coming Valentines’ Day until a certain baked good catches his attention.

Summary: For Midorima’s lucky item on the 14th, only Murasakibara can help him.

Summary: Shin-chan is being very difficult these past few days and Takao is getting frustrated.

Summary: Akashi has finally realized that greater things come to those who wait.

Day 5: Kiss/Your lips are so soft. I could kiss them all day. -AoKi

Summary: Having a sweet but a psycho boyfriend is exactly what Kise Ryouta signs up for.

Summary: Kuroko doesn’t know whether to get pissed or be happy when Kagami-kun finally has the balls to ask him for a date with a catch, of course.

“Do you even know how lovely you are, Ryouta?”

Ryouta draws back a little, his expression now perturbed. “You know, I won’t always look like this…”

“No, no.” Daiki cuts him off, pulling him closer to himself, motioning for Ryouta to sit on his lap, cupping his face with both hands so their foreheads are almost brushing together. “I don’t mean physically. And mind you, you’ll always be the most gorgeous in my eyes no matter how you look. But I mean, everything about you…

I’m gonna be out for the whole day and prolly night  tomorrow so I’m posting this now because I love AoKise just as much.

Day 5 Prompt: Kiss/Your lips are so soft. I could kiss them all day.

Summary: Having a sweet but a psycho boyfriend is exactly what Kise Ryouta signs up for.

These past few days, Kise is having his last song syndrome. His sisters have just come home from vacation and the moment they step into their house, they start playing this song that is called, Sweet but Psycho by Ava Max. One of his sisters says that this song is playing all over Hawaii especially at the bars. And thus, after listening to it once, he has decided that he actually likes the song and is actually listening to it every day.

Don’t want to close my eyes

I don’t want to fall asleep

‘Cause I’d miss you baby

And I don’t want to miss a thing

Happy Valentine’s day to everyone!💕💞💗💝💖

Happy lovely day to my friends and aoki shippers💙💛 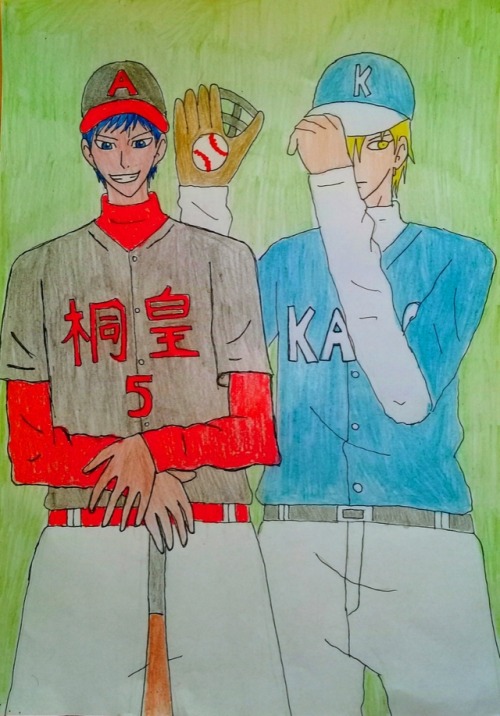 so yeah I dedicate this to Elle since I excitedly told her I love this prompt so much www. I hope you guys love this as much as I love it!!

And I’m so sorry I haven’t went thru the knb event tags today and yesterday!! LIFE HAVE BEEN SOOOO HECTICCC ahhh. i even didn’t hv idea for tomorrow which teh big day ahhh www. But I’ll try my best!

I still haven’t finished my fic bec I write and think like a snail.. But then, doll photo stories are also difficult to do😭🥺. Anyway, this is just to share my love for AoKise and KnB~

Hey hey (●’◡’●)ﾉ it’s the first day for the event!! I’m so excited to draw again and pour all my love to knb fandom especially AOKI fandom ahhhh!! Here take this dumb aoki bun for my first poat for our event 💛💛💛

Vday commission open for only 15 usd per pair 💛 add on third person for only 5 usd. Every payment thru paypal as usual. Please make sure to gv me details or reference for the drawing through dm or you can email me via : bhive0795@gmail.com

With his father neck-deep in gambling debts, Kise Ryouta is driven to a point where he’s willing to do almost anything for money. For what stars have brought him to come across Aomine Daiki, heir to Japan’s largest hotel chain, Kise is determined to make the chance count. But Aomine has an agenda of his own: desperate to fulfill his grandfather’s dying wish, Aomine hires Kise to put on an act and pretend to be his long-lost cousin.

They thought it’s a scheme they can pull off seamlessly, but family and friends and feelings get in the way of their plans.

#aokise, #aoki, #i finally updated, #after a long hiatus, #i still love these dorks, #and I miss them so much, #i miss writing for aoki too, #49k words and counting, #slowburn for real, #screaming to the void
12 notes · See All
Next Page