How Into the Spider-Verse FIXED Miles Morales

may: so you can dodge bullets but not bananas?

peter: maybe i don’t want to dodge the banana.

peter: maybe the banana is my friend

Morgan learns about the other side of her father

Morgan was a teenager now and the emptyness of not having a father was more present than ever. Of course she had her Mum but she was busy running what was on of Americas biggest company’s. She’d seen how other girls at her school interacted with their parents, running to them for help, having the petty squabbles families always come with and the many in-jokes and traditions. Morgan wanted it so bad. Luckily she could take solice in listening to stories about her father, the great Tony Stark, which was only a hazy memory now. She’d asked most people she could think of, her mother of course but asking her would always turn into a lecture about playing it safe and staying on the right side, JARVIS would simply read off of his Wikipedia, and Dr Strange would make jokes and would compare the two of them but no real knowledge was gained from these interactions, none of the stories told her what it would be like to be his daughter. She sat and thought about who she could ask, who would know about Tony’s fatherly side. A light bulb flicked on in her head and she knew where she had to go.

The apartment door was just as Morgan had remembered it even though it was a year since she’d visited. She knocked on the door and a girl, a little younger than Morgan opened the door, Mary Hogan, the daughter of Happy Hogan and May Parker.

“Is Peter in right now?” Mary shook her head.

“He’s out with his girlfriend.” she said in a teasing voice.

“Do you know when he’ll be back?” Mary shook her head again. Morgan looked at Mary and noticed she’d grown several inches since she’d last seen her. She also notice her hand were grubby with baking.

“I’m helping Mum make a gingerbread house, ” Mary said excitedly “Come on in, I’ll show you.” Morgan was dragged into the kitchen where May was delecatly adding icing icicle to the roof of the gingerbread house.

“Look who stopped by!” Mary said loudly, startling May who elbowed the gingerbread house, causing it to collapse.

“Oh hey!” said May, beaming up at Morgan.

“oh, well you’re welcome to stay here! Now if you’ll excuse me I’ve got to get back to work.” May said, frowning at the gingerbread prices.

“I’ll help!” Morgan said. The rest of the afternoon was spent fixing the gingerbread house, some prices didn’t fit so well together anymore but Mary insisted it gave it character. The sun was just starting to set when Peter came home with a lipstick stain on his cheek. The three girls started giggling and pointing, Peter gave them confused looks and turned to see himself in the mirror, his face heated up and he smudged it off on his sleeve.

“You made a gingerbread house?” he asked. “but it’s June?”

“The power of Christmas knows no bounds!” Mary shouted. Peter smiled and went to take a peice off of the roof, May swiftly moved it away.

Peter rolled his eyes as May put it in the fridge. Morgan awkwardly walked up to Peter.

His room was comforting and familiar, it was almost the same as last year. His photography awards were placed proudly on the wall as well as his decathlon hoodie. Somewhere in the room something buzzed and his fan rattled, it smelled of ramen and cola. The feeling of the room wrapped around her like a blanket.

“I wanted to know about Dad.” she said. Peter closed his eyes and thought, what did he know about Tony Stark? There was basic stuff like who he was a billionaire and and inventor but Peter also knew the other side of Tony too; he was a cat person and would try to pet any he came across, he liked sweet coffee but if anyone asked he’d say black, he’d once gotten stuck in an air vent trying to find Clint and he had to be cut out. He opened his eyes and decided to start with the time he tried to make a chocolate cake and ended up blowing up the leftside of the house.

Ned: hey dude when is the english homework due?

Peter: a week and two days after the milk expires

May: and what do we say when we feel like this?

Peter: im going to yeet myself off a building.

HAPPY BIRTHDAY TO THE AMAZING @nathvods!!!!!! This is a fic she requested and she didn’t even know it 😈 LINK IN BIO! There’s a lot of fluff and fun in this one, it was a blast to write. Hope you have an amazing day nath, you absolutely deserve it and ilysm ❤️✨ 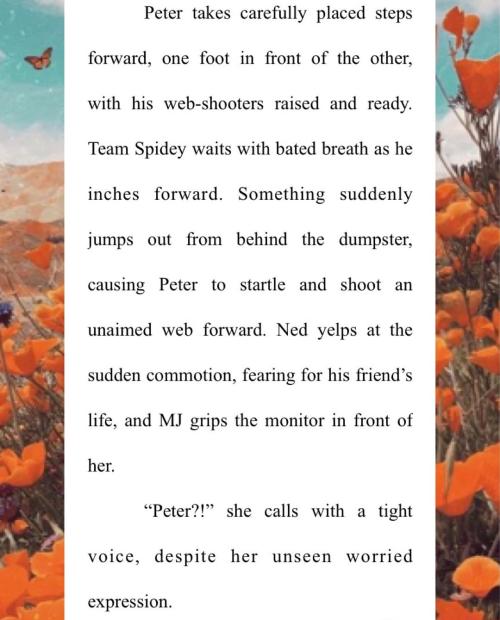 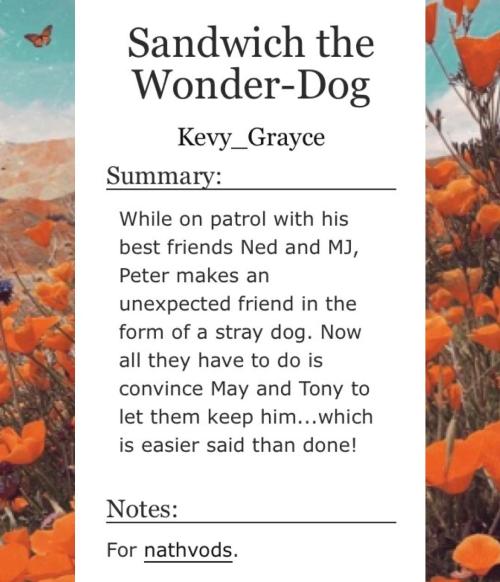 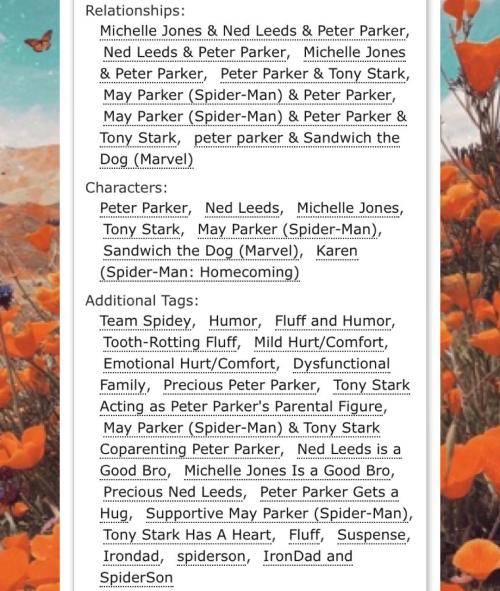 I want that power that I can hold a super huge sword that’s 3x bigger than me. 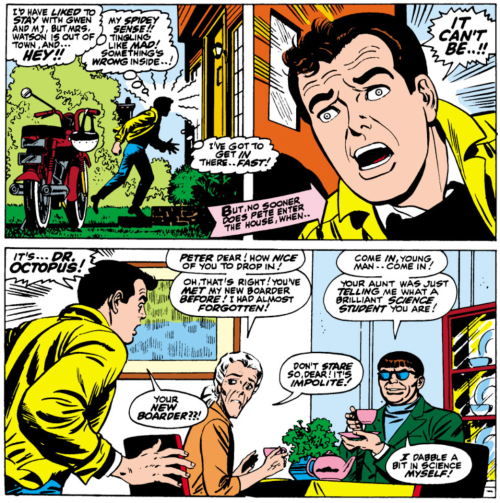 Into The Spider-Verse + Text Posts

They’re really going to make Spider-Man fight some fucking monsters over in the SonyVerse and then have him fight alongside the Avengers against another BigBad in the MCU. They’re trying to fucking KILL HIM, this bitch is NEVER gonna catch a break

“… to become an Avenger”

I appreciate that @aunt-may-anon 💕💗 thank you

The first time, Peter thinks it’s a one-off.  Maybe some leftovers gone bad.  Or just one of those random bodily cleansing things.  MJ said things like that, didn’t she?

The second time, he wonders if maybe he didn’t get it all out the first time.  There’s still a little bit of blue Kool-aid or whatever left in his stomach to splash into the toilet bowl with enough noise to rouse the dead.  Or so he thinks.  Peter’s coughs and retches echo around the tiled bathroom with such a din that it’s a miracle he doesn’t wake May. It’s a second one that he doesn’t wake the neighbors.

The third time, Peter starts to get suspicious.  This is more than just food poisoning or stomach cleansing.  Hopefully it’s not more than a 24 hour bug, because he feels absolutely disgusting, sweaty and shaky, plastered to the bathroom floor with his chin balanced on the rim of the toilet seat.  Peter tries the spread-eagle position for a few minutes, sees if it soothes any part of his angry body.  It’s no better than wadding up into a tiny ball in terms of reduction of nausea, so he goes back to the option that lets him conserve space.  For a bit, anyway.  It had been nice to feel the coolness of the floor on the flat of this thighs and knees.

He supposes he falls asleep, because when the fourth time hits, he’s already in the bathroom, and there’s nothing left to throw up.  Six or seven gags in, Peter’s ready to give up.  “Kill me now,” he mutters to nobody in particular.”

He wipes a string of snot off the corner of his lip, and slowly gets up to hands and knees.  Peter isn’t sure he’s ready for all the way up on two feet, but, if anything, his spider senses will help him stay balanced.

He never thought he’d be glad their apartment was so small, but today, it’s just the right size to put one hand on one wall of the narrow hallway, reach the other hand to the other wall, and ricochet himself the short distance to May’s bedroom.

“Mmph,” she says, when a load of nephew is deposited on top of her feet at the bottom of the mattress.

“Pete? You Ok?”  She fumbles for the lamp and her glasses and looks hazily down at him.

“Can I come in with you?” Peter asks hopefully.

“You gonna make a mess?”

Aunt May whenever she sees Spider-Man:

Peter and Morgan took a break from riding every ride in Disney World to take a family photo. Here is the Iron Family in front of Cinderella’s Castle. Who has your favorite ears? 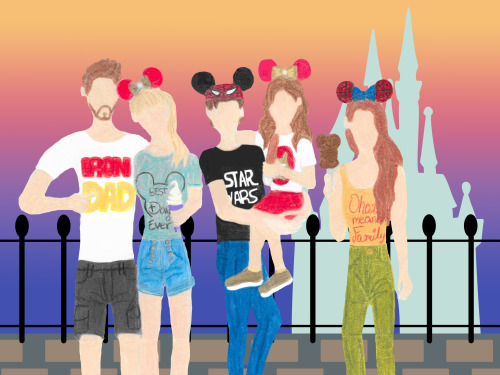 Apparently no one on the internet shares my love for a vigilante!aunt may au which is a SHAME because I need to read smth with it ASAP. I’d write it myself but ew

#this is according to my 3 internet searches, #and ao3 search for 'vigilante aunt may', #i need to get a feel for her character and then maybe ill actually write a thing, #who knows?, #spiderman, #aunt may, #vigilante
0 notes · See All
spidey-swiftAnswer
Can you write a temp blurb (you don't have to EXACTLY do a Canon complaint) but Peter's having difficulty reading and y/N is like lol you need glasses old man and Pete's like NO I don't I'm Spiderman and Mays like Yes you do LMAO

“Hey, can’t read?”, you teased him as he squinted in front of the book, his brows furrowed, “Pete, you seriously need glasses.”

You laughed, “So? Spiderman looks cool with glasses, trust me”, you kissed his temple, “Why don’t you get them already?”

He rolled his eyes, “Spiderman may look cool on glasses but Peter would look like a nerdy dork if I wear spects! Everyone would make fun of me!”

You pouted, “Are you insane? Babe, you’d look super hot with glasses, May - what do you think?”

She hummed in affirmation, “Go for it Pete, it’s better than having you run into walls all day!”