Lol people, very late on that Endgame Feels Train. Here, have some suffering for your needs. :)

He was right there and-

(ash in the air on his hands in his lungspeternoplease)

“There’s nothing you can do, we must leave-”

Where was he supposed to go, where was Pete-

There was nothing to take with them.

There was something left behind on Titan. And something else died there too.

(ashes ashes we all fall down)

WAIT! Howard Stark meets Tony Stark (Howard Potts) in End Game when Tony travels back in time. Tony asks Howard how far along his wife is. Which in my mind is a really weird question to ask. BUT then the kid turns out to look a lot like Howard Potts AKA Tony (because it is him but Howard Stark doesn’t know that) AND Howard didn’t question it??! Howard didn’t go up to his wife and be like I met a guy a few years ago and he looked a lot like “our” son! How did it not ruin Tony’s parents marriage?!? SOMEBODY HAS EXPLAING TO DO!!

Okay, so, something that I never understood about Avengers: Infinity War is: why did Thanos just wipe out half of the universes population? People are still going to reproduce, he’s not stopping future overpopulation. He won’t be around to “fix it” the next time it happens, so who does? That is easily one of the biggest and most obvious plot holes of those movies. But what if it wasn’t a plot hole?

Thus a theory of mine was born.

What if it was intentional? What if, there was more to Thanos’ plan that we didn’t know about? What if with the snap he created something to ensure that the universe stays completely balanced?

Right before Bruce snapped everyone back to life he said “Everyone comes home.” He didn’t say to completely undo everything that Thanos did. That means that if Thanos did do something else, it wasn’t undone. That there’s a possibility that Thanos has a failsafe somewhere in the universe and it’s still active.

For those of you who don’t know, Galactus is a God-like villain who consumes planets. In the comics, Galactus is essentially a universal force to sustain balance. What if Thanos somehow created Galactus with the snap to ensure that the universe never gets overpopulated again?

This has apparently been sitting my drafts for…too long, so here we go.  One of the other disappointments this year, for me.

Was this an amazing movie, an incredible conclusion to a massive saga? Absolutely. Did I love it? Nope. This was not my favorite Marvel movie.

But, I will start with the stuff that I did like.

1. “That is America’s ass” - in many cases, the humor in this movie was on point. Steve in general was just a hilarious character for much of the movie.

2. The all-female team up during the final battle. Fuck yeah. More of that.

3. The final battle in general, where it starts out with Iron Man, Thor and Captain America and then we bring in all the new Avengers. And “Avengers - Assemble!” Perfect.

4. Thor and Cap trading Mjolnir and Stormbreaker. Love that it paid off.

7. Morgan Stark - and Tony getting to finally have closure with his father.

Most of them felt too casual. Or the lack of resurrection. It would have been equally as possible for them to have brought back Gamora, Vision, Heimdall, Loki, and so many other characters as those who were snapped.

Also, while I understand that Tony’s saceifice was noble and beautiful and a hundred other things, it also felt like a betrayal. I want to leave a movie feeling satisfied. And I didn’t feel that when I walked out. I felt drained.

Natasha’s death was…idk.  Dumb.  Kill off one of the most popular characters just in time for her to get the movie we’ve desperately wanted for years, so now the movie takes place in the past and there’s no hope of seeing her in any future installments…fun?

2. A lot of 180s/disappearing plot points/things that made no sense.

Old Steve…okay… I guess I get what they tried to do, but the whole thing just doesn’t work on so many levels.  Most of them logical, but eh…

3.  Turning beloved characters into nothing more than jokes.

The Avengers movies before this always left me feeling satisfied when I walked out of the theater.  The heroes saved the day and defeated the bad guy and everything worked out in the end.  While I understand that sometimes sacrifices are made and sometimes people die, the way some of those choices were made in this movie weren’t in keeping with the spirit of previous Marvel movies…and it really left a bitter taste in my mouth.

After being burned by Endgame I’ve read the TROS spoilers and feel like a complete fool again. I asked my boyfriend why we haven’t got happy endings in 2019 and he said, “because there are no endings anymore.”

I’m tired of putting time and energy into films and tv shows and getting hurt in the end. I don’t want to subscribe Disney+, I want a satisfying conclusion. I’m taking a break from everything and plan to retcon 2020 into a year where Tony Stark and Ben Solo live and GOT season 8 didn’t happen at all.

Take care of yourselves folks. Make your own stories full of hope cos no one else is interested in telling them anymore when we need it most.

I will never forgive Avengers: Endgame for just glossing over Natasha’s death. And then giving Tony a full blown emotional death and funeral.

I just love Loki in Thor: Ragnarök. His character development was amazing and I’m so mad that The Russo’s killed him and brought back the 2012 Loki, who doesn’t have the same relationship with Thor.

Both deal with cap, actually, but ones from CATWS and the other from Endgame 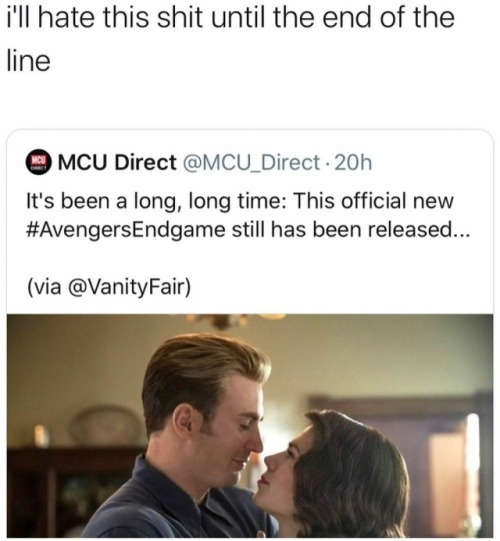 #avengers endgame spoilers, #avengers endgame, #peggy carter, #Steve Rogers, #If I see one person bashing Steve or Peggy over the writers bullshit I will end you
1 notes · See All
realtalkswithfinnText

For anyone who has managed to watch or partially watch the deleted scene from Avengers: Endgame

Tony Stark meets an older version of his daughter [in the afterlife(?) / soul realm(?)] after using the infinity gauntlet.

Just like his daughter, Morgan, said to him, he tells her he loves her 3000.

And I am crying. I wish they had included this in the movie! They have a couple deleted scenes that are just so good! Why didn’t they include them?! Ugh!

But I’m crying. It hurts so fucking bad. It was like watching him die all over again. It hurts! 😭😭😭

Owner watching it die in their hands because they lost the charger: 😫

It is cracking me up how well this fits.