listen, bagginshield au idea that’s been in my head and i dont think im gonna actually write it

set sometime after erebor has been reclaimed, this is obviously an everyone lives au, thorin has been sick for a while, but no one can figure out what’s causing it. so they call for gandalf. who decides to bring bilbo along with him, and bilbo is basically like “im not a healer” but gandalf just waves it off, besides, he has friends he hasn’t seen in a while, isnt that right?

#pan shut your mouth, #bagginshield, #the inherent eroticism of caring for another person
10 notes · See All
bisexualthorinText

you ever just…… spend hours thinking about thorin and bilbo 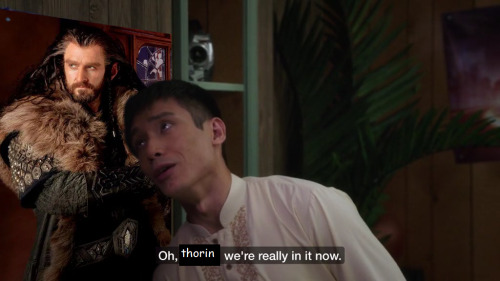 “Small but fierce” has officially surpassed “The Herd of Durin” in number of subscribers making it my most subscribed to work!

To celebrate, I posted an extra chapter for all you baby!Bilbo lovers! Enjoy this little reward for being so wonderful! 😁🥰

They were so gay and in love… FUCK

#the hobbit, #hobbit, #the hobbit bilbo, #bilbo baggins, #the hobbit thorin, #uncle thorin, #thorin oakenshield, #bilbo, #thorin, #bagginshield, #thorin x bilbo
87 notes · See All
badskippyLink
It Was Always Going To Be You - Chapter 7 - badskippy - The Hobbit - All Media Types [Archive of Our Own]http://archiveofourown.org/works/17966861

Thorin Durin wants to find his One … but he is giving up. Bilbo Baggins has no intention of settling down … as far as he will admit it to anyone. It’s funny how something two people want is right there all along … but somehow keeps getting missed.

The rest of the group was converging on the walkers, knives drawn and ready as the dead began to spread out.

A gunshot cracked across the street, and one of the walkers fell as a bullet tore through its head. Thorin spun towards the source of the noise, eyes widening. He hadn’t heard a gunshot like that in years.

The group scrambled for cover—around the corners of the buildings, behind cars—even as the walkers trailed after them. Thorin ducked behind the barrier of vehicles and shot another walker before it could fall onto Nori. There was no point in bothering with stealth, not with a sniper on the other end of the street.

I feel like it’s my duty, after watching a Movie/TV show and falling in love with a ship, watch a fanvideo of them on YouTube… with sad music.

Note: Boom! Look who’s back! :D I’m sorry for taking so long to update, but I’m back now and we’re back on track! Also, a huge thank you to BeaverHatsAreTheCoolest who was kind enough to make some epic fanart for the story! You can check it out here: https://archiveofourown.org/works/21840778

Bilba sat sandwiched between Cerys and Ori and tried to focus on the movie. She was idly chewing on her thumb nail, a bad habit she’d mostly broken and only reverted to in moments of high anxiety.

Her eyes flickered to the door, but it remained shut.

What in the world was keeping him?

It wasn’t so much that she wanted Thorin to come back, as much as she wanted to stop stressing about him coming back.

“Popcorn?” A giant bowl full of fluffy kernels appeared under her nose, culled from the small kitchen area behind them. Bilba hadn’t realized they even had popcorn back there, but Ori had sniffed it out with laser focused efficiency.

“I’m not really hungry.” Bilba pulled her legs up and wrapped her arms around her knees. At Cerys and Ori’s urging she’d gone and changed back into her nightclothes and pulled a robe on before returning to sit on the couch.

“We should totally have a spa day,” Ori said, eyes going to Bilba’s bare toes where they were braced on the edge of the couch. She toed off her slippers and held out her hands to reveal her fingernails and toenails were painted with a very pretty pink and gold floral pattern.

“Maybe,” Bilba said non-committedly. She rested her head on her knees. On the television, the main heroine had just met her love interest in classic romantic comedy fashion, by spilling a full cup of coffee on him. “You ever notice they only react to getting a giant coffee stain?” she asked absently. “Isn’t the coffee fresh?”

Ori’s eyes narrowed. “That is so true. He should be screaming in pain from the burns.”

“Less romantic,” Cerys said. “How did you two meet? Oh, I spilled coffee on him, versus I gave him second degree burns and permanent scarring.”

“True,” Bilba conceded. Inwardly she cringed at the thought of someone one day asking Thorin how they’d met, officially, and him responding with the story of her almost getting him killed and leaving him with bruised ribs.

Not that she was suggesting their story was anything close to a romantic comedy, or that she had any intention of falling in love with him. Just that…if someone asked…and… there were parallels…and…and she was just going to stop thinking about it now.

The door opened and Bilba jumped. Her arms tightened around her legs and her toes curled into the cushion of the couch.

Hey I’m looking for people to rp with. I usually do ship stuff and I’m open to (but not limited to)

Reddie (I’m open to either role)

If any of these strike your fancy message me!

Chapter 198: Sweets for the Sweet

Welcome back, friends, to a new episode here at Dwarf Telenovela Central.   After getting yanked through a tankard of ale, Ori is hoping for some peace and quiet.  Hope springs eternal…  Please join us again next Friday for more excitement!  Same dwarrow time, same dwarrow tunnel!  Keep those cards and letters coming, friends!

guys i’m really fealing the bagginshield. so much pain and yearning.

(This turned into a color study that I’m too lazy to finish, sorry) 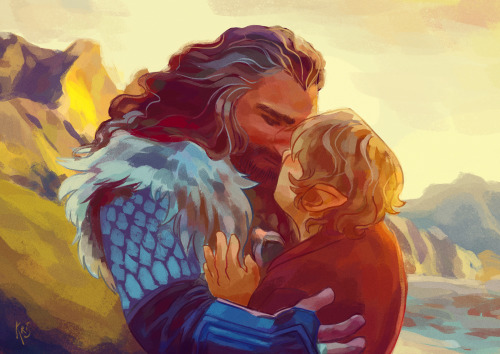 #bagginshield, #thilbo, #the hobbit, #tolkien, #thorin, #i sketched this up this chrisrmas and the fact that i even started coloring is a win, #my art, #krisart, #fanart, #art, #lotr
518 notes · See All
indefinitelyindiaAnswer
♥️♥️I absolutely love your Thilbo fanfic Consequences of Courage it's Soo good! What do you think your upload schedule is going to look like in the future. Should we expect more chapters to come? ♥️♥️

Hello! This is the absolute sweetest - you should definitely expect more to come, as it is my New Years resolution to finish that bad boy once and for all (and I have a dormant 4K chapter waiting for editing right now). I’m currently smashing through the next chapter of a Reylo fic that I’m currently writing but expect to see more of Consequences soon! ❤️

it’s been over 5 years and “plant your trees, watch them grow” still makes me cry

#the hobbit, #battle of the five armies, #botfa, #thorin oakenshield, #thorin, #bilbo, #bilbo baggins, #bagginshield, #thilbo, #the hobbit is forever, #the saddest softest thing, #im still surprised i didnt get this tattooed on me, #almost did, #too sad lol
398 notes · See All
lindirs-gazeAnswer
'so which scene in the hobbit trilogy should have smash cut to thorin and bilbo lying naked in bed together' - you should never underestimate dwarves

ok this is SUCH a good answer

THANK YOU FOR COMING TO MY TED TALK

#like those post sex smash cuts you know what i'm talking about, #i feel like the vouching scene or acorn scene are both strong contenders, #bagginshield, #the hobbit
50 notes · See All
Next Page