Me for months because of the way Dean has been acting towards Cas: unexceptable behavior. Irredeemable qualities. I vow to disown this man if he doesn’t fix that attitude

But like what if when Cas was saying “you don’t have to say it.” It was because he knew that if he heard Dean say It (he was gonna say I love you, don’t fight me on this.) he would be happy and the Empty would take him🤷‍♀️

“Ever since we buried Cas-“

EXCuse mE BuT I neVEr WaNt TO heAr thOsE WorDS AGaiN

Beemoov Really?? We have a problem with colors and outfits!!!

So Cas is still doing his binge watching which at first was cute until you realize he’s only doing it because after everything that happened he’d trying to escape and he is too afraid to leave the bunker right now. He goes back to watching t.v. when he sees Metatron. Cas goes after him and demands to know about the Darkness. Metatron tries to play a few mind games accusing Cas of beign broken, of being weak. Too bad he chose the wrong time. Cas isn’t so much afraid as angry and the one responsible for much of what he’s been through is standing right in front of him. Cas beats on him and Metatron finally tells him everything that he knows. That Amara isn’t just a random entity that God had dealt with, but his older sister that he betrayed and sealed away so that he could do what he wanted.

Then you have Crowley. Crowley royally fricked up with Gaven, and he couldn’t figure out what exactly to do with Dean or how to treat him. However he is starting to figure it out with Amara. He approaches her, tells her he has no idea how to form a connection with her, and he determined just what kind of relationship he wants with her, which in this case is a father and daughter relationship. And for her part Amara decides to humor him and give him the time he’s requesting. At least up until the moment that he proves he can’t keep his end by the evidence of Dean standing in her bedroom.

Meanwhile Sam and Dean are looking to see if there were any more victims of Amara’s when they find one. They learn that Crowley is with Amara and killing the soulless bodies she is leaving behind. Dean uses his knowledge of Crowley from his time with him to help them to break in. Why Dean has a recording on his phone from the six weeks with Crowley where Crowley is losing his shit on Dean for his extensive bar tab is beyond me but you know what, I’m not complaining. It’s kinda funny honestly.

So Sam and Dean split up and Sam finds himself struggling with overpowering the demons. Sam is trying to keep to his new policy of not using lethal force, but it is so much harder to capture things then to just kill them. Sam is able to capture one but then one over powers him and tries to kill him. Sam is forced to kill him and it eats at him when he can’t save someone. Earlier he was upset that one of the vessels they were dealing with was already dead. Crowley did mention before that a lot of the souls are already dead and are just demons using the bodies. Then we have Sam getting more visions again from his mysterious helper? We learn later that isn’t the case but Sam realizes that whoever it is wants him to do something he doens’t think he can do, and that is to reach out to Lucifer again.

Then we have Dean who is facing Amara and Crowley. Crowley explains that over the years it hasn’t been that he doens’t want to kill Dean, it just was that he coudlnt’ actually kill Dean. He labels it as a bromance, something Dean is not impressed with, and decides that this time it’s different. This time Dean is coming between him and his daughter figure so he can actually kill Dean. However Amara decides she won’t allow that. Dean is so off balance here because I don’t think he ever considered the possibility that Crowley would genuinely try to kill him after everything nor that Amara would want to protect him. Amara reminds Dean that they can’t hurt each other and Dean is clearly shaken by that. Amara mentions that Dean is the first thing that she saw, her first experience with God’s creations. In a way Dean is a representation of everything that God created, everything she was sealed away for. She is fascinated by it but she is still furious, which is understandable. Amara’s torn feelings are an important point all season.

So we have three very off balance and messed up boys trying to stop the world from falling apart around them and none of them know what they are doing. Sam is getting visions of his torturer; Dean is being pulled in two directions by whatever strange connection he has to Amara and his own feelings; and Cas is trying to deal with all the trama that has recently happened.

So did everyone else notice how Future Dean was saying everyone they know that’s left alive loses someone they love, and ends up going buck wild and getting themselves killed because they have nothing else to live for? They’ve seen what the monsters do to their loved ones and they want revenge.

But not Dean. Because dean didn’t lose Cas. Not forever at least. Dean didn’t even drop that box in the ocean, he buried it. And I bet you anything it’s somewhere close by to ‘keep an eye on it’, in case Dean finds a way to fix Cas. But whatever you do, don’t imagine Dean visiting that grave to talk to Cas, telling him how much he misses him and how close he is to finding a cure even though it’s a lie. 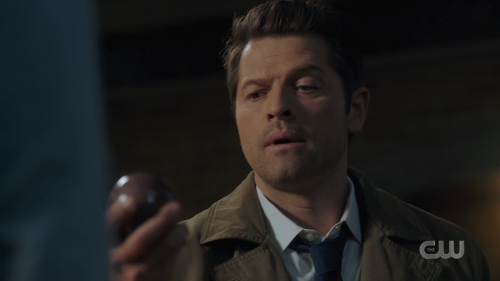 I’m glad he used the singular pronoun to talk about his feelings. Just in time for my funeral.

Honestly, the craziest thing for me about Supernatural is that in the first season they are like:

“Okay, we have to kill this one demon except no one in the history of EVER knows how to kill a demon”.

And then by the 10th season they are already like:

I finished Ninety-one Whiskey, read all of Be Tender With Me Now, and saw 15x09: The Trap all in the same day.

I am an EMOTION.

I guess we’re missing a kiss.

I decided to make a comic book for you, if there are a few likes and subscribers, I will post a continuation of :)

#destieledit, #deancasedit, #spnedit, #destiel, #spn, #deancas, #dean winchester, #castiel, #supernatural, #mine, #my gifs, #this has probably been giffed already like thousand times but i had to gif it too, #surprisingly this scene wasn't as hard to color as i beforehand thought
24 notes · See All
spnsmileText