My mum is taking me to a.. nature medicine kinda doctor tomorrow.. I’ve been to a couple of them and nothing’s really ever helped but sure, I’ll go. She’s paying so.. I guess it’s worth a shot. This one is actually the one who told me I was celiac and that I needed to get it properly diagnosed, when no traditional doctors would even test me, and he was right. It’s a bit of a drive tho, and I have to get up two hours earlier, and it’s already a quarter past four in the morning. I’m neither pessimistic nor optimistic, I’m just neutral to the whole thing. We’ll see.

Going gluten free and Im in the “detox” zone. That shits real man.

This was delicious and certified GF tho.

Bought individually wrapped fruity Mentos at the dollar store… I’ve had fruity Mentos tons of times, no need to read the ingredients… just bought them. Glanced at the list after I’d opened (but not eaten) one…. wheat syrup is the second ingredient. These are Brazilian Mentos… which contain wheat. Seriously?!

#celiac disease, #celiac, #celiac problems, #if I had eaten that, #it would just cap off this crappy week perfectly
1 notes · See All
gethealthynotslimAnswer
Before the diagnosis of being a celiac what were your warning signs?

The thing that got me to actually go in to the doctors was the extreme fatigue I was experiencing and what is commonly referred to as ‘brain fog’. I was sleeping around 16 hours a day, only just managing to get up and go to class for a few hours before returning to bed. Brain fog is the term for how you just can’t think straight - I was so out of it I would get halfway through a sentence and totally forget what I was saying.

These symptoms come from your body’s inability to absorb nutrients because your villi are so severely damaged from the autoimmune response your body has to gluten (where it sees gluten as a pathogen and basically tries to attack it and… in doing so, lowkey destroys it’s own means to absorb nutrients). It feels as though you haven’t eaten for weeks.

I think my coeliac had been going on for a fair while before I went to the doctors because my symptoms were very extreme. It’s more common to have bloating (which I also had, but thought was normal as it was so normal for me by that point), stomach issues (either end!), stomach cramps and feeling lethargic/low energy.

If you have any suspicion that you could have coeliac disease I would recommend going and asking for a blood test immediately. It is super easy to test for coeliac and even if they don’t find that you have coeliac this may allow them to identify another issue that could be making you feel tired (i.e. a vitamin deficiency). If the test comes back ‘negative’ you can also consider cutting out gluten and seeing if this makes you feel better - some people are intolerant to wheat and/or gluten without having coeliac disease. But you mustn’t cut out gluten before getting a blood test as they can’t pick up a positive result if you haven’t been eating gluten every day, it’s much easier to test whilst you’re still eating gluten than going off it for awhile, feeling better and having to go back to eating gluten (and feeling v rubbish whilst doing so!) in order to test.

I figured cheating on the whole celiac thing for one day at Disney would be fine.

#celiac, #i am stupid af
1 notes · See All
arctic-handsAnswer
So I realized after typing it out that "well where do you live" sounds Hella creepy but my point was that if you happen to be in the northeast of the US, theres a store called Ocean state job lot that has tons of super cheap food (they're an overstock reduced price type store) and they regularly have gluten free cookies, crackers, pasta, even baking flour and such. Obviously still more expensive than regular stuf but likely way cheaper than elsewhere

I actually must have not gotten the first half of the ask, but I’m not shy about the fact that I live in Maryland. I don’t get out of state too often, sadly. The cheapest place I can find so far is Aldis, but it’s mostly pasta and boy am I sick of gf pasta

Two of the most painful hours of my life. Would’ve called an ambulance if I hadn’t known what’s up.

Hope the worst is over and it’s not just a brief break.

🕉 💚♻️🔋All we need is Love! All we ever asked for was respect & understanding! These days I am in your face because I want to protect other Human beings, our Animal Kingdom, Mother Earth and our Children’s Future! All I want back from you is to work together to respect! Nobody gets younger but we can rejuvenate and strengthen Love first to make our existence stronger and worth it! Hugs kiss kiss Jennifer Kisten (Miss Fauxy) 💋🌱**************************************
#girlslikeus #instaphoto #instadog #crueltyfree #instamodel #veganist #fashionista #plantbased #lotd #ootd #travel #vegan #veganshare #beauty #photography #sustainable #celiac #fitness #organic #body #fashion model #influencer #straightlgbt #intersex #interseks #transgender #plantaardig #instagirl #instafashion (bij Hilversum)
https://www.instagram.com/p/B8RKJQEpMgL/?igshid=11j8256f7uad8

According to SeaWorld because I have food allergies and can’t eat in the park I have to pay for a picnic locker and walk all the way outside of the park to eat anything. With a disability affecting my mobility that is not doable.

So we’re cancelling our passes. A basic accommodation of a small lunchbox is apparently too much for them to handle.

Made blintzes with potato+tapioca flour mixture and they turned out great!

I love soup. My boyfriend once asked me what kind of soups I like and I started naming soups and he was like “Oh OK so you like CHUNKY soups.” And I was like well yes, but actually I don’t like the way that sounds when you say it. So anyways, I famously love a chunky soup, but this ridiculously smooth cauliflower masterpiece now holds a very special place in my heart.

I hate to be one of those people who can’t actually give you an exact recipe, but it’s really easy to make soup and you can make it however you want and that is the beauty of soup. Here is a rough idea though:

Basically you cannot screw this up. (I believe in you.) Just sauté the onion and garlic in the butter. Then add your stock and cauliflower and cook it until…it’s cooked? Then, blend the hell out of it with an immersion blender. And if you are sort of insane like my boyfriend, you can then run all it through a mesh strainer to make it EVEN SILKIER, but tbh I don’t know that it’s necessary.

Top it off with a drizzle of olive oil (purely to make it look fancy) and some GF croutons if you please. (I made mine in the toaster oven with Trader Joe’s GF Multigrain Sandwich Bread.)

That’s it! A smooth and creamy soup that even the chunkiest soup lover can enjoy.

Photo & croutons by me (@celiacandsalty on IG)

“She says she has celiac disease? How do even know that’s for real? I bet she just likes the attention."⁣⁣
⁣⁣
"She’s not gonna get sick from someone using the same freakin’ kitchen utensils to make her food. Stop exaggerating."⁣⁣
⁣⁣
I have celiac disease…and these are just two of the comments I heard about my illness last year.⁣ 🙄
⁣
Back when I was first diagnosed, I was fortunate to never be bullied and only rarely disbelieved about my disease or dietary needs. Maybe partly because, well… I 𝘭𝘰𝘰𝘬𝘦𝘥 sick. ⁣🤷🏻‍♀️
⁣
But here’s a few facts I hope far more people realize in 2020 👇🏻👇🏻👇🏻
⁣
Celiac disease - and other chronic, invisible illnesses - don’t go away. ⁣
⁣
I may look healthier…but I’m 𝘴𝘵𝘪𝘭𝘭 chronically ill. ⁣
⁣
And looking “healthy” doesn’t make my invisible illness 𝘢𝘯𝘺 less real. ⁣💁🏻‍♀️💁🏻‍♀️
⁣
To read the blog post that inspired this caption, click on the direct link in my profile or type “exaggerating” into my blog’s search bar. ⁣
⁣
Then tell me in the comments: have you ever struggled to make people “believe” in your invisible illness? ⁣🤔
.⁣
.⁣
.⁣
.⁣
.⁣ #celiacdisease #autoimmunediseasewarrior #celiaclife #butyoudontlooksick #coeliaclife #spooniewarrior #autoimmunewarrior #glutenfreelifestyle #glutenfreeblogger #chronicallyill #spoonieprobs #chronicallyfabulous #spooniecommunity #spooniesupport #noglutenhere #disabilityblogger #celiacsofig #invisibledisease #glutenfreelivin #chronicillnesswarrior #glutenfreefollowme #chronicallysick #noglutennoproblem #coeliacdisease #eatglutenfree #nocrumbsplease #invisibleillnessawareness #chroniclife #autoimmunediseases #myglutenfreelife via Instagram https://ift.tt/2RWc4Ew 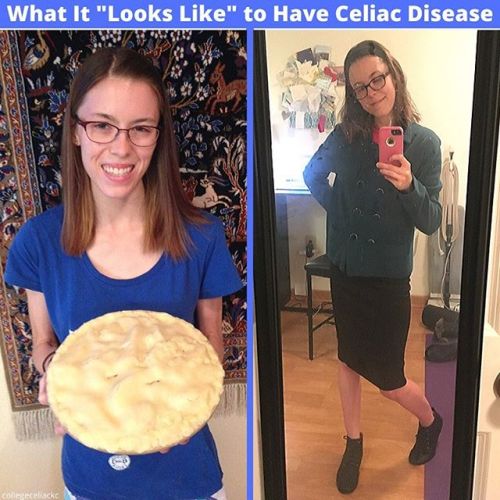 Having Celiac disease is liking having my very only personal Department of Homeland Security, dramatically over representing and misattributing threats and creating widespread misery “defending” me from them.

Ughhh I got glutened yesterday and it was 100% my fault and I just feel like shit today.

#celiac, #celiac disease, #celiac in college, #why am i such a dumbass honestly
1 notes · See All
meishafindingbalanceText

You know its gonna be a good day when you shit your pants at 6:30AM.

#celiac, #graves, #this is why i shouldnt eat gf food other people make for me
21 notes · See All
cptsdceliacText

I wish I wasn’t just a comorbid condition mess