Izuku always thought the day that Katsuki treated Izuku’s apartment like his own would be a good day. A joyous and momentous occasion, one he’d cherish and hold dear.

Yet here he was, horrified and panicked.

AKA: They take it to the nest next level.

Training camp has nothing on Katsuki’s strict sleep schedule. But Deku’s embarrassing ass sure does.

no but hear me out –

Given but with BakuDeku & Mirio x Tamaki

My gift for the @ktdkvalentines event for @darkkurama!! Just two school boys in love. 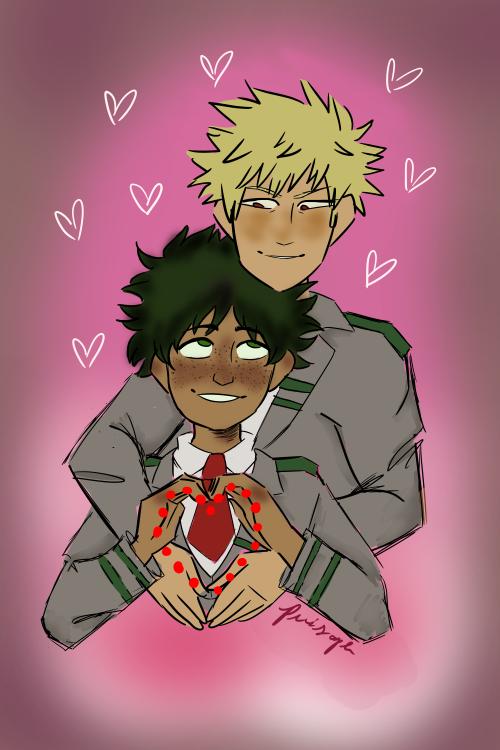 Fellas is it gay to kiss your rival before marriage 😳🤔

Izuku: Todoroki, could you pass me my top? It’s in my room I think

Todoroki: He was in the Kitchen

Explanation to the draft:

soulmarks mark a deadly injury you’ll receive before you die (or you’ll survive, but your life will change)

the more your soulmate loves you, the bigger the mark, the harder the injury

a person with a quirkless soulmate does feel their soulmates feelings, but the place in which they do varies (mostly internal organs as lungs, stomach, and heart)

soulmate senses exist, but the people with quirkless soulmates have an even stronger soulmate sense and can reach a level of protection that is considered going feral (partly due to knowing their soulmate will die before them)

people with animal features (or animals with quirks) also have soulbonds, but the probability of it being with someone outside their species is extremely low

(Further explanation to all these things will occur)

After re-reading chapter 9, i made some chunky edits to aid in the flow of the chapter!!!! i had rushed through my usual editing because im a taurus and i was stARVING at the time, but im much more confident in the chapter now and i encourage another looksie before chapter 10 rolls around!!! thank you!! <333 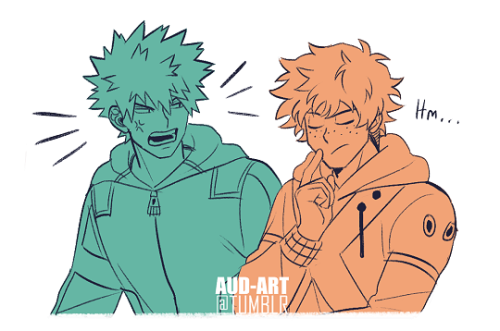 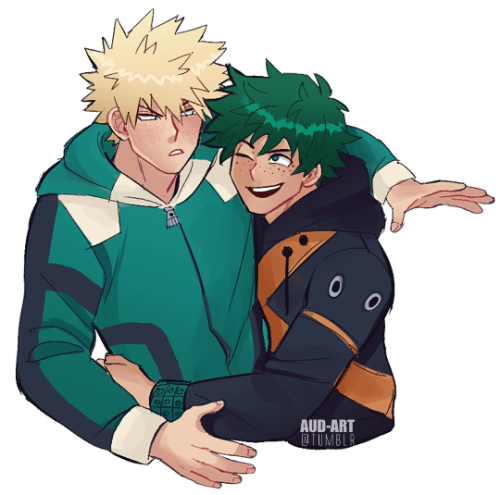 #bakudeku, #dekubaku, #bnha, #bakugo, #midoriya, #deku, #fanart, #lowkey hoping someone writes fic about this--
601 notes · See All
bkdkinkAnswer
I love how Katsuki's kiddo is just as feisty as him, and it's so cute that it tries to beat the shit out of katsuki for touching Izuku. Like father like kiddo.

BDHSHSHSVSSUSHSHIZNSJS The apple doesnt fall too far from the tree!! 😂😂😂 thank you!!!!

Drew this for my fic [X] 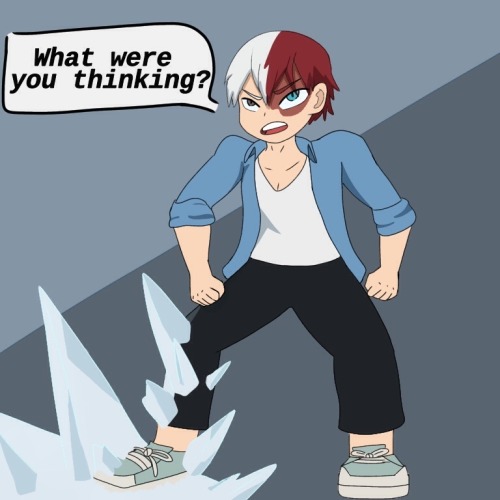 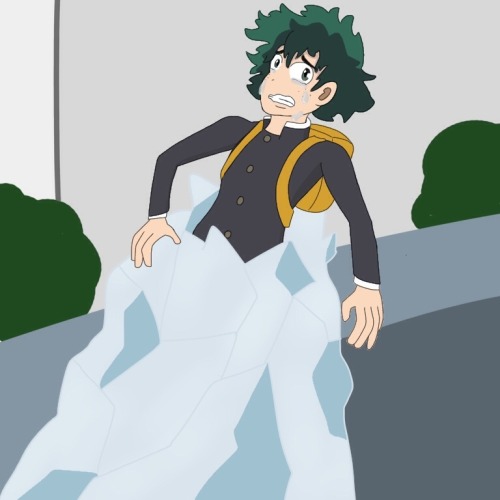 This is @insinirate. Deku i ask to cosplay they make amazing bakudeku art and there vailau is awsome so go cheak them out and hope u guys like my coaplay 😊😊😄😄

also me: sees someone talking bad about bkdk

unfortunately, me again: BUT ON THE OTHER HAND!!! IF YOU LOOK AT IT LIKE THI

#bnha bkdk, #bkdk, #bakudeku, #dekubaku, #bakugou x izuku, #bakugo x midoriya, #bakugo x deku, #i was suppose to be a tododeku shipper, #i left the show like yeah tododeku i like, #then the fandom fucked me the hell up lol
100 notes · See All
idolheroduoText

“Is everything alright?” The photographer chimed in.

Izuku jumped a little before he looked over and nodded “Y-yeah. Everything’s great.” He smiled before looking over to Bakugou “But Kacchan can you get off me?” he whispered.

Katsuki then got up, looking to the photographer in a very flustered state “Let’s just continue. “

After the photoshoot, Izuku ran after Katsuki after he started to head home “K-Kacchan- wait!”

“What is it, Deku?” Clearly still flustered from earlier, the pro hero folded his arms.

“W-well… It’s just been so long and uh… We’ve both taken such different paths… “ Izuku teared up a little, handing the hero a note “I-I’d appreciate it if you’d go see my show tomorrow night. It’s gonna be on an outdoor stage at Akihabara. Just hand this t-to the bouncer when you arrive and they’ll get you a space. “ He started to cry.

It started to get cloudier.

“De-“ Before Katsuki could even say a single word in response Izuku ran off.

It started to pour it down.

Izuku just ran wherever his legs were taking him. He didn’t care about how soaked he would get in this rain. He just couldn’t face his response at that time. He’d get his answer at the show tomorrow- that was his logic.

It was at that point that the idol took the time to look at his surroundings. He knew exactly where he was as soon as he looked around.

A ball hit a young Izuku on the head, knocking the child over “Ow… “

“Izuku, you can’t do anything right, can you?” A young Katsuki looked down on the young Izuku.

It just started to rain more and more. Izuku started to cry even more as the memories came flooding back. He missed him. He missed him a lot. He tried his best to just forget about his feelings but now he couldn’t ignore them.

He was in love. With Katsuki Bakugou.

Izuku snapped his head around upon hearing a familiar voice.

“K-Kacchan?” Tears rolled down the idol’s face as he watched the blond run towards him.

The blond soon caught up to him “Why’d you run off like that? When the hell did you get so damn fast?” he looked to Izuku before realizing that he was crying. The hero’s face was then painted with concern that Izuku had never seen on him before. “Are you okay… Izuku?”

Izuku teared up even more. At this point he didn’t even know if his face was wet from his tears or from the rain that was only getting heavier.

“Kacchan… I think it’s about time for me to show some honesty. Some honesty… About my feelings. My feelings towards you. “ Izuku sniffled, giving the hero a weak smile.

“F-feelings? What are you talking about?” Katsuki looked to the idol, furrowing a brow.

“W-well… We’ve known each other since we were tiny. And I’d always thought that you were great. No, amazing. When your quirk developed I was even more amazed. I wanted an amazing quirk like yours. But I never got one. But I still admired you. Even when you picked on me. Even when you called me names. Because you were my number one hero. But now so much has changed. You’re the number one hero and I’m a globally popular idol. But… Even though all of this has happened… I still admire you. Hell, I even made my idol name a different spelling of the nickname you gave me. And even though you really are the number one hero this time, you always were and still will be my number one hero… Because-Because I love you Kacchan. I always have.” Izuku felt more and more tears roll down his face as raindrops fell onto his face from his hair.

Katsuki’s eyes widened. He didn’t think that this was how Izuku felt this whole time. In all honesty, the blond was under the impression that Izuku hated him after everything that he did to him and how he treated him.

“K-Kacchan?” Izuku started to shake as the wind blew his hair.

A pang of guilt filled Katsuki’s stomach. He was this nervous because of how he had previously treated Izuku. He had hurt him when all he wanted to do was distance himself from him. He knew that it would just hurt more. He then wrapped his arms around Izuku.

The idol quickly tensed up at the sudden touch.

“De-Izuku… I’m so sorry… I never meant to hurt you. When I found out that you were quirkless I knew that we couldn’t become heroes together. So I tried to distance myself from you early so that it would hurt less but you just stuck around no matter what I tried… And it just ended up hurting more as U was hurting you time and time again but you kept that damn perfect smile on your face all the time. “ Bakugo gripped onto Midoriya’s clothing. “I’m so…so damn sorry… Please forgive me… “

“K-kacchan… “ Izuku pushed away the hero so that Katsuki was holding his shoulders. “I never held a grudge. Not even for a second. “ He smiled before moving his face nearer to his and putting his lips to Katsuki’s.

The rain then started to calm do

Here’s another preview for a scene in the upcoming chapter coming out this week. 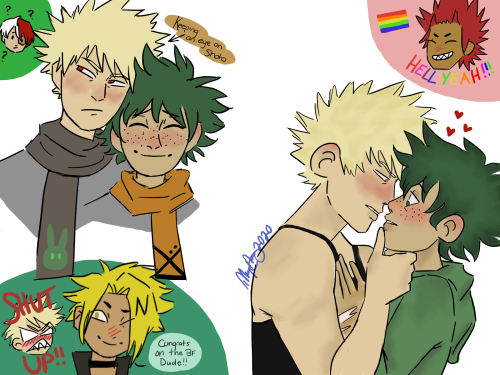 I made a gacha edit of a scene from the first chapter as my art skills are lacking but I still wanted to visualise it!