I need to yell about my feelings for Klaus Hargreeves and Dave Katz and 1x07 The Day That Was in general so I can form a Coherent Thought TM  and finish this barber shop meta.

Five: We need a distraction. Are any of you good at jumping up and down and making annoying noises?

Klaus: MY TIME HAS COME

The Umbrella Academy as Cards Against Humanity Combos

Can anyone recommend me good tua fanfics. I’ve read so much 😭 I can’t find nothing new 😂

So, here’s a list of Umbrella Academy characters and the food they would be in some alternate universe:

Diego: Uh, probably Doritos. Either that or like, sharp cheddar cheese.

Allison: I definitely see her as a cinnamon roll girl, 100%

Five: Tiramisu for sure

Cha-Cha: Something about her is making me lean towards celery. I have no idea why.

I’ve done it. I’ve found the tweet that perfectly sums up Five’s personality:

Do you eve just jump to the occasion to talk about umbrella academy like:

Someone: Can you hand me that umbrella

Me *comes out of nowhere*: Did you know that there’s a comic called umbrella academy and that it was adapted into a Netflix show. I’ts about seven siblings with super powers who try to save the wor-

Notes: idk how I feel about this one but hopefully you enjoy it

I would like them to use the same exact songs but put them in completely different contexts.

Dancing In The Moonlight becomes Luther and Allison’s break up song.

I Think We’re Alone Now is played when they go back in time to Reginal’s funeral again, this time working together.

Istanbul is played when Five fails at a fight, but then his siblings step in to help him.

Summary: What happened to Five after the Apocalypse was stopped.

A/N: And here I go with the 1st chapter. I honestly have no idea where I’m going with this so bear with me. Also thanks to @evelinaonline​ for agreeing to beta this series, you’re a life saver. 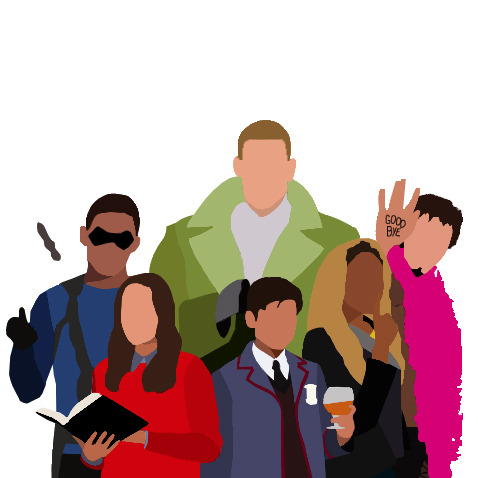 Request: Hey there! Can I request an umbrella academy fic where the reader is number 8 and was closest with Vanya growing up? Years then go by and they drift apart. But when they reunite reader wants to be like a sister to Vanya again. Also the reader has the power of pyrokinesis!

Ahh i keep on meaning to write for Vanya so thank you @billhaderstrashbag​!! <3

Comments are much appreciated!

Swinging your legs off the edge of the tiny beige bed, you can’t help but smile.

The room was small, neatly made, with only a straight backed chair, a small bureau without any mirror, and a desk in the corner by the slit window. There was a pair of drapery curtains, no pictures on the stone walls, but it was nice - stifling, but also familiar. With the two of you in the room, you had made it feel like home.

Vanya kept a few little knick knacks by her bed: a little heart and a silver crane you had made for her, a picture you had snapped of the two of you (although she kept is slightly hidden - if Allison found out that you had stolen her polaroid camera from her drawer you’d never hear the end of it from Luther), a gold necklace you had bought her for her birthday.

It was her favourite possession, the half heart of the best friend locket, the other half which you had hung around your own neck. Well, her favourite except for her violin, of course.

She stood by the foot of the bed, her eyes scanning the notes that rest on the stand, one foot in front of the other. A look of total concentration covers her face, not noticing Klaus run past, ducking as a knife hits the edge of her doorframe.

‘Diego, what the hell, scheisse!’

There’s something about the way the violin sings that sets her heart into the deepest of symphonies, deeply harrowing and torrential in the way it encompasses her body. Its slender strings caress her fingers, its curves are tenderly traced under her palm, and to her, nothing in the world can possibly compare to the sense of empowerment which is achieved with the most marvelling mix of notes.

You close your eyes as you listen, allowing the flames to bounce leisurely along your fingers as you begin to sway to the notes. You don’t even notice she had stopped until you hear Vanya shouting.

Glancing to your side, you watch the sunlight stream through the gap in the curtains, bringing the hope of a new afternoon. Though the window is closed you can smell the roses just outside. A smile spreads over your face. It isn’t the fragrance of those blooms you detect, but rose perfume on the drapes; Vanya always did like to bring something of nature into her room.

It took you a moment to see the flames, before Vanya had grabbed a blazer from her wardrobe and fanned them down with a panicked expression.

‘Vanya, I’m so sorry! Ohhh Reginald’s going to murder me.’

‘It’s fine… he never comes in here anyway’, she murmurs as she slides down next to you on the duvet, ‘I’ll just ask Grace to get me another pair from the attic. Or I can do without, I enjoy waking up to a rising sun. Makes me feel… less alone, I guess.’

‘You’re not alone, idiot’, you say with a giggle as you bump into her shoulder, ‘I’m right here.’

‘And you’re not? I don’t know anyone else who can play the violin that well. You don’t need powers to be extraordinary, Vanya.’

You wrap an arm around her shoulder, allowing Vanya to snuggle in. ‘You’re the only person I know that gives extreme hugs.’ You snicker in reply,  ‘well, it’s because there’s nowhere else I’d rather be.’

In that moment your arms squeezed a fraction tighter and Vanya breathed more slowly, her body melting into yours as every muscle lost its tension to the cold air. This was life, real life.

She never thought she’d be this happy again.

Your umbrella is a splash of colour on this sweet greyscale day, a day when one could feel as if they had walked in an old noir novel. Your hand curls around the handle, and the canopy stretches above you as if it were the blossoms of a rainforest.

You stood there together, you and Vanya, at the front of the funeral. Everyone’s heads were down. Maybe it was them showing respect of maybe there were too afraid to look up in case everyone else figured out how nonchalant they were about the whole affair. Vanya was the only one sniffling, although you couldn’t tell if it was due to the rain pelting onto her reddening cheeks, or due to the ashes Luther was dumping onto the damp ground. She looked smaller somehow, hunched, and you felt your stomach lurch as you looked away, You couldn’t bear the thought that this is what she had become when you had left her.

‘I thought there would be more wind’, he adds as he looks around, almost embarrassed.

Klaus’ hand reaches out to grab onto your shaky one, until you slap him away. He only shrugs in reply, placing a blunt into his mouth and managing to light it with the tips of his fingers as Five wanders back inside, an awful look of nothingness in his eyes.

It was done. He was gone.

You managed to make your way over to Vanya, catching her attention with a small cough.

‘I’m sorry Diego was such an ass to you. He’s been a bit cranky the last few days. Luther too.’

It’s crazy how things can turn upside down. You see the person every day and suddenly, they’re gone and when they go, a part of you goes with them too.

‘Do you want to get out of here, get some breakfast? Maybe go to Griddy’s, like when we used to sneak out of my bedroom window-’

‘I know-I know, but still…even if we can’t be kids, I want to be sisters again. Except this time, I’ll actually be a good one.’

Vanya shuffles as she glances at the ground, her mouth slightly twitching at the side.

‘Do you still play the violin?’

‘I’m glad! I’m so glad - I hope you’ll let me come see you practice. That always was my favourite part of the day, waking up and hearing the music through the Academy walls…’

You reach out to place a curl of her hair back behind her ear, letting your hand rest on her shoulder. You can see in her eyes  as she tries to make contact with you, that her brain has built some new walls so she didn’t have to feel so alone anymore.

Her sigh was of a softly deflating; it was as if a tension had lifted yet left her with a melancholy instead of relief. But there was also a glimmer of hope in the spark that flew through her eye.

She reached up to fiddle with her neck, allowing a slightly tarnished locket with the word ‘best’ to land on her rain splashed fingers, finally building up the courage to look you in the eye.

Word Count: 3517
Summary: Grace’s memories don’t work like the memories of humans and she doesn’t have any power over them.