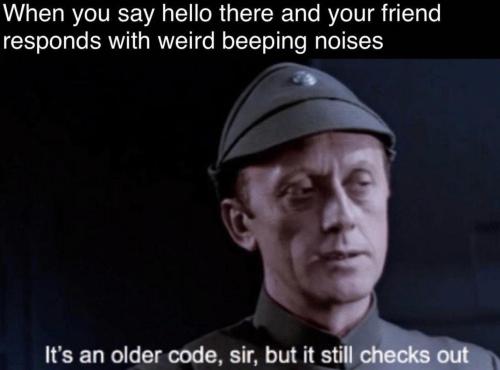 Ahsoka: anakin, if you don’t have anything nice to say, just don’t say anything at all

*me coughing up a lung because of the flu* GeNeRaL kEnObI

(A/N): (Y/n) as a sith lord, are fighting against your enemy Obi wan Kenobi. You two were knowing eachother for long time and let’s say that Obi wan has a slight crush for you.

“Obi wan Kenobi, it looks like we are meeting again.” I said and pointed at handsome Jedi mine red lightsaber.

“Well it certainly looks like that..” he said, while looking in my yellow eyes. He ingnited his blue lighsaber and did a flip closer to me.

I was ready to fight him, so was he. Obi wan and (y/n), Jedi and Sith, we were born to destroy eachother, at least from my point of view…

“Hello There!” he said as he landed. “Well, hello..” I whispered, and smirked. Then we started to fight, red and blue lightsabers were hitting eachother. He was better at fighting than the last time, so was I.

“You improved your fighting technique.” Obi wan remarked and tried attack on my legs, which i blocked.

“Seriously Kenobi? You can’t do any better?” I smirked and nearly cut piece of his beard.

“Whoa..” Obi wan stepped back and felt on his back. I had him there, laying helpless on ground. I could finish him, if i wanted. He would be dead in second. But i didn’t, I just standed there. It wasn’t certain, who was helpless at this moment. We were just there, staring at eachother, unable to move.

“Looks like you have high ground.. You know, when i said then that sith lords are my speciality, I really ment it.” he smirked.

I turned off my lighsaber and asked. “Is this some kind of distraction?”

“You are jedi master, I am sith lord… How do you even think this could work?” I put my lightsaber in holder and offered hand to Obi wan. He took it and standed. “My padawan is married, council looks like they dont have problem with that. I know you for a long time, when we fought last time, we had interesting conversation.” his blue eyes were looking through my soul.

Last time we talked about our childhoods, “Yes, I remember. So..” I didn’t know what to do now.

“Yeah, what should i tell my master?” I asked him. “Well, you will figure something out, you are sometimes too smart even for me.” he smiled and gived me kiss on forhead. I closed my eyes and enjojed the moment.

“Goodbye Obi, can i call you like that?” I smiled and my eyes started slowly to lose yellow collor.

“Sure, and (y/n), you have nice eyes when you are not angry.” he said and run to the escape pod.

I smiled and then left the ship too.

Rex: he was probably hoping he wouldn’t come back