Okay so hear me out??

So I created a chat on GroupMe for,,, idk memes and shit? Anime weebs? Depression? Anonymous discussion of deep fears and secrets??

PM me and join me in my void and be subject to,,, friends

I found this app that someone was using to talk about books called GroupMe. It’s pretty much a messaging app..

The real question is who would be down to start using this with me for good book discussions?

I love having supportive friends

Man this guy came in clutch right before the quiz. Timed 20 minutes to answer essay question and we didn’t even know it

I sure would like if GroupMe actually sent me notifications so I didn’t look like an ASSHAT who responds 3 hours late to everything !!

Repost if you’re interested in joining!! Or drop your group me names!

#group chats, #groupme, #blackgirlmagic, #blackgirlsrock, #blacktumblr, #black twitter, #allwelcome, #girl group, #newfrienship
0 notes · See All
engadget-yahoopartnerText
Sure, we’re still waiting for that Microsoft-Skype deal to close, but it looks like Redmond’s about to get more than it initially bargained for. Skype announced today that it has reached an agreement to snatch up Groupme, the mobile group messaging service that made a splash at Google I/O. Outfit head honcho Tony Bates told TechCrunch that Skype needs to invade the mobile space if it hopes to reach its goal of scoring one billion users, and cites Groupme’s “sticky group messaging experience” as the ideal mobile addition to the Skype family. But don’t take our word for it, hit the break and dig the PR for yourself. Read more
#GroupText, #text messaging, #deal, #Groupme, #GroupMessaging, #GroupTexting, #texting, #buyout, #microsoft, #group messaging, #Skype, #techcrunch, #group texting, #mobilepostcross, #group text, #acquisition, #TextMessaging
0 notes · See All
engadget-yahoopartnerText
Just because Google’s hosting I/O, that doesn’t mean that a few little guys can’t do a bit of announcing on their own. Such is the case with Groupme, who stopped by doing their darnedest to upstage Disco and the host of other group messaging apps flooding app stores these days. The newest build – v2.1.7 – just hit the Android Market over the past few days, bringing with it the ability to share locations /photos and initiate conference calls within the group (amongst other niceties). For now, the service is limited to the US and Canada (though international expansion is “top priority”), and requires that any members have established phone numbers in case the data network fails anywhere in the chain. The good news, however, is that there is a data option, with SMS being used only as a fallback. There’s also some pretty fancy integration with Gigbeat, which is detailed in the video just after the break.
%Gallery-123308% Read more
#GroupText, #GroupMe, #GroupTexting, #android, #mobile, #hands-on, #google, #video, #google io, #messaging, #GoogleIo, #group me, #GoogleIo2011, #group texting, #chat, #group text, #google io 2011, #text
0 notes · See All
the-volar-aspectText

I am so bored.

#this is the content i signed up for, #groupme, #not tumblr, #tungle.com sucks
13 notes · See All
pan-gyaPhoto 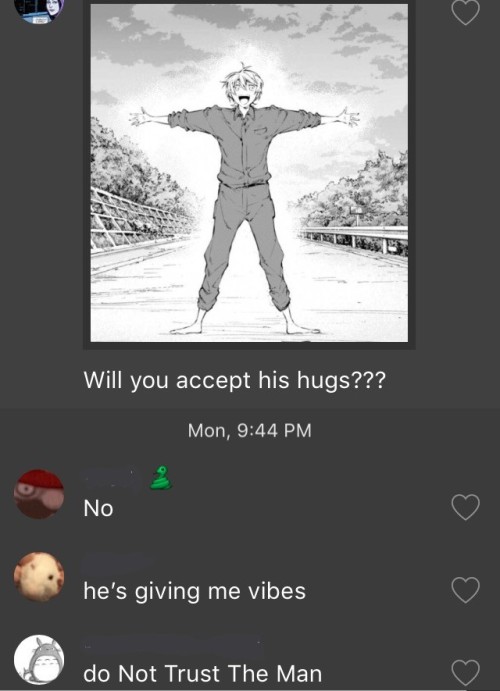 sokka is the anime protagonist girl we deserve

Let’s be specific. Where is Black Tumblr going?

Is there any Black Tumblr group chats out there ?!

If you want to make new friends, link up, FWB, etc…. join this GroupMe chat ✊🏾

#that-scorpio, #groupme, #shoot your shot
444 notes · See All
Next Page