Trending Blogs
#hall of fame
cullText
#999, #hall of fame, #i wanted to make a me irl page, #but then i was like wait idk how to code
3 notes · See All
whitneyehoustonText

A salute to Luke Kuechly, the greatest linebacker of the 2010′s. Football is a brutal sport and while I’m sad to see him retire after only eight seasons, I commend anyone for putting their health above anything else. He’s one of the greatest players in Panthers’ history and a surefire Hall of Famer. Thank You! 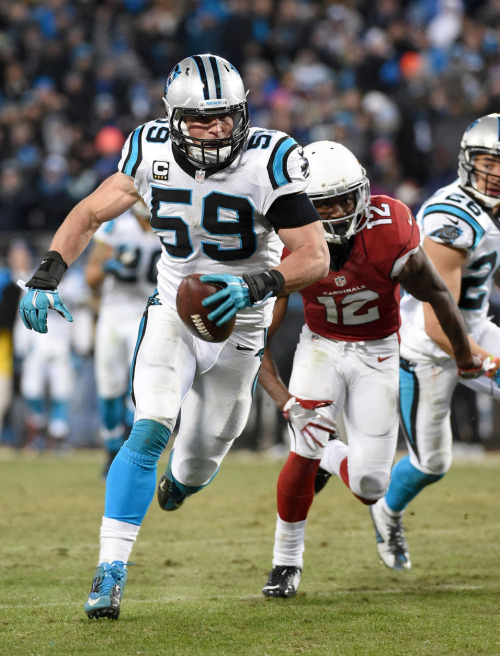 Hall Of Fame The Notorious B.I.G.

We lost a hero and legend today in Rocky “Soul Man” Johnson. Rocky Johnson is the father to Dwayne “The Rock” Johnson.

Rocky is a legend in his own right. Former tag team champion with Tony Atlas; making them the first black team to hold the titles. I love you, Rocky! 😔💔🕊

P.S. just wanted to place a The Rock gif ⬇️

A lot of people have reached about about Drew Pearson today. I’m still not sure what to say. Most people think he’s in the Hall of Fame, anyway. And to us, he is. Just as with the Rock Hall announcements today, it just goes to show that voters of an organization don’t dictate how the people really feel. I know that being a voter in other organizations firsthand. Hopefully this means next year he’ll get in on his own with all of the uproar and not have to go in as part of a group. Drew will always be a legend and no one can take that away from him. #drewpearson #hailmary #mrclutch #theoriginal88 #halloffame #nfl #football #snub #profootballhalloffame

Congrats to the 2020 Rock and Roll Hall of Fame Inductees!

Make what you will of it.

#submission, #thrifting, #giant baby head, #costumes, #hahahahaha, #hall of fame, #where did you get that mewtwo shirt tho
212 notes · See All
pathologisingAnswer
lmao this clown wants to fuck elon musk

#hall of fame, #i do NOT
6 notes · See All
thankskenpendersPhoto 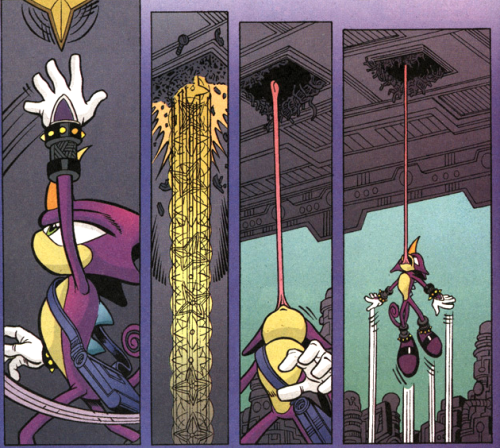 At long last, Tommy Turtle–Sonic’s alleged super important friend who was introduced just to be killed off, and then stuck around for some reason anyway–has met his end

I’ve gotten some comments from folks who don’t understand the hatred towards Tommy. The thing is, aside from the hamfisted intro story where Chacon beats it into your skull that this boring new character we’ve apparently never heard of is one of the most important people in Sonic’s life, Tommy really isn’t that bad in a reread

But you have to put yourself in the shoes of someone following the comics month to month. The comics introduced this new character with no real personality or skills or any defining traits aside from being Sonic’s apparent friend, and then kept focusing on him over and over again. For several years, they kept doing backup stories about Tommy, none of which made him any more interesting. If you were hoping to get a story about another supporting character like Bunnie, Rotor, Amy, or whoever? Too bad! It’s time for more Tommy. And after his reintroduction, he stuck around for nearly three years. Readers probably started to worry Tommy would be stealing the spotlight from more interesting characters for, like… forever

As such, killing Tommy off for good was one of Ian’s highest priority goals upon coming on as writer. This was a character literally created to make a heroic sacrifice and then die. He was never supposed to come back after his introduction story, and bringing him back and keeping him around was only making fans resent him more and more. Still, I have to applaud Ian and Tracy for giving Tommy’s death here so much weight. We might not care for Tommy, but Sonic and Tails are still supposed to. They really gave it their all, even though they knew fans would be happy to see the damn turtle go 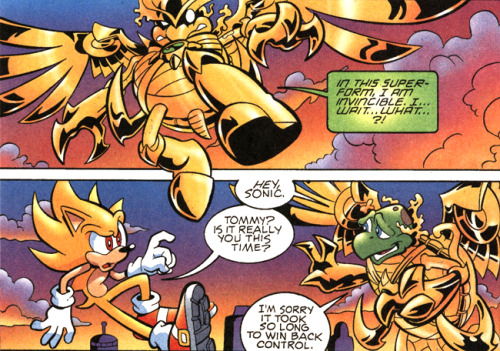 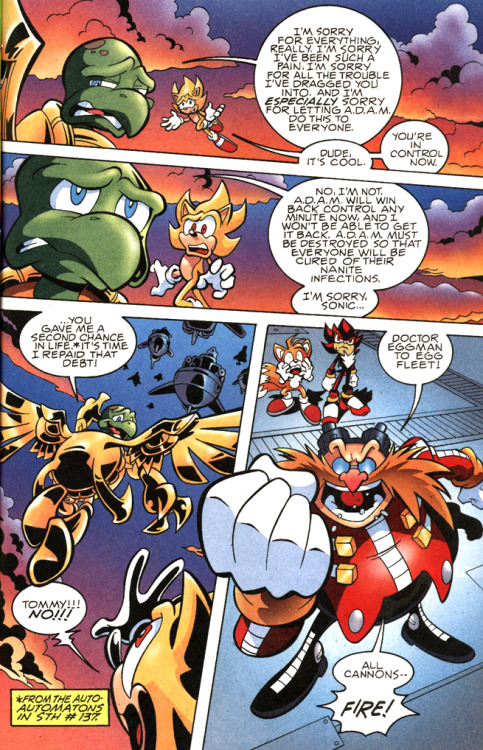 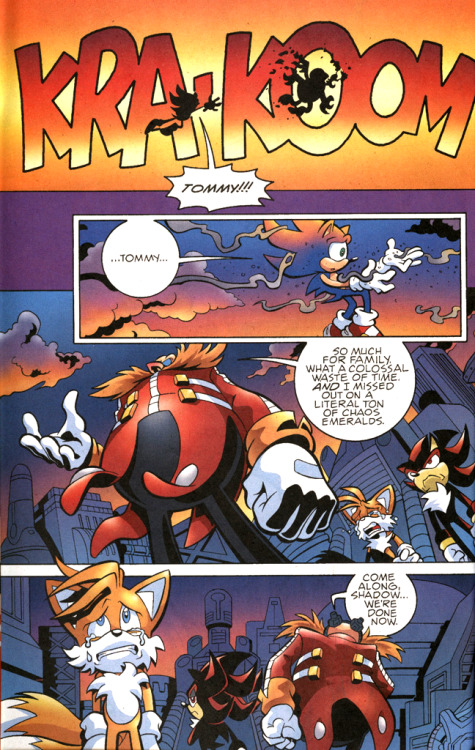 #StH 169, #tkp post, #hall of fame
159 notes · See All
narwaAnswer
Ok so your a gay. Get over it! It’s ok to be gay. You don’t have to act like your a nut all the time! It’s normal to be gay it’s not a bad thing as you perceive. You can’t worry how your family reacts anymore. Acting nuts around them and on your tumblr is just immature and quite frankly moronic. Pick yourself up, shoulders backs, chin up. You’re Gay not insane. It’s ok. Face the world as you are. Leave all the inhibitions behind, starting with this I’ll conceived idea that your insane!

im honestly dumbfounded by this ask I’ve reread it 5 times now and every time my brain deteriorates further. this might just be the reason why i will become neurotypical for 2020. im cured from all the professionally diagnosed disorders that make me what the cool kids call “insane”.

#i am a gay. finally admitted it u_u, #nik speaks, #asks, #anonymous, #hall of fame
6 notes · See All
whatsonyourplaylistVideo

One less, one less problem

When you can’t draw faces. 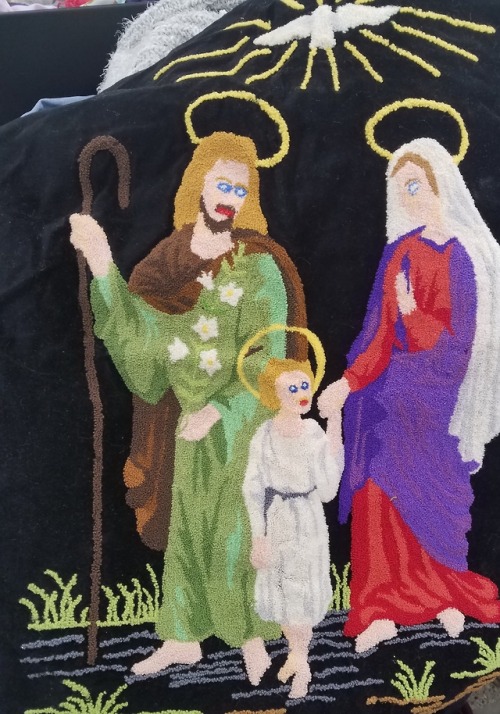 There’s this one lecturer who continues to say the funniest things, here are some samples from the last semester:

#harry potter became something of a running joke after the skin incident, #and seeing how the death of an owl had a bigger negative impact than some character deaths, #his reaction to that was impeccable, #as usual, #long post, #mine, #hall of fame
2 notes · See All
wrestlingatthemoviesText

WWE Hall of Famer “Rowdy” Roddy Piper stars as a police officer caught up in a turf war in a gang run neighborhood. He has until dawn to escape and find his way home or else is girlfriend will be murdered.

Hot Rod’s main action sequences see him running away or shooting but he does take a man down with a mean clothesline towards the end of the film.

2 out of 5 roller blades

A low budget action movie that feels like it should have a post apocalyptic setting as it has such colorful comic book caricatures of characters but is instead just set in a regular but gang ravaged city. The former WWF Intercontinental champion is a good leading man but was clearly struggling physically with lots his action scenes as his running is more of a hobble a lot of the time.