I drew my favorite gal to practice some pixel art!

Please do not repost w/o credit!

Toga: I don’t know how to say this without both confusing you and breaking your disturbingly fragile heart.

last day of @shigarakiweek‘s shigalentines!! the league really does love their boss! 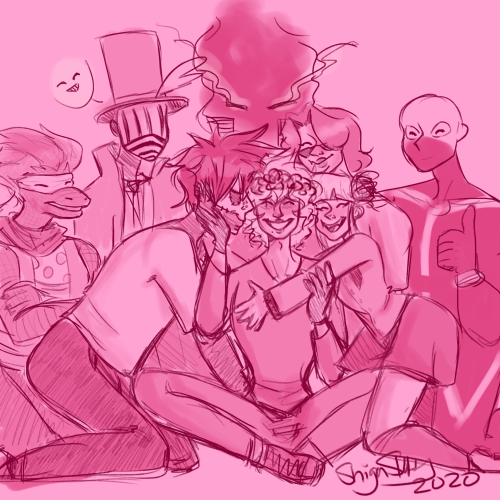 #league of villains, #bnha, #bnha villains, #shigaraki, #dabi, #himiko toga, #magne, #twice bnha, #spinner bnha, #mr compress, #kurogiri, #shigadabi, #shigarakiweek, #shigalentines
94 notes · See All
sleepingobsidianAnswer
(Dabi + Toga, basically siblings) "Y'know, I betcha' you could do more things with your fire if you were better at science. Too bad you're dumb." "And I bet you'd have boyfriends and girlfriends and shit if you were less of a loudmouthed weirdo. Too bad, right?"

If the My Hero Academia characters had theme songs, then this would undeniably be Himiko Toga’s! 😂😂

Surprise!!! This is the only one of my Au’s that I hadn’t started writing yet, so let’s get the wheels turning on this!

~Welcome to the Neighborhood~

“Shit!!!” You jolted off the couch when you heard Magne shriek in the kitchen, followed by the sound of a loud pan hitting the ground. You groaned and rubbed the sleep from your eyes. Magne peeked her head around the corner and smiled at you. “Y/N, sorry! I wasn’t trying to wake you from your nap. It’s my turn to cook tonight and I wanted to get a headstart.” She admitted. You smiled at her and went to stand up and stretch. “Its alright! No worries. I just want to be quiet because I’m not sure how well the new neighbors take noise.” Suddenly the front door slammed open and Toga walked in, hands full of grocery bags that stacked up and hid her face. What was even more alarming than her loud entrance was the fact a complete stranger came in behind her while holding some bags as well. “Uhhhhh, Himiko? I think you’re bring followed.” You said outloud. You heard her giggle and then placed down the groceries on the table. “This is no stranger! I just met him 5 minutes ago and he offered to help me with my stuff. His name is…uh…hmm.” Toga stopped to think while the stranger shyly placed the rest of the groceries on the table.

“Sp-Spinner. My real name is Shuichi, but you can call me Spinner.” Toga interrupted the shy guy with a tight hug. “Thanks so much for your help, Spinner!!!” You walked over and helped him get lose from Toga’s death grip. “Yeah, thank you Spinner. If you want, you can join us for dinner tonight.” You added. His eyes lit up for a second before shortly dying out of their excitement. A realization hit him. “I’d love to join you guys but I can’t. I’m new here and I got a lot of unpacking to do, but listen…I’m in apartment 1206 if you guys wanna hang out after I get settled in.” Before you could answer, there was a loud know at the door. You went to answer it and revealed a rather annoyed looking man.

“Listen, I know you guys just moved in but could you please cut the shit on the dish clanging? I live below you. I’ve gotta pull and open shift in a few hours and I need the fucking sleep.” The patchwork man complained in annoyance. You quickly apologized and bid him goodbye. It wasn’t long afterwards that Spinner went to his own place and you, Toga, and Magne settled down for dinner and small talk. “I ran into a mysterious hunk today at the gas station! His hair was short and he had a medical mask on. God, he was my type, so dangerous!” Magne gushed while you rolled your eyes. “Mag, you know it’s way too soon to jump into another relationship since you literally just broke up with someone.” You tried to add logic to the conversation. Toga spoke up immediately. “Don’t listen to y/n, big sis! She’s/He’s/They’re just being a stick in the mud right now! I say the sooner you get over someone depends on if you have someone to help distract you.”

You rolled your eyes and sighed. Toga simply continued her words. “Anyway, I remember the guy you used to date didn’t have time for you because he was too busy chasing Broadway or something. What was his name anyway…Sako or something? I say you should go for it! Date now instead of later!” Toga said excitedly. She then turned to you and spoke up. “Have you found a place to work lately by the way? I heard the tattoo shop just across the street has an opening or two for apprenticeships. The old guy that runs the counter told me the assistant manager was looking to train someone else. Although I wouldn’t work for the assistant manager because he seems a little creepy and crusty to be honest.” Everyone laughed and continued with small talk. At the end of the night, you were the last one awake because it was your turn to clean up after dinner. When you finished, you heard a soft knock on the front door and you quickly went to answer it just in case it might wake up your roommates.

You opened the door, but nobody was there. You almost went back inside until you noticed the small Tupperware container on the welcome mat. You pulled the note off attached to it, and you admired the tasty looking cookies in the container. Opening the note once you were back inside, you read it softly with a whisper. “Welcome to the neighborhood…try to keep it down.”

You smiled, stored the cookies in the pantry, and headed off to bed.

S??? Toga in her bodysuit again

Toga would see someone hanging out with a person she likes and be like “Are you going to eat that?”

I drew a thing, I need more practice with darker skin tones and I realised I have never drawn Toga so I made this, I think she’s cute

Shigaraki; why? What’s at Olive Garden?

Toga: aww I bet he wants to propose to you, Tomura!

Shigaraki: if anyone ever tried to propose to me at Olive Garden I’d order the soup special and drown myself in it 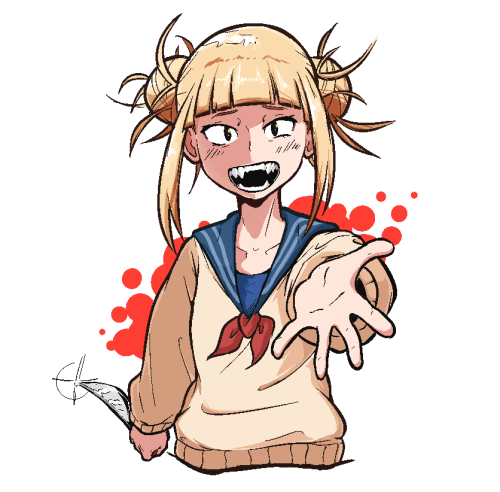