Hey how about you give my baby girl a break!

Shumway secretly orders one of the 100 to kill Bellamy. Meanwhile, hallucinogenic nuts provide Octavia with an opportunity to help the Grounder escape the camp, and Bellamy and Clarke investigate a nearby underground depot, where they find military weapons.

Okay, does anyone want to tell me what the cards say in the writers room cause I really wanna know 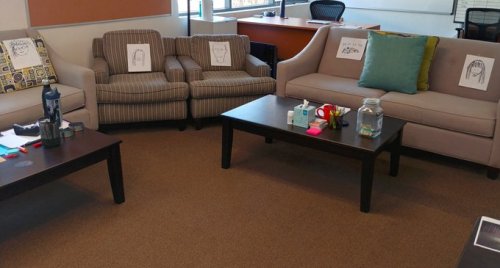 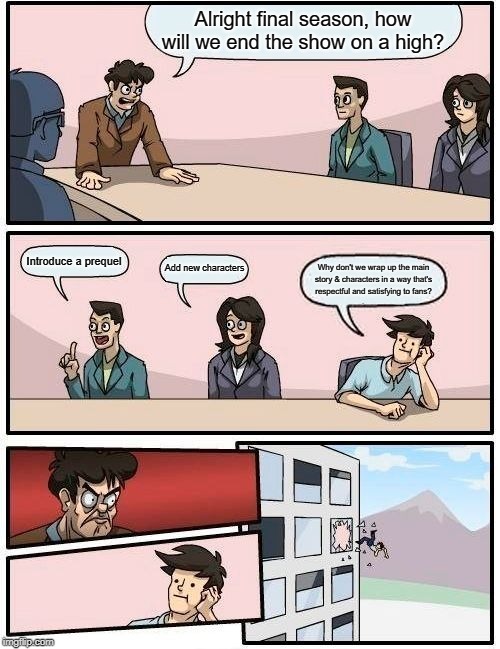 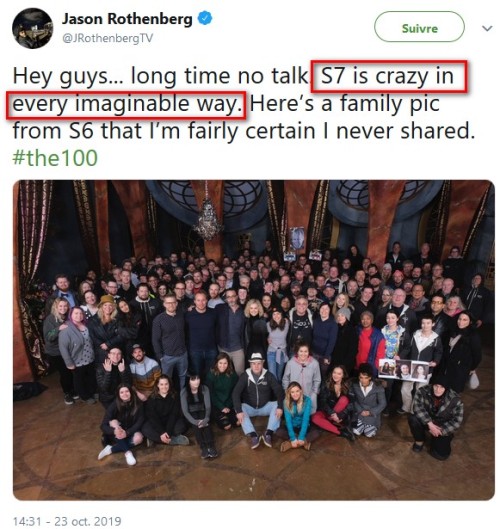 #the 100, #news, #pleaaaaase, #this hiatus is too long!!!, #jason rothenberg, #via twitter
66 notes · See All
octostuffsworldText

I’m missing the 100 right now ,I’m hoping we get a decent ending,knowing Jason we won’t

#the 100, #jason rothenberg
1 notes · See All
rivertalesienAnswer
He's already exhausted an entire audience so almost no one is interested in the prequel. Clexas still haven't forgiven him so we won't be watching, bcs only care about B and C so they'll just move on once t100 is over. The general audience has declined sooo much in the past season that I doubt they'd bother watching a rehash. The CW isn't known for its epic sci fi Odysseys so if he's trying to be George Lucas he's on the wrong network for that audience. Itll be cancelled after 1 season

I can see it being a filler series on their new streaming site, since they’ll want content, but who knows. Regular network, no one pays attention to it, advertisers see no ROI, it will disappear (if it gets a series order at all). Streaming? Different set of rules, still boils down to advertisers.

The BSG people tried a prequel/spinoff with Caprica and it didn’t take off (though I thought Caprica was pretty good), and that was the the Syfy Network.

Funny enough, so many of The 100′s aesthetic and sensibility come from those two shows, but the 100 lacks real depth and insight; he’s either learned something from it or he hasn’t and will pass that on to the prequel.

Meanwhile, there are hundreds if not thousands of really talented people out there who never get such an opportunity and so much original work will never be seen.

All so hacks like Rothenberg can continue to shovel derivative pap that doesn’t challenge anything.

#questions, #jason rothenberg, #the 100, #science fiction, #the entitlement of privileged white males, #failing up
7 notes · See All
rivertalesienAnswer
What’s ignominy? And what the fuck is a backdoor prequel? Also I really just want to go to America and punch a few people

They’re going to tack on the pilot to season 7 of the 100, probably like a coda instead of a finale. It gives them an excuse to not go ahead with it if the reaction is poor and they don’t need a nod from the advertisers unless a series is ordered.

Ignominy is disgrace or dishonor.

#questions, #t100, #jason rothenberg
2 notes · See All
rivertalesienAnswer
He is finally catering to the loud crazies, no surprises there. The fact that he liked a tweet by an old man wanting to watch young adult characters kiss is just so embarrassing.

I have no idea why this would happen or if it is even true; since when has anything this guy ever contributed to in social media turned out to be because oh, yes, that’s happening? He just know hows to string people along and that’s about it.

But I would be very surprised if there wasn’t some kind of narrative tango submitted so they can make the most out of the Happy Couple’s marketing potential with a certain demographic.

[Image description: screenshot of the discord server, user Rach_24601; I will happily strangle Jason Rothenburg with his own intestines.]

They literally had Octavia confirm to the audience that Bellamy loves Clarke and we’re meant to forget that happened?

JR can try a “platonic” and “misinterpretations” narrative outside of the show all he likes.

The show has been feeding us since late season 4, theres only one direction its going in

The 100 opening scene pretty much.

Sometimes I just want people to come along with gif evidence of very specific Bellarke moments and be like, “so Jason, what exactly is happening in this moment, what is the point of this look or transition?” Like, what is that reaction shot of Clarke after Bellamy and Echo kiss supposed to mean? Why is Bellamy staring with an upset, sad face at Clarke dancing with another guy? I honestly want him to answer for how we could be misinterpreting things like that? What is the defense there?

What does this mean?

so noah fence but I can make my own opinions about the stuff I love.

Try not to let others warp your opinions into something unrecognisable. You might see or hear negative things about your favourite character, or ship, or episode, or season. Don’t let it put you off. You don’t have to change your mind just to fit into the crowd.

Love it the way you want to love it.

#bellarke, #jason rothenberg, #the 100, #marvel, #game of thrones, #THIS IS PRETTY MUCH DIRECTED AT JROTH LMAO, #i finally unfollowed him on twitter, #also, #look i literally just rewatched AoS s1 and I had FEELINGS, #i had a really toxic encounter with a friend irl, #TRUE STORY, #a couple of years ago I watched AoS and loved it, #a close friend of mine basically shut it down, #criticised the characters, #scrutinised the plot, #i never got past season 2, #and put me off mcu for a bit, #now i really regret it, #the point is, #don't tell me i misinterpreted things, #i have eyes, #i can see, #it's my tumblr and i'll cry if i want to
37 notes · See All
the100-newsPhoto