Mayuzumi: What are you doing?

Me when I’m asking for a marriage: Akashi-san! Please marry me!

Also me: I mean! Please marry Mayuzumi-san or Nijimura-san! I won’t bother you I promise hehe

akashi: i’ve never lost at anything in my entire life

*flashbacks to winning everything*

i assure you the translation is 100% correct 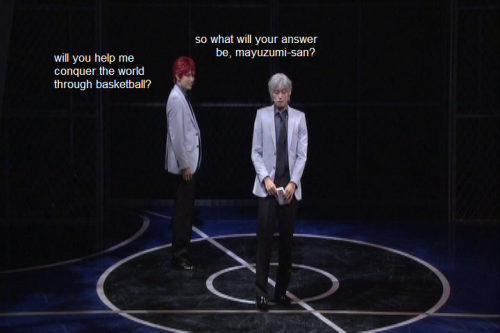 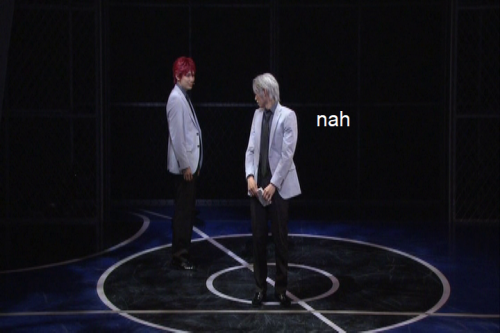 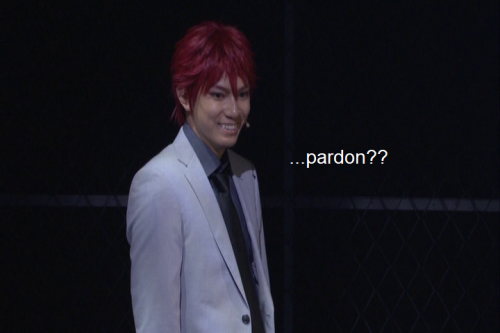 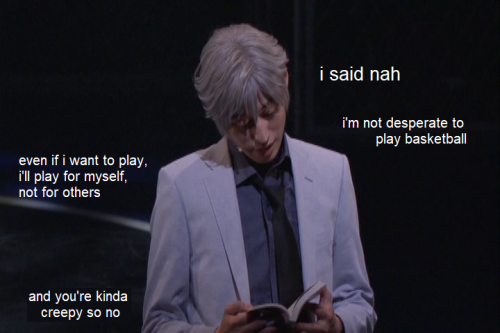 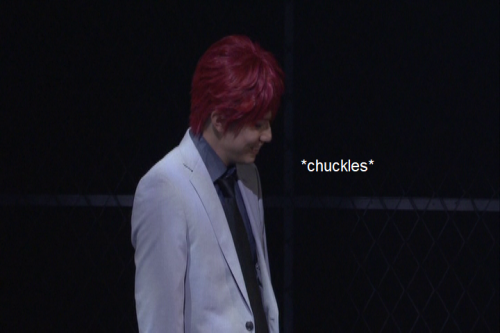 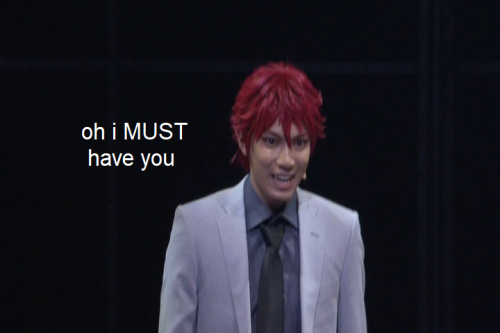 #mayuzumi chihiro, #akashi seijuurou, #mayuaka, #akamayu, #knb, #kuroko no basuke, #this been sitting on my draft for WEEKS asdhajkd\, #i cant believe im still making yandere jokes in 2019 sorry bokushi, #if u think i'll only post stageplay screencaps for myak shitposts ure right, #my stuff, #frost watches kurosute, #YOCHAN IS SO PERFECT AS AKASHI I LOOOVE HIM, #GAKU IS TOO IKEMEN TO BE MAYUZUMI LOL
104 notes · See All
little--frostingText

mayuzumi: got overwritten by kuroko

akashi: hmm that was pathetic. from this point onwards you are no longer a player but a TOOL for passing.

The sound of the rooftop door opening sets off his fight or flight instinct–except it’s a stranger, and he’s not in high school anymore.

The front camera on Akashi’s phone is terrible quality, he notes, and then he realizes that the other has probably never video called anyone before–an assumption proven true when he spends five minutes attempting to show him how to unmute himself.

He wasn’t really that invested in the whole thing (okay, it would be nice to win since he’s leaving, since he gave up so much free time, etc) but practicing for the better part of a year and getting basically completely discarded kind of hurt.

fuck off, he types in response; he should’ve known that it wouldn’t be that easy to rid himself of Akashi–and no, he didn’t want to see him again.

Who the hell are you? he asks, and only much later does he realize how much Akashi needed it.

Akashi texts, Good night. I love you; he elbows him in the side and says, “Just say it out loud, you ruined my combo.“

Shadow metaphors aside, he’s not used to being seen; Akashi looks at him too brightly, illuminates too many parts he didn’t know were missing.

Sometimes it’s like Akashi retracts back into himself, rebuilds year-old defenses, but he’s always been blunt and honest, and they’ve always been ready to poke at each other’s lifelong insecurities at a moment’s notice.

“It’s just me,” he breathes quietly, as Akashi looks up at him, wide-eyed and breathless and terrified.

When he lets Akashi borrow his signed, limited edition cover version of the latest volume, the other gives him a terribly characteristic look of amusement but makes no further comment.

“Two years,” he says, and Akashi nods, looking down at their entwined hands, already thinking of their next meeting, and the next, and the next.

“We’re done for the day,” Akashi announces, then turns to him and, to his utter horror, adds, “Chihiro, could you see me for a moment?”

“This bed was made for one person,” he points out, but Akashi has already curled up against his side (and he finds that he doesn’t mind it too much).

For the first time, he notices how silent the apartment is–on a completely unrelated note, when did Akashi say his graduation ceremony was again?

They don’t talk about family, but he’s heard little bits and pieces from rumors and Mibuchi; it’s enough for him to know not to broach that particular subject.

When he goes to investigate the noise that sounded suspiciously like glass breaking, he finds Akashi in the kitchen, along with transparent shards and fermented fish splattered across the floor tiles.

Seldom does he wake before Akashi, so he takes a moment to scrutinize the dark circles underneath the other’s eyes and gets out of bed as cautiously as he can.

He glances at Akashi a few feet away, dressed in a striped blue yukata, and puts the blank tanzaku back down.

He looks up at the sound of the front door opening—the turn of the key in a lock, the slight squeak of the hinges—and listens for the call of I’m home.

#this is how akashi confessed to mayuyu guys, #on a rooftop... to a senpai... mayuaka invented shoujo manga 😔💖, #mayuaka
13 notes · See All
chocomonkiText

“You could’ve waited ten minutes until I was done.” Mayuzumi sighed as he finished rinsing out the conditioner in his hair.

Kuroko spat out the toothpaste and stuck out his tongue in the mirror when he and Mayuzumi locked eyes through it. Mayuzumi flipped him off good naturedly.

Kuroko finished rinsing out his mouth and he turned around, raising a brow at his roommate. “Your ass was taking too long.”

There was nothing between them but a glass door. In hindsight, they should’ve put up some curtains instead but the apartment already came stocked with glass doors. They just tried to give each other some privacy when showering, although Kuroko had a penchant for walking in while Mayuzumi was using the shower. Mayuzumi couldn’t even lock the door because Kuroko figured out how to open it.

It was the hazards of having a two bedroom, one bath living situation.

Currently, Mayuzumi was stepping out of the shower and wrapping a towel around his waist, uncaring if Kuroko was still in the bathroom. He’d long since given up having any semblance of privacy with his roommate around. “Maybe you just wanted to see me naked.”

Kuroko gagged. “You’re lucky I haven’t had breakfast yet.”

Kuroko casually flipped him off as he walked out, leaving the door open because he knew that would annoy Mayuzumi.

Whatever. Not like he had something Kuroko hadn’t already seen.

Kuroko made a face as he pulled out his phone to text Akashi while he started that morning’s coffee.

Akashi’s texts came in quickly after that.

#kuroko no basuke, #akashi seijuurou, #mayuzumi chihiro, #mayuaka, #akamayu, #music, #look.... i dont know if anyone posted it yet i just wanted everyone to Know, #i've been waiting one hundred years!!!!! this gift from above, #they sound so good together ;A;, #every time i think i'm over them something new and stupid happens, #between this and kurostage twitter all my old feelings came back with a vengeance
32 notes · See All
wshxnPhoto 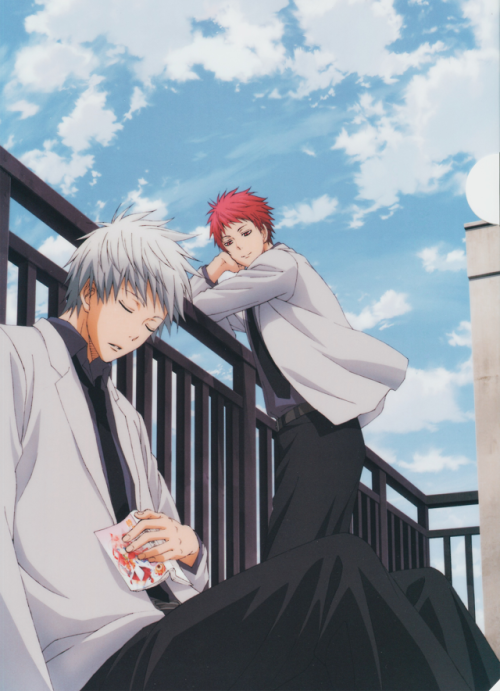 “I’d like you to meet one of the new recruits,” Akashi says finally, after he’s done sorting through the piles. He smiles down at Mayuzumi and holds out a roll of newspapers. “Not today, mind you, but well… you’d be so kind as to help me put these back in place first, won’t you?”

“Hell no,” Mayuzumi replies, but he does so anyway like the fool that he is.

‘i’m fine where i am right now,’ mayuzumi mumbles, half-asleep, but very much aware of how akashi’s touch lingers in the curves of his jaw, his lips ghosting in the shell of his ear. mayuzumi sighs contentedly. ‘perfectly fine.’ 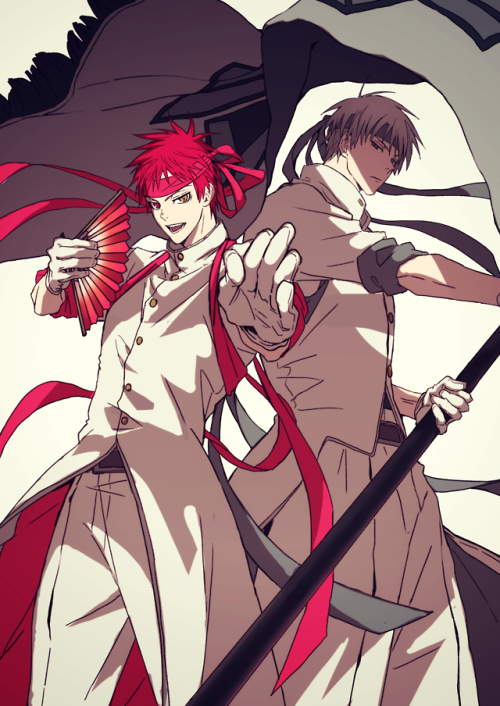 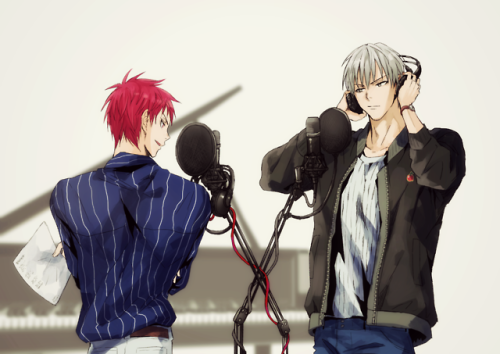 Mayuzumi Chihiro is quite rightly sick of the noise bothering him all throughout his stay at the manor. The terrible howling storm, the clack-clack of heavy boots, but above all, the strange violin music that always starts just as he is about to turn in.

It is, he decides, time for an investigation.

#mayuzumi chihiro, #akashi seijuurou, #mayuaka, #I GUESS, #they're not cousins here they're just friends but they're also like 10 so. no romance., #just shenanigans waiting to happen, #kuroko no basuke, #knb fic, #eliska writes
4 notes · See All
akichan-thText

My brain when I first saw Todoroki: “Is this Akashi and Mayuzumi’s love child” 😂

#kurobasu, #mayuaka, #au time!, #i remember coming up with this YEARS ago, #i thought i posted this lmao, #still like it tbh
17 notes · See All
wingroadPhoto 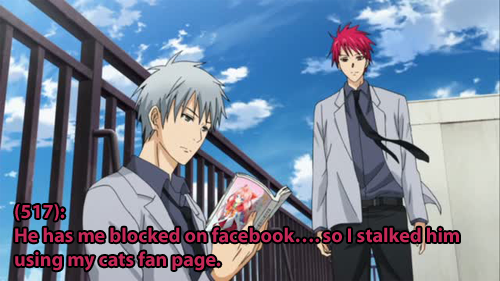