This was posted last year, but this is fabulous! 😂

How Loki behaves when he is tied up

Heroes are supposed to brave. This ordinary citizen up against Loki, a powerful god, into what he believed was right. Everyone else just sat down and he stood up. He shows similar courage that Captain America showed 70 years back.

Peter is such a cutie💖

I made a thing…

“Says the barely twenty-one year old. You don’t know anything about the world.” I’m getting upset with him. We always end up like this, it’s annoying!

“You are literally four years older. That’s not a lot, Nate.” He acts like just because he has four years on me, he has infinitely more life experience.

“And you’re infuriated and belittling. Guys and girls alike come onto me every day but I don’t care because I love you.”

“They come onto me too.”

“And you don’t care either. I hop—I know… I just… You know what I miss?” I try to change the subject.

“Sex?” I roll my eyes. We also always end up back there.

“I miss the beginning of our relationship.”

“Ew, that shit was cringy as fuck why would you miss it?” I wince.

“Because it was nice. I still remember when we met.”

“Why worry about the past when we have our entire future ahead of us?” I stop again, and fiddle his class ring on my finger, letting go of the hope I was holding onto.

“I have to go, I just dropped off a coworker at his apartment and I’m just awkwardly loitering in the lo—”

“You were at a coworker’s apartment?” I sigh.

“I was at a coworker’s apartment building. I didn’t go in. I’m in the lot.”

“Because he needed a ride. I wasn’t letting him walk fourteen blocks at night in New York.”

“Because it’s two in the morning. In New York. And it was fourteen blocks. I’m not letting him risk getting hurt or killed or kidnapped, he’s our best server.”

“Don’t use that voice with me.” I flinch.

“No you’re fucking not.”

“You are still younger than me, by a lot.”

“Four years. We’ve been together six. I’m not a freshman in high school anymore.”

“You are still a child—”

“Then why the fuck are you dating me?”

“Because you need me.” I roll my eyes. “Why else do you keep coming back?”

“Last I checked you were the one who ended up on my doorstep. I gave you another chance. Don’t blow it.”

“You’re so easy to iritate.” He laughs.

I finger the ring as I rev the engine. What’s weird is that this is the same building I lived in the last time me and him broke up.

I pull out of the lot slowly, and also slowly drive the four blocks to my apartment.

He gave his ring to me when I was a sophomore. He had just graduated, and we had just started dating. We met when I was a freshman in shop class, and we became really good friends. It wasn’t long until I started to crush hard, and everyone told me it was stupid because he was a senior and I was a freshman but we’ve been together for six years. Well, off and on. A lot. But that doesn’t matter.

I was kinda hoping he’d have proposed by now, since the class ring was a promise, but I don’t think that’s going to happen.

Natanial is an actor, and he works in pretty big stuff. He’s been in multiple movies as extras and a few tv shows as side characters, and this is his first main role. He’s the love interest in a Netflix original, and that doesn’t bother so much as the fact that it’s a gay movie. I could handle it if it was a girl he was having to act with. It would also be easier if he hadn’t cheated on me before…

I drive in circles for a little bit. It helps clear my head. I’ve been thinking about him for a while.

I don’t understand him at all. When we first got together things were perfect. But now… He’s turned into this… Person that I don’t know at all. Its almost like he’s drinking again. I’m constantly afraid that he’s going to ruin his year clean. He was in rehab and did great and he’s gotten his life together a lot since the last time we broke up. He actually came back to me.

I told him that after last time I was gone, but he found me. I don’t know how, I mean he probably just followed me home from work, but I never actually found out how he found me. At that point I took up a day job working at a gas station; I needed more money coming in to pay rent and have food and have gas.

I was fully prepared to never see him again, Tony was helping me out anywhere he could. But he showed up and he was okay and looked good and he begged me to give him another shot.

I never could say no to him.

I stop by H-Mart and go to Tous Les Jours to get some sweets, I like the chocolate cone thing. I eat in the parking lot, sitting on my bike. Then I go to the old gas station I worked at. I’m in the mood to talk.

“Harley? Is that you?” I smile at Alyssa, my old manager. She really helped me out.

“Harley!” She jumps over the counter and hugs me. “How are you?”

“He changed? That’s what they all say, Harley. That doesn’t mean it happened.”

“He did.” I insist. She shakes her head, her blonde hair bouncing.

“What brings you here?”

“Damn right.” She hops up onto the counter. “Talk to me, baby.” Fun fact, she’s from Georgia and is a struggling actress. “Tell me all your worries and your strife.” She sings softly. She’s always singing. I’ve missed that about her.

“We got a new server at work.”

“Yup. I just dropped him off at his place. He just moved into town from Ossining.”

“Sure is, but he has no concept of his own safety, the guy doesn’t have a car or even a bike.”

“He ain’t got shit, Lyss. He don’t talk about no one except his aunt and that’s rare. He was walking.”

“No.” She gasps. “Does he not know how dangerous this city is?”

“Guess not. Anyway I drove him home today, and…” I stop.

“Got into a quarrel with Nate?” She guesses.

“Did he stray? Why do you stay with him when he’s never been loya—”

“He belittles and berates you?”

“If he treats you like a child why does he date you? You know that’s not healthy.”

“He’s been getting better.”

“He’s toxic and you know it. When was the last. Time you talked to any of your friends?” I open my mouth. “Six years?”

“They didn’t support our relationship.” I defend.

“When was be last time you went home? Saw your mom? What about your sister?” I’m silent. “Your birthday is next month. I say you should treat yourself and go home. Reconnect with your family.”

“I don’t have money to just up and leave, Lyssa.”

“Save your money. Is he sending money for rent back at you?” I nod. “Just save as much as you can, honey.”

We talk for a while before I decide to leave. I take the long way back to I’m my apartment. It isn’t until I pass by Peter’s building and see him sitting by suitcases, seemingly crying, that I stop.

Bucky: hey can you come here?

Sam: nO youRE gOnNA pUncH ME! agAIN!

Tony *after consuming enough caffeine to make his heart explode*: I’VE GOT THE ULTIME SUPREME POWER RUNNING THROUGH MY VEINS *shrieks*

Steve: You’re litterally older thAN ME!

During a meeting with all the avengers:

Tony: ~you are my fiiireee~

Bruce: ~believe when i saaaayy~

Natasha: ~i want it that waaayy~

Everyone: *screaming* ~AIN’T NOTHING BUT A HEARTACHE~

Rhodey *walking back in the meeting room after leaving to the bathroom for 3 minutes*: i left you for tHREE MINUTES YOU FUCKING MORONS WHAT DID YOU DO?!

everyone *pointing at the closest person while in the middle of a fight*:THEY STARTED IT

Stephen: *shows him the middle finger*

*Iron fam is playing volleyball on the roof playground*

Harley: *throws the ball aggressively on the groung*

Ball: *bounces back up and hits him where it shouldn’t have*

Thor: *is staring at loki with em’ heart eyes*

Natasha *running out of the room*

Gamora *accidentally slaps him in the face*

*MJ got a new haircut*

Peter:hi MJ- what’s with the hair

MJ, ready to fight: you know i don’t care if you like it or nOT CUZ I DIDN’T ASK YOU SO YOU CAN GO FU-

Peter: it looks really good on you, you look stunning *heart eyes*

Peter *before taking down a bunch of bad guys*: vibe check

Tony, to peter: I’VE BEEN WORKING ON NEW SUIT DESIGNS FOR HOURS AND ALL YOU DID WAS A DRUNK CAT(?) AND A TABLE

He is such a cutie😍

The lone cyberman: we are inevitable

Surely I wasn’t the only one thinking this ?

Please do not repost. 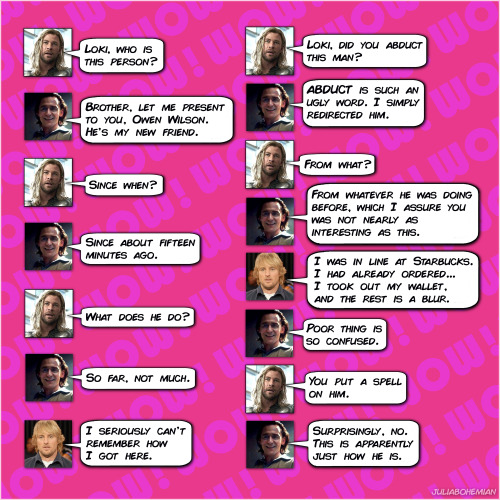 Whether you like leto or not this is still funny but hey he still has an Oscar for Dallas Buyer Club.