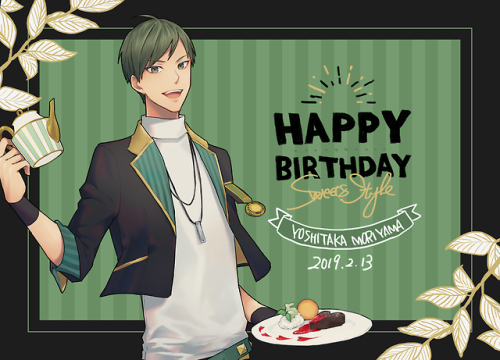 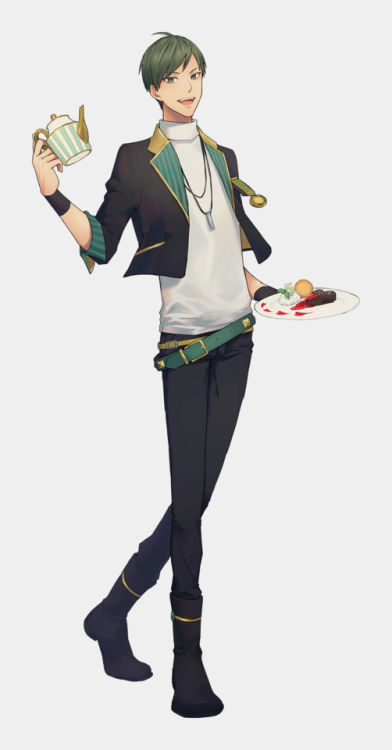 YOSHITAKA MORIYAMA×PANTONE PAST COLORS OF THE YEAR 2015 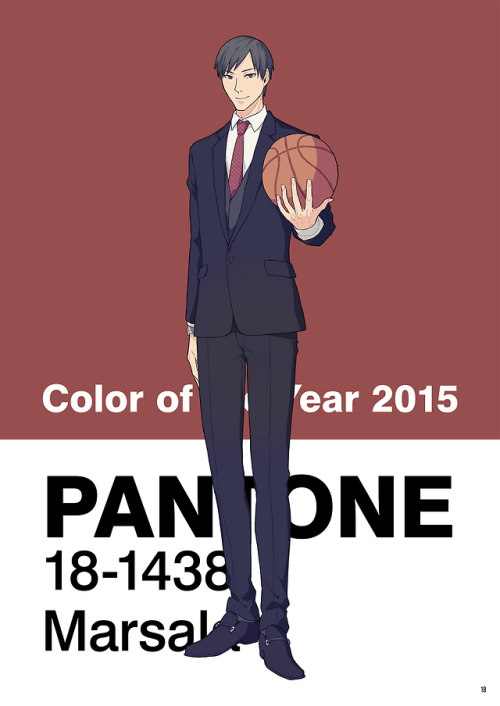 YOSHITAKA MORIYAMA×PANTONE PAST COLORS OF THE YEAR 2014 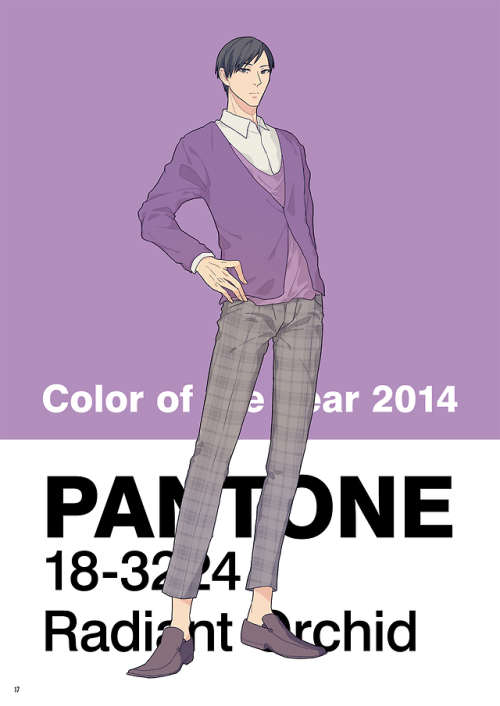 Kise : *GASP* senpai… Why you never tell me? We can dating~!

Moriyama : I’ve serching for best girl for me. But i don’t know a girl actually really near with me. *blinks. Don’t know what to say*

Kobori : *smile innocently* is this one of april fool’s joke?

Moriyama : *throw a butter to Kasamatsu*

Kasamatsu : *the butter landed on his face* the hell…! Why you throw a butter to me-?!

Moriyama : Izuki was said “Butterfly is butter-fly”. So, i throw a butter at you. To tell you how beautiful you are. Like a butterfly.

Finally, after trying many times. Yay! You did it Senpai !

DO NOT REPOST MY GIFS 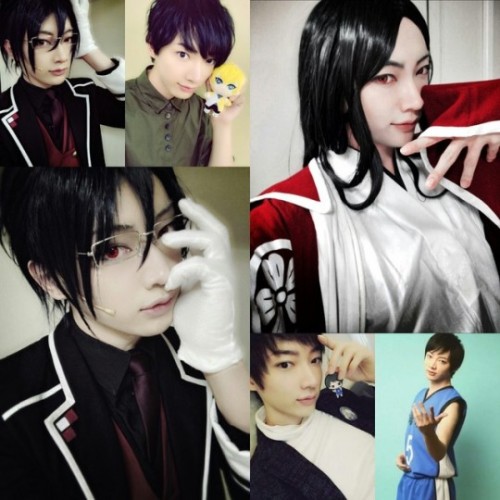 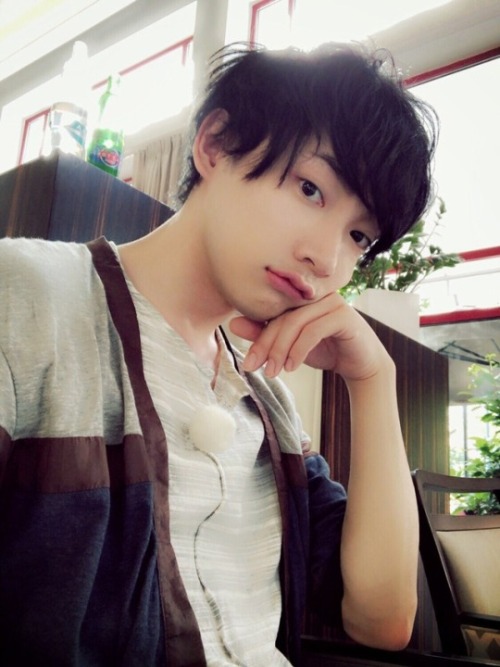 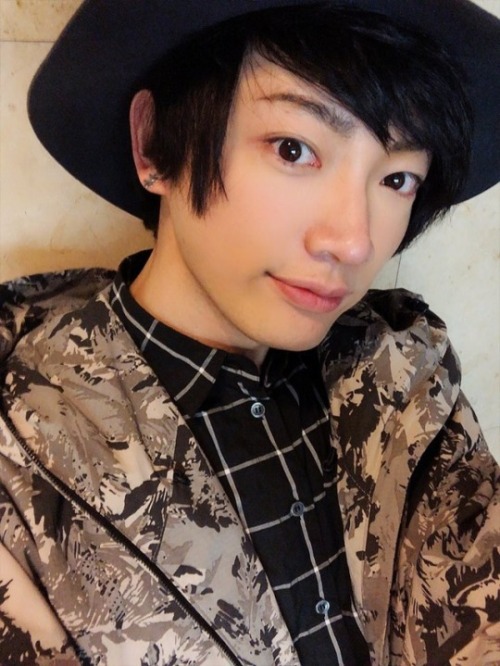 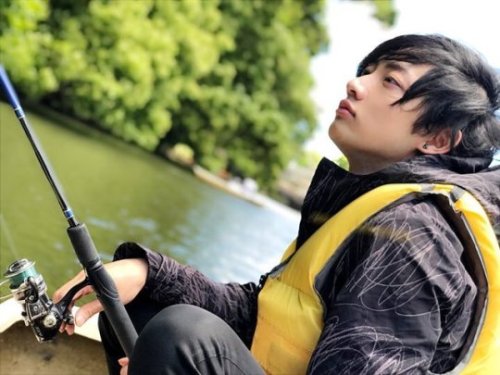 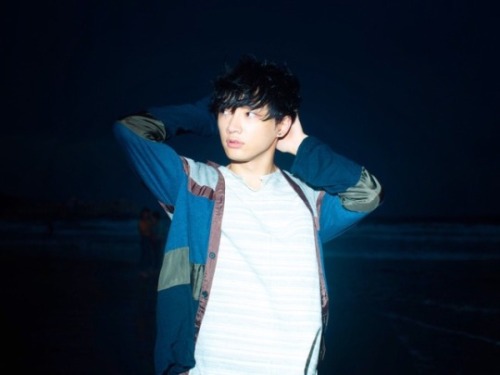 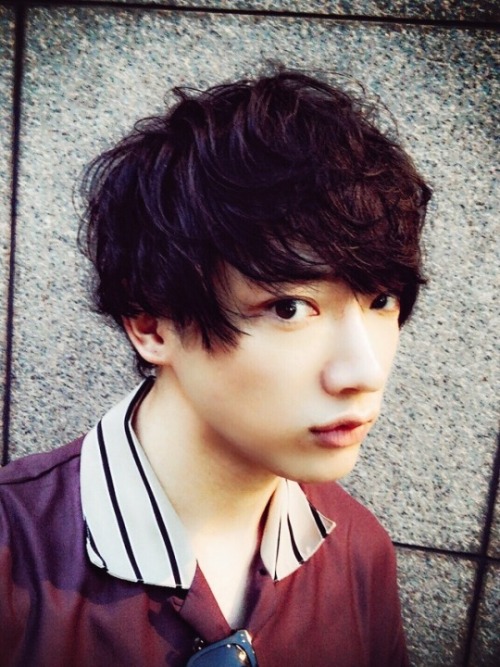 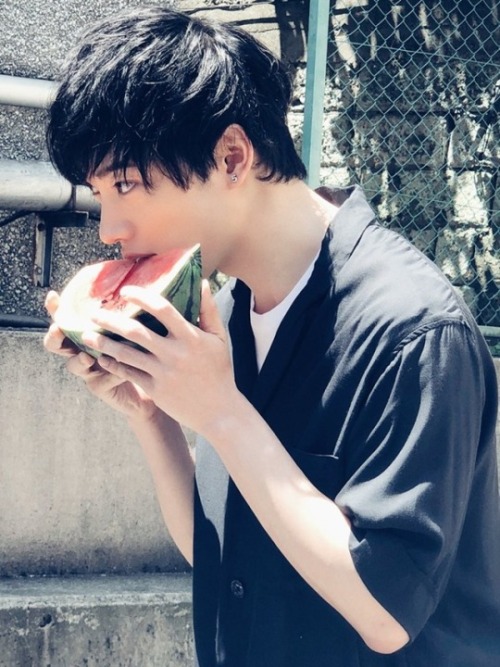 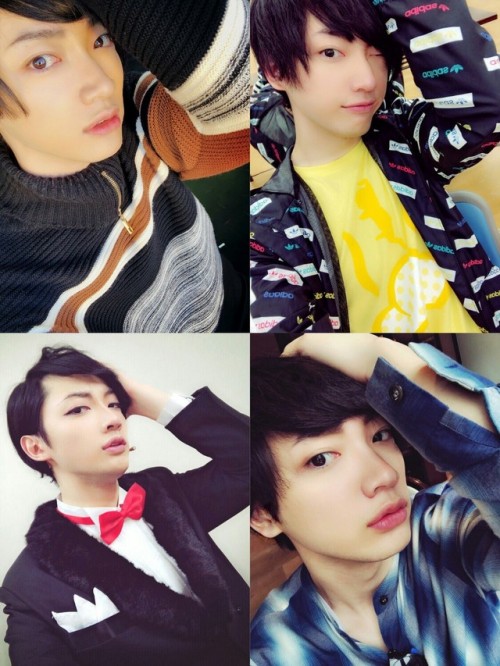 Idk why i do this. But since Moriyama always funny in my eyes,

It makes me want to play a prank to him.

moriyama gets kobori to take pictures for him often, which kobori is fine with since he’s a bit camera shy ( kasamatsu is too!) 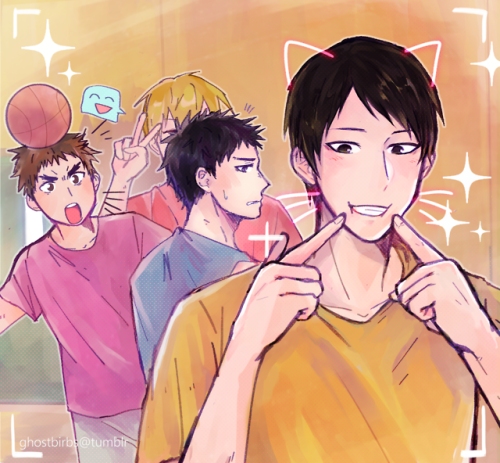 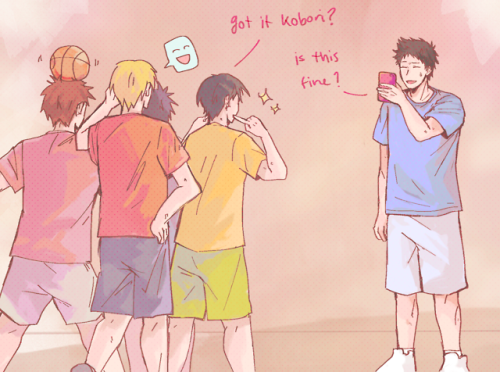 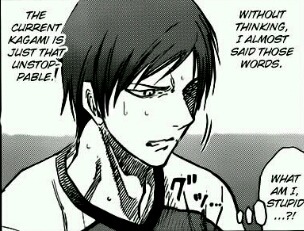 I feel Moriyama is the type to take a relationship seriously. Despite his flirty nature, I feel that’s how he tests a girl to see if she laughs or not. If the girl laughs, he found his soul mate (So he claims) and will do everything he can to keep her with him. But he won’t hit on a girl if she’s in a relationship or is clearly not interested. He does respect them after all.

OMG… YES. I saw this and instantly began screaming because omg.. A scenario just kind of jumped at me the moment I saw it.. (but I was busy writing other scenarios.)

He stops, looking up from his studies to meet your hesitant gaze.. Moriyama is only used to you calling him by his first name either during sex, or when you’re angry.. And seeing as you whispered his name, and you’re standing in front of him, anxious, has him concerned.

“What’s wrong ____-chan?” he gets up, rushing to you in panic as you’ve yet to answer his question. “Are you sick? Hurt? Do you need something?”

You try not to laugh, because seeing Moriyama so anxious and nervous is very adorable. But the matter at hand is serious, and you’re not really sure how to bring it up..

You bite your lip, showing him the stick in your hand. He looks at it in confusion, eyebrows furrowed.

His hand wraps around yours, and he sees two lines, along with a happy face… Okay.. so it says positive…. But…

You release a breath, holding onto his hand with your own. If it wasn’t for his hand on yours, you would’ve dropped the test, and you try to gather your composure..

There’s a complete silence as you search his eyes, watching for any sort of negative reaction. You hadn’t talked about having children this point in your life, since you were both excelling in your careers, and lots of doubts had been swarming in your mind recently..

You look down, trying to bite back the tears as you wait for his response.. But almost immediately, you yelp when he picks you up, begins to swing you around as he laughs and has a couple tears in his own eyes..

You hold onto him, laughing and bury your face in his neck as the tears stream down your cheeks. To see him this excited and happy elicits the same reactions from you, and you can’t help but feel a weight being lifted off your chest.

He stops, holding you in his arms and rubs your back, pressing soft kisses to your forehead.

“You have no idea… how happy I am to be the father of your baby…” he smiles, cupping your cheek and presses a loving kiss to your lips,

You let out a choked sob, a smile curling on your lips as you return it, holding onto him tightly.

He chuckles, keeping you in his arms as he kisses your cheek.

“Just next time, if you’re going to tell me big news, don’t use my full name.. Otherwise I’ll think I’m in trouble..”

The two of you burst into laughter as you rejoice in the blissful moment together..

#knb imagines, #knb scenarios, #moriyama yoshitaka, #fluff, #prompt, #pregnancy, #onliafaze
29 notes · See All
codename-bewareofthefangirlAnswer
Kasamatsu, Moriyama, and Kobori are friendship goals!! Please make a story about these three's journey of friendship since elementary days (I headcanon this!) until the end of high school. I think Moriyama doesn't go to the same college as the other two so maybe include some sad/angst moments for that. Thanks^^

This ask was as beautiful as hard, it really took me a lot of time. Did I write it during the night? Yes. Is it OOC or not good enough? Probably. Am I going to post it, either way, hoping to make you at least smile? Obviously.

Sorry if it’s not the best thingI’ve ever written, I’m battling with myself right now! I hope you’ll enjoy it!

Yukio, who was playing football with some boys from his class, stopped running and searched for the source of the commotion.

Another small boy, probably of his age but from another classroom, was surrounded by a group of older boys who laughed at him. He was hugging a ball to his chest, looking at the ground as he tried to hold back his tears.

“Why they don’t want him?” Yukio mumbled, furrowing.

“They say he always plays with the girls, so they don’t want him.” The sudden voice made Yukio jump in the air.

“What?” he turned, wide-eyed, and found one of his classmates. His name was…Kouji. Right, Kouji.

They had started their first year of elementary school two weeks ago, yet it was the first time Yukio’d heard him talking. And he was really tall for being the same age as him.

“They say he should play with girls,” Kouji repeated quietly, tilting his head.

Yukio frowned more and moved his gaze again to the poor boy. One of the other kids pushed him and he fell to the ground.

Yukio clenched his fists and his face became red with indignation.

He rushed towards them, screaming, “Hey you! What are you doing? Leave him alone!”

The boys turned to look at him, sneering, and their victim just widened his eyes, as tears ran down his cheeks.

Yukio growled, “Didn’t your mom tell you that you shouldn’t pick on others?” He glared menacingly.

They snickered, ready to pick on him too, when behind him appeared Kouji. He simply stared at them, expressionless. However, the kids lost the desire to argue with someone bigger than them.

“Tsk, do what you want,” they hissed, walking away.

“Don’t show your face around us!”

Yukio was trembling with anger, ready to chase them and throw a good punch, but was distracted by Kouji.

“Are you okay?” he asked softly to the boy still sitting on the ground.

He nodded weakly as he tried to wipe away the tears, but it wasn’t very convincing.

Yukio sighed at him and held out his hand, “You shouldn’t let them bully you!” he scolded.

The boy grimaced, accepting the help, and stumbled up, “They were more and older…” he argued feebly.

Yukio shook his head, “Still, call for help next time.”

“M-Moriyama Yoshitaka…” he stuttered, fidgeting with his hands.

Yukio grinned widely at him, “Nice to meet you, Yoshi! I’m Yukio!”

“And I’m Kouji,” the other boy added.

“Come on, let’s go playing!” Yukio said excitedly, pointing at the ball he was holding.

“You want to play with me?” he asked, incredulous.

“Fine,” the other agreed.

Yoshitaka saddened, “But they said-”

Yukio cut him off, “ ’Don’t care!” he grabbed Yoshi’s wrist and started dragging him towards the garden, Kouji trotted behind them, “Come on! You’re going to play with me from now on!”

Yukio laughed and turned to look at him, “Yes, we all are now!”

“Yu-Kio-Chan!” Moriyama sang draping himself over his best friend’ shoulders, who roughly shook him off.

“I already told you to stop calling me that,” he growled, but the annoyance in his voice was nearly none and Moriyama knew.

They were walking in their middle-school’ corridor, eating some sandwiches and drinking juice. Kobori was with them, quietly watching over his two friends; he had grown so much that the other students couldn’t resist from glancing at him as they passed. Moriyama and Kasamatsu were now the same height, much to the second’s chagrin.

“Yukio!” he whined again, pulling his sleeve to have his attention, “What club are you joining?”

Moriyama: Did you sat on a pile of sugar? ‘Cause you got a sweet ass.

Kise: Is your name honey? Because you’re so sweet.