@ everyone who read the Ouran manga: do y’all remember that extra side chapter where they found the ghost of some kid and the kid’s doctor looked EXACTLY like Kyoya???? and the doctor ended being the ghost of one of Kyoya’s ancestors?????? or was I dreaming

it does not feel real

THE KING AND HIS COURT

THE QUEEN AND HER COURT

Let’s return those bitter days, can you open it?
Your dreams are locked inside this Pandora’s Box

🌹 If you want this as a print, check the notes for the link to my shop! 🌹 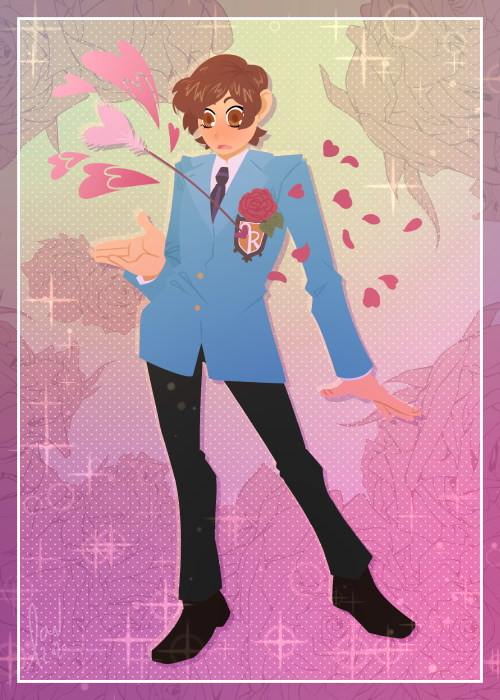 Haruhi: Hey guys look at this idiot on TV who’s trying to climb a building

The Grade School Host is the Naughty Type!

it was love at first “kiss kiss fall in love”

ok I’m sorry but I have to say this: if the only reason you don’t like Kyoya is because of that one beach episode scene you probably didn’t rlly understand what was going on in that episode

tl;dr kyoya was stupid in that scene but it rlly didn’t do ANYTHING

#bts zine, #zine, #fanzine, #bts, #ouran koukou host club, #ouran high school host club, #ouran host club fanzine, #ouran host club zine
2 notes · See All
readerinsertfanfictionAnswer
Hi!! How about a OHSHC Hikaru x reader where she's friends with the club and a loud extrovert but gets quiet and turns red when the twins do their act, Hikaru thinks she just likes the act but Haruhi says that reader has a bad crush on him. She not only has a crush on him she also daydreams about him saying stuff from their act to her. They become a couple and she's a bit clingy but anytime he shows any pda she gets super blushy and giggly so he goes out of his way to tease her? Thx!! 😘

These requests are getting more and more specific! Not that I mind but you will have to forgive whatever liberties I will take while writing the request and if it doesn’t match your expectations. (❁°͈▵°͈)

“Kyoya, that is a rather disturbing habit to have.”

There really was only one bold enough to challenge the accountant of the host club. With a wide smirk you leaned over the young man’s shoulder, picking up one of the many ‘limited edition’ pictures that he had snapped under shady circumstances.

“What is this, a daddy line?” you snorted, shaking your head at the many pictures of Tamaki wallowing over Haruhi along with the series of a Takashi caring over Honey. “You guys are so shameless,” you continued to exclaim with a giggle.

Before the bespectacled member of the host club could react, or before you even could continue to take a rise out of the special event slim fingers captured your chin, turning your face around.

Feeling your breath stock you stared right into Hikaru’s eyes, his smile mischievous as he zoned in on you.

“Why do you always fall silent whenever I come near you,” the male spoke, his gaze shifting into an unreadable emotion of longing, his jaw clenching ever so lightly as if he couldn’t accept the situation. “It pains me to see you smiling at everyone while you avoid my eyes,” he continued, face inching closer as yours grew redder.

Grasping for your last bit of sanity you tried to stammer something out, or even breath before you were promptly released, another mischievous smile following.

“Now, that is a lovely shade on your cheeks.” A wink followed and the twin turned away from you, high fiving his brother that stood watch and a distressed Haruhi who only shook her head at the disastrous pair.

“Please do only blush for me.”