From the new Marvel Super War MOBA app game that’s released in some countries (apparently in my country but my phone is too shit to play it). It’s seriously a League of Legends clone. They even set it in Wakanda to have bag excuse for bushes and rocks, and having the exact same layout as LoL.

All of the heroes so far come with at least one skin; so the Black Order all have the ‘of Glory’ alt skins. Personally, I think Ebony Maw’s Glory skin is definitely the best.

Voice cast sounds like it’s the one’s from the animated TV shows who usually do the voice work for games. Also they call Black Dwarf Cull Obsidian instead, even tho this is clearly based on the comic versions.

Decimating half the universe doesn’t pay enough these days so when in doubt, start a cover band

“Just because I do not vear my watch often,” Kurt swipes a two fingered hand for the hologram watch Todd has once again taken for himself. He looked an oddly handsome version of himself (trying to impress Pietro’s sister no doubt).

“C’mon, be a hero! You just said you don’t even need the thing.” He hops away and Kurt teleports behind him, frowning as he wiggles from his grasp. “Give a frog a chance, man.”

“Toad, ve can’t have this tech floating around out there. If it gets in the wrong hands…” The thought of any person being able to shape shift like his mother made fear blossom in his gut. It would be catastrophic. “They might come looking for us, see vhat else we had…” The memories of the mansion exploding were still fresh in his mind.

“Aw, I’ll be careful! Promise.” Kurt teleports above him and tries to drop down through the branches of a tree. He hops narrowly out of the way when he leaps for him.

“Toad, it’s not up for….” Night had fallen and the two are rolling in the lawn of the dilapidated mansion. Then a light flashes across the sky that makes both boys go still. It becomes as bright as daylight and then a purple disc appears in the air. First, Todd scrambles to his feet, followed by the teleporter as they watched figures emerge through.

Very off looking, blue skinned mutants saunter through. At least they looked like mutants. When three appear with various sized weapons, Toad looked between them all. “Friends of yours?” He shrugged when Kurt raised an eyebrow, waiting for an explanation. “I dunno, the blue…”

“Are they both teleporters?” A woman asked, draped in strange and exotic looking fabrics. She spoke like they weren’t there. “I thought I only sensed one.”

“Well, Proxima. Surely we will have to destroy them both.” Toad starts backing away as Kurt tries to plan where he teleports. This wasn’t looking good. They are capable of interdimensional travel and Forge and Hank knew exactly how impossible that was.

“If I say yes vill that make you feel better?” The Brotherhood member shakes his head vigorously. When a strange looking gun begins to glow, he screams out and throws his hands in front of him.

“I am a mutant, Toad.” He says in exasperation when one of them raises a bladed spear. “Not an alien. Not like them… Ve mean you no harm.” He does his best to look intimidating. “Yet.”

“Quite a snarky response for one whose only power is running away. When you are gone, only we will be able to access the stone. Then this universe will be forged by our God.” Toad trembles when he realizes this an Apocalypse level event happening in front of them alone.

“Pipe down.” Kurt orders sharply. He’s learned to keep his cool if nothing else, Logan taught him that. “Ve need to get vord to the others-”

“Oh,” The female of the group says. “There will be no leaving here.” Her fist begins to glow a vibrant blue. Kurt grabs Toad and prepares to dodge whatever hellish attack she was going to unleash.

“Wanna bet?” A red energy counters the blue blast that flies from her hand.

“NO,” Kurt’s eyes go doe wide when Wanda rockets overhead, her lips pulled back in a snarl. The shortest of the figures raised a weapon to her, but red magic wrapped around him and kept him from moving.

“Actually, it’s Scarlet Witch.” Proxima swings but Toad points as they all begin to vanish. Wanda raises a hand, sweat dripping down her neck as she focuses on her hex. ‘I can buy us some time… To prepare for this.’

Kurt can’t shake the shiver as her red magic works. The invaders are gone. For now. And he knew they’d be back, they always came back. Wanda rifles a hand through slowly growing hair, dyed red at the tips and still shorter than the X- goth’s. “Jerks.”

“Snookums! You sure showed them, I’m-” She palms the strange intruder in the face, not recognizing Toad wearing Kurt’s hologram watch. Taking the opportunity, the blue mutant scrambles fast and finally snatched his watch back. Todd’s appearance returns back to normal.

“There ve go.” Wanda rolls her eyes in disgust when she realizes what’s been going on.

“Aw man, no fair.” He watches Kurt quickly fasten it back on while Wanda watches.

“You still wear that?” The whole world knew about the Bayville mutants, there was no hiding for him. He flashes a smile and a shrug when she seems disappointed.

“It is safer vith me than it is vith him.” That she agreed with. “Have you thought about the professor’s offer?” Toad raises an eyebrow at that. He can’t imagine her ever going straight.

“Have I shown up?” She may not be the rampaging mess she had been a few years ago, but she still hadn’t warmed up to the prospect of being an X-Man. She was her father’s daughter.

“Okay. Fair enough. Take care, then.” A frown replaces his face when he looks as the amphibian mutant catches a fly with his tongue. “You stay avay from my vatch, or next time I’m sending Logan.” With that he disappeared in a cloud of smoke.

Cap and company to the rescue!

Happy New Year!! Special shout out to the Black Order Fandom for helping me stay motivated to keep drawing this year! 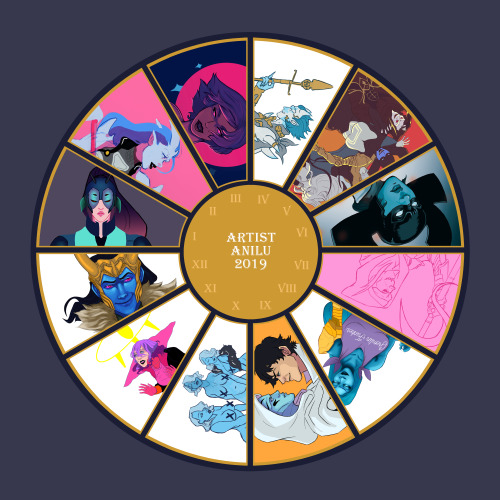 #new years resolution, #proxima midnight, #black order, #ocs, #maximus, #supergiant, #corvus glaive, #my art, #my artwork, #vesper, #violet, #andromeda, #black swan, #cull obsidian, #loki, #robin, #its... sooo many midnights, #like, #an obesssive amount, #im not sorry, #also dragon.... you are the most wonderful patient human being, #and ima draw you so many marvels i swear, #2020
9 notes · See All
rhyan29Text

“Against all odds! Cap standing to face off with Thanos’ army!” 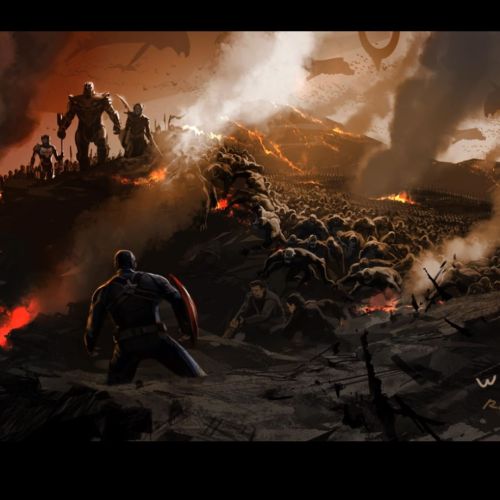 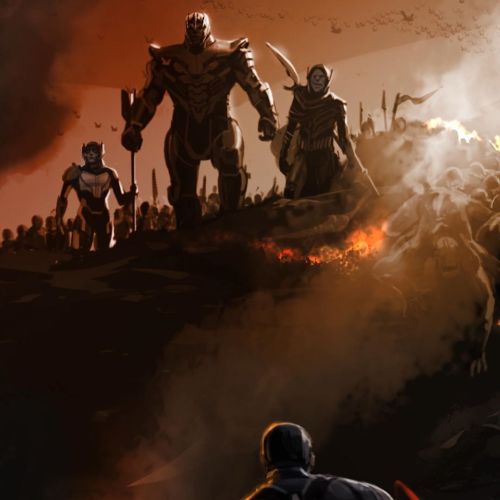 Proxima through comlink: Be careful

hey look I’m actually doing it, this is from the Whumptober-based WIP I’m still trying to finish

Proxima takes Loki by the throat and slams the knife into his stomach. For an instant it only feels like a punch, driving the breath from his lungs, and then she jerks the knife upward and his core erupts in molten agony. She yanks the knife back out and shoves him away, sending him staggering. He manages to keep his feet but only just, and he can feel the blood running hot and wet down his front.

He bares his teeth at her. “And here I thought you and your master pretended to have some twisted sense of honor.”

She sneers. “Honor is for the weak. The strong have no need of it.”

How Corvus thinks he looks when worshipping Proxima:

How he actually looks:

niwainktober2019 DAY 27: SEXY SCI-FI
I used fountain-pen ink for Venom and old indian-ink for Proxima and now she is forever glossy. 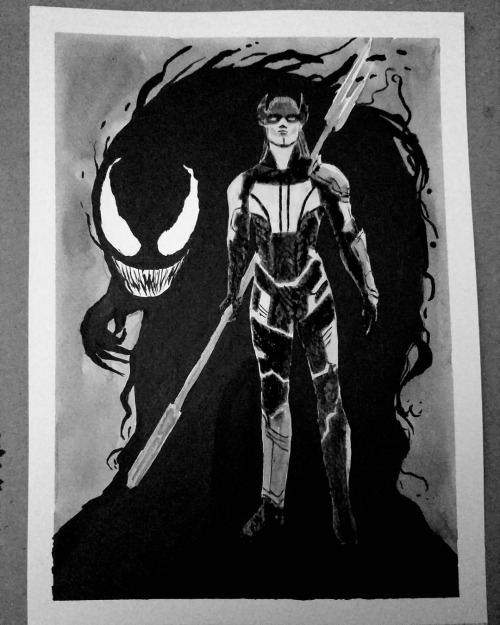 #proxima midnight, #venom, #venom symbiote, #mcu, #Niwainktober2019, #inktober2019, #everything labeled as sci-fi is sexy, #traditional art, #fan art, #I did this in october but I forgot to post earlier
28 notes · See All
officialtrashbinText

The thing is, Corvus and Hela do have a history, and it isn’t pretty.

Backstory and some events leading up to GotG 2019 #1.
Birthday gift for @senpoiypul <3

He was not the first person to reject Death, nor will he be the last. Hela thought that strange, and intriguing, and sad—Death was pathetic, always pining for the ones that desired her the least, but unlike all things in the universe, she gave meaning, and it came as no immediate surprise that the quality of her love came with the quantity of gifts bestowed by those most affectionate of her.

Corvus did not love Death, but he was no exception.

I got a couple of these and got super confused what it was for but apparently it’s for the LOVER art meme I reblogged for my artist friends cause my ass can’t draw.

#do i even dare have the audacity to post this in the proxima midnight tag, #proxima midnight, #anon, #god really didn’t stop my hand and allowed this to enter the world
8 notes · See All
Next Page