Reasons why Grell is a fat mood

Sebastian: who the FUCK is selling their soul for $2 on etsy??!

Tried a watercolour speedpaint today, I’m actually kinda pleased with how it turned out!

@detavott​ requested a Sebastian Michaelis loves mandarin oranges moodboard! Here it is dear! Hope you enjoy this image… uh… packed with essential nutrients! Or something

Sebastian and Beast in the Garden of Evil.  They spent a romantic night together and Sebastian was so content by morning that Mally “Beast” had a difficult time waking him up.

Am I the only one that knows why O!Ciel took his brothers real name?

O!Ciel was the weaker twin, he was always seen as the weak one while his brother got all the praise. From the manga it looked like O!Ciel didn’t even learn anything like his brother, he didn’t know a single thing about his family or being an Earl. If he came back as himself everyone would be disappointed, the queen will most likely not revive the Watchdog position.

O!Ciel took his brothers name because that’s the only way he can keep the Watchdog position alive and keep the Phantomhive name strong. He didn’t take it cause he wanted to be his brother, he took it because he didn’t want to be seen as a weakling, not just his brothers spare. He wanted to be seen as a strong child who was like his father. He also said in the manga if he came back everyone would be disappointed that the spare came back, his family would be upset.

That’s what I got from the manga and what I think.

Does anyone remember that chapter where Sebastian was covered in dirt or blood and looked in the mirror, took his hand and swiped across the mirror and he was clean? I can’t find it.

It was also a meme that’s said I’m so gorgeous. 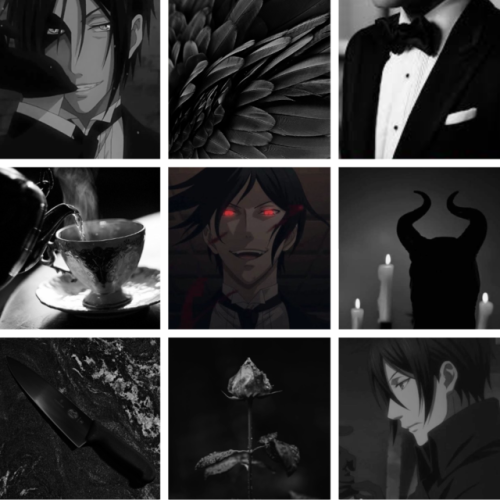 “Do you wish to form a contract with me?”

Repost as tags wouldn’t work on my previous post

I cannot get enough of this sassy demon bastard, and I’ve been wanting to play around with lights and colours

I can see me painting many more in the future, but for now here’s this one 💜

Can you imagine him trying to hold back?

He’s clenching his fists and grinding his teeth a bit, watching you strut around in front of Ciel, asking him which outfit should be worn for the day. The much older Ciel gives a wry smile as he stares at his butler, and toys with him more as he asks you to try on another.

Sebastian has to exscuse himself, bowing and promptly leaving the room while images of you flood his mind. Ciel is more of a devil than he is sometimes, and it’s truly showing when his young master is toying with him like this.

He just needed a deep breath, and a reminder that you can’t know about him and his true form. As declious as you would look underneath him (or above him, honestly anywhere with you is a holy picture he wants saved in his mind for centuries) he knows he can’t act on it.

A moment alone would settle him down. Just a few minutes! But you, and your lovely little self, had to be concerned and go check on him. You gently tap his shoulder, causing him to swiftly turn around in a bit of fear, knocking a vase off the table beside him.

He hates that he didn’t catch it, that he’s so overwhelmed with your scent and your presence he’s losing his swiftness and focus. The vase shatters, and you begin to kneel to help pick up the pieces, all while apologizing profusely.

He assures you everything is fine, looking down at you on your knees while pleading for him not to be angered. It was a rather lewd position, and it only fuels his carnal desires to have you all to himself in such adorable clothing. “Oh Y/N, don’t fret over it. It happens” he reassures, helping you off the ground.

You smile softly, eyes avoiding contact out of embarrassment and shyness. He won’t have any of that. He tilts your head up to force you to look into his burning gaze, your bright eyes making him even more hungry for you. “However…” he continues, hands wandering further down your torso and hips, clutching your dress a bit too hard.

“It would be a shame if my young master found out…perhaps we can exchange a few favors to keep it a secret”.