“I prescribe you 100mg of Quit Your Whining.”

“Ha ha ha.” You rolled your eyes. Sometimes Stephens jokes could be amusing, maybe even endearing, but other times all you wanted was for him to keep them to himself. This was one of these days. Your head had been killing you all day. Pounding inside your skull. You’d tried to take your usual medications, to drink more water and rest, but nothing was working. You’d thought when you went to the actual doctor he’d be more sympathetic. “You’re soooo funny.”

“Thank you,” he smiled. “I know I am.” When you sighed, Stephen moved from his stack of books closer to you, more serious now. “I’m a good docror, too.” He said, holding up a slip of paper in front of your face. On it, in his chicken scratch handwriting, it said “migraine remedies”. He knew, from how long it had lasted, how intense the pain was and your sensitivity to light, that it wasn’t just a headache, but a migraine.

I wonder what happened to poor Stephen ´w` 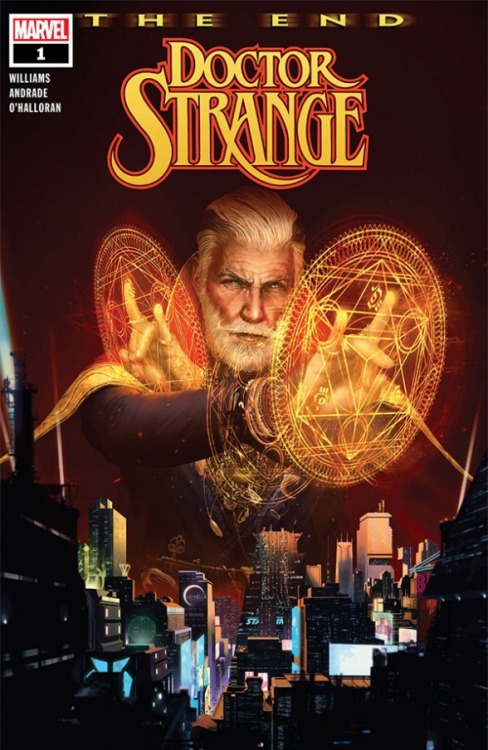 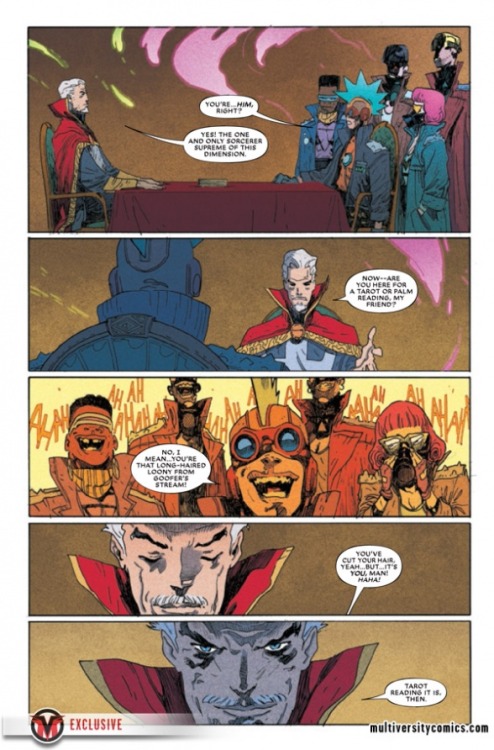 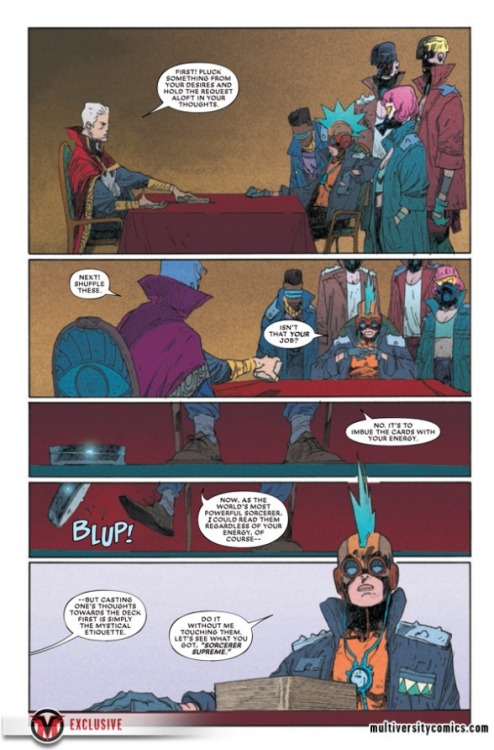 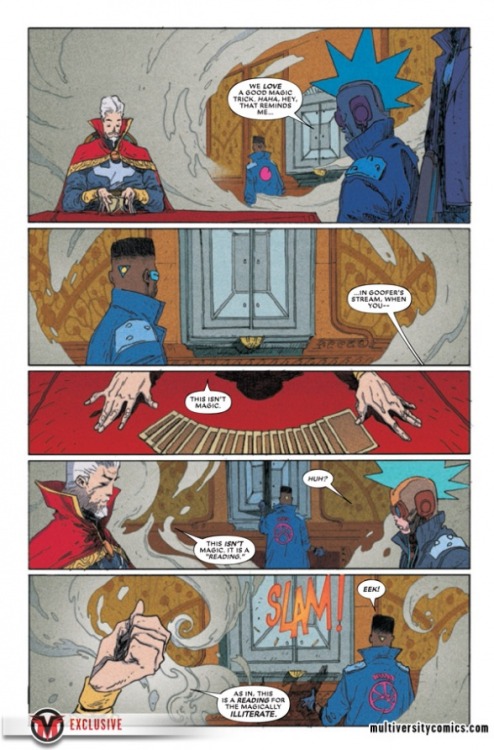 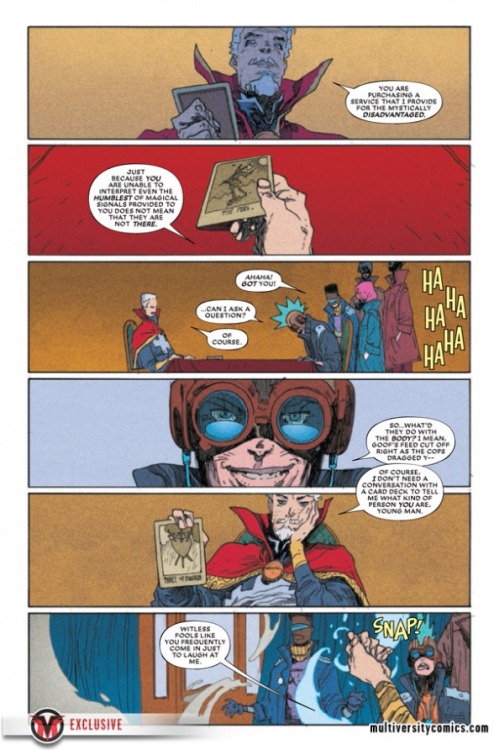 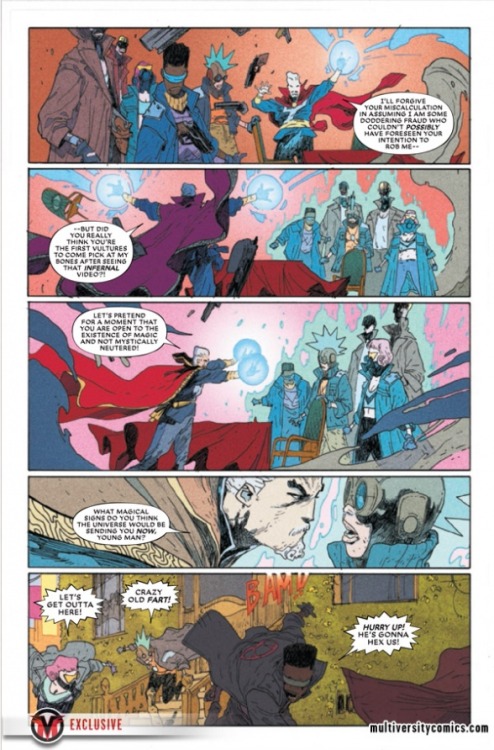 Oh look I made a thing

April seems modest for our good doctor, although there’s always a chance for him to appear as a guest in other comics.

Jim Zub (W) • Carlos Magno (A) • COVER BY STEVE MCNIVEN
VARIANT COVER BY TBA
With the threat from the stars now reaching Earth, Captain America sends out the call for heroes to meet its advance across the globe! But in the far–off Antarctic Savage Land, Ka–Zar and the Agents of Wakanda have located an enemy offensive that could change the course of the conflict! Which Avengers will answer the call to this remote area and will they be able to cope with the strangeness they find there?
32 pages/Rated T …$3.99

MARK WAID (W) • KEV WALKER (A) • Cover by PHIL NOTO
MARVEL ZOMBIES VARIANT COVER BY LUKE ROSS
THE SORCERER SUPREME ROBBED!
• Someone is stealing magical artifacts from Dr. Strange!
• With the help of Dr. Druid, Strange must go undercover to discover a magical black-market arms dealing ring…
• …but is Strange walking into battle with an ally or another enemy at his back?
32 PGS./Rated T+ …$3.99

GERRY DUGGAN (W) • ADAM GORHAM (A) • Cover by VALERIO GIANGIORDANO
Something is killing the Shuma Goraths! That’s usually great news, but Kulan Gath thinks he’s finally figured out how to consume the elder god, and it’s BAD NEWS for our plane of existence. Dr. Strange and Elektra recruit Conan for their plan to kill Kulan Gath. Now that is some GREAT NEWS.
32 PGS./Parental Advisory …$3.99

Although I’d love to see Stephen in a big event, I’m glad he’s not important this time. I’m quite afraid of Empyre for two good reasons: Dan Slott and the fact that Hulkling will be used as an antagonist, which is extremely harmful to his relationship with Wiccan. I really don’t want Stephen involved in this one. Not at all.

On the other hand, Strange Academy will feature many magic characters, which is very promising. Of course, Illyana would teach Inferno lessons hah. Surprising points for Man-Thing. The Ancient One will be a teacher? I figure he will appear in the form of a spirit? The post I made with the houses were not so wrong after all haha. I wonder which role Stephen will play here. Fingers crossed for him to be a regular character!

Since I need more content to judge the main series, I will pass this one as well.

And finally, Savage Avengers! Gerry is always rotating the team, it seems, but surprisingly Stephen will continue as a part of the journey. I’m very glad, despite the fact that Kulan Gath was not defeated. I really wonder what will happen after the whole Iron Mage thing. Too bad Victor is not around anymore.. Well, we can’t have it all, can we?

My sheepish question is met with a heavy sigh as Cloak lifts to show me the indent where Thanos’ hand had landed.

Just in case you missed anything~

And here is your one way ticket to our Calendar!!!

-How I feel about this character?

Misunderstood, no nonsense Wizard boy, who’s secretly a big softie underneath (but doesn’t do a good job hiding that fact.

-All the people I ship romantically with this character

-My non-romantic OTP for this character

Stephen/Wong. They’ll always be Wizard bros to me.

-My unpopular opinion about this character

Not sure if this counts as unpopular, but they really could have toned down his meanness in DS.

-One thing I wish would happen / had happened with this character in canon.

Summary: Set in the post Almost End of the World from Good Omens and the Post Infinity Wars from the MCU, Crowley and Aziraphale are living their lives as normal when suddenly they are summoned halfway across the galaxy to help deal with the pressing problem of one Galactus trying to consume everything in his path. However there is a small problem in the fact that the act of summoning cut them off from the source of their power. Will they gain their powers back in time to save the world yet again?

Text: There were so many things that Aziraphale and Crowley had lived through in their lives.  The Fall from Grace, humans leaving the Garden of Eden, even the almost Apocalypse.  However all of that paled in comparison to the current state of events.  In fact had it not happened to them they would have sworn that it was only a fanciful tale told to them by a human who had imbibed too much.

However there was no deny that one minute the two of them were strolling through Piccadilly Circle and talking about how their day was and in the next they were aboard a spaceborn vessel of some kind.  It took a few seconds to register that the scenery had changed, but when it did the conversation fell suddenly into an awkward silence as both the angel and the demon processed what was around them.

“Crowley?” Aziraphale asked slowly, looking at the burnished steel walls around him and trying to process if this was some avante garde art performance, “Did the lower side just do something to displace us?”

Tony: what’s the point of saying that if you don’t mean it both ways?

AU about Wanda and Stephen fall in love with each other in a trip.

Tony, trying to undress Stephen so they can bang: why the FUCK are you wearing so many layers?! What the actual fuck?

*he unbuttons the second robe to reveal another robe*

Tony: WHY THE FUCK ARE YOU WEARING THREE ROBES

Stephen: theres another one underneath

Tony: WHY ARE YOU WEARING SO MUCH CLOTHING THIS IS NOT SEXY

Stephen: Well you know what’s even less sexy? The fucking cold so deal with it

Song: Drunk on the blood from the album The Royal Society by The Eighties Matchbox B-Line Disaster.

Summary: Thor needs to see a doctor. This is not the doctor he’s looking for. Or maybe it is?

A/N: This can be read as a standalone piece, however it does reference the events of It never mattered. Another sad one. See here for what this is all about.

Thor and Strange are standing looking at the Atlantic Ocean. Thor needs help, and Strange is a doctor. It made sense to come to him.

Strange - Simple. Open the door and say “ get out, you’re bothering me.”

*going into the Stephen Strange tag looking for Stephen Strange content only to immediately catch sight of a T*ny gifset that uses a quote from the actual Bible that is about the fucking son of God, Jesus Christ himself*

Today on “people should  believe Marc about Khonshu just because of his ridiculous cape”, featuring even Doctor  Strange’s cape being chill in comparison. 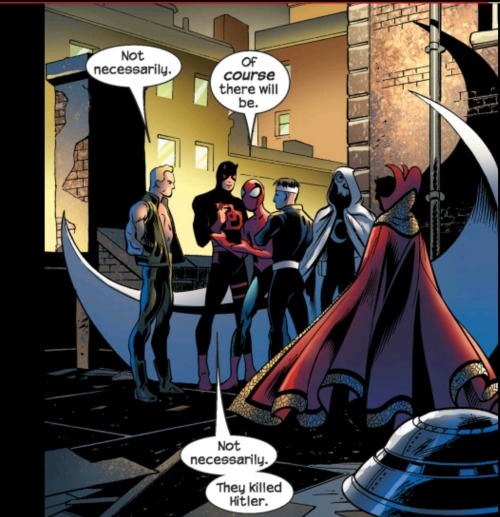 The Sorcerer of Ephemeral Colours

For centuries, the sorcerers of the Sanctum have been the first line of defence for the Kings and Queens of Veston. Stephen, after becoming a Master of Time, wants nothing more than to join his fellow sorcerers in their task and pledge his life to the study of the Mystic Arts. Imagine his surprise when he gets assigned to protect the wilful prince Anthony, instead.

Dark secrets start to unravel and Mastery of Time will not be enough to save the kingdom, let alone Tony. While Tony has to overcome his own difficulties, Stephen must Master all six Aspects in order to do what he was always meant to do – no matter what both he and Tony might lose in the process.

Magic always requires a sacrifice, after all.

hi guys! I haven’t been able to post anything I’ve written on a03 in a while, but only because I’ve been working on this. I’ve got 76k written already so I promise regular updates :) It’ll end up somewhere just above 100k I estimate, so it’s gonna be a long read, with lots of slowburn to look forward to!

Three is the magic number, no problems! The only thing is that I don’t ship clintasha romantically so it’ll be a bromantic thing (?)

send me something / asks

Stephen : I love you to the moon and back.

Stephen : I literally just portal to the moon and back to tell you that I love you.

Stephen : Tony, I love you

Tony : Stephen, you don’t have to do that every single time, stop showing off.

Stephen : that’s a perk of having a Sorcerer as your boyfriend. just embrace it.

Thor : I love you to Asgard and Back.

Bruce : Please, stop copying them, there are not a good example. And stop using storm breaker just for this cheesy line, you ruined my backyard. 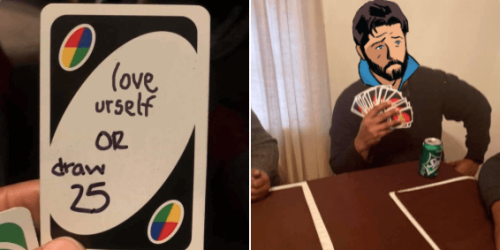