When Thor met Bruce for the first time, he was amazed and fascinated by the knowledge that Bruce had, and peppered him with questions for hours, for days, for weeks, and truly found the scientist irresistible.

But then there was the other member of the team, Hulk, who was Incredible: strong, sarcastic, fierce, and, if he were Asgardian, would have instant admittance to Valhalla.

Thor found himself torn between the two men, the one who blinded him with science and the other who beat him into submission.

Imagine his surprise when he saw Hulk shift out of his anger and into the mild mannered Bruce and imagine his embarrassment when he realized he deserved the ‘Himbo’ title that Natasha had bestowed upon him when he confided in her about his dilemma in private.

Just a quick reminder that you can read all of ice planet (so far) on ao3. I’m planning on getting up to at least 9 chapters, as this is a bit of a passion project for me, so it’d mean a lot if you gave it a read 🥰

(a.n: oof its been like 6 months since the last update ANYWAY enjoy the angst and love. for those of u not caught up, the boys are stranded on an ice planet, and thors powers have gone haywire and almost destroyed the ship.)

The two had made a careful camp, in the wake of the ship, and it was almost comforting in a weird sort of way. The ships wingspan protected them from the falling snow, and the fire that blazed in front of them from the small amount of wood they’d been able to gather was comforting.

Oddly, it reminded him of home. The smell of smoke, and the warmth of a companion next to him. It was like his childhood had come back in full colour - the dark blue shade of the night  sky, orange and yellow flames illuminating the underside of their faces. All they needed was a few good ghost stories, and they’d be set for the evening.

“we better be in the next one” you heard him talking about next thor movie and well, they are not wrong about the best marvel movie tho,,,

Wow, I thought I’d be writing this later on, but the seasonal depression decided to hit hard and fast this year I guess.

New Years came and went, nothing too special, and then things just went downhill. Rain came soon after New Year’s Eve and made everything cold and wet and it’s put such a damper on my mood that I don’t want to do anything.

The last couple days it’s been a struggle to get out of bed, I really hate this time of year. The cold and darkness makes it hard to stay motivated or excited. I guess I’ve been desperate to stay warm or at least give the illusion I am so I’ve been taking a lot of baths. Thor has joined me quite a few times but I’m worried the amount of baths I’m drawing is getting to be too much for him. He was fine with joining me the first couple times but now I’m worried it might be too much of a commitment.

If I’m not in the bathtub I’m trying to keep my spirits up and not focus too much on the outside circumstances. I’ve been watching some home renovation shows that take place on tropical islands, stuff like that. It’s definitely helping.

I’m hoping we get snow later this week. When it’s just cold and wet it’s depressing, but snow helps lift the spirits and such and Thor mentioned possibly going sledding if we do get some snowfall.

I had to look at my phone before writing down the date. This entry could honestly cover the last 5 days, seeing as were all stuck in the post-Christmas limbo.

Christmas was good. Really fun actually. Tony had the idea of getting our kids together and have them all open Christmas presents with all of us. Tony and Pepper brought Morgan, Scott and Hope brought Cassie, and Clint brought Kate. It was…really nice. A little too loud for me, but if laughter is the loudest thing I’ll endure again, I’ll gladly accept it.

Thor and I have just been lying around the house doing nothing. Pretty sure we’ve watched 20-something movies at this point and could feed a city with the amount of takeout he’s ordered. When we aren’t vegging, Thor has been trying the new guitar and he’s got the nack for it. It brings a smile on my face to see him play.

bruce: god has forsaken us

tony: existence is a prison

someone send me like. the pining-est fics ever pls i want the desperate longing the cheesy ridiculously fluffy nonsense in fact i Need it i actually need it ok so. gO

does anyone know of any good fics where tony or steve [ or both ] like ,, help thorbruce get together ?? pls this is such a god tier concept in my head but idk of any & i am in Desperate need

thunderscience bc they are my favs in mcu 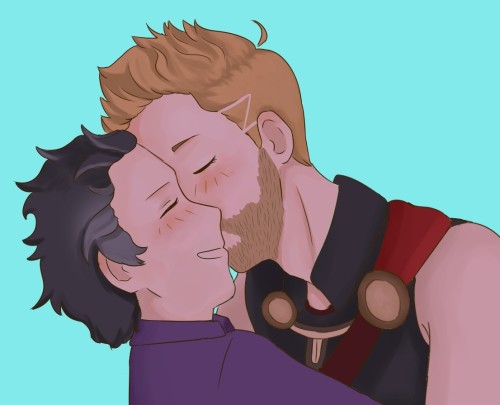 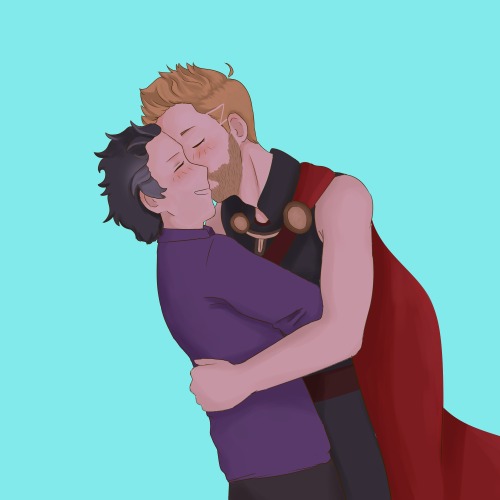 (The sequel to Alone is here! I had a few requests for there to be a part 2 to this, and with my christmas trade with @astrobruce coming up i figured what better way to wrap up the decade than with a prison break. Enjoy!)

He didn’t know how long they’d both been there. There was a lot about their current situation that he found he didn’t know, really. Their location, for a start. He couldn’t feel anything of the outside air, as if the sky itself had been closed off from him. Thor hadn’t felt like that since…well, since Odin had cast him out, really.

At least he knew Bruce was beside him. He couldn’t see the scientist - or his green companion, but being Asgardian had its privileges. The weather may have been barred from him, but Bruce’s breathing rang true in his ears if he wished to listen to it. The coolness of the metal against his cheek as he placed his ear to the wall, the soft tones of Bruce trying to talk to him - and his ability to talk back. It made the whole ordeal a lot less unbearable.

Thor woke me up this morning with forehead kisses and happy birthdays. He claimed I was “a youthful babe in the cradle of the cosmos.” It made me smile, I know he was trying to make me feel young, but I’m not Asgardian. But then again I’m unsure of how the gamma rays affected my aging. We’ll wait and see.

Thor and I went into town for brunch and he gave me the first part of my gift which was one of those Jr. Volcano kits. We headed back to the house and put it together. I’m glad we started to give each other joke gifts. It makes things so much more light hearted and non stressful.

Tony and Pepper stopped by and gave me their gift and best wishes, I haven’t opened it yet, but they’re not here so it’s not too high on my priority list.

Thor is putting a movie in now, he says it’s my favorite but honest to god I have no clue what that is.

Not in the fandom anymore due to lack of support, but I thought I’d post this lil sketch of them before I tapped out. They’ll always be very special to me <3 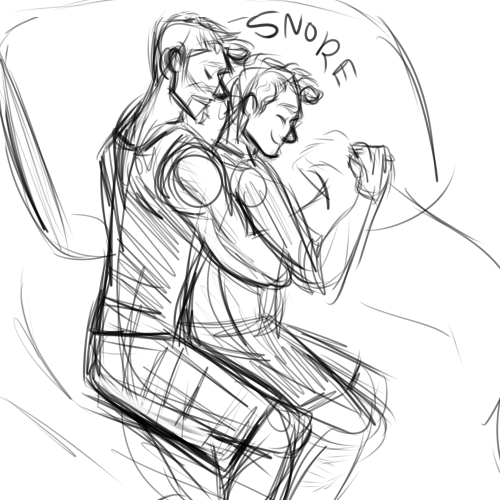 Moodboard for Thor and Bruce’s wedding that totally, 100%, definitely happened at the end of Thor Ragnarok 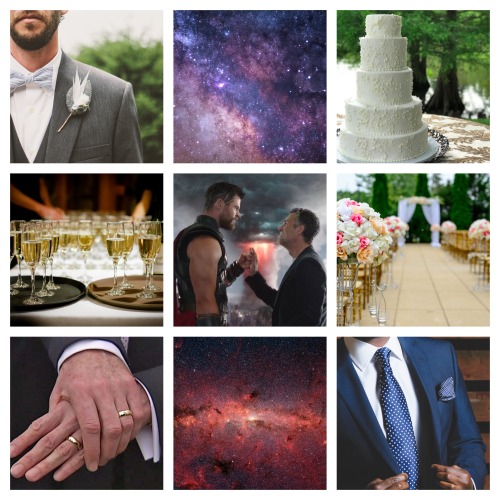 I just realized that my otps from two of my main fandoms have the same initials!

And there’s even a kinda similar dynamic between them??? Strong prince with long hair, norse roots - and a slightly nervous , well mannered, highly educated man who is reluctant to join the fighting but is a valuable part of the adventure/mission.

What do I do with this knowledge???!?

Summary: Thor is feeling homesick and Bruce helps distract him.

There were many things Thor missed about Asgard, but more than the place he missed the people, and what it entailed being around a group you had known since birth. Their traditions, their memories, all tangled up in each other in ways his relationship to the Avengers barely compared to. But he liked his team, and he liked Earth. Had only been here for a few years, which was nothing like the decades he’d spent at home, but a good start.

But sometimes, after a particularly tough battle that was celebrated in ways he couldn’t necessarily relate to (although he didn’t mind them), Thor felt a bit hollow. Looking at them all and not seeing the ways they all felt out of place, out of time, but only seeing a bond he wasn’t sharing due to not being human.

It was a selfish pain, but it was the pain that hit him the hardest.

He sulked alone, a drink in his hand that was doing nothing, with chattering all around him but never aimed toward him.

That was how Bruce found him. “Long day?”

He wanted to lie, but couldn’t find the energy to. “Very.”