Diego after Eudora dies: [pointing at himself] This bitch empty…

Diego, jumping out of a window: YEET

“Something strong, firm, muscular and full of passion” - Ivan Franko about Volodymyr Vynnychenko, 1907.

Klaus to Dave in the Vietnamese bar: I’ve noticed that we’ve slowly started to phase the b out of our bromance

Quirk: Tarot Cards-{You have the ability to use a special set of tarot cards to aid you in battle. You can use them to create force fields, teleport, and other things to help you.}

You boredly shuffled your cards as you waited for class to start, your classmates were still either coming to class or just talking until the bell rang. When you were putting them a nice stack, a card jutted out from the rest and you pulled it out, only to roll your eyes when you saw the giant heart on it.

“Bakugo,” You called out.

The blond looked at you and narrowed his eyes at you, “The hell do you want?”

“Monoma’s walking to the door entrance, can you tell him I’m not interested? Be nice about it.” You hummed, shuffling the heart card back into the deck.

He raised a single brow before walking over to the classroom door and opening it up, sure enough, Monoma was standing there with a white envelope in his hands. Bakugo blinked dumbfoundedly before looking at you to Monoma and to you again. Finally, he recovered from the shock and glared at the copycat.

“Sorry but (Y/n) isn’t fucking interested,” Bakugo growled, then slamming the door on the 1-B Class member. Denki only looked at you in shock, “That was freaky but cool.”
You smiled and shrugged, now shuffling the heart card back into the pile.

“(Y/n), you get so many confessions,” Ochako noted in awe, “I think Monoma is the fourth one this week.”
“Sixth, actually, but who’s counting?” You hummed, winking at the brunette. She blushed a little and chuckled timidly, Mina, on the other hand, was thinking about something. Finally,  your pink-haired friend walked over to you and.

“How come you never accept the confessions?” She asked, “Besides Monoma, there are so many people at this school who I think you’d look cute with!”

You chuckled in amusement, “Yeah, there are some cuties here but I’m afraid I’m kinda in a relationship with someone.”

“Bull shit!” Bakugo shouted from the back of the classroom.

You stuck your tongue out at him while a majority of your classmates were shocked about the fact that you had just decided to mention that you had a spouse. Soon, your peers started to clamor around your desk to ask you about your mystery s/o.

Before you could answer their questions, the school alarm blared loudly and made everyone flinch and cover their ears. Red emergency lights flashed brightly as Aizawa immediately woke up from his hourly nap and ran out of the room while shouting instructions to the class.

You looked down at your cards only to find them scattered on the floor in the most curious position. They seemed to make a ‘K’ shape on the floor which made you feel oddly relaxed. Snapping your fingers, your cards magically flew from the ground and into the palm of your hand then you looked over at the door where Aizawa had left.

“(Y/n)? Where are you going?” Deku asked as you started to bolt out the door. You swung it open and looked back at him, “I know who set off the alarms and I know that our teachers won’t be able to stop him. Just leave everything to me.”
Even though your words were supposed to be comforting, it still didn’t stop your worried classmates from following you out the door and completely disobeying Aizawa’s instructions. You stopped in one hallway and looked out of the window facing the front yard of the school. Your teachers were lined up side-by-side and ready to fight the threat that had blasted its way into the school.

“Look at that, Teekl, they already had a welcome committee waiting for us,” Klarion chuckled darkly before pointing at your teachers, “Let’s give them a little welcome of our own.”

The orange cat curled around his shoulders immediately jumped off and charged towards the U.A. staff. The longer it ran, the bigger it became until it was a full-on monster. Frowning, you took two cards out of your deck.

“Um…what are you planning to do, (Y/n)?” Momo queried nervously. You threw down one card on the ground with a circle in the center of it and then threw another card to the front yard of the school before turning to look at the ravenette with a mischevious smirk.

You stepped onto the circle card and disappeared, making your classmates gawk in awe. Kirishima was the first to notice you reappear in the spot where you threw the second card. Soon, your classmates were calling out to you to not do anything rash or dumb.

He looked over at you with a look of shock before giving you a mischievous smile, “(Y/n) (L/n), just the person I wanted to see.”

Suddenly he raised his hand in your direction, while you stood your ground and narrowed your (e/c) eyes into his onyx ones. Red magic soon sparked at the tips of his fingertips as he cackled evilly.

“I’ve been saving something special for you.” He hummed before sending a magical projectile your way.

You made no attempt to move, much to Class 1-A’s surprise and worry. In fact, the magical projectile hit you and engulfed your figure in a cloud of smoke. Everyone felt their heart drop when they heard your shrill scream ring in the air but they couldn’t see anything.

“(Y/n)!” Your classmates shouted as Bakugo was ready to attack the Chaos Lord.

However, they were very confused when the smoke cleared and you were holding a bouquet of black and red roses close to your chest and nuzzled your face into them. Even your teachers stopped fighting the giant cat to watch in disbelief as you giggled like a lovesick schoolgirl. Meanwhile, Klarion was walking over to you with a bounce in his step and a wide grin on his face.

“Do you like them? I had Poison Ivy breed them specifically for you!” Klarion hummed as he waited anxiously for your answer. “They’re beautiful, Klair-Bear! I love them!” You gushed, now looking at him with a wide smile. Klarion’s grin widened proudly as he wrapped an arm around your shoulder, “I knew you would! I thought they would compliment your lovely (e/c) eyes!”

You giggled once more and some of your classmates were in disbelief that you were actually blushing. Klarion was about to say something when a low and annoyed cough caught both his and your attention. You both turned to look at Aizawa, who had Teekl nestling herself between his legs, and his arms crossed over his chest.

You looked from him to Klarion, who had a small grin on his face that you mimicked as you looked back to his teacher. “It’s pretty simple,” You shrugged before leaning your head onto Klarion’s chest, “My boyfriend just stopped by for a visit!”

Klarion pressed his lips to your forehead to prove a point. Both of you enjoyed the shocked faces of all your classmates and teachers.

Just had to say it

Klaus: I see a light…

Diego, holding a flashlight: He skinned his knee.

Bnha Poly Au ITS MY IDEA I CLAIM IT!!!! Let me know what you think about it! I’ll be posting up some headcanons about whats its like in a day of this messy relationship! It’s gonna be hilarious and wholesome. Basically, almost everyone loves almost everyone and its a big mess of teenage hormones and feelings and poor Aizawa and UA teachers have to deal with it. 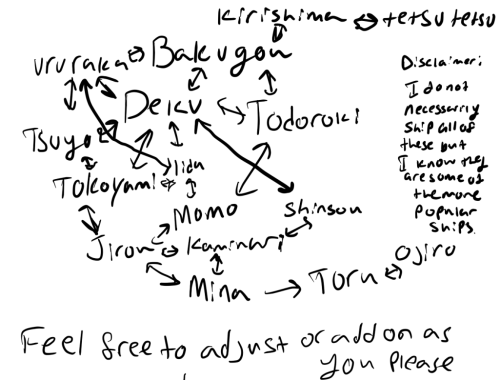 Talk about a poster child! 😂

The Umbrella Academy: Run by an old, eccentric, famous guy, lots of division between kids because of attachments to labels, learn how to attack people, a 17 year old kid dies but is still around

Hogwarts: Run by an old, eccentric, famous guy, lots of division between kids because of attachments to labels, learn how to attack people, a 17 year old kid dies but is still around

A gift to the universe

Another reason I’m so excited to for season 2 of UA, is because i really like watching it with my mom. She just makes wild crazy ass predictions throughout. Like it’ll be the most obvious foreshadowing/setup/whatever & she’s just completely wrong. Like when she saw Luther’s gorilla body, she gasped & said with full confidence “Pogo’s the real father! Isn’t he?!” And I did not know how to respond. Or she’s given absolutely nothing & is dead accurate. Like when Klaus came back to the present all she saw was the glimpse of his hands & “Oh no, he went to Vietnam…”. There is no in between.

#i just stared at her and she went, #‘What am i just totally wrong again?’, #and i said ‘no youre dead on. how? how did you guess???’, #her response was, #‘the bloody hands...and he was sad. therefor...Vietnam!’, #she added later ‘he was also wearing green...therefor vietnam!’, #its fun, #also her yelling out ‘i dont want My Diego to die!’ during the fight w/ chacha, #UA, #don’t listen to me, #i wish i could remember what type of show she thought it was gonna be similiar to beforehand
0 notes · See All
Next Page