Yesterday my friends (gently) scolded me for not planning anything for my birthday. And as I opened their gift and proceeded to tell them that I was happy but also incapable of expressing enthusiasm, they were like: yeah, we know.

And I did feel known. After that I went home with my belly full and my heart even fuller.

They are just another way to hide the face.

What is your character’s opinion of and experience with tradition?

What traditions did the character grow up with throughout their childhood? How did these traditions affect their mental, emotional, and relational development? For example, one might have a tradition where their family pays their respects at the local temple on the last night of every week. As they grow up, perhaps they’re more open towards the clergy, or maybe they find themselves praying in difficult moments even if they themselves no longer keep the faith.

How have their cultures affected their perception of tradition, in both positive and negative ways? For example, one might come from a society that places a deep emphasis on maintaining what has always been. This could leave a character clinging to rules and laws whereas others would abstain from them.

How does this character’s perception of tradition affect their relationship with other characters? For example, a character who rejects tradition might not understand their ally who keeps to their only known way of life. 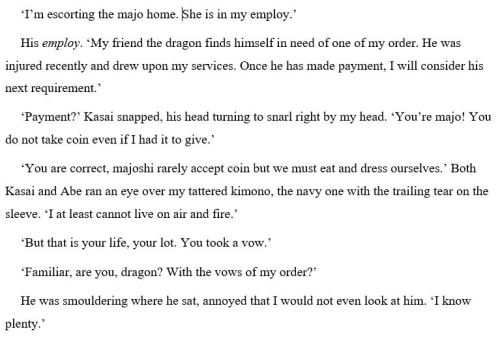 Tall space looks massively down
On little you, a tree dwarfed speck,
Among the leggy brambled undergrowth.

Remnants of the day play
Something like a last fiery note
Upon a long, deep, old,
Forgotten, mortal-forbidden tune.

Of which the faintest notes float
Somehow through your ears
And you shiver at the half-caught
Thought which suggests with awe
And perhaps a little fear a sublimely clear
Harmony, maybe, or something more.

While listening to the rain his the window pane

You make me want to give you everything I’ve got , just take it all , I’m willing , it’s whatever you want

You make me want to spend a lifetime , watching you be goofy, cook my favorite food & just hold me close and never let go

And once again I break

To myself for this day.

A war between remembering and forgetting.

Synopsis: A young parasaurolophus makes a discovery that will doom his world.

Given my love for apocalyptic sci-fi and my love for dinosaurs, a story combining the two was an inevitability. This was mostly inspired by a short film I saw a couple years back. It was a very simple depiction of a “grey goo” apocalypse, but it stuck with me. And, since the exact cause of dinosaur extinction is still up in the air, the gears started turning: what if the dinosaurs were killed in a “grey goo” scenario?

There are probably some scientific inaccuracies. This was intended as a creative writing exercise first and an accurate depiction of prehistoric life second.

The midday sun beats down on a perfectly average Cretaceous day. The temperature is a balmy 87º, and the skies are clear of clouds. A river lazily meanders its way across a thickly-forested valley, the trees occasionally interrupted by patches of open meadow. The thundering footsteps of a herd of sauropods can be heard in the far distance.

Along the bank of the river, a small family group of parasaurolophus are foraging. The hadrosaurs dip their snouts into the muddy stream, and raise them with beaks full of water plants. Though parasaurolophus usually browse on tough woody twigs, they sometimes indulge themselves on the softer, sweeter foliage surrounding the river. As an older female keeps a watchful eye on the tree-line, the rest of the herd seems content to ignore their surroundings as they gorge on the soft reeds.

Except for one. A teenage male has wandered away from the safety of the group and ventured deeper into the forest. He has grown bored with the lengthy meal and decided to go exploring by himself. He moves cautiously through the trees, watching every shadow with fear, anticipating a t-rex waiting to jump out at any second. However, he encounters no predators on his walk.

What he finds is so much worse.

After a few minutes, the parasaurolophus reaches a clearing. The first thing he notices is the noise level. He can still hear the sounds of the forest, but the clearing itself is almost completely silent. There are no birds, no pterosaurs, no other dinosaurs in the area. Were it not for the low carpet of ferns and grasses, there are no living things of any sort.

The second thing the young dinosaur notices is a mysterious puddle in the exact center of the clearing. Warily, he approaches the puddle. It is unlike anything he has ever seen. It looks almost like water, but it is a deep black color, and its surface is oddly shiny—the parasaurolophus can see his own perfect reflection in its surface. And it looks as though it is getting larger as he watches. Gingerly, he leans in and sniffs the mysterious substance. He does not recognize the scent. In a final attempt to identify the substance, he reaches out one of his forelimbs and touches the puddle.

Immediately, the “waters” of the puddle shoot up and engulf his arm. The black liquid flows upwards at an astonishing speed. He pulls back in shock, but it is too late. The black substance is covering his front leg up to the elbow, and is still spreading. To his absolute horror, the parasaurolophus watches as his arm dissolves, the black fluid sloughing off of his body to join the growing puddle on the ground. As the substance continues to cover his entire body, the dying hadrosaur gives off a last mournful howl before completely melting into a pool of black.

The puddle was a swarm of self-replicating nano-machines. Where they came from or how they got there was unknown—all that mattered was their mission. They were programmed to do one thing, and one thing only: make more of themselves. Every molecule of organic matter that they came into contact with was rearranged and repurposed into another machine, thus growing the swarm and spreading the infection. Up until now, they had spread slowly, consuming things like dirt and insects, whose small size limited the rate of replication. But, they had just eaten a 900 pound hadrosaur.

2 hours later, the swarm had completely consumed everything within two miles of its landing point.

After 12 hours, everything within one hundred miles.

72 hours after their initial discovery, the nano-machines had consumed every particle of organic matter on the planet Earth.

Electric blitz running through her veins
Untampered and alight with the oxygen
She stole from those she deemed less worthy.
She’s got a pack of playing cards in her pocket
And she likes to play at the worst possible times.
Oh, but she’s always grinning, always feeling good
About herself and those around her.
And she’s more willing to pull you up after
She has already climbed that high wall.
She likes to speak in languages
That neither you nor I know, but it’s fine
She makes me laugh anyway.
She confesses her love in Arabic, because
She says, it’s the kind of language you use
For that kind of thing. I don’t return the sentiment.
I don’t plan to.
You, however, a little obscene
Tell her you love her in English
Because that’s all you’ve yet learned
And I have to swear, to both of you
That I don’t feel left behind.

#poetry, #poem, #mine, #writing, #uhhhhhhhh polyamory?, #i like the story here but idk what to do with it
0 notes · See All
hello-confess-to-meText

(Something I wrote a little while ago. If any of you like this let me know if you want a part 2)

You heard a blood curdling screach and shot out of bed anxiety gripping you in it’s vice. You looked out the window at your neighbour. She was staring up
straight up at the sky eyes wide and screaching loud and long, seemingly her lungs never need to be filled. It seemed as if she was in a trance screaming, and
screaming, still staring wide eyed and pale. You phone buzzed briefly you turn around away from the window and pick up the device. it’s an official alert you look
confused but open the message “DO NOT LOOK AT THE MOON” the official alert read that and only that. You shrugged and closed your phone again.

Hearing another loud shreak from your neighbour you slowly walk toward the window before frezing. “The alert said to not look at the moon….” You mumbled to yourself
sitting on the floor when you hear a horribly loud amount of shreaks. You pull your legs up into your chest slowly starting to rock yourself. Breathing slowly.
Your phone buzzes again you figure it’s another alert so you shimmy closer to your bed where your phone is resting, you grab it and see that it’s not an alert but an
unknown number, opening the message you look for any signs it could be one of your friends but you can’t see any, when you actually read the message it’s written in a
cryptic way. This isn’t like any of your friends, “It’s a beautiful night tonight. Look Outside?” You mumble quietly reading the text outloud. After reading that
message another one comes through from another unknown number, it’s the same message from a different number, the buzzing on your phone becomes more frequent,
it seemingly gets louder and louder.

You shift back flat against the wall, you slide down the wall ensuring some sort of grounding place before assuming the position you were in earlier, chosing to this
time rock yourself slowly as the buzzing defens you, it’s constant shreaking and constant buzzing, you never think it’ll end minuets trun to hours and you can’t seem
to focus on anything, your vision blurs and you begin to scream yourself. You’ve not even looked outside or at the moon, but you scream anyway joining the
cacophony of orchestral screams. Slowly rising and standing you silence yourself after what seems like 10 hours, you go very slowly to the door. Eyes still blurry
head pounding, buzzing still reverberating against your skull.

Pulling the door open you brace yourself trying to think of anything, anyone or just something that can make the horrible noise stop. You mindlessly walk out of
your apartment and take a deep breath staring up into the sky, you squint a harsh bright light burns your corneas as if you’ve never seen sunlight before, just like
that your vision slowly deteriorates back to normal your head stops pounding as hard, dying down to a stop. You look around at the apartments, your neighbour is
passed out on the grass out front, cautiously you walk up to her and see that she’s flat out. You look round the neighbourhood to see all of the people out on their
front lawns, there was one still conscious. A little girl you recognised her.

Do you have an original fic/novel that you’ve been working on for years?

pearly white cages
through which we let slip
laughter and rages,
desperate grasps through the spaces.

we reach with our tongues
for grip on another,
and, too, fill our lungs
through gaps in our slanted rungs.

but ire like a cordon,
off, solitary,
mind a cruel warden,
sets aflame the jail garden.

empaths underneath
with understanding detained,
we trap our sympathy
behind the clenching of teeth.