We looked inside some of the posts by a-suibian-kind-of-lifestyle and here's what we found interesting.

Rating summaries for The Untamed, based off completely arbitrary things

Big LWJ fan energy. Jingyi definitely wrote it. I love it. Unfortunately, the phrasing is a bit clunky, and reads as if it were cut off halfway. Perhaps Jingyi wasn’t warned of the character limit. 5/10

Its pretty good. Short and sweet. Doesn’t wimp away from ‘soulmates’. 8/10

Unsure what to focus on: “fast friends”, the fact that this only mentions the first third of the plot, or how it calls Wen Rouhan a mastermind. Funny but confusing. To be fair, I’m pretty sure this is an automatic translation because I had to noodle around forever to get it in English so it gets a bit of an excuse for that. Funny but confusing. 2/10

Amazing. I can’t decide what I like better: “good friend” or “solve a series of murder mysteries”. Sounds like a shitty buddy cop comedy. 10/10

Renowned actor Lan Wangji is known for his crisp and cold expressions when he is out of character. So who, then, is the single person that can manage to break through his icy exterior only to turn him into a gawking and speechless mess?

Nie Huaisang has favorites among his fans. Some have the nicest designs, some are so comfortable to hold.

It’s none of these he finds himself returning to every time he has to interact with Jin Guangyao.

It was a rare frivolous present from Nie Mingjue, even rarer because it survived the fire.

Its edges are a little too uneven, the wood a little too rough. If he holds it too tight, he has to clean it later from the tiny bloody cuts it leaves.

He has to clean it very often.

That’s not much of a problem, though. It gives him time to calm the seething anger and hate that wells up every time he has to restrain himself from wrapping his hands around a murderer’s throat.

Over time, it finishes absorbing what it needs.

Nie Huaisang never notices when the fan gains an aura of its own, a gentle fog that misdirects people from things he doesn’t want them to see. He doesn’t notice when the tips sharpen, when the paper becomes a fine razor edge.

When the shield becomes a sword.

#honestly nhs developing some kind of fan-cultivation technique, #would be so fucking amazing and badass, #it's one of my favourite headcanons, #nhs
724 notes · See All
a-suibian-kind-of-lifestyle·19 hours agoText

Lan Wangji: Why are there little hand prints on the wall?

Wei Wuxian: [turns to Sizhui] Why are there little hand prints on the wall?

Wei Wuxian: He has little hands 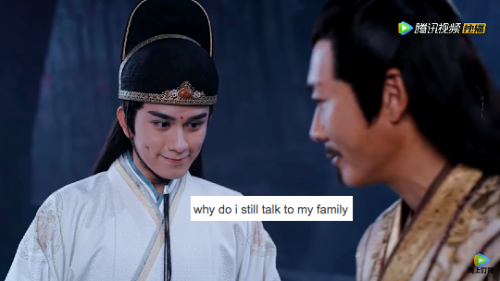 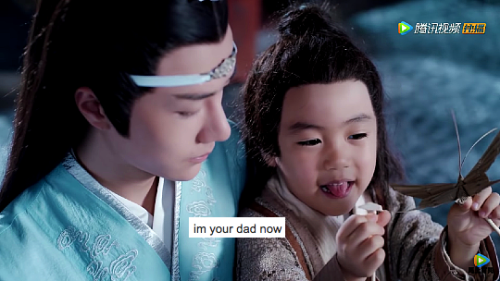 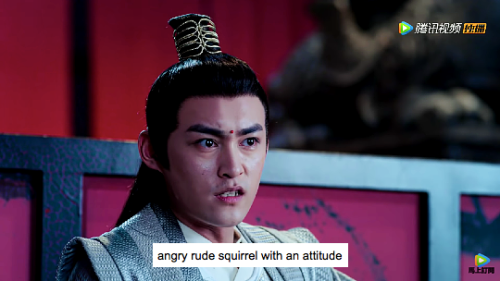 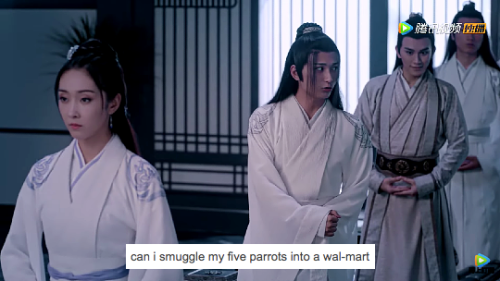 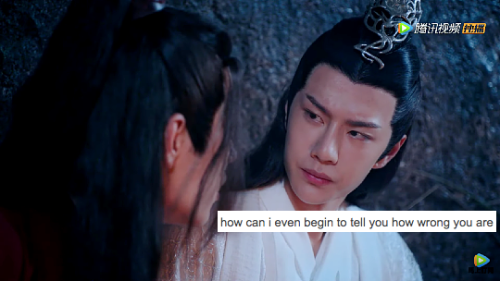 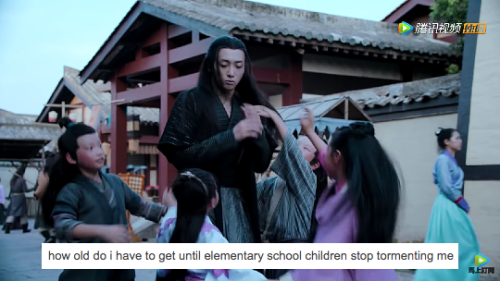 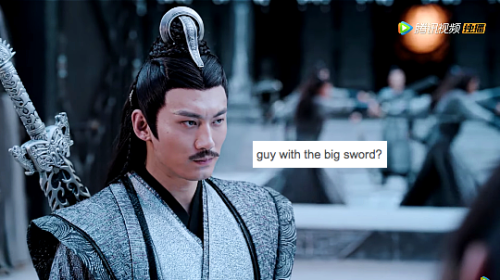 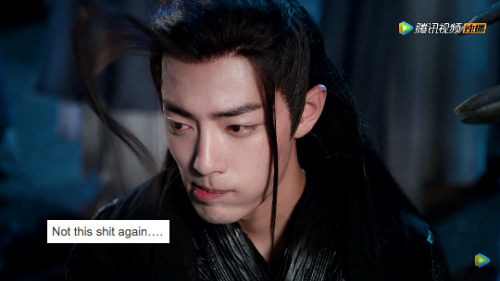 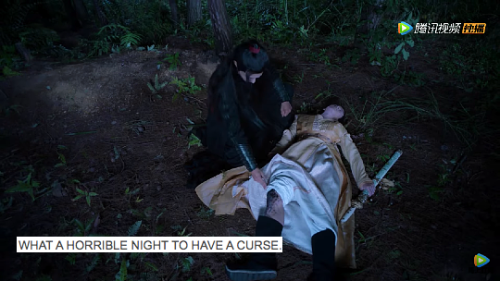 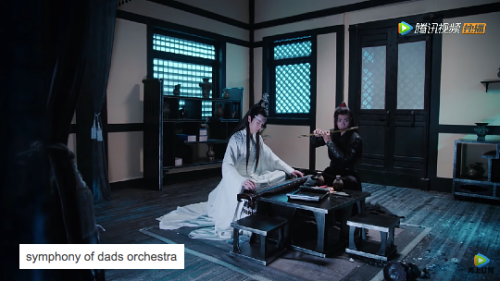 Wwx and Lwj get turned into ~6 year-olds

All the elders and Lxc are out, so the junior disciples have to babysit. Naturally, having heard all the stories from back when they were teenagers, they expect Wwx to be a chaotic force of nature as a child. They are pleasantly surprised that he is as docile as they come; only to have their world turned upside down by the terror and destruction 6yo Lwj wreaks upon them (possibly pulling wwx along with him after some time)

As always with me and fandoms, I have way more fanfiction ideas than motivation and time to write all of them.

So I thought I might start to share them on this blog as prompts so anyone who feels inspired can use them to write their own story!

Hmm, I think that’s it for now!

I hope you’ll find some prompts that you’ll like. I can’t wait to read any fics you guys might write 😘

Lan Wangji should refuse. He should. He looks back down at the mask. Beneath it is the soft creamy paper of the invitation. He could present this at the door and slip into the palace and—

Before the last word got to leave his mouth though, he saw Lan Wangji standing before the procession, looking extremely disheveled for The Emperor Lan. He looked helpless, desperate and almost at the verge of tears. Wei Wuxian knew because he knows Lan Zhan, has known him for years, better than anyone else in the world.

He let out a shocked “your majesty” to which Lan Wangji swiftly turned towards, like a sunflower that had been deprived of the sun for a long time and replied with shaky breath and a mumble of “ Wei Ying” that carried a mountain of inexplicable emotions behind it. The next moment, with his slightly red eyes still boring into Wei Ying’s beautiful dark ones, he knelt.

Back from a Discussion Conference, Lan Wangji is sleep-deprived and doesn’t remember he’s married to Wei Wuxian.

An angel looking at wangji

A devil looking at wangji

#this has me in fucking tears, #the acting asdfghjkl, #wwx, #lwj, #yiling laozu, #before and after
58 notes · See All
a-suibian-kind-of-lifestyle·3 days agoPhoto

“Wei Wuxian and Lan Wangji are two completely different people. For example, Wei Wuxian is completely irrelevant to the plot, while Lan Wangji is the most amazing character ever. In this essay I will”

#I'm fucking crying, #review, #amazon prime, #the untamed, #lwj, #This series has nothing to do with wwx, #it's all about lwj
4K notes · See All
a-suibian-kind-of-lifestyle·3 days agoText

why is this so funny to me?!

thanks to @madtomedgar & @spaceataraxy​ this is now all i can see 🤣

#text posts, #nmj
606 notes · See All
a-suibian-kind-of-lifestyle·4 days agoLink
the stars in the hazy heaven tremble above you - Chapter 1 - cicer - 陈情令 | The Untamed (TV) [Archive of Our Own]https://archiveofourown.org/works/24925561

Wei Ying first hears about the ball over dinner.

“They’re trying to marry off Second Prince,” Fourth Uncle says, through a mouthful of stew. “There is going to be a ball, for all the gentry.” “Everybody who’s rich and titled, who’s got a son or daughter the right age, will be invited. Second Prince will pick someone out.”

“He’s probably very stuffy and full of himself!” Wei Ying snorts. “I pity whoever has to marry him!”

(In which Wei Ying, a fugitive from justice, sneaks into the palace, steals from the imperial family, and eats his words.

AKA, yet another Cinderella AU.)

#Children listen, #i am sobbing from all the feels, #do yourselves a favour and read this fic, #fic rec, #fairytale au, #emperor au
1 notes · See All
a-suibian-kind-of-lifestyle·4 days agoPhoto

#hey! hey jiang cheng i saved you a seat!, #come sot with me so we can gossip about all these stupid old men, #they are baby, #nhs, #jc, #so adorable, #the tiny smile, #it's like they are in school and its fmthe first day, #and nhs is like
435 notes · See All
a-suibian-kind-of-lifestyle·5 days agoLink
Win a Date With Lan Wangji! - Leffy - 魔道祖师 - 墨香铜臭 | Módào Zǔshī - Mòxiāng Tóngxiù [Archive of Our Own]https://archiveofourown.org/works/22066978

“Don’t worry, Wangji. Your fans are nice,” Lan Xichen assured him as they were being driven to the restaurant. “Of course, except that person who tried to pull a strand of your hair, and that woman who attempted to enter your apartment, and that boy–"

The story where Lan Wangji has to date his fan for a night.