nostra || 21 || FR || they/he DO NOT REPOST MY ART please dont ask me about what comics to read im jared 19, i cant read and dont know shit || can sometimes post #suggestive art 🚨

We looked inside some of the posts by acidulication and here's what we found interesting.

With your shifter au, do you think the Batfam would ever get confused with all of the cats Damian has as pets and Tim. Like maybe, Tim would purposely hide amongst Damian's cats, and everyone knows Tim is in the cat pile, but there's just so many of them, so which one is he?

there is confusion at first but they find him quick first of all bc dick n jay have a special timmy radar (its a big brother thing) and also bc he got lil scars under his right eye !! tim def hides in cat piles tho didnkdndkdn siblings tiring

DIFNDINDIDNID WHAT A MOOD HONESTLY

this isn't a jab or anything I'm genuinely asking, were the drakes really horrible to Tim?? The most I remember is that they just weren't like. Around very often. Idk though.

mmm from what ive seen they were mostly not around which was convenient for dc authors at that time for tim to be hanging out with bruce as robin, and it probably wasnt written to show emotional abuse or abandonment, but it can be read as such nowadays.

and ive seen the posts recording some of jack drake being bad at being a dad, but they were pretty tame in comics

#i can remember reading some of n52 stuff w the drakes being ??? loving or whatever but also what the FUCK was tim drake in n52, #Anonymous, #ask me, #but also tim drake has depression and 98% of tim stans also do and we're like, #this boy must be depressed for a reason !!!! it cant be ONLY batman, #lets go with complex parent issues aight
56 notes · See All
acidulication·6 days agoAnswer

I just learned hyenas eat bugs and now im thinking of shenanigans. Like someone sees a spider in the house and everyone is panicking and yelling at cass or duke to get it like ‘youre a bat and a lizard you guys eat bugs please get rid of it!’ And cass and duke are like, enjoying the chaos, so they dont, and then jay just like, shifts and eats it n theyre all just like staring at him like ??? Like the awkward party meme.

dick after being rescued from a spider by jay : friendship over with cass and duke now jay is best sibling

In your au is Jason’s laugh as a human kinda hyena like? Are any of the shifters behaviors as humans influenced by the animals they can shift into?

not rly for jasons laugh !

but they do have behaviors as humans that are influenced by their shifter form known as : the Loaf form for most of them except cass n duke, lounging in the sun for duke, trying to climb on bruce’s shoulder for cass, silly time at the sight of dangly things for tim dick and also selina, bumping heads against things to show affection for most of them, biting on things all the time for steph including other peoples hands, trying to find small places to feel safer for tim and cass, blep for duke, huddling for warmth for all of them like all the time, and many more.

#duke should be allowed to Blep at all times. thank u., #shifter au
69 notes · See All
acidulication·6 days agoText

ive been thinking about how different life would have been for tim (and also the bats) if the drakes had both stayed alive……….

#thoughts ?, #im so sleepy cant share what ive been thinking but, #basically things Bad tim 19 and traumatized, #but ye im curious what would have happened...
50 notes · See All
acidulication·7 days agoAnswer

I adore your Shifter Au! I was wondering about Roy in this Au. Is he a shifter?

Thank you so much for providing this amazing Au to us! ❤️

thank you!!!! roy is human but lian, his daughter, is a serval cat shifter ! and also roy n jay are dating

I've been reading and following the TimKon fic Baby, Talk me down (take me out) from one of your fic rec posts. All I can say is THANK YOU! I love this story so much! By any chance have you drawn any fan art of this story?

I unfortunately have not !!!! i might one day (chapter 9 u know the scene im looking at) if i get the energy

Nostra: I love Tim Drake he’s one of my favorite characters! Also Nostra: Anyways, here’s some fanart of him slowly losing the will to live :D your tears inspire me~

#ask me, #i have depression
34 notes · See All
acidulication·7 days agoAnswer

I've been reading and following the TimKon fic Baby, Talk me down (take me out) from one of your fic rec posts. All I can say is THANK YOU! I love this story so much! By any chance have you drawn any fan art of this story?

I unfortunately have not !!!! i might one day (chapter 9 u know the scene im looking at) if i get the energy 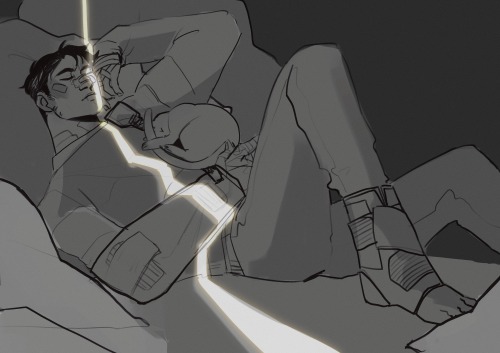 For your shifter au, does Jason become slightly catatonic after the whole joker ordeal?

i dont think catatonic is the word bc i think that has to do with brain damage ? and no hes mostly traumatized and dissociating and in pain and scared of most things for a few weeks,,, it gets better but he has ptsd from the event

#tfw a mad clown doses ur big bro w something that makes him look like hes dead and threaten ur littlz bro and beats u up, #ft blood phobia bc he bit the joker as hyena and it was to protect himself n his fam but, #traumatic., #shifter au, #ask me
64 notes · See All
acidulication·8 days agoAnswer

#my brain is only timkon ship, #and batfam fluff, #im sowwy, #ask me, #i rly miss them tho
35 notes · See All
acidulication·8 days agoAnswer

Is there any chance that you'll ever make some batlantern art???

the chances are not zero 😌😌😌

a first kiss on the battlefield 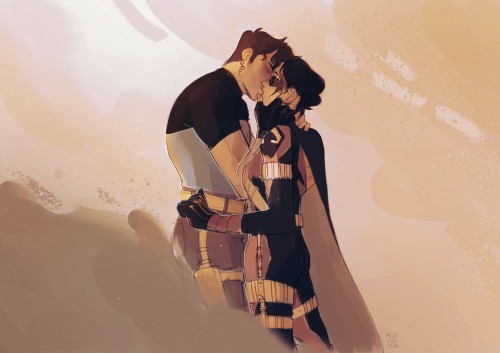 OK SO its rly vague and self indulgent but first

hal gets in trouble on a planet n sends a message for anyone tunned into jla’s waves or whatever and core four are close by so they come help except shenanigans happen and things get worse and there is like a whole War between parties on the planet hes stranded in and its grim and dark and nothing is good and the jla comes help but things look hopeless,, i mean, its war, there are casualties, and YEA anyway tim n kon are finding out that they have feelings for each other but dont rly speak it out yk ? and like its like the little glimmer of hope and light in a grim story, two young people finding love that was there all along ? and then on the battlefield there is a moment where their team has to separate and it hits kon that he might lose tim and that it might be the last time he sees him, and he just, cant keep it like that, and he reaches out for him and kisses him and its a moment where light goes through the clouds and its beautiful and hopeful and . yeah

catboys have no rights

D: we have never done anything wrong in our lives ever

#my rights. taken away from me., #ask me, #friend
59 notes · See All
acidulication·9 days agoAnswer

i was gonna give you love on the core disaster server but then i realized that you left!!!! so my love has to go here!!! your work gives me so much serotonin and i love it so much!!!! keep doing what you're doing because we LOVE you!!!! -a fan!!

y’all ever just.....scroll through nostra’s blog and be amazed that every single post they make is Quality Content bcuz i do 🥺🥺