We looked inside some of the posts by alpine-mountains and here's what we found interesting. “airbenders are able to warm themselves with only their breathing”

ok so this explains why katara and sokka were bundled up in parkas galore while aang was just walking around in his little jump suit like it was a perfect summer evening. I’m so glad this was cleared up. I literally thought Aang’s optimistic attitude is what kept him warm, heavens.

So you remember the firebender prison? And how Zuko kept his bending at full strength when he was put in the freezer box, which disabled anybody else put in there? That’s because Iroh taught him that airbender trick, just like later he taught him waterbending moves to deal with lightning. Iroh was secretly master of all four elements and passed it on to Zuko without him noticing.

#iroh was proof that the avatar might be able to BEND all the elements but, any bender can use the techniques of the other elements to support and further their own native element, because all of nature is connected, the avatar is the truest form of that connection but the failure was in believing that, the existence of the avatar meant the other elements were considered harmonious but disparate(x)

Since I haven’t seen any mention of it yet, except on twitter, i’d also like to remind everyone that not only is June LGBT pride month, but it’s also Indigenous History month!

Please take the time to support, uplift and remember your Native, First Nations, Aboriginal and otherwise Indigenous friends and family. We are here, we exist! We have a long and winding history that deserves to be heard and respected! The word ‘Indigenous’ is so wonderful, and so expansive, and includes so many different cultures under its arms. Go out, learn about our histories and our cultures. Talk to the Indigenous people around you! We’re everywhere!

And not only that, but also be sure to give extra support to LGBT indigenous voices in this community. We are a minority that is scarcely acknowledged, and in desperate need of it. Too many times have I gotten strange looks for being so openly Native and so openly a lesbian. It’s as if that combination is impossible for people to understand. Support our content, buy from our stores! Or at least just include us!

I’d like to wish a happy LGBT pride month, and a happy Indigenous History month to everyone, but especially us LGBT Native folks. This really is our month to be open about ourselves, and I sure intend to. 💗🏳️‍🌈

jet, bursting into the tea shop and pulling a weapon on zuko and iroh: these two are FIREBENDERS they’re here to DESTROY THE CITY FROM THE INSIDE we have to STOP THEM

zuko, putting down his teapot to draw his swords, not even going to argue with jet: finally, a reason to beat up a customer

What to do if police officers arrive at your home

Old art I never finished or posted (for obvious reasons)

hmm, id say, for obvious reasons, this is fucking perfect as is 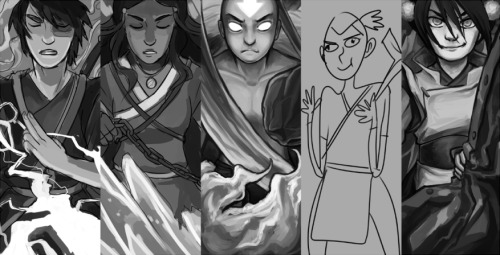 It has been five days since Tony McDade, a Black trans man from Florida, was shot and killed by a police officer.

At the time of this post, it has been almost 19 hours since David McAtee was shot and killed by the authorities.

This week has served as a stark reminder that those who have power in this country wield it recklessly and violently against Black people, non-Black POC, and trans people. For some, the power is found in their badge. In others, it’s their skin tone, their socio-economic status, their cisgender privileges, or any other number of privileges one can have. In 2018, with at least 26 trans people who were murdered, all but one was a trans woman, and all but one was a person of color. According to data collected by Human Rights Campaign, this pattern is all too common. It should also be noted that the number of trans people who are murdered is grossly underreported, with many families and newspapers often misgendering those who can no longer speak up for themselves.

On June 28, 1969, the Stonewall riots began as a response to the constant police raids of nightlife establishments frequented by the LGBTQIA+ community. That night sparked a revolution, with many eye-witnesses crediting Black and Latinx trans women for being brave enough to ignite what would become one of the most pivotal nights in LGBTQIA+ history. Without Marsha P. Johnson and Sylvia Rivera, there would have been no uprising. Without them, there would be no Pride.

At this moment, it would be tone-deaf and insensitive to commemorate Pride in the same celebratory fashion we usually do. Instead, we’re asking you to make the commitment to better the lives of the oppressed. Do the work to become actively anti-racist if you are not Black. Spread the word that Black lives matter. Spread the word that trans people deserve to feel safe wherever they go. Reblog this post, make your own, or find someone in your life who doesn’t understand and do your best to make them understand. Donate if you can.

The first Pride was a riot. We stand with you.

HAPPY PRIDE MONTH Y'ALL!! I figured i would draw trans link because i can.

Instagram version looks different because I realized after sleeping that he was too light lmao.

this was the best scene in sonic boom

i understand that not everyone can donate rn even if they really wanted to. i myself am currently unemployed and cannot donate much more than i already have atm !! not donating is okay - pls don’t feel guilty if you do not have the means to do so.

if donating is not a possibility right now, ive found this 1 hour video you can watch on youtube where all proceeds from the ad revenue will go to an organization to help the cause (more info in the video’s description). op has compiled songs and art from Black artists to listen to. you can leave it on to play in the background or plug in earphones and go about your business as usual. it can’t get more simple than that.

as a fandom that’s known to mass stream, it would be amazing if you could channel that energy into watching this video !!!!!

in the comments there are plenty of tips to make sure youre streaming it correctly, here are a few i compiled