We looked inside some of the posts by ao3feed-dadzawa and here's what we found interesting.

Aizawa and Shinsou have a training sesson after Class 1-A’s survivor training with the collapsed bulding.

More of an Inconvenience than Anything Else
by IidaRei98

“I had a fit but I’m fine now. That’s it. Sorry for bothering you,” Bakugou finally admitted.

If it didn’t hurt for Aizawa to widen his eyes, that’s exactly what he’d be doing.

Parental Dadzawa and a pissed off Bakugou - but what’s new?

Series: Part 2 of The Reluctant Dadzawa of Class 1A

Partners and Names
by Mayfly Recoworder

Eraserhead and Jade have worked together for years. This night seemed a bit different.

Series: Part 7 of Random one shots

Midoriya comes down with a fever, sudden and intense.

Kaminari Denki is NOT a Failure
by bewarethebooks

Kaminari Denki was not stupid.

He’s not! Despite what everyone thinks, Denki Kaminari is very intelligent. It may not be reflected in his grades, or in some of the decisions he makes, but he can be very smart sometimes.

Or, at least that’s what he tried to tell himself.

“I’m sorry about that, kid…” And he means it. No child should be denied such basic necessities. On the subject of children— ”How old are you, anyway?”

Aizawa Shouta finds himself in a situation that, given enough time, he could probably think his way out of…but that was before he knew about the kid that has clearly been abandoned by every adult who should have ever cared for him.

Hizashi took it and his face went white. “What…is this…?” he gasped, all the air in his lungs having been sucked out.

It was a picture of their son. Hitoshi was standing by the very tips of his toes on a stool with a noose looped around his neck. He was just barely kept from choking by whatever strength remained in his strained legs. His face was twisted with the effort to keep himself upright. If he so much as slipped or his muscles gave out, he would hang.

Lullaby For A Stormy Night
by Bluejay20

Aizawa sings to his three children and husband during a frightening storm.

This wasn’t the first time Hitoshi had woken up restrained.

It was actually his second time, but that was still too many in his short thirteen and a third years of life.

In the Shadows
by BuffPuffLyrick

Aizawa speaks to both Shirakumo and Kurogiri once more in a time of need. Feeling immensely alone and trapped trying to figure out what he should do, he talks to them.

The wonderful DublinWaltz beta’d this one. She’s a wonderful writer and is participating in Shigtober!!!!!

Aizawa decides to give Yamada a break from his despair, and has Midoriya impersonate Present Mic for a day.
Things go…well, they go!

Together, We’ll Survive
by Vivid Dreamer

The group faced each other as they formed a circle, fists held out in the center. Midoriya’s eyes lit up as he spoke. “The future is…?”

Midoriya Izuku laid dying, the mutilated corpses of his fellow survivors-turned-family scattered around him. This was an inevitable outcome really. Yet, that didn’t stop Midoriya from forming one last wish.

… A wish that left him and several others awakening within the past, years before the tragedy. And that’s not the only thing that’s changed…

Regardless, they were going to prevent the future they perished in and they’ll do it together. Even if that means they’ll stir up some chaos in the process…
—
In which Midoriya and his survivor family lived within an apocalyptic future. When they finally met their inevitable ends, they find themselves being gifted a chance to go back and change it all. Now, a reset society has eight people with new mysterious abilities who are meant to save the world.

Series: Part 5 of Side Works

the edges of your eyes
by taq

Sometimes Eri wakes up in the middle of the night.

She hasn’t done it very much now that she’s living with Aizawa-sensei, but this isn’t the first time so the ceiling doesn’t scare her anymore when she opens her eyes.
–
For The Ties That Bind Us zine

Posted with Permission (reprint/edit and/or commercial use prohibited) 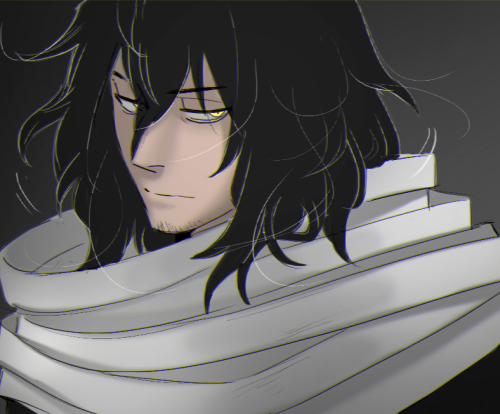 Lost Kittens in the Rain
by DomineeringScarves

Aizawa lives in the bad part of the city and so he keeps his door locked at all times. One night someone comes asking for help and he lets them in, just to find himself with a villain as a houseguest. Dabi is in a rough spot however and eventually the two settle on a truce until the storm passes.

Aka the one shot where Dabi saves a cat and gets a lecture and the similarities between him and Shouto are way too many and Aizawa needs ALL the cats.

What it takes to be a hero
by RinTrevor

Izuku is going to be the first quirkless hero but at what costs? After being told he shouldn’t be a hero from all might, he went to his dad to get training. With his brothers by his side all working to be heroes, Izuku is certain he can do it but there is something stopping him.

Luck in Odd Numbers
by IncineraryPeriphery

“Shou,” Hizashi says, slow and edging out of the way so he doesn’t get clawed, “please tell me you didn’t just kidnap someone.”

Bakugou acts weird a couple days out of the year, and the Bakusquad is curious as to what’s going on.

(ft. dadzawa, inko the angel, and one extremely dead midoriya)

Never the Good, Just the Bad and the Ugly
by deafmic

Aizawa tries to go to work on a day when he can barely stand up. His body and the people around him have other plans.

In which Aizawa’s family really wishes he’d take better care of himself.

That’s a COPY
by MeanderingMotivation

Hizashi has fun escorting his not-son Hitoshi to his homeroom class.