asdcats
All Cats Have Autism
This is a blog for anyone on the/wanting to learn about the Autistic spectrum. I do post other disability and lgbtqia things, (as well as stuff I think is really funny/neat). If you need anything tagged ask me. (Just having a list on your blog won't be any good for me). I run two events from this blog stimmysaturday and special interest Sunday. You can submit stuff for these any time. header by shaneisadragon, icon by talesofintentenselvies. Main blog/insta: theunseeliemperoress
Explore Tagged Posts
Trending Blogs
Statistics
We looked inside some of the posts by asdcats and here's what we found interesting.
Inside last 20 posts
Time between posts
50906.5
Number of posts by type
Photo
2
Video
1
Audio
0
Text
15
Chat
0
Answer
2
Link
0
Quote
0
Fun Fact
There are 44.6 Billion blog posts on Tumblr.
asdcats · 22 days ago
Answer

I’m the person who sent the anon about cats, I’ve just realised I’m a fool and meant to do that through the submit box, sorry!!

That’s okay anon you can send submissions through the ask box.

Queen of getting invited to Opioid Crisis Taskforce Meetings as a person with lived experience / representative working on Harm Reduction advocacy + programs, then getting my microphone muted halfway through.

I was invited because I worked on the decrim campaign and volunteer at a syringe program. But I was open that I’m a person who uses/has used drugs. My crimes:

1. Correcting a cop who said you mentioned dying from touching fentanyl. This myth has led to people being afraid to touch or help someone who has overdosed. It was popularized a while ago by a cop who had an anxiety attack after handling things at a crime scene. There was no evidence that this person experienced, or could have experienced, an opioid overdose.

2. Correcting someone from NA who stated that naloxone encourages people intentionally taking an overdose and then reversing it. Overdoses are terrifying, especially if you are dependent and therefore wake up in precipitated withdrawals. People who use drugs are already collectively traumatized by our supply being poisoned, and public health officials putting up further barriers to safe supply. No one is having Narcan parties ffs.

3. Stating that drug use has been a part of human behavior since the beginning of humans, and drug users deserve autonomy.

4. Stating that there is more than one way to recover, heal, or make positive changes to one’s relationship with drugs.

I spoke less times than others in the call. The moderator ignored my answers after calling on me, then fawned over literally anyone else speaking from a more prohibitionist perspective.

A couple social workers said privately that my points were accurate, but didn’t stand up for me publicly.

!!! I found a man who overdosed while driving. His car was stopped in an intersection, and he was unconscious with his foot on the break. I called for an ambulance while I reached over him to put the car in park, and the 911 operator told me not to touch him in case I came into contact with fentanyl. It is such a pervasive myth!

Thank god an off-duty paramedic pulled over thinking we’d been in a crash. She had narcan and saved his life.

When I worked for state parks, we discussed what to do if we found someone overdosed in the woods, and people were once again afraid of this exact myth, which would have prevented them from taking life-saving actions if it went uncorrected.

This misinformation puts lives at risk. If you’re reading this post and thinking, “wait, I thought that was true,” dig deeper. Listen to people like OP with experience and training.

[image description: a book titled “Sincerely, Your Autistic Child: What People on the Autism Spectrum Wish Their Parents Knew About Growing Up, Acceptance, and Identity.” Underneath the title and tag, it says “Winner of the Autism Society of America Outstanding Literary Work of the Year”. Underneath that it says “Edited by Emily Paige Ballou, Sharon daVanport and Morénike Giwa Onaiwu”.]

I’ve been waiting to announce this for a while, but if you don’t know, back in 2018, I was reached out to to speak at the United Nations back in 2018 about the abuse that autistic girls and women face. I was recently approached by AWN to write a piece for a new book, Sincerely Your Autistic Child! It’s an anthology of things that autistic individuals wish their parents knew or things that have helped them growing up with autism. Some authors also go into the different overlaps of autism with gender and sexuality, and autism and race, too.

I’m so glad to have been apart of this and I’m excited for this to come out. I know that I wrote about things that were important for me growing up that I wasn’t able to express to my parents clearly, and it’ll nice to be heard and to at least help provide a perspective to parents that they may not be getting.

You can preorder the book at the link above, but you can also find it on Amazon, Barnes and Noble, and Penguin Random House (this site has even more places to preorder). 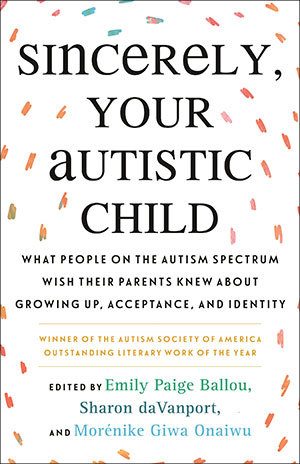 Just wanted to put a plug in for one of my new fav websites, Can I Play That?, which focuses on accessbility reviews of video games by disabled gamers. As someone with a dexterity/mobility disability in my hands (carpal tunnel) I NEED games that allow easy and convenient ways to push buttons to do stuff and let me rebind keys at will. I’m now checking Can I Play That? before buying games since their reviews are ++. They include accessibility reviews for deaf/hard of hearing and cognitive disabiliies too.

Reblog if you’re queer, have ADHD, or hate the government.

Nobody needs to know which one.

“And that quote, “The only disability in life is a bad attitude,” the reason that that’s bullshit is because it’s just not true.” - Stella Young

[IDs: Screenshots from the late, great, Stella Young’s TED Talk: I’m Not Your Inspiration, Thank You Very Much. Stella is a wheelchair-user sitting up on the stage in front of a massive crowd. In these screenshots, she’s saying, “No amount of smiling at a flight of stairs has ever made it turn into a ramp. Never. (Laughter. Applause.) Smiling at a television screen isn’t going to make closed captions appear for people. No amount of standing in the middle of a bookshop and radiating a positive attitude is going to turn all those books into braille.]

I use this speech and the underlying theories a lot in my PhD, but Stella Young honestly had one of those voices that needs to be heard by everyone, so I figured I’d post my favorite part of the speech here. If anyone remembers that time I threw myself onto the floor For The Vine, you’ll know that I also hate the quote: “The only disability in life is a bad attitude”. Stella just conveyed the message with less pain.

Link to Stella Young’s TED Talk | Link to the transcript 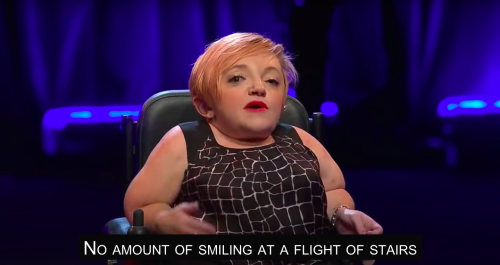 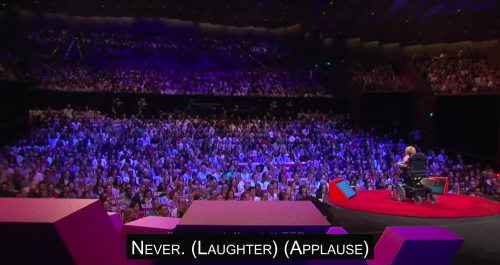 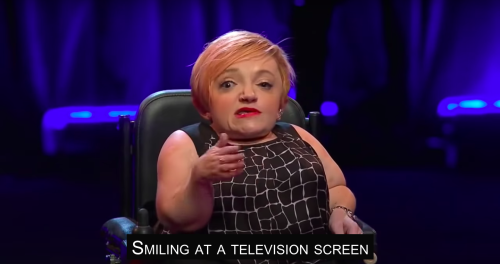 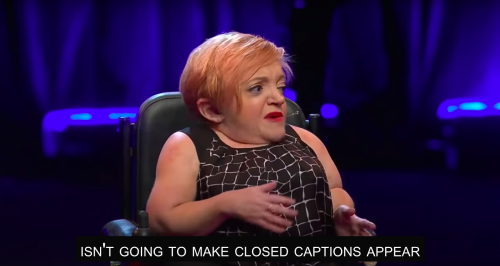 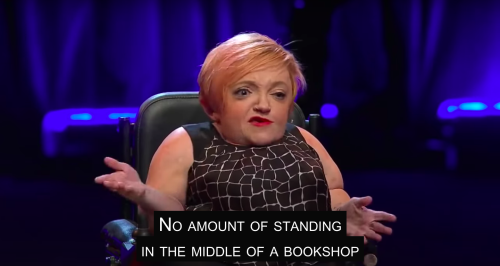 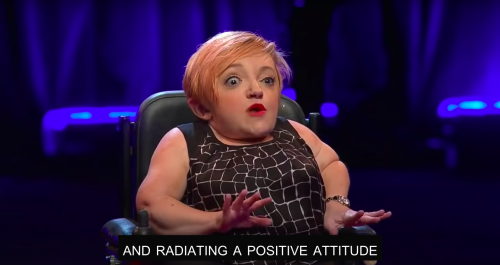 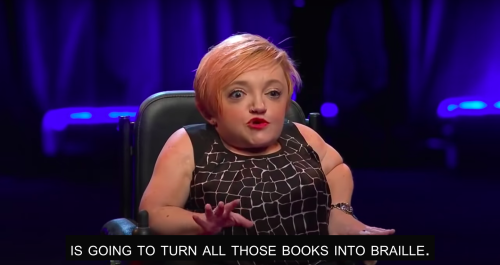 Let’s play a game.
Type the following words into your tags box, then post the first automatic tag that comes up.
you, also, what, when, why, how, look, because, never

Let me be clear, this a call out for all abled people and that includes ableist af physicians who would rather make you jump through hoops for months than listen to what you have to say about your own goddamned pain

To everyone with sensory issues:

You are not a baby for melting down because of under/overstimulation. You are not being immature or “just throwing a tantrum” when you have meltdowns. The discomfort and pain and fear you feel due to your sensory issues is real and valid, and shouldn’t be dismissed as silly or unimportant by people who don’t understand it.

Richard Poole from Death in Paradise is autistic.

Today I got sent two links to a couple of Autism research papers, one of which I took part in. I’m posting the links here if anyone is interested.

Study 1: Interviewing autistic adults: Adaptations to support recall in police, employment, and healthcare interviews (this is the one I was part of)

reblog this and in the tags, write the band that comes to mind first when you think back to being 13 years old

These are fun, so I made one! Tag your friends! Download to torment your loved ones! Print out and leave it in a toilet! idk, I’m not the boss of you