not actually about betta fish

i just really think they're neat. before you do literally anything read my about

We looked inside some of the posts by bettaxfish and here's what we found interesting.

I’d open with its a painting but it moves. (It’s enchanted to move?) Uh, sure. (Witchcraft!) I am stoned. Let’s try again. I’d open with its many paintings put together in succession so it has the appearance of movement. Demonstrate by drawing a simple page flip animation of a fish swimming in the margin of a book. Okay. So this buff cat. You see the cat’s head on the muscular man’s body? (Is this an Egyptian god?) Uh, no. It’s just like, we don’t have that shit anymore. I mean, so much time has passed, its pretty much fallen out of the cultural milieu here. (Existential crisis. I get him some tea. He spits it out cuz he thinks it’s disgusting.) ok buddy. So. You good to keep going? Okay so. It’s many paintings in quick succession so it appears to move, and you control its movement. Not the whole painting. Just the cat. He moves around on this landscape. The point of controlling the cat’s movement is like the point of a war game. Loosely. (So you practice war? Sharp nod. War.) Uh, okay. So then, when you get your little man to kill someone, that’s good, right. (What is he doing now?) Oh he’s dancing. You can make him do a little dance after he kills someone. (It’s inappropriate to do a little dance after you take a man’s life.) Okay but it’s not actually — (it’s INNAPROPRIATE. I spit on this). He spits at my laptop.

I feel like I’ve made this very clear on my blog but fuck the police. Fuck your cop daddy, fuck your cop uncle, fuck your cop sister, and fuck your cop characters. All cops are evil and participate in a system of violence and murder to protect white supremacy and wealth. There are no good cops.

Don’t talk to me about Brooklyn 99, I ain’t gonna hold your hand like a fucking child’s cut that shit out. Stop supporting propaganda because they fed you a gay character what the fuck is wrong with yall.

I see some of yall being like “I know cops are bad which means I can still watch b99 since I can tell it’s propaganda” but hoss that aint how it fucking works - the money from your views and all that goes to the show and to its production, so as long as yall watch it they will keep producing it and will be encouraged to produce other propaganda. Your edits, talking about the show, and whatever the fuck else youre doing for it also support the production and marketing of the show.

This goes for any media that supports evil.

edit: don’t tag this with shit like ‘oh but the show is funny and I’m still gonna watch it, haha [whoever the fuck] is a class traitor but I still love them’. Yall are bootlickers and fucking sick, real people suffer from this shit stop watching that show.

I’m at work, someone reblog with that shaking hands meme and having it be tumblr artists, writers, and gif makers. 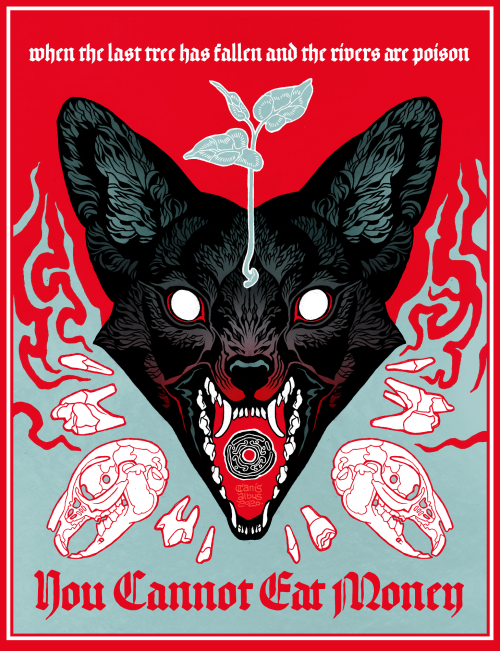 no matter how progressively you try to put it: implying that lesbians, gay men and bisexuals are incapable of feeling True Emotional Love That Goes Beyond Gender and Sex for their partners is just rephrased homophobia, lesbophobia and biphobia.

reblog to save a life

My cousin Sioban has her own practice now and she’s like, a respectable upstanding citizen and not at all a ball of creative garbage juice like me

Boosting for black women and girls who need therapy

Oh my god! This is a godsend!

that link doesn’t work. try this one: https://www.therapyforblackgirls.com/

This is so important!! 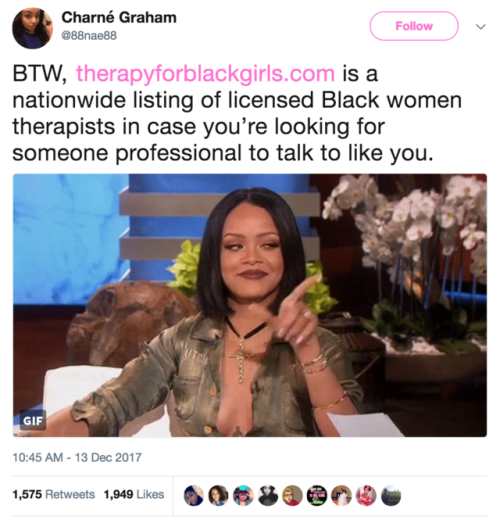 I think monks and druids are the funniest possibility for evil characters. Like you’ve achieved inner peace or harmony with nature but you’re just a fucking bastard about it

Here’s how you can help.

So over on Twitter, the white reaction to the recent lynchings and subsequent protests has moved from “I’m sorry” to “how can I help?”

This is because Black people got tired of white people filling their mentions with sorries and started saying a better response is to ask what you can do.

For the most part, it hasn’t been super productive. If a Black person says get involved with activism, there’s a wave of excited white people on social media imagining themselves as characters in Les Miserables, waving the metaphorical flag for justice but not really sacrificing anything.

I’ve spent a lot of time thinking about how Non-Black people can help in the last 48 hours, and it comes down to this:

Don’t reserve your outrage over racism for the big stuff ONLY. Of course the lynchings of Ahmaud Arbery and George Floyd are worthy of outrage. Yes, you should be speaking up. We hope that your expressed pain over witnessing it is genuine.

We don’t expect you to stay fighting, though. It’s not because we hate white people, it’s because that’s what the track record shows. Yes, some white people are committed antiracists. This isn’t about them.

When something monstrous like a lynching happens, it falls under the socially acceptable label of racism. For Black people, these events are traumatizing, but not because they are a surprise. Racism is not an event for us, it’s an everyday facet of existence. It’s the demonization of Black children by the good school/bad school dichotomy. It’s the empathy gap, where white people are sympathized with more than Black people. It’s your white boss asking when you’re going to move out of your “bad” neighborhood. It’s downplaying all of those things because it’s uncomfortable to think of smaller things as real racism.

How can you help? Think about the ways you contribute to white supremacy. It’s something I do as a Black person, especially as a biracial Black person. I’ve had antiblack/colorist thoughts, it’s part and parcel of living in a white supremacist society. I don’t believe any white person who says they haven’t. My family has been the victim of a public antiblack hate crime, and I still have to be intentional about confronting antiblackness internally. That’s how ingrained it is. Don’t tell me that you’re not racist as a white person when mixed and Black people have struggled with it themselves. Society tells us that Blackness is inferior over and over, every day. Don’t tell me you don’t struggle with it, because all that tells me is that you don’t think about it unless something happens that is so heinous you can’t look away.

Don’t reserve your outrage for the big stuff ONLY. When you clock out after the newscycle moves on to something else, it signals to us that you only consider things like lynchings actual racism.

Antiracism is an everyday thing. Very often it means calling out things that don’t kill people, but are harmful all the same. See, those “little” things make the big things possible. They’re connected.

If every white person was conscious of everyday racism and worked to eradicate it even when racism isn’t a trending topic, it would help. That would actually help. There’s no magic bullet to absolve you.

IF YOU’RE OUT AT THE RIOTS OR LOOTING REMEMBER TO BE SAFE AND TO COVER UP. HIDE ANYTHING THAT CAN IDENTIFY YOU. NO LOGOS OR FORM FITTING CLOTHING. HIDE TATTOOS AND PIERCINGS.

The protests in Minneapolis over George Floyd’s death reminded me that many people don’t know the basics to protecting yourself from police brutality during a demonstration. This post is focused on combating CS gas (tear gas)

WHEN PREPARING FOR A PROTEST:

[ID: graffiti on a brick wall reading: “MERCHANDISE CAN BE REPLACED. BLACK LIVES CAN NOT”]

Here is the link to the family’s gofundme!Donate and share!

the toronto police killed a black woman today at one hundred high park and there has been virtually no reporting on it. you can look at her brother’s instagram video here. her name was regis korchinski-paquet.

please don’t forget about breonna taylor in all this. just because her death wasn’t caught on camera and thoughtlessly circulated doesn’t mean that her story is less important. black women’s lives matter.

black lives matter more than ur account! spread awareness, make a difference, and educate yourself

also sugarbombing is selling stickers and pins that funds bail for people participating in the George Floyd protest!!

if you ignore what’s going on right now you are part of the problem. do not ask black people to educate you, since it is not their job. educate yourself and recognize your privelge

i just find it very hypocritical when people are like “is america okay???” when news of police brutality come to light. like, my dude. america is not the one exception in the world when it comes to police brutality. while in america the problem seems more obvious just cause everything there is basically overt and the ones in power seem to not care… that is the case in most other countries too, albeit less overtly so. if you think the police in your country isn’t racist, or classist, or otherwise bigoted, just like the police in the usa… you are not well informed enough.

to be very clear - this is NOT a defense of the united states of america nor is it a post coming from a butthurt usa resident who doesn’t like to have their country’s fails pointed out. i am not from the usa, which is why and how i know this is the reality in other countries. i know this is the case in my country and in neighboring ones too - you don’t have to be a sociologist to know the police force in most countries is simply a means of repression. it’s not only hypocritical to point fingers at countries that do exactly the same as your own, it’s disrespectful to all the minorities that are living and suffering in your country to act like only the boohoo meanies in north america and white europe are being violent. either you are naive and don’t know, in which case go educate yourself, or you are just in denial.

tldr stop pointing fingers at scapegoats outside, turn them inside your own communities, and do better and ask for better and demand better and fight for better in your own homeland

This is terrifying. This is the United States. This is on national live tv. I am speechless.