I don’t have photoshop on this computer 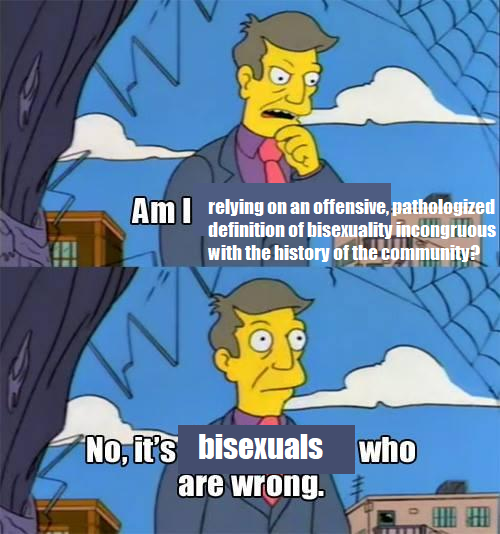 I’m tired of seeing posts like “bi women can’t use butch/femme because they can’t understand the fact that its a complex identity and expression of gender outside of aesthetics” for me, being butch isn’t just “I’m a masculine woman uwu” and its irritating seeing people assume bi women can’t see butch/femme as anything deeper than aesthetic. It feels more comfortable to say “I’m butch” rather than “i’m a woman” because that’s how i see myself. People act like bi women can’t possibly understand the butch/femme dynamic because we’re inherently “heteronormative.” They act like we can’t have complicated relationships to gender and being a woman because we “perform for men.” They erase our part in butch/femme history because they look at us as being traitors to the sapphic community. Being butch is the only thing that makes me feel good about being a woman. The way i interact with people is different when i’m identifying as butch. The way I interact with WOMEN is different when I identify as butch. I feel more confident and comfortable, i don’t HAVE to perform femininity and i know that there are people who will be attracted to me for being butch. They love my body hair, my strong hands, my muscular arms, my short hair, my unwillingness to submit to men, etc. Growing up I felt “ugly” because all these traits are seen as unattractive but calling myself butch now feels like coming home, in a place where i’m allowed to be those things. Its a big “fuck off” to everyone who tells me how i should present my gender. Its a “fuck off” to men who think that because i’m attracted to them, i’m supposed to perform for them. Its who i am at my core, its putting my needs at the back burner for any woman, putting my safety on the line to protect people i love. Its embracing my strength and masculinity, knowing its okay to be butch. Any man who wants to be with me has to wholeheartedly accept that being butch is who i am, that i won’t water down my expression to make them more comfortable. I will reclaim my history and you cannot stop me from coming back home to my roots.

Once Again time for a reminder that bi women have been iding as butch and femme since the creation of these terms and the only reason people think these terms are “lesbian exclusive” are:

some idiot tried countering this by saying butches and femmes dont “cater to men”… yeah they dont!! if you think bi women “cater to men” then GUESS WHAT… youre a biphobe!

to clarify bc i just put it in the tags on the op:

butch and femme culture started in the 1950s and the term bisexual became a popular identifier in the community in the 1970s. the term bisexual was actually coined in the 1850s but for over a century was used in a psychological context (along with terms like “homosexual” and “transsexual”) to pathologize lgbt ppl, and wasnt widely reclaimed as an identifier until the 1970s.

honestly the language of describing bi women as ‘sexually available to men’ is super disgusting and i think most people agree on this, but i would take it a step further and say people shouldn’t say straight women are ‘sexually available to men’ either. the idea that by virtue of being attracted to men, any woman is inherently ‘available’ to them seems to reinforce some pretty garbage myths about consent and ownership

i’ve said it once and i’ll say it again but bi culture really is noticing the bi flag colours in everything u look at…….

the fact that even bi ppl don’t know their own history is honestly really scary to me, and the fact that ppl who aren’t bi will literally redefine what bi means and straight up erase our history to fit their biphobic narrative and some ppl just eat it up n see no problem with it is terrifying!!! but when u speak up against it and suggest ppl read up on bisexual history ur somehow like. lgbtphobic and ppl will just be biphobic w no shame at all n it just.. shows a lot imo

@ everyone in the notes crying about bi people calling ourselves gay and nonbinary people existing: Die mad about it

“bi means gender is a factor in your attraction, pan means you don’t have a preference” is just the same fucking ancient biphobic shit of trying to figure out if a bisexual person prefers men or women so that you can decide if they’re really gay or straight

I repeat: the definition of bisexual as “attraction regardless of gender” is at least 33 years old.

Wait I’ve done this, sorry. What’s the difference then?

I actually do need to learn more about this can someone please explain (and yes, I have done this unknowingly)

Bisexuality has been the primary term used for people attracted to others regardless of gender for the last century and a half or so. Medically that was generally meant to refer to people attracted to “males and females” (bisexuals themselves being considered part male, part female), but obviously in the 90s the idea of gender being inherently separate from sex became a more prominent concept in our culture, in particular LGBT culture which often means we now talk about attraction to gender over sex (though both gender and sex characteristics tend to be a factor in human attraction). 20th century bisexuals didn’t have a concept of excluding any genders.

Pansexuality has a complex history. Sometimes it was just a preference for the prefix, other times it was about BDSM play, and other times it was about attraction to trans and intersex people. Depending on who you ask today, the definition will vary from “an attraction to trans people that gays, lesbians, and bisexuals don’t have” to “an attraction to a person’s personality over their body, which gays, lesbians and bisexuals don’t have” to “just another word for bi”. Sometimes bisexuality is seen as an umbrella term, but pansexual separatists strongly disagree with this, and tend to insist there are qualities of pansexuality which bisexuals are not capable of, though it isn’t always clear (or consistent) as to what that is.

Tumblr discourse generally tends to focus on the trans aspect. The most common idea nowadays is that a bisexual is incapable of being attracted to a nonbinary person, despite the fact that many nonbinary people (including nonbinary bisexuals) disagree with this.

So it’s all pretty vague lol. Maybe it’s better vague. Bisexuality has always been vague, and that’s what people don’t like about it.

To quote some old bisexuals:

J: Are we ever going to be able to define what bisexuality is?
S: Never completely.

ppl on here make a post like “bi culture is HATING men and hating ur attraction to men! 🤢🤢🤮 liking m-🤢🤢 liking men🤮” and think it’s the epitome of bi positivity. bi men dont exist anymore? y’all are comfortable being biphobic like this? and for what? to appeal to biphobes who want us to downplay our attraction to the opposite gender to be “valid” in this community..? bi men i am so sorry

ok adding onto this, does nobody see how biphobic and homophobic this is like… making posts claiming that hating ur attraction to men is a universal bi experience as if bisexual men don’t exist? like u realize bi men are already told their attraction to men is predatory or dirty or sinful and y’all are perpetuating these ideas in our own communities? and no one sees the problem with that? and @ the bi women who make these posts (obviously it’s not only women, but the majority of the ppl who make these posts r bi women) it’s not a universal experience, it’s internalized biphobia. it’s us being taught that we’re only valid or acceptable IF we downplay our attraction to men. it’s us being told we aren’t “queer enough” and don’t belong in lgbt spaces. you’re not only harming yourself, you’re harming your bi brothers.

regarding this post, i would like to add i have absolutely no problem with women who talk about hating men or their bad experiences with men and that’s not what this post is about in the slightest. my post is about bi women who frame bisexuality as like, being ashamed abt ur attraction to men and act like it’s some universal experience that is #relatable for all bi ppl when in reality, it’s not. it’s ur internalized biphobia n societal pressure (often from other el gee bee tees which is.. disappointing to say the least) to conceal parts of ur bisexuality tht aren’t desired or else ur somehow betraying ur own community n invading lgbt spaces. and it’s really fucking damaging to bi men who already have to deal with homophobia bc of their attraction to men! stop allowing biphobia in our communities n stop trying to appeal to biphobes! they don’t care about us! 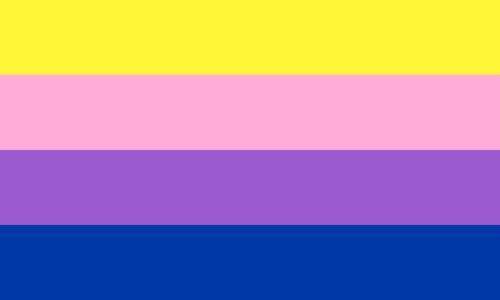 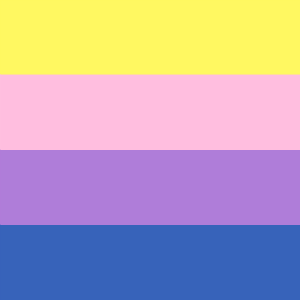 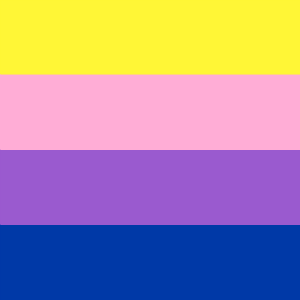 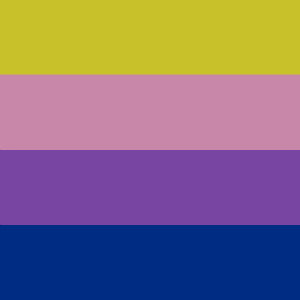 The very first bisexual conference in the UK was in 1983, and called “The Politics of Bisexuality”. BiCon has been running for 36 years now.

Just wanted to mention this, because bisexuality tends to be seen as apolitical (due to horniness no doubt).

The fixation on trying to find a way to use the word “two” in the definition of bisexual is misguided, especially as the bi activists who paved the way for the community were never fixated on the “two” prefix.

It’s also time to stop fixating on the idea that “regardless” means “I don’t see gender” and realise that it’s just a way of saying “gender doesn’t stop me being attracted to them”.

J: Are we ever going to be able to define what bisexuality is?
S: Never completely. That’s just it – the variety of lifestyles that we see between us defies definition.

I am bisexual because I am drawn to particular people regardless of gender. It doesn’t make me wishy-washy, confused, untrustworthy, or more sexually liberated. It makes me a bisexual.

”The Bisexual Community: Are We Visible Yet?”, The 1987 March On Washington for Lesbian and Gay Rights, 1987

The bisexual community should be a place where lines are erased. Bisexuality dismisses, disproves, and defies dichotomies. It connotes a loss of rigidity and absolutes. It is an inclusive term. 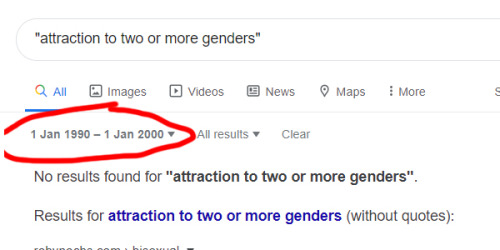 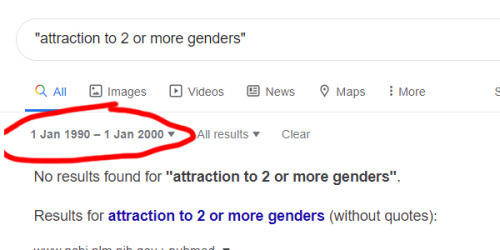 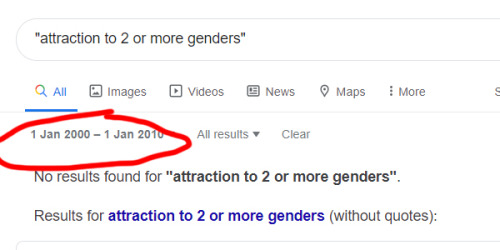 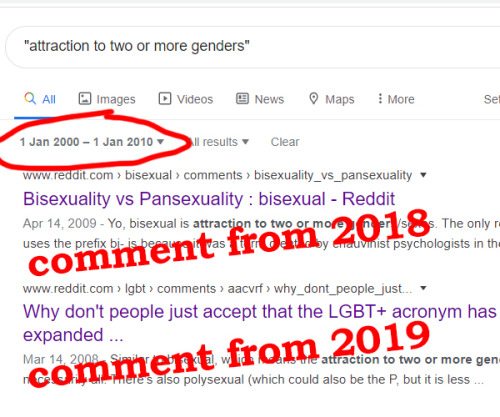 You truly can talk about intracommunity lgbt problems without being biphobic (: