We looked inside some of the posts by copiouskobolds and here's what we found interesting.

A note about tails.

And it grows down and out in a curve, not at a right angle with the spine! Looking at you, Hero Forge. 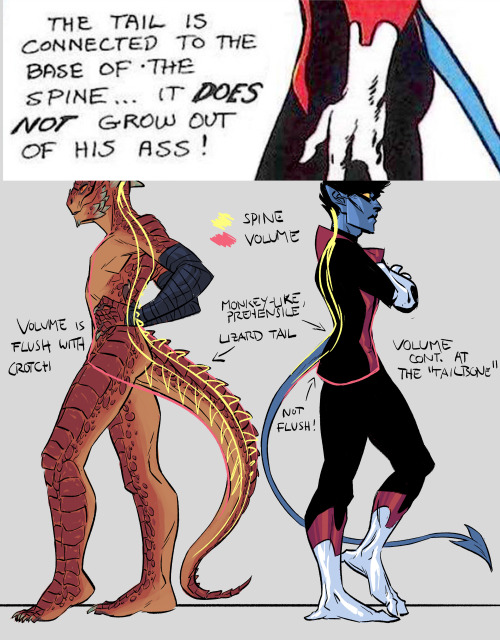 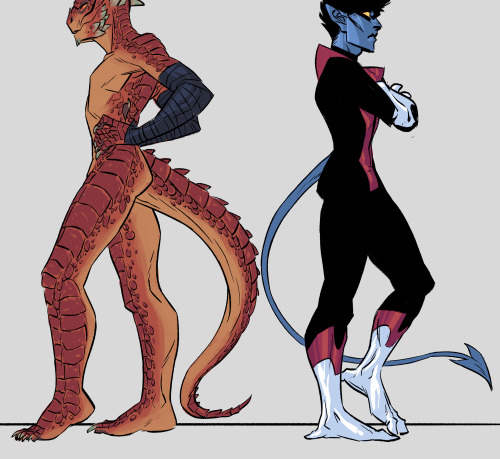 a courageous kobold for @copiouskobolds !

I didn’t expect you to adhere that closely to the reference. Well done! I like the pattern on the cloak.

Also she looks like she belongs in the show Gargoyles and I am all about that aesthetic. 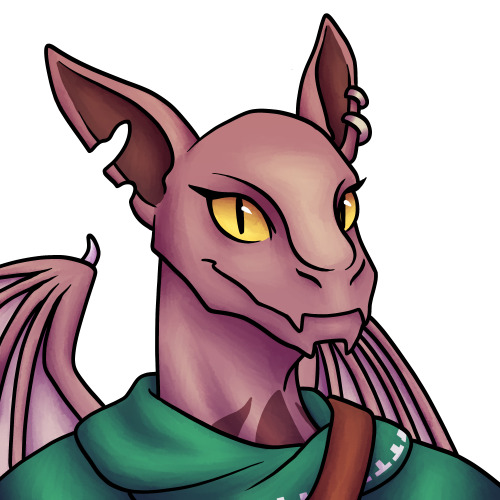 a courageous kobold for @copiouskobolds !

I didn’t expect you to adhere that closely to the reference. Well done! I like the pattern on the cloak.

Jasper the kobold used to have wings before her dragon-hating tribe cut them off. Maybe you could do one with the wings still on?

[ID: Digital illustration of a red dragon surrounded by their colorful hoard of books. A worn, blue scarf wraps around their neck, and a pair of gold glasses sits on their snout, held in place by a gold chain. The dragon’s lair resembles a huge, airy library with multiple levels of bookcases, tall mountains of books, and floor-to-ceiling windows revealing open sky. Decorative gold chains drape across the space. The dragon smiles as it holds a small book in its mouth, stretching to offer it to a distant human standing atop a book tower. End ID.]

Hi everyone! You can now pick up a print of this piece here in my shop 🐉💛

Thank you to everyone for the new love towards this piece!! Reminder that you can grab a poster size print of it here if you’d like it on your wall 😊

Great art! Got mine framed!

Some halloween decorations I made a couple years ago, actually uploaded as the right post type this time. Screw you, mobile app.

The first are some gravestones. The paint came out perfect, but at this point they’ve been repaired so many times I may as well remake them in plywood.

The second is a wreath made of honey locust thorns and hand-painted eyeballs. 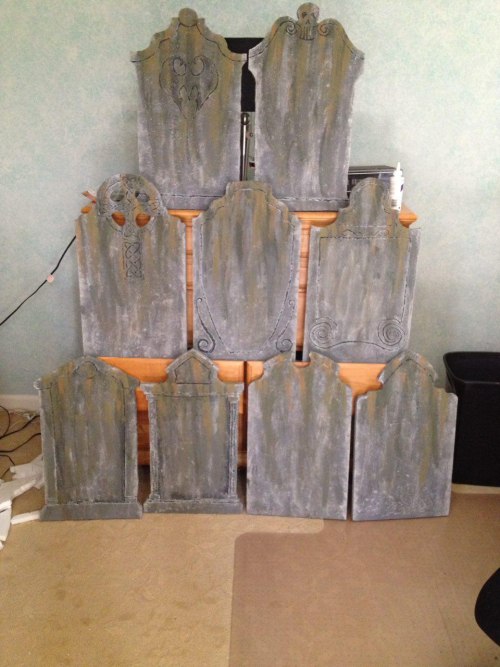 A long time ago, my mother’s old workplace did a Harry Potter themed dinner event. As the decorators, we made lots of props and decorations, including fake inkwells for every table, Stacks of books from old VHS boxes, House banners, Dolores Umbridge’s educational decrees–and these 9 wands, the only thing from the event I kept for myself.

And the animation is so good!

Weird, tumblr keeps giving me notifications that you've made a post, but the most recent one seems to be back from the 2nd of October.

I was making a second blog for reblogging D&D battlemaps, and kept accidentally reblogging with the main account instead of the secondary.

Then I found out someone else had already done what I was doing, so I just scrapped it.

If any of you use Wallpaper Engine, I made some spooky ghosts for you.

A dramatization of yesterday’s D&D session.

Our cleric, a bronze dragonborn named Kriv Yajerit, has sworn vengeance against the cult of Tiamat for destroying his temple.

Then yesterday, we found a sentient sword.

A cursed sentient sword that vowed vengeance against one random dude we don’t know, gives the wielder disadvantage on all attacks with any other weapon besides itself, and drives the user toward this vegneance even if they’re dead.

Guess which dumbass cleric made a vow of mutually assisted vengeance with said cursed sword.

When you look back on memories of games you’ve played versus games you’ve watched let’s plays of, is there a difference?

There isn’t for me, but that might be because I primarily see myself as an artist and not a gamer.

Grabbed a bone dragon from Micheal’s while collecting more glitter! And it just so happens that a d20 fits perfectly in his mouth so meet my new model Tibs!

I saw your post and had to go out and get one myself.

What’s a weird area of the world that you think would be cool to see in your D&D Games, let us know in the comments and re-blogs!

The Fighter is a lot more interesting than people give them credit for. One of their most interesting features is their fighting style, which is like a feat you get for free at level 1.

Obviously, though, some styles are better than others. Here are my thoughts on each:

Archery:
- The Mario of fighting styles. Good in every situation, excellent in none of them. You’ll never not welcome a +2 to ranged attacks.

Close Quarters Shooter (UA):
- Either useless or godly, depending on whether or not your DM bothers to employ cover mechanics and weapon switching time. The overall +1 to ranged attacks is nice, though.

Defense:
- Eh, a +1 to AC is fine if you’re minmaxing tankiness.

Dueling:
- Another Mario, but for melee. Interestingly, it seems to be worded to work with shields.

Great weapon fighting:
- The chances of rolling a 1 or 2 on a damage die is very high, so this is a pretty damn good bonus to your overall output, especially since the lowest die you’ll ever roll with this ability is a D8 or 2d4.

Protection:
- Godlike, as long as you can convince your enemy to attack the guy you’re protecting instead of you. Since you can literally defend someone from BEHIND them, that’s not hard to accomplish.

Tunnel Fighter (UA):
- “You cannot comprehend the power of my opportunity attacks. …Why aren’t you moving?”

Two-weapon fighting:
- Yet another Mario. Basic but useful bonus to damage.

Blind Fighting (UA):
- The wording is confusing, but basically this comes into play when you are blind or in darkness, but your enemy hasn’t specifically made a stealth roll to hide from you.
- Obviously this style is more useful if you don’t have darkvision.
- This is your chance to make that blind character you’ve been thinking about.

Interception (UA):
- A less powerful protection fighter that doesn’t require a shield. Nice!
- If you’ve got a shield, just pick protection instead.
- It should be noted that literally all weapons are either simple or martial. The only “weapon” that doesn’t trigger this ability is improvised weapons

Thrown weapon fighting (UA):
- Weirdly, the way this is worded, you don’t have to throw your weapon to make use of this bonus. You can instead draw your weapon and make a melee attack with it, samurai-style. Again, kind of useless if your DM doesn’t bother with weapon switching time.

Here are all three levels of icons I made for those D&D-themed playing cards I posted a while back, and a glimpse at my icon-making process.

Basically, I start with very small pixel art. This ensures that my icons are readable even at very small sizes, and that I don’t over-detail them. After that, I enlarge the pixel art 1 or 2 times,smooth the curves, and sharpen the points; and finally I trace over the pixel art with a much higher resolution file or a vector program.

For these pieces, I needed a messy, hand-drawn style, but I’m capable of clean logos as well.

I also made a set of figure bases/tokens with these icons, which can be found on thingiverse: https://www.thingiverse.com/thing:4558815 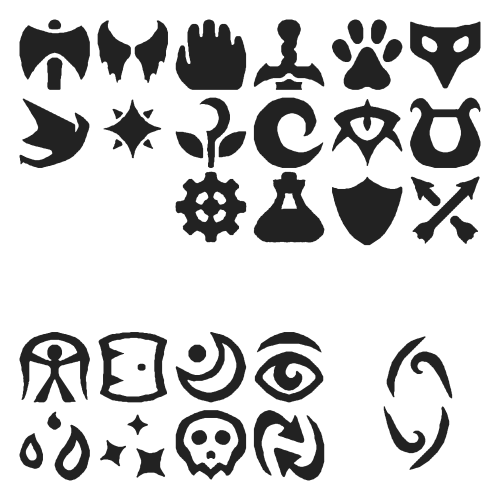 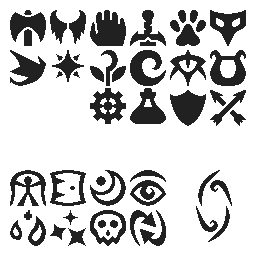 Wringtail Wriley, a kobold outlaw arcane archer I plan on playing in my next campaign. Her tail got wrung in an “accident” involving some poachers. 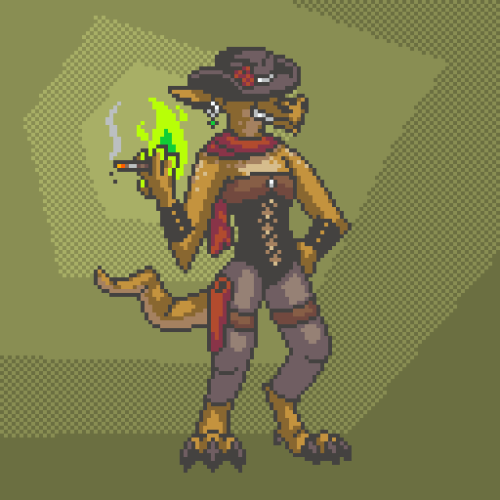 During Thursday’s D&D session. I got a sentient rope that acts like a dog. He’s a good boy.

Yes, he is playing with a ball of his own flesh. 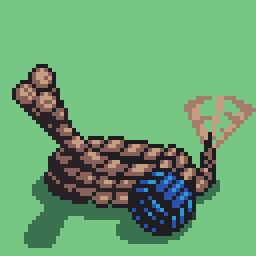