Welcome to Daily Spider-Man, your source for everything relating to all Spider-verse characters, your friendly neighborhood Spider-Man and his alter ego, Peter Parker! We try our best to check all spider-man related tags, but if you want us to reblog, tag us at #dailyspiderman.

We looked inside some of the posts by dailyspiderman and here's what we found interesting.

Yeah, but those are the best kind.

Kid, where’d you come from? — Field trip to MoMA.

[ID: Six gifs of Spider-Man. The first is from the Spider-Man PS4 game. It’s a close-up of Peter in a blue flannel t-shirt sitting in a diner booth. He’s speaking with passion and sincerity, and he gives a crooked and wondrous smile after. The caption reads: “Dr. Octavius’ work will help millions. I’m- I’m right where I want to be. Right where I should be!”

The second gif is from The Amazing Spider-Man (2012). It’s a wide-shot of Peter in the spider suit walking down an alley. Accompanying him is a young boy wearing a backpack. Peter is looking down at him and reaches out to nudge his shoulder in a comforting and friendly way.

The third gif is once again the PS4 game. It’s a close-up of Peter in the suit. He’s looking up at and talking to a screen. He’s got his head tilted slighting and is squinting his eyes. As he talks he turns his head slightly, revealing the white lenses of his mask as he widens his eyes. The caption reads: “[Fisk: After all these years, you’re still just an ignorant child….] Peter: True, but that’s part of my charm, isn’t it?”

The fourth gif is from Into The Spider-Verse. It shows Peter sitting at a diner booth with Miles across from him. He’s wearing a ratty green canvas jacket over his suit—sans gloves and mask—and in front of him is a tray of fast food fries, accompanying the drink in his hand. A waiter in the corner of the frame sets down a check which Peter’s eyes land on. He gazes at if for a moment before turning his look pointedly to Miles.

The fifth gif is a medium profile shot of Peter and Gwen Stacy talking. Peter stands against a wall and gestures out with his hand as he talks emphatically. The caption reads: “What if something happens to you just like it happened to him because of me? […] I cannot let that happen.”

The sixth and final gif is from the Spider-Man PS4 game. It is a wide shot of a New York city streer. Peter swings through the air, spinning as he shoots a new web off in front of him. He hangs in the air for a beat as his arc through the air comes to an end and he he lands on a passing freight truck, running along the top. END ID]

It’s too cold to change out here. 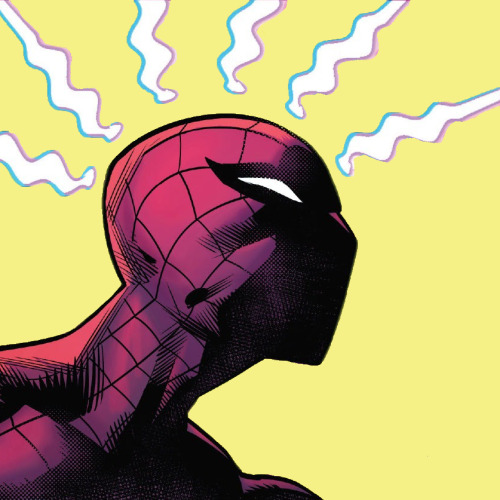 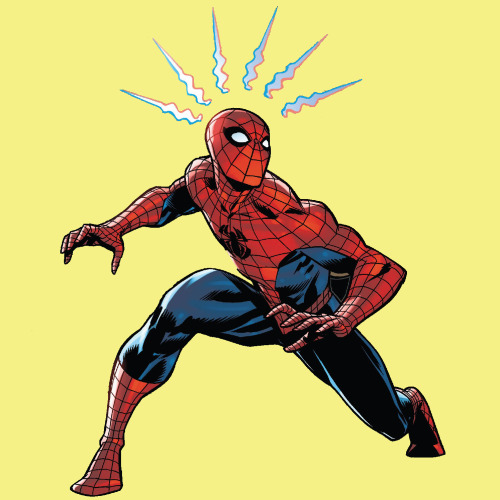 “How could you do all of this?”

get to know me: [3/15] animated movies ✮ spider-man: into the spider-verse

And when I feel alone, like no one understands what I’m going through, I remember my friends who get it. I never thought I’d be able to do any of this stuff. But I can. Anyone can wear the mask.