Naptime of the Gods

There's such a fine line between fascination and obsession. DK • they/them • AO3: justdk

We looked inside some of the posts by dkafterdark and here's what we found interesting.

hi guys! so given what’s been happening around the country this week, I’ve been trying to figure out what i can do, at least in some tiny part. i’ve set up a redbubble account for my art, and 100% of all profits will be going to North Star Health Collective, which is focusing on providing medical aid for protestors. 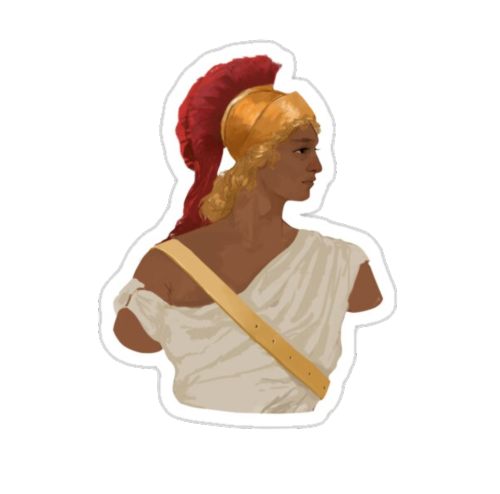 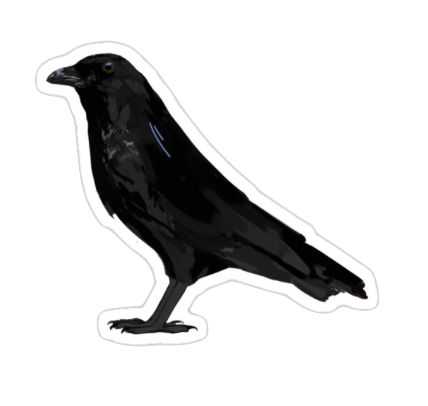 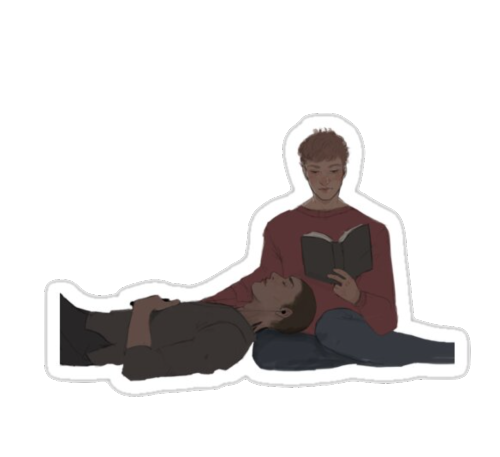 pride month starts tomorrow, but don’t let that distract from continuing to protest and donate in support of black lives matter. here are some black lgbt funds to donate to if you are able:

also, i know many pride events have been cancelled due to covid-19, but if you are going in public to protest or to another event, please be careful and wear a mask. covid is still going on through all this

Hello! I’ve added a few new washi tapes to my webstore, and restocked my haikyuu enamel pins. I’m running behind on the other new products I had planned, but will try to pop them up soon.

50% of all my store earnings this week, and 25% for the rest of the month of June 2020, will be going to a mix of community bail funds (USA) and indigenous services (Australia), including:

for those who enjoy my work – thank you as always for your support. my voice is not the right one to amplify right now, but i’m giving where i can, and i hope you will too. acab. please stay safe 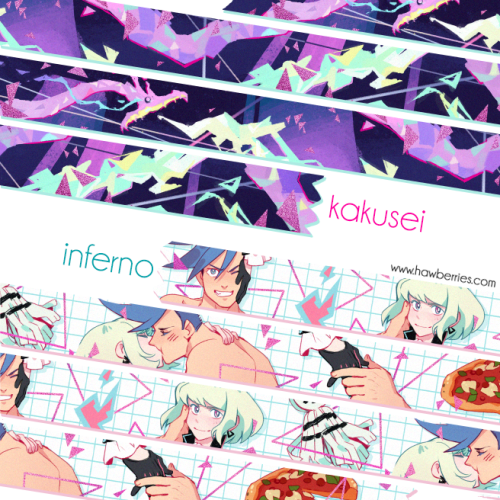 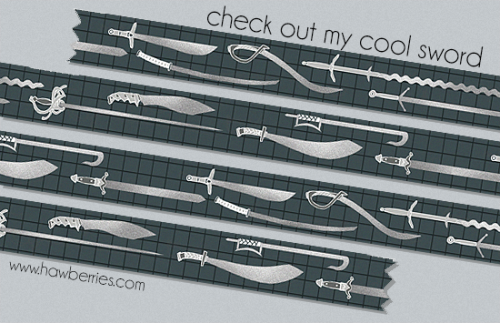 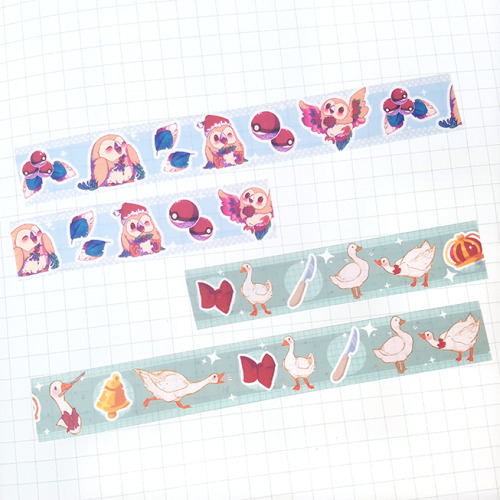 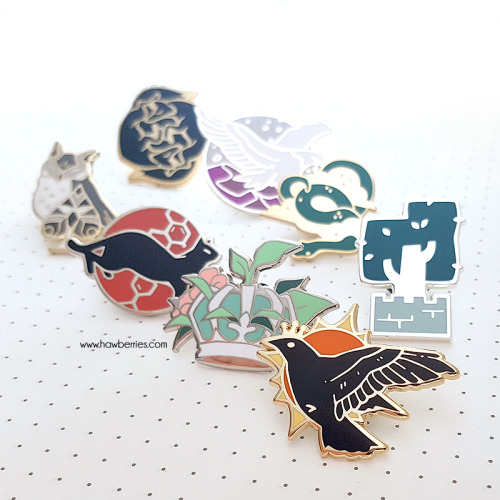 Miniatures have always both fascinated and intimidated me. And then I saw this kit. A library. Come on. This was meant for me. Because I immediately saw the opportunity to customize it, to make it truly mine. With the books that I love.

So I present to you my first ever miniature room!

I used the Sam’s Study kit from Robotime, and I personalized it heavily. I hated the look of their books, they were bland. So was their artwork for the picture frames. There is exactly 3 pieces of paper from their kit in my design :P I also painted the furniture, upholstered the chair with an old piece of jeans instead of their cheap red fabric, and used spare fabric for the coffee table and the box. I changed the wallpaper, the flooring, and I added a coffee cup.

The cover scanning, Photoshop and image search alone took me around 40 hours. I loved every minute of it, haha! The assembly and painting took another 35 hours.

All the books made into miniatures are meaningful to me, all the artwork as well.

For the shelves, many titles are ones I own a copy of, but many are also filler because they’re pretty, and because most of the books I buy are in ebook format. And finding images of book spines online IS HARD. There are books I would’ve wanted to feature, but just couldn’t find a picture of the spine since they are not that mainstream. As I was listing these books, I had to refrain from also adding (OMG you have to read this!!) and I want to reread them all. Like right now.

Here follows a list of all the books I featured in this project, as well as all the artwork. If you see something I forgot in crediting the artists, something I got wrong, please let me know.

All the titles I made into miniature books (49 total!)

ARTWORK (in no order)

All the books on the shelves (from left to right , top to bottom) 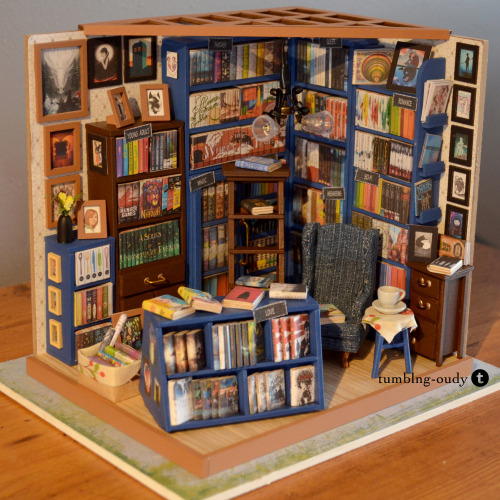 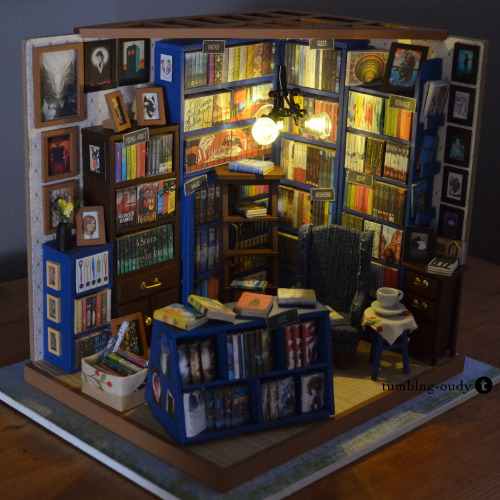 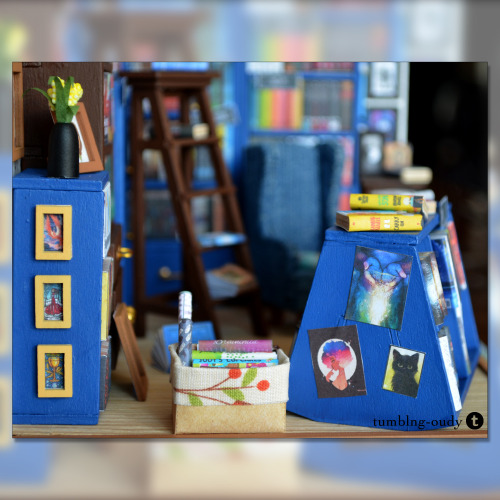 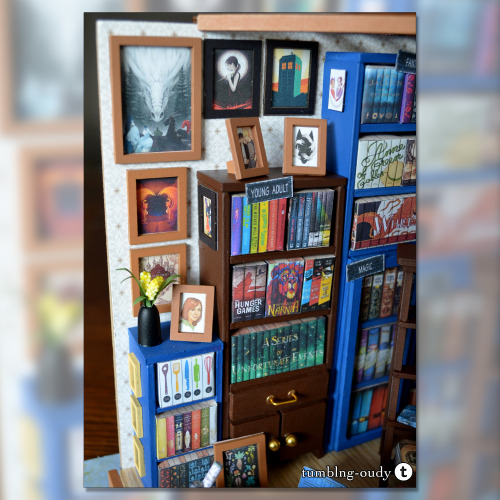 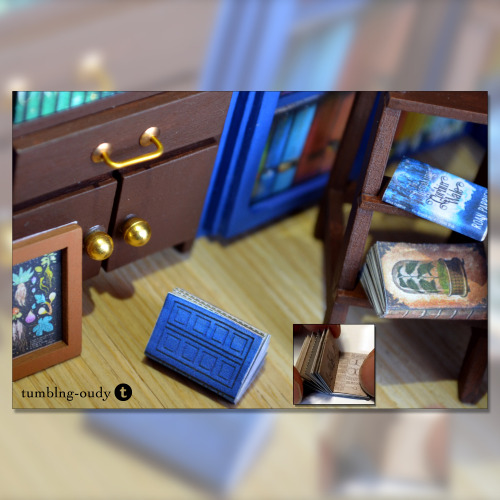 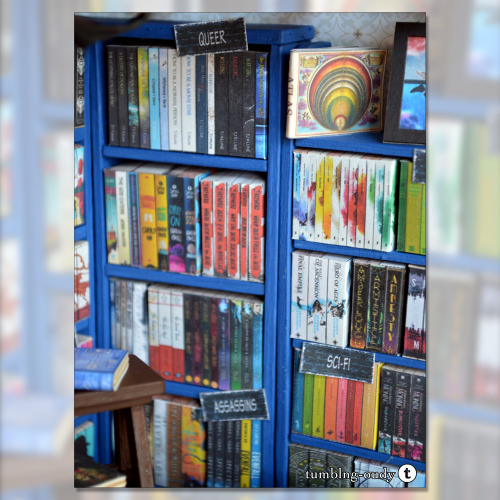 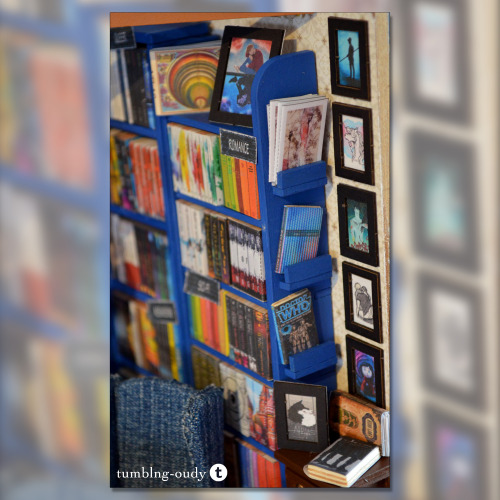 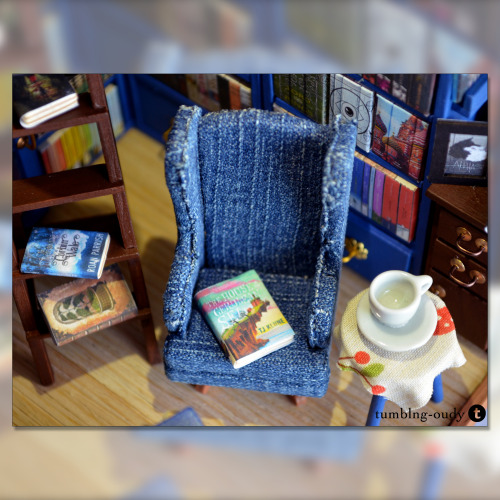 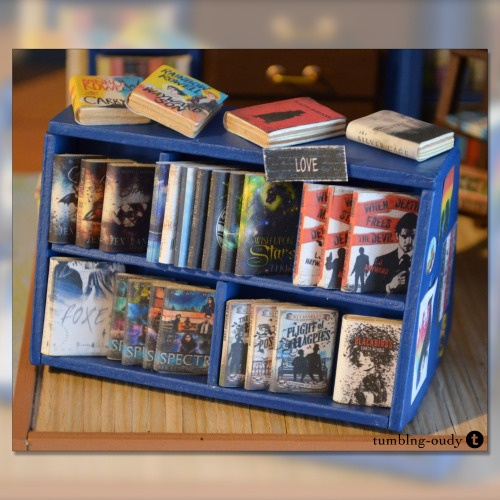 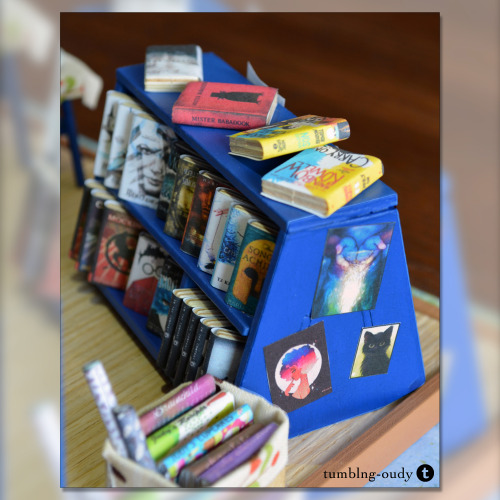 “i’ve been dead for seven years.”

Listen okay I know ships are great and all but there is nothing as good as getting to see a group of disasters slowly become a family even if they don’t realize it and then someone’s in danger and suddenly everyone’s like….don’t you fucking touch my family and there’s a moment of realization that they’d all die for each other in a heartbeat and that will always be better than any ship could ever hope to be

I love this tiny disaster child.

NEVER TURN THE ZOOM OFF.

NOT EVEN IN BED

Donate $10 or more to the George Floyd Memorial Fund your local Freedom Fund or BLM relief fund of your choice of relevant charity or fund and I will write you something (1k words for every $10).

Please include a screenshot/receipt of your donation with the time stamp included (Donation must be dated on or after 05/25/2020) and your prompt request.

If you want to know what I will/won’t write, please reach out or refer to this post: https://flowerparrish.tumblr.com/post/612950072434589696/due-to-the-state-of-the-world-presently-im 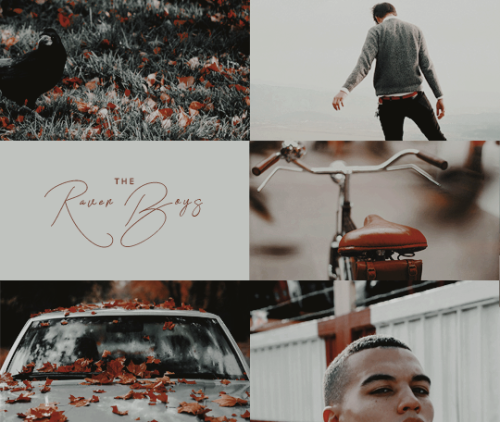 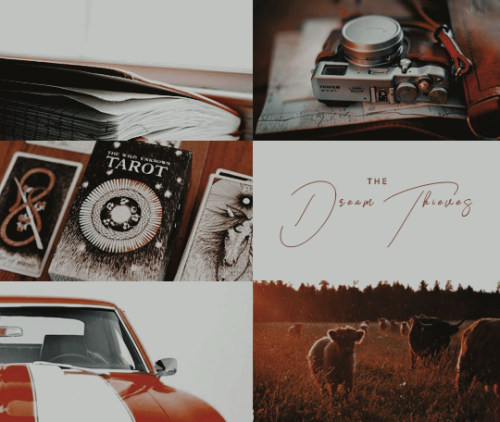 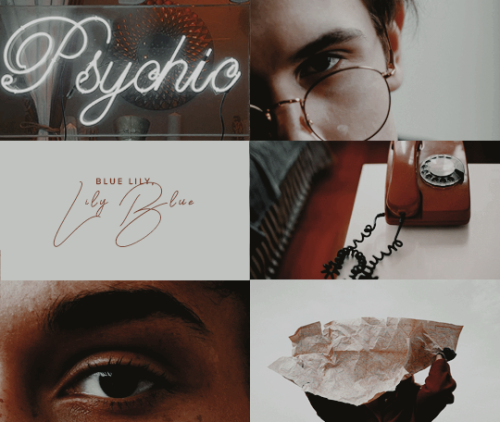 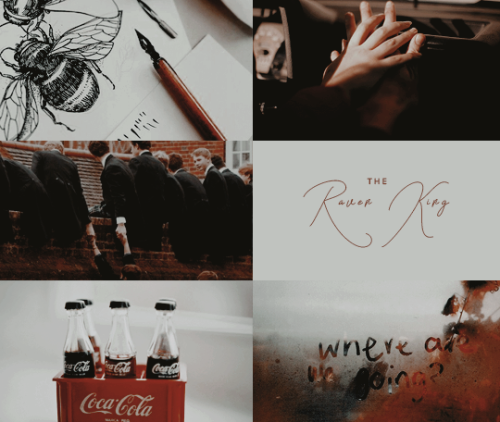 Hey y'all! I was able to get my top surgery in March so now I’m looking for a home for my old binders. I bought them from gc2b and both binders are size Small. FYI I wore the non-rainbow binder almost every day for over two years so it’s a bit stretched out and discolored. I only wore the rainbow binder a few times so it’s nearly like new! If you want one or both binders send me a non-anonymous ask or message. I can pay shipping unless it’s international (outside the US)

feel free to reblog this!

#binder, #binder giveaway, #trans, #transgender, #nonbinary, #gc2b binder, #gc2b
10 notes · See All
dkafterdark·12 hours agoAnswer
ohhh i love your writing!!! could you maybe do “You’re trembling.” for the dialogue prompts?? You obviously don't have to if you don't want to :)))

Thank you!!! I hope you enjoy!! I hope Jerejean is okay.

To put it mildly, Jean was not accustomed to being touched gently. The last gentle hand he remembers is his mother’s, touching his face as she sent him away. He has long since forgotten the words she spoke, and even her face is cloudy to him now, but the memory of the touch of her hand on his cheek was a balm for the eleven years he spent at Evermore.

He feared he would never be touched gently again, until Renee came for him with soothing words and hands cradling his face. He flinched away from her, but she didn’t judge him for it, only held him fiercely and pulled him out like an avenging angel.

Jean does not flinch for Jeremy Knox, or any of the Trojans. He treats their handshakes like acts of violence and answers in kind. To Jean, the Trojan Court is a battlefield, and Jean, raised for war, sees the other players as landmines to be avoided.

Jeremy, on the other hand, is naturally tactile. Jean sees how he seeks out his friends’ touch, leans into it like a flower tilts up toward the sun and Jean cannot fathom what it must be like to trust someone enough for that.

It takes time, but he and Jeremy eventually form a genuine friendship. Still, he sees how careful Jeremy is to respect his boundaries and while it’s kind, he won’t let Jeremy deny himself what he needs because of Jean. He trusts Jeremy with this .

“I am not a spooked animal,” he says, watching Jeremy perch himself on Jean’s bed.

Jeremy twists his hands nervously. “I know. I just don’t want to make you uncomfortable.”

Jean puts his book away and moves closer to him, pressing their knees together. “I will not always be okay with this. But I can try. I can get better. This is good.”

Jeremy was not a stranger to physical affection. He had grown up in a family of huggers and while he would never cross someone’s boundaries, he’s the first to offer a literal shoulder to cry on or a hug of congratulations.

That said, his fear of touching Jean wasn’t entirely based on concern for Jean. Jeremy in a romantic context became more guarded in his touch. He craved it, but he’d been in bad relationship before, been told he was needy and clingy, so it’s just easier to stay away, to put off the hurt.

But when Jean holds him the first time and traces his hand over his face like he’s something to be cherished, something inside Jeremy breaks.

He doesn’t realize it until Jean tilts Jeremy’s head up, frowning. “You’re trembling.”

Jeremy shakes his head and brings Jean’s hand to his chest. “I’m fine, I promise. Just don’t go away, please.”

Jean nods, but he still has that adorable furrow in his brow that Jeremy wants to smooth away with his thumb, his lips, anything. “I won’t, Jere. But I need you to talk to me.”

“I just never thought it would feel like this.”

Jean smiles. “Like what?” he asks, lifting Jeremy’s hand to kiss it.

Jeremy lets out a sigh. “Like that. Safe. Good. Special.”

Jeremy surges forward and kisses him soundly. “Thank you.”

Jean shakes his head. “I love you. I need no thanks for that.”

They fall asleep, together, and happy, and so, so loved.

#my heart is so full, #jerejean, #jeremy knox, #jean moreau, #the foxhole court, #all for the game, #tfc, #aftg
95 notes · See All
dkafterdark·12 hours agoVideo

Greatest thing that happened so far in 2020.

#lotr, #lord of the rings, #reunited apart, #i'm still recovering, #it was so perfect
94 notes · See All
dkafterdark·12 hours agoText

AND THAT, GOLLUM IS!!

If you need some hope and laughs and happy tears, consider giving this a watch!

When I read it upside down, it says GUCCI. 🧝‍♂️💰

the face of an emotionally compromised LOTR fan after the FABULOUS Reunited Apart live show. I laughed, I cried, I shrieked and flailed. Thanks @glitterghost for inviting me to this phenomenal experience 💛

radio silence by alice oseman: i wonder — if nobody is listening to my voice, am i making any sound at all? 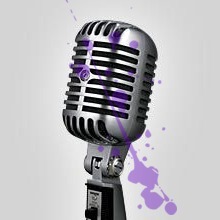 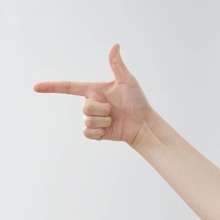 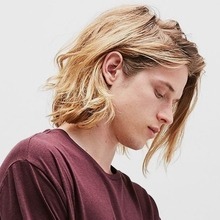 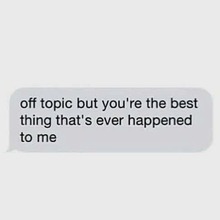 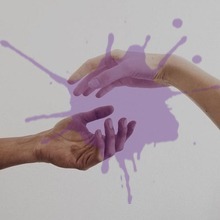 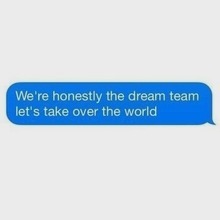 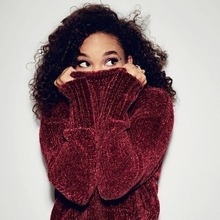 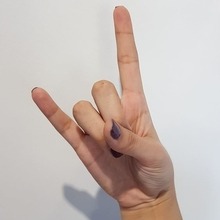 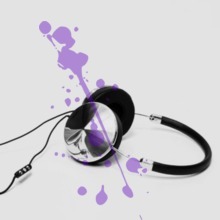