dragonkings444
Stories & Chapter Request and Suggestion
Explore Tagged Posts
Trending Blogs
Statistics
We looked inside some of the posts by dragonkings444 and here's what we found interesting.
Inside last 20 posts
Time between posts
11220.1
Number of posts by type
Photo
3
Video
0
Audio
0
Text
9
Chat
0
Answer
8
Link
0
Quote
0
Fun Fact
If you dial 1-866-584-6757, you can leave an audio post for your followers.
dragonkings444 · 56 minutes ago
Answer

I asked this to gorillageek but like the other 0revious questions Im curious. Sleeping with Jaune a very sleepy Nora is hungry after such a intimate night with her blonde boyfriend. Upon seeing his naked butt she mistakes it for psncakes and violently bites it

Nora: Because I am hungry that why!

Growing up with your starters

The captions are also really cute, although they mostly describe what’s in each photo:

Bulbasaur: Somehow, nomming on my clothes… has become a weird habit of theirs.

Charmander: It’s my first attempt, but I made a plushie so that he wouldn’t get lonely.

Charizard: That plushie seems to be his favorite even now.

Squirtle: Squirtle’s a bit timid and hides behind me at the smallest things.

They just posted some more!

I’m disappointed that these were left out

If I ever don’t reblog this, kill me 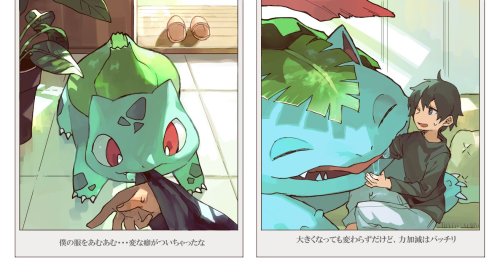 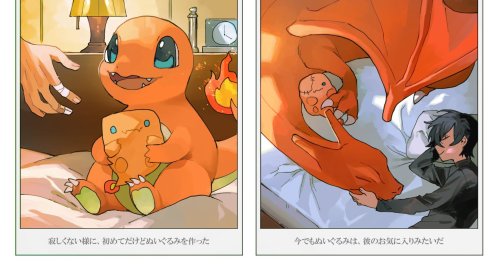 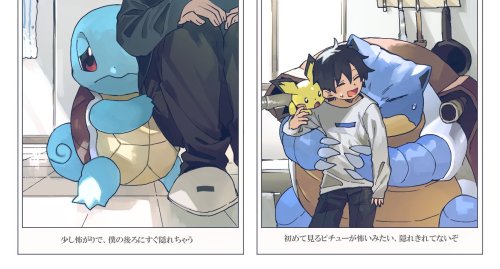 jaune: **is sitting eating breakfast in his sisters house when he hears ren and nora coming down stairs arguing**

nora: **clearly mad** “YEAH WELL I WAS THINKING ABOUT JAUNE WHILE WE WERE IN BED LAST NIGHT!”

Ruby: You guys make it sound like a bad thing. I mean I do that every-night.

Weiss: You were sleeping with me last night…

Blake: Yeah, I mean how else are you supposed to get off?

Yang: What else do you imagine before you go to sleep, but a pair of strong, muscly arms hugging you and tell you that he’ll never leave you.

Jaune: Is there anybody who is not thinking about me when they’re sleeping with someone else?

Everybody goes silent, Terra and Saphron looking guilitly at the floor.

Jaune looks at Weiss: And here I thought you had taste.

Looks at everyone else: You’ve ruined my breakfast and mood, I’m going for a walk. Don’t have sex and think about me.

Walks out the door.

Yang: Well, now that he’s said it I gotta do it to spite him.

Picks Blake and goes up stairs.

Rwby reacting to Jaune singing Remember Me from Coco

On a date, a bit of ice cream ended up on Neo's cheek, which Jaune playfully licks up. Seeing this, Neo gets the idea to drop some between her legs.

Neo savored her treat as she and her blonde dummy walked through the street.

Jaune: Hmm? Neo you got a little ice cream there.

He raised a napkin before pausing and leaning in, lowering down to lick her cheek.

With a slight smile she acted making her way to a nearby bench to sit her cute little tush down. Jaune followed ready to sit beside her and probably, likely be forced into pampering her. He was however stopped when her foot raised before him to stop him.

With a smile she acted angling her ice cream, letting the melted treat drip just below her Beacon Uniform’s skirt unto her milky smooth thighs. Her smile grew as her brows wiggled in a silent demand.

He knew a barrier was up, on that let him see the surrounding but not the other way around. A act he was sadly accustomed to. Which was why he got on his knees, what everyone in the park saw was the blonde pull out a ring and her cover her mouth tears in her eyes as they clapped at the new married couple.

What was happening was the surrounding cheering on the blonde as he licked the melted Neapolitan of his Neopolitan.  And herself spreading her legs making it very clear he wasn’t anywhere near done as her panties shattered to reveal her pretty pink pussy where she scooped off a pit of her ice cream working it into her diamond breaking snatch, the chill making a shudder run through him.

He leaned in, parting her legs and licking his ice-cream, making her gasp as her head threw back. She cried out a silent moan, never happier that nobody could hear her scream!

Bleiss’s Scroll ringed and opening it she checked what fucking video was worth several of her fucking friends linking to her. Then she saw her Darling on knee proposing to her teammate!

The door slammed open and she turned to see Cereal Bitch with her weapns drawn and murder in her eyes and Pedo-Bait much the same Crescent Rose locked and loaded a bone chilling dullness in her eyes.

Pyrrha: We’re gonna to find you Partner, we have… Questions for her 😠

Ruby: Yeah… like how many anti-tank rounds she thinks she can take…

Pyrrha: Are you with us or against us Gelé…

Bleiss: Let me get Bitch Maker…

Aphrodite, during twenty questions: What’s something that lives in your head rent-free?

Jaune: *Laying comfortably in bed under his warm blankets* Uh? Aren’t you a little cold Yang? It’s like, 10 degrees outside and snowing?

Jaune: *Sighs and holds open his blankets* Come on Yang, get in here before you turn into a Yang-cicle. 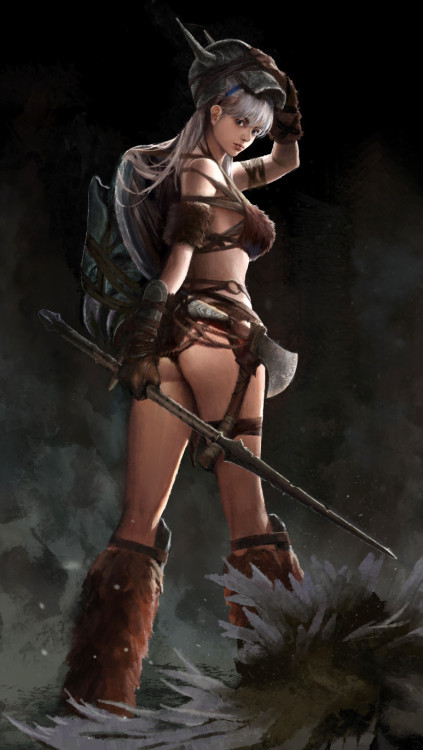 You know whats sad? Team RWB spent this whole vol in a mansion. It doesnt matter that this vol takes place over 2 days, they spent a majority of it in another house while things were happening. And even worse? None of the fndm, besides rwde, is going to have a problem with it. The problem is right there and they dont even care.

IT’S HILARIOUS NOW AT THIS POINT LIKE THE WAR IN ATLAS IS OVER. SALEM WAS DEFEATED, AND NOW THEY GOTTA BE LIKE “WE NEED A VILLAIN NOW BECAUSE OUR HEROES SAT AROUND DOING NOTHING BUT DRINKING TEA THIS WHOLE TIME OMFG”

I laugh so I don’t cry at how incompetent our heroes are. If this was a better written show, they either would’ve shown why they deserve to be heroes by helping however they can, or the narrative would call them out for doing jackshit to fix the problem they caused.

2) Have a Big Harem of Furries

#would you rather
12 notes
dragonkings444 · a day ago
Text

Oum Dammit I Love My Girlfriend!

Jaune: C'mon, we got a big day tomorrow 😁

I’m Gonna Motorboat The Fuck Out Of Those Delicious Pecs 💕 cardin tells your jaune ship that jaune is cheating on them. how do they react?

Cardin: Yes! Now i say we could get back at him and by that you coul-

Cinder: let me stop you right there, you see when I asked if you were “serious”, I didnt mean as in your claim, I meant “are you actually serious in trying this with me?” And the fact that you were, is just pathetic.

Cardin: Oh c'mon! Why are you even with Arc! Girls like you should be with real men!

Cinder:… *smirks seductively* soooo… *walks over to Cardin, hips swaying* in this idea of yours would I walk up to you like this?

Cinder: would I then drap my arm around your neck, hanging off of your big, strong body? *does so as Cardin smirks*

Cinder: and then would I gently caress your bulge?

Cinder: *Smirk turns evil and sinister* and would I use my semblance to heat things up? *starts to use her semblance, scorching caress, and grips the back of Cardin’s neck roughly, nails digging in so that he can’t escape*

Jaune: *enters Cinder’s dorm room, she gave him the code* Oh Cinder you wouldn’t believe what happened to Cardin, I was in the infirmary after that spar with Yang but then Cardin is practically wheeled in, crying like crazy. From what I heard, his crotch was badly burnt, like a blow torch was left on pointing at the most heat conductive piece of metal and that metal was shoved directly onto his downstairs business while it was still red hot. They figured he was messing around with fire dust but then said that he may have encountered a baby manticore because of the claw marks on the back of his neck. He might not even be able to have kids because of the damage. Since his crotch was pretty much gone, they set to work on saving his vocal cords, apparently he screamed so much that they were torn to shreds. But enough of that, how was your da-

Cinder: *Washing her hand with scolding hot water and soap, anti bac cream and even bleach for the 5th time* oh hi babe. So you were saying something about Lose-chester? Shame. Then again its probably best his off spring don’t plague this world like he did. *walks over to Jaune and give him a kiss*

Jaune: *puts his hands on her waist* eh yeah, so I take it you had a nice day.

Cinder: it was pleasurable. Care to end the day with even greater pleasure?~

Jaune: *internally* i have the best girlfriend ever!

*Jaune and cinder laying in bed nude and sweaty*

Cinder: oh I was just making sure you know who you belong to~

Jaune: yeah, the bite marks and hickeys should do it. But you know I would never leave or betray you like that Cinder. I love you.

Cinder:… okay how did you know what that now dickless fool said?

Jaune: You may not say it but one of the things you love about me is that I know what you’re thinking, better than anyone else.

Cinder: Okay besides that, I have another question.

Cinder: you said Xiao Long put you in the infirmary?

I wish bee fans will just admit they like the ship for the aesthetics and don't lie by saying it's well developed and earned cause it isn't to any impartial viewer with a brain. Ironically it would be better received if the writers didn't try so hard to force "will or won't they" on us so obnoxiously.🙄

It’s fine to like BB for the looks or because you liked their personalities together early on, but there is nothing funnier than people trying to insist that it’s good writing when most of the legwork was done by everyone but Yang and Blake.

Blake didn’t return to her team because Yang helped her realise she was hurting them by running away, Sun did that. Blake didn’t give Yang the strength to put her arm on and go out into the world to find her sister, even though she was still scared and hurting, Taiyang and her teachers did that. Blake didn’t even have a talk to help Yang see that she didn’t want to hurt her, but she wanted to protect her, Weiss did that for Yang.

By the time Blake came back, all the anger that Yang rightfully felt was gone and she just… accepted her back, I guess? The short fight in the shed wasn’t because Blake left and hurt her, but because Blake accidently said something that offended Yang, and rather than make that clear, Yang just stormed off.

That’s not a healthy relationship. These two never talk about their problems, they just leave each other and then magically feel better when they reunite. They did it in V6, and now they did it in V8, except this time they weren’t even the ones who had the fight.

Which of the girls would have a shirtless picture pf Jaune as their wallpaper?

My Actual Answer: Yang, May, Nora, and Neo

My Comedic Answer: All