I am the eater of worlds.

We looked inside some of the posts by fracturedquintessence and here's what we found interesting.

@fracturedquintessence  has honk for a starter

“I never knew that you also collect puppets! Did you also made these puppets?” Harley said as she picks one up, observing it. It’s a puppet… . That probably question the owner about it, but Harley doesn’t judge no one not even puppets. In fact, she find it quite fascinated by the weird puppets!

If it wasn’t for the fact he literally just leaves the things laying around in plain sight where anyone can just pick them up and play with them, Dirk might be a little more concerned about someone messing with his plush collection. It isn’t like he uses them the way the name would imply they should be used. “Those things? Fuck yeah. I’ve been making them since I was a kid. Or. Well, a lot younger than I am now anyway.” So smooth, bro. “I could make you one if you like? If I can find the plush for it, you can have it in any colour or pattern you want.”

Perhaps my favorite button prompt ever

Since everyone else is doing it: Top or Bottom?

I guess, technically. Since that body blew up…

What if I just try my first name?

you are swagless it disgusts me

with all due respect, which is none,

somebody: hey are you okay?

me, beating my repressed memories back with a stick: fine, why do you ask? 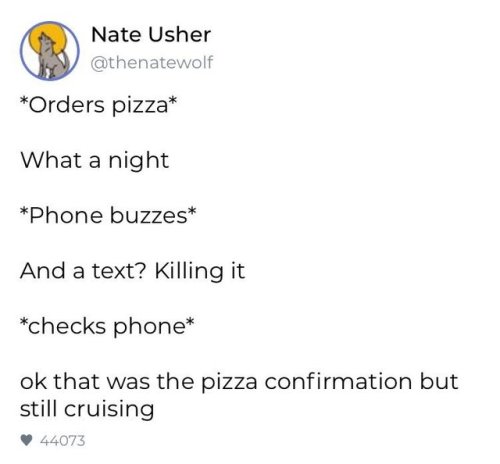 “Cruise for MILFs with me at Walmart babe.” latula OSBHJHVXBHHVCC

ONE HUNDRED - AND - SEVENTY EIGHT DAYS AND FIFTY - EIGHT MINUTES   —   that is how long it has taken to form a watery opinion of the humans,   in particular the striders.   time is fickle and flows weird and maybe he counted it a bit wrong;   maybe it was shorter,   maybe it was longer,   but he has existed for eons,   millions upon millions of years,   and so the temporal movement granted the title of time really doesn’t matter much anymore anyways.

(   your name is cronus ampora and you’ve decided that you don’t really fancy dirk strider all that much.   )

pointed envy,   a sane mixture of pride,   and a fair share of wrath doesn’t create the grandest of cocktails but that’s okay,   it’ll always be okay,   because dirk strider is still accepted by his peers and drawn into intricate conversations and asked nonsense questions despite his abrasive personality and sharper - than - life words.

cronus is not one to rely on hope much more,   even with this new world to explore,   and he’s not one to believe that only that will grant him the things he desires.   what he does know is that dirk strider is stealing his cool and that’s not fair or right.

he’s jaded and bitter but he hides it well behind curled lips and lilted brows.   cronus has forsaken to show the white shirt today in favor of a leather jacket zipped all the way up to his throat,   the chill of autumn seeping into his bones.   when water is cold it’s still a warm blanket but it’s the biting gales of the wind that gets to him.   cronus’ hands are shoved deep into the pockets of the jacket,   left hand’s fingers wrapped around cigarette box like a life - line.

he offers a not - quite - careless shrug,   the stick in his mouth almost falling out if he didn’t bite down on the filter in time.

The homonym adjacents of his name followed by the correct version of his name, grab his attention enough to bestow upon the speaker. He wasn’t actively ignoring anyone when the guy started talking nor was he doing so now. Dirk had simply been going about his own business, not really worrying about anyone else. It isn’t his fault he is a huge star in the world. He did help create the place, after all, in as much as any of his friends did. The fact someone is being bitter about it in his direction is a bit surprising. Maybe it shouldn’t be, but it’s not something he thinks much about when he is just trying to go about his daily life.

He notices the tension and the general displeasure of the troll speaking to him. He actually has a vague idea of who the guy is, an Ampora who looks like he stepped out of the movie Grease, up to and including the whole cigarette motif because humans gave no fucks about what they did back then. Dirk holds very little opinion of him, other than having heard his reputation for being a bit smarmier than is ideal.

“Sounds like some sour grapes bullshit, if I ever heard it. I’m not stealing anyone’s spotlight. It’s right there if someone wants to hop to it. I’ve always been more of a shadow guy myself, hanging out in the background, contributing to the mass and directing the path of the universe more than being the brightest star in the sky. Sounds like you got yourself a personal problem here, Cronus, and you might want to take a look at it if you’re unhappy with your lot in life.” That sounded a bit harsh, perhaps. Although Dirk believes it to be true. Despite that, he tacks on an afterthought to in an attempt to soften it a bit. “Unless there’s something you think I might be of assistance with, in which case, hit me with it.”

“See, now that’s what I thought too? Of course, I was like three sweeps at the time and had no idea that rhinoplasty has nothing to do with looking like a rhinoceros, which I only barely knew what those where. They are these giant grey mud beasts that look like pigs with a couple horns coming off their noses, so not the worst thing imaginable, but definitely not anything I would pay money to look like. But no. It just means a nose job. It’s literally just making someone’s nose look prettier. So still a waste of money if you ask me.”

The side of his mouth quirks up in amusement at what she would go for. “Dragons are pretty badass. Can’t go wrong with that. It’d be one hell of a lot of work, but totally worth it in the end. You got any sort of design in mind? Hypothetically, of course, since I doubt anyone is offering dragon transformation augmentation yet.”

“The first time I heard about rhinoplasty was wild; imagine paying money to look like a whole rhinoceros.”

“Sounds expensive, and dumb! Why pay to look like a Rhinoceros?”

“I would pay to look more like a dragon, though! Wings and scales and talons and a tail! Now THAT is cool.”

“ok listen this may be the sleep deprivation or possibly the anxiety of starting a new semester in like forty five minutes talking but 5 am? great time to be awake. my third eye is WIDE fucking open. sleep? government conspiracy to keep us unwoke. think about it.”

Dirk has the look of a man who hasn’t slept in a while either and is being powered by whatever he happens to find in his fridge, copious amounts of sugar and caffeine and sheer willpower. His hands flail a bit has he talks in a rapid-fire stream of consciousness manner, trying to get everything out because this person gets it. “Are you kidding me? Five am is the best time to be awake. But it only counts if you haven’t slept. Preferably in multiple days. You absolutely cannot wake up and be the early bird, which is a morning lark, by the way, did you know that? And have it count. It just does not work. That third eye remains firmly shut if you give in the to diurnal propaganda. Or even the fully nocturnal propaganda. Crepuscular or bust, baby. It’s the only way to go. If you’re going to bother with the whole being asleep at all. The government wants us to dance only to their tunes. Fucker, I only dance to mine. I am awake in so many dimensions it would blow your tiny minds. Take your unwoke bullshit and begone from my presences, you absolute fuckin’ plebe.”

#Dirk please get some rest, #presences is not a typo, #he really did pluralize it, #memes, #creatire
1 notes · See All
fracturedquintessence·14 days agoAnswer

His face is a mask of the most solemn sympathy imaginable, arm reaching out to pat Roxy’s arm. The gravity of the situation requires only the utmost in seriousness. Absolutely no dramatics should be allowed here. Not when a friend believes their life is potentially in jeopardy. “I’m sure a piece of fresh fruit isn’t going to kill you. Unless you have a previously unknown allergy to our good buddy malus domestica, in which case you’re probably fucked. We’ll know either way in a few minutes.”

Okay so maybe the utmost in seriousness wasn’t going to happen because she was just being dramatic herself.

“I slowly chased a stray cat for two blocks just to pet him and got a scratch. am I valid?”

“Pretty sure the cat would say no. In fact, the cat would argue that makes you the opposite of valid. But I have a very important question for one. One which will determine the entire future of my view of your validity, so you should definitely take the time to consider your answer carefully before giving it."

He leans in close, the intensity in his expression lending itself to the drama of his warning. "Did you succeed in petting the cat?"

Question delivered, he pulls back, waiting with crossed arms for the response he has promised to judge stringently.