hereforthemoment
Nesta Archeron Deserves Better
No one likes a mad woman (you made her like that)
Explore Tagged Posts
Trending Blogs
Statistics
We looked inside some of the posts by hereforthemoment and here's what we found interesting.
Inside last 20 posts
Time between posts
7111.45
Number of posts by type
Photo
1
Video
0
Audio
0
Text
19
Chat
0
Answer
0
Link
0
Quote
0
Fun Fact
In an interview with inc.com, David Karp (Tumblr's founder) admitted, "Being on computers all the time makes me feel gross."
hereforthemoment · 43 days ago
Text

His character regressed in a big way.

“Eris is a sadist”

…not from what I’ve read

Meanwhile Azriel is a whole ass torturer for the Night Court

If she had any ulterior motive to dancing with Eris aside from wanting to, I’m going to be pissed

If she sleeps with Eris just to make Cassian jealous, I’m going to be pissed

I think a part of Cassian becoming Nesta’s friend is seeing her pov and being more open and accepting because what happened to her, how she was villainized because of Feyre’s opinion, shouldn’t happen again. Therefore, Cassian shouldn’t judge Eris for not dragging Mor to the Autumn Court

I hope Nesta genuinely befriends Eris and because he’s Nesta’s friend, Cassian will be able to see him for who he is rather than who Eris has been made out to be

I don’t support someone using and hurting another person this way. Eris isn’t evil and it wouldn’t be justified.

Feyre is just as much to blame, if not more so, as Tamlin is for her sisters being turned far against their will

Mor told Nesta to keep her forked tongue behind her teeth

You had me in the first half ngl

Even if Cassian starts treating Nesta well in acosf… what does that really mean? They’re going to be away from the IC so??? His relationship with her takes a 180 when they’re alone together v. When he’s with his friends

Nesta deserves better than the way Cassian treats her

“Fuck you and fuck her too”

I just think it’s funny that Mor (who’s over 500 years old) always has a glass of wine in her hand and it’s quirky, is in a love triangle with Azriel and Cassian even though she prefers girls and it’s interesting, wears revealing clothing and it’s brave

But Nesta (who just turned 24) turns to alcohol and sex as a way to cope after war and the cauldron and watching her father die in front of her (his blood splashed on her damn face) and she’s an alcoholic… she’s a slut…. she’s a burden

That’s just kinda funny to me 🤨

Amren said Nesta fucked anything that moved and Rhys agreed

Thank you but no thanks to the hypocrisy

let’s not forget extreme poverty and famine are fresher in Nesta’s memory than what it could ever be in Cassian’s, who was taken in by a queen as a child, over 500 years ago. And has been rich ever since, regardless of how he chose to live his life later. Cassian judges Nesta’s clothes, the state/tidynes of her little apartment, the apartment itself, the places where she drinks. However much of a low bastard he’s being viewed as by Feyre and Rhysand (who really are leagues richer than him), he still is rich, arrogant and disdainful. However much he choses to believe Nesta is a fancy arrogant bitch, she never had any more than him AND she genuinely is a poor sick orphan who owns absolutely nothing and is welcome NOWHERE.

And that’s something I don’t enjoy in these books, is that the own story contradicts itself. You can’t say Nesta is a posh bitch and Cassian a cheap bastard, than have her starve in the slums wearing worn out torn clothes, while a filthy rich Cassian comes to visit judging every low and dirty inch of her state with a scrunched nose

Even though Eris refused to hurt Lucien and his girlfriend

If you don’t ship neris, fine. But if you want Nesta to behave like and work with the IC…. 🤢

Eris did nothing wrong to Mor

Her family nailed a note to her chest after beating her, NOT ERIS

By refusing to marry her, he did her a kindness!!! She said she would rather bleed out than marry him!!

“Good to know that after five hundred years, you still dress like a slut.”

He called Morrigan a “slut” because of her clothes. Saying that this male is better than Cassian it’s a shame.

Eris ended the engagement with Mor because he knew she didn’t want it.

Eris refused to be present for the torture and execution of Jesminda.

Eris ensured Lucien made it to Spring so he would survive.

Eris has shown through body language to be protective of his mother.

Eris has been brought up under a tyrannical father who is also his high lord, in a court that is notorious for being two faced. A court where it is nearly impossible to survive without being cruel. Eris is presented as also being two faced, showing moments of benevolency in between his arrogance.

Eris has been shown to not be wholly good, but not wholly bad either. It’s almost like he’s a complex character in a complex court that we don’t know a whole lot about right now but what has been made clear by Maas’s context clues is that he is expected to behave a certain way in the public eye given his father is an ancient and cruel high lord.

But yeah let’s get upset because he said Mor dressed like a slut and thus he’s the epitome of all evil. I absolutely understand not slut shaming but this is a fantasy setting that has clear indications of taking place during an older time where women were, unfortunately, viewed as beneath men. It’s not a 2021 social narrative.

Why y’all continue to project a modern social and political narrative onto a medieval fantasy world is beyond me.

He didn’t do anything to Mor. Her family did. He didn’t want to be in that arranged marriage either. Everyone who hates him ignores crucial details about his character.

Mor and Eris have both wronged each other. Slut-shaming her is just an easy insult, there’s no deeper meaning behind it. Obviously it’s not okay to do, but it’s also not okay that Eris has been repeatedly assaulted by the IC because Mor acts like Eris abused her when it was only her family that physically hurt her.

Nesta @ feyre and the IC in acofas and the acosf teaser

don’t even try coming for me, this is a joke and I’ll stab you

Bro! We all know that nesta was mean to feyre and that their relationship was not the best. But we also know to acknowledge her trauma the way every other characters trauma is respected. We exist. We arent unreasonable 😂

Nesta was mean to Feyre, but Feyre is worse to Nesta

Feyre is sending Nesta to a war camp. I mean…

It’s not that we can’t acknowledge Nesta’s flaws, it’s that nesta’s mistakes are comparatively nothing to what Feyre and the IC say/do to her 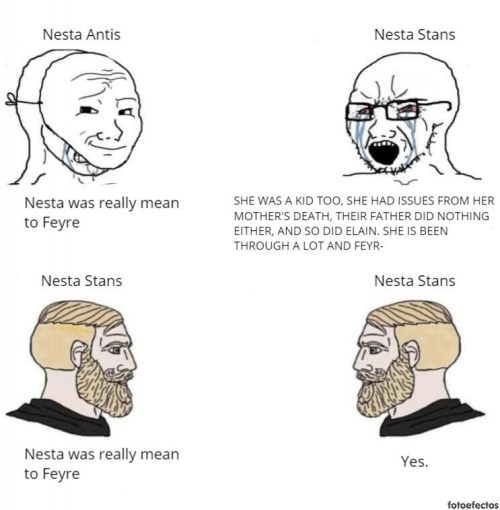 Cassian treats Elain like a little sister but flirts with a Feyre. Cassian is way too intimate with Mor.

Cassian hasn’t been that person. But Eris would be