do not fear for the end is coming soon. we can revel in the thick clotted mud of the fields. we can run away from the spider farm (@weepingfireflies); header by @yilingicons

We looked inside some of the posts by incorrect-c-novels and here's what we found interesting.

“It’s alright, even if you aren’t a son of nobility anymore, you are still you, and in your heart there’s a spark, sooner or later it will shine brilliantly. I can see it, and in the future, someone else will also see it."

"People always liked to find someone who seemed pretty good, place them in the depths of their hearts, then project their own beautiful fantasies onto that person, turning them into the source of light in their life.”

“Did they deserve to die just because they were slaves? Do they not deserve a proper burial just because they were slaves?! …They had shed their blood and lost their lives, just like the others! They already have no father, no mother, and in the end, they don’t even have a proper status. Why is it that the lives lost by the Yue Clan, the Mo Clan, and the Murong Clan became heroes, but all my brothers get when they die is being stuffed into as a single hole, huh?! Why?!!"

"A place where in just a single night, those sold to them would have their flesh scraped clean off their bones, their insides devoured until nothing was left.” - in regards to Luo Mei Garden Villa

“This wave of enemy troops are like mad dogs. If the two of us die today, there isn’t even a pretty lady to keep you company. It’s just you and me, so you’d better not turn your back on me.”

“Out of the three hundred and sixty five days in a year, if he could show up for just fifteen, it would be considered not too bad."

"But this was just how Gu Mang was; even the biggest things would seem like nothing for him. If the sky were to fall, he would probably just grin and tear a piece off to use as a quilt.”

“He was always hard at work absorbing every trace of kindness in life, then putting his whole effort into making small flowers bloom.”

“He could have dug into his living, burning chest, let him look at his heart which was nearly dying from the agony it felt, and they would have only jeered at his passion, suspected his kindness, scorned his overconfidence, and made fun of his trembling sincerity."

"I look down upon you false gentlemen. Clearly, all the three poisons of greed, anger, and ignorance are present in your hearts. Yet, to pursue fame and a clear reputation, you don’t dare to admit to them, nor do you dare to let go of them."

"Man is no more than lust given flesh and blood. Some people are held back from progressing by the vices, and others pursue a grand and pristine reputation. However, if carnal desire is lust, isn’t the desire for a pristine reputation also considered lust?"

"There were clearly no promises made, no glimpse of a possible future together…. Yet it seemed as if they could continue to fall into each other’s arms for a lifetime, a heart that would never grow cold. They had nothing, and could only take their affection, possessiveness, and ownership, and turn them into that sort of intense, desperate intimacy."

"They had entered hell for Chonghua, and while struggling at death’s door, they dragged their broken bodies and crawled back out of it. After that, the attitude of that man seated on the throne seemed to say, Hm? Shouldn’t you all have died in hell? Why did you come back? What am I supposed to do about this? I can’t possibly let an army formed of slaves with a slave for a commander be buried on the Mountain of War Spirits when they die, while bestowing those who survive titles and rewards on par with that of nobility now, can I?”

Take your unfunny Binghe hate out of the Bingqiu, Scum Villain, and Binghe tags. Either that, or do the same memes for WWX and HC, who are much more evil than he is.

How dare you assume Luo Binghe isn’t my favourite character.

I’m… still not over this.

Hua Cheng I can somewhat understand, but Chu “lotus blossom beauty” Wanning??? Yuheng “Sir Chu of Lin An” Elder? Chu “disciples are well-known to risk broken legs/death to spy on in the bath” Wanning? That Chu Wanning? 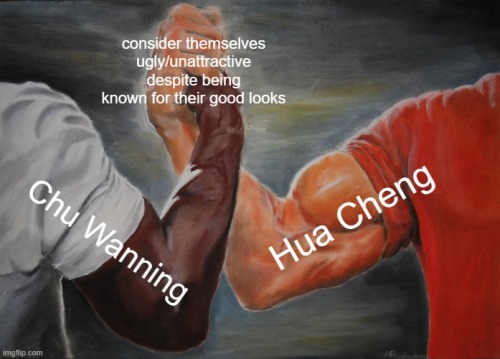 The worst part of MDZS is that Wei Wuxian doesn’t remember being dead. Imagine the humour of him forgetting he’s alive and walking head-first into a wall, reinforcing the “crazy Mo Xuanyu” theory. /j 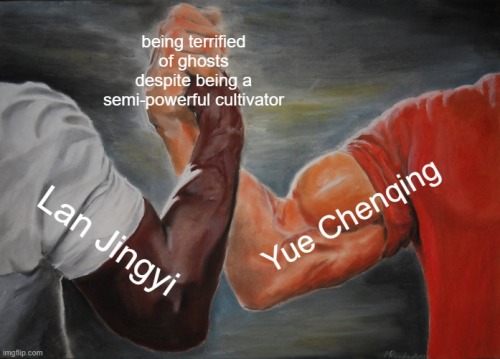 I hope Meatbun Doesn’t Eat Meat is enjoying her VEGETARIAN BULLSHIT with a TALL GLASS OF MY TEARS to wash it all down. F u c k 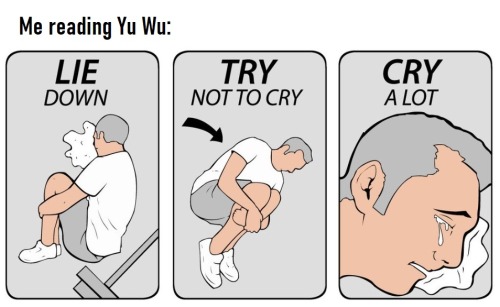 Can we just talk abt Xie Lian with this hairstyle..