We looked inside some of the posts by jazzy-art-time and here's what we found interesting.

//fun fact, this is how she legit looks at first in JazzQuest when she first appears iodhsOGHSDG i hateit

Originally Jazzy didn’t always have the fin bite when I first made her when she was a sona? I added it over time when I went through a depressive episode and stuck with it?

But in JazzQuest lore, its gonna be something really fukcin stupid as to why she ends up looking the way she does IOGHDSOG

when your character has multiple pronouns, what do we use the most? sorry if stupid question

When a character of mine has multiple pronouns, feel free to use whichever one!

If the character has a Preferred Pronoun (and a secondary one they don’t mind but HAVE a preferred pronoun) then I would like it for you to use the preferred one the most!

But if it’s just a list of pronouns, with no specification for preference, then use whichever!
I list them all there for anyone to use any one of them no prob!
Or if a character transitions or uses a new pronoun, then use the new ones!

If you ever have any questions on that kinda stuff, feel free to ask! I don’t mind it and it could possibly help a awkward situation in the future!

i get bad feelings a lot lately
rip

Finally settled on a design for a main character on JazzQuest!
A “Galarian MimeJr”
Classy’s closest friend and keeps him grounded.
Thought that getting Classy into the Guild would help him out with what was happening in his life, but Gospel finds it rough to keep Classy going

then it shows up. 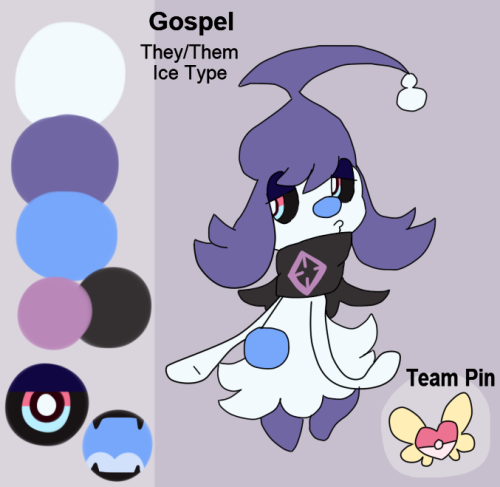 Ashley “Ash” Reference, September 27 2020
ORIGINAL DESIGN AND ARTWORK (on the right) MADE BY @lacusmoonrise

whose child…. is this……
find out NeXT week on Ask-Scrafty 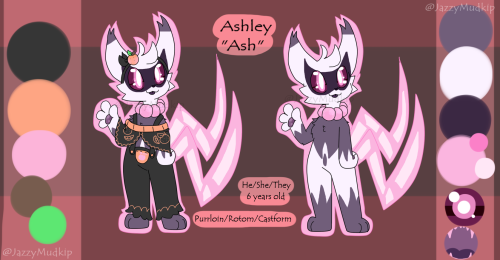 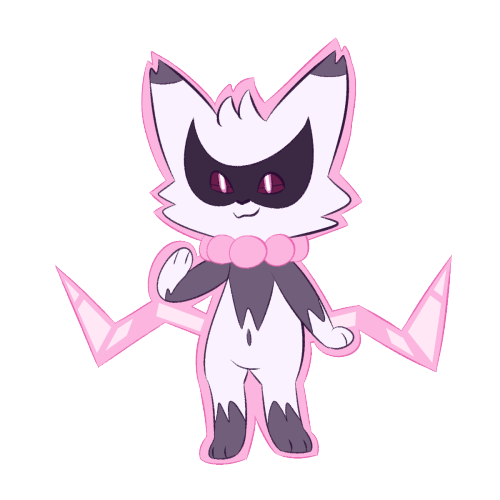 I have my own lil headcanons for each color n stuff, maybe I’ll do the others sometime?

- The Electrical Person, specializes in that area
- Often gets accidentally zapped because they always spill drinks in the room
- Crew stuck a wet floor sign on their helmet as a “cone of shame” for always spilling drinks. Cannot get it off
- HATES Weather Node Mobile Tasks.
- Constantly needs the map to move about as they have the memory of a goldfish
- Wears a walkie to communicate with others constantly, also has a Emergency Beacon button on their side.
- Nicknamed “Gurgle” because they also choke on their drinks a lot and spit it up everywhere, making a gurgling noise. Nobody remembers their real name at this point.
- Finds any lost children on the ship and takes them to a playroom to be safe and away from the madness.

- AS IMPOSTER -
- Deadass has a 1% chance of being the imposter, but everyone is suspicious of them anyways.
- When Imposter, the wet floor sign on their head slowly turns red instead of blue slowly over time. More the kill the redder it gets.
- Gains electric abilities. So its both body horror but… electrified wires inside their body that can lash out and zap. 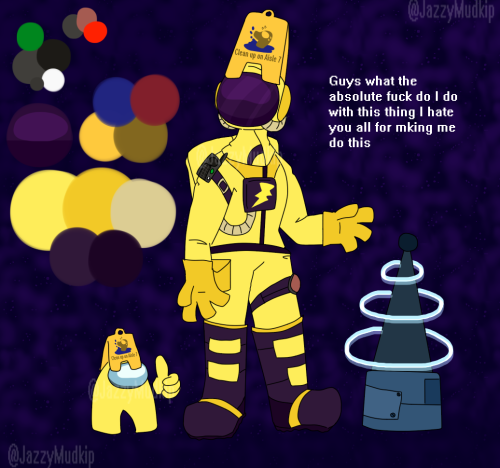 But then I realized how different they both are and feel less bad now.

Jody and Diane are just Abel and Cain

#need to draw more Solo and Rexmile. a collective brain cell, #I need some Dumb Brother shit. like the Boys will be Boys saying but instead of gross stuff they are singing the halo theme in a bathroom, #not art, #text post, #delete later
4 notes · See All
jazzy-art-time·7 days agoText

ALRIGHT BEFORE ANYONE SAYS ANYTHING….
so THIS…
HAS A LOT OF ISSUES IN IT.

I’m well aware of ALL of the issues with it… trust me.
You don’T GOTTA TELL ME i REALLY DO NOTICE AND KNOW don’t @ me i knoW

But really bothering me with like…. the part with Red rotating in space is really janky and at one point randomly spins faster, this is due to me mixing my sai files and then NOT saving them as SAI so I can edit them SO… Overall really janky and jUST??? WEIRD???
Also not a LOT of frames (only 100 frames total in this) so of course its gonna be janky due to lack of inbetweens.

BUT!
I’m well aware of all the mistakes I made, as well as the fact that maybe if I had more time (my mother is visiting next week so i couldnt ignore her to animate this and it was due in a week!)

I know its not perfect, maybe not even good BUT…
I am happy I got to join a MAP again…

I missed doing it a lot.
So this was a fun lil thing to do!
Also Among Us is such a fun silly game and talkin with the others in the MAP with their AmongUsOC’s has been nice n fun!!!
///even tho mine is so boring ts just a minion with a fuckvkgkin WET FLOOR SIGN BUT

I hope to get better as I get back into the groove of animating stuff again!!
Also Windows Live Movie Maker like to make my videos cronchy grrr gotta fix that somehow one day :’0

#drawing the comic in binary is best and so easy. Not the best quality i can offer but damn son I shat those out, #shitpost
9 notes · See All
jazzy-art-time·13 days agoPhoto 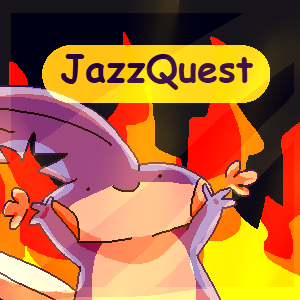 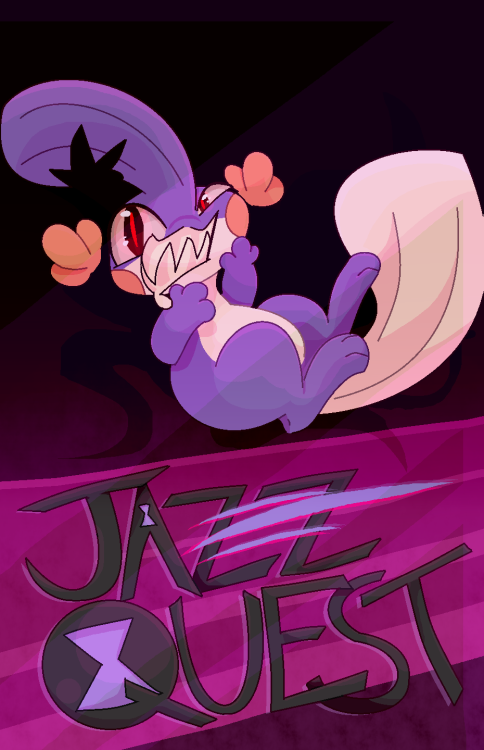 #the dEED IS DONE...., #should post tomorrow at 10am on both tapas n tumblr.... hopefullY, #self reblog, #Jazzy, #mudkip, #JazzQuest, #my art, #digital art, #sfw, #i wont reblog every page like this but this one in particular ghfsodghsd, #pokemon
26 notes · See All
jazzy-art-time·14 days agoPhoto

chanceinthepants: Ha ha, I drew your sona and there’s nothing you can do about it

HFSAOIASIOFHIOASF
HOW COULD YA DO THIS TO ME.
You CAPTURED HER ENERGY VERY WELL GIOADHGIOHDG

I’LL… GET YOU BACk FOR THIS RanDOM ACT OF KINDNESS… 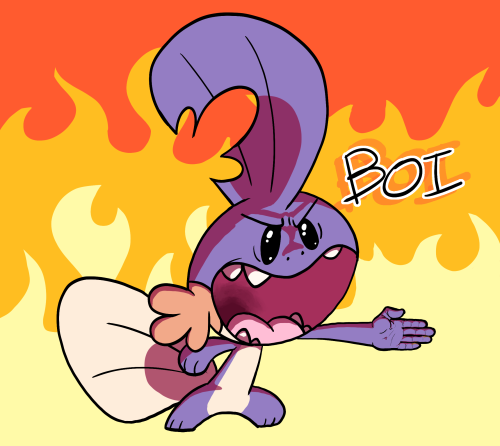 THIS SUNDAY SUND AY
S U N D A Y

Mixture of a Priest and a Cursed individual?

Cursed priest by choice, purposefully performed ritual for immortality.
More Liepard with Scrafty traits and more like a scrafty moveset.
No skin underneath fur, just scales.

This is their only emotion. Their expression never changes from this one, not even eyebrow movements. Mouth never opens either but still speaks somehow.

Never let these two fuse, the ultimate apathetic cursed being.

13 for 2+ meme, let’s do Nana and Abraham roleswapped

THE HEADLESS HORSEMAN and a very… tired englishman.

Abraham struggles to deal with the children, he never actually wanted children of his own, so when the girls were dropped on his doorstep, he was greatly upset.
Not enjoying the constant affectionate headbutting that scraggy do as kids, or just Diane running around squeaking.

He struggles to sew clothing so he just orders American Girl outfits for them.
He has issues connecting with Jody as he isn’t as sensitive to her emotions, so Jody doesn’t really come out of her shell as much.  Diane however, adores Abraham and calls him Dad (unlike with Nana, Diane never calls Nana mom in canon).
He loves the girls but he is usually stressed or confused on what to do.
Abraham mostly fixates on his divorce with his wife and it drags him down a bit, Diane always tries to get him someone else but Abraham remains hopeful his wife will return to him.

Chloe has the name situation as canon Abraham, gave up her past of horror and murder to be a better person.
Diane seems to avoid Nana a bit and tends to constantly be unsettled by her motherly behavior towards her. and is always worried about the crest flames burning her (even tho they wouldnt)
Chloe desperately tries to cheer up and connect with Jody, but due to her sheltered nature and lack of opening up with Abraham, Jody remains sealed up emotionally.
More likely to break into their home to greet the girls.

In the world where Diane is cursed instead of Jody, Jody is her father’s favorite.
So the father chooses to place the curse on a infant Diane.
Jody becomes spoiled and believes she is better than her younger sibling.
Their mother dies of natural causes but Jody gets angry at a very ill toddler Diane for “breaking one of her toys” and Jody then tells her father that Diane murdered their mother.

Their father kicks Diane out and has her dropped off in the woods to die.
Diane thankfully gets found by some rogues hiding out in the woods and becomes one of them. Relying on stealing n such to survive.
Diane doesn’t know or really do anything with The Book and Abigor isn’t around as he knew she wasn’t strong enough to withstand it.
The only way Diane manages to survive is via accidentally mugging/stealing/assaulting monsters who appear to be normal (werewolves during the day, civil vampires etc)
Although Diane remains in a constant state of sickness, the star on her cheek turns black and smells of rot and she often coughs up black goo.
Eventually she finds out what her family did to her and vows revenge against all of them.

Jody however, lived a very luxurious life. Spoiled. ROTTEN.
She was raised by her father and wears mostly obnoxious bright colors (by her fathers wishes)
She also gets a cruel nature about her, is the type to have someone hanged in the center of town for personal enjoyment.
Eventually her father becomes ill and allows Jody to take over for him.
She essentially becomes a dictator and sends out soldiers to pillage and destory.
Real BIG Azula vibes (for those who watched Avatar the last airbender)

But he is safe in the fluff.

first off this video? GOT CRUSTY AND CRISP IN EDITING i hate it but whatever its done now
sECONDLY I somEHOW GOT 1K SUBS ON YOUTUBE?? haven’t uploaded anything “decent” in LITERAL YEARS but okAY???

Figured I would share it here cuz I did spend SOME time on it????
So uh… have this my tumblr peeps

Starring myself and @lacusmoonrise because :)

#audio is from the YOU BETTER STOP vine, #video, #audio, #Jazzy, #lacusmoonrise, #pokemon, #for others, #stuff for others, #shitpost, #my art, #doodle, #loud, #shaking, #swearing, #cursing, #cussing
23 notes · See All
Next Page