jonathan-cranes-mistress-of-fear
Jonathan Crane's Mistress of Fear
Welcome to the official blog of the Mistress of Fear! I update daily with new content including High Quality 300dpi Comic Scans, Panel Edits, Gifsets, Headcanons and occasionally even Fanfic! You can call me Mistress, Fear Queen or Moffy. Pronouns are She/her or they/them. Agender and Pan. Hroo Hraa!!!
Explore Tagged Posts
Trending Blogs
Statistics
We looked inside some of the posts by jonathan-cranes-mistress-of-fear and here's what we found interesting.
Inside last 20 posts
Time between posts
1515.85
Number of posts by type
Photo
12
Video
1
Audio
0
Text
4
Chat
0
Answer
1
Link
0
Quote
0
Fun Fact
Tumblr paired up with Humans of New York to raise money for Hurricane Sandy relief.
jonathan-cranes-mistress-of-fear · 31 minutes ago
Photo

Free to print/save and color! :) This is my own version of Scarecrow, sans the hat, with his trusty crow Cornchip (something the fandom came up with and I thought was cute haha). Jonathan Crane appears briefly in this week’s issue of Nightwing. It looks like he’s opened up a practice in Blüdhaven under a fake name. I thought his name was an anagram of something sinister, but it’s even better than that. Gruidae is the family name for cranes! That’s clever~ 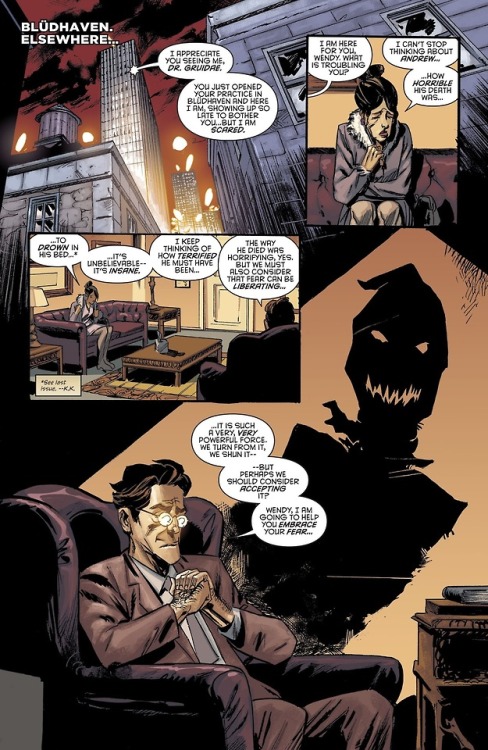 i really like drawing legs, and jonathan crane has those for days 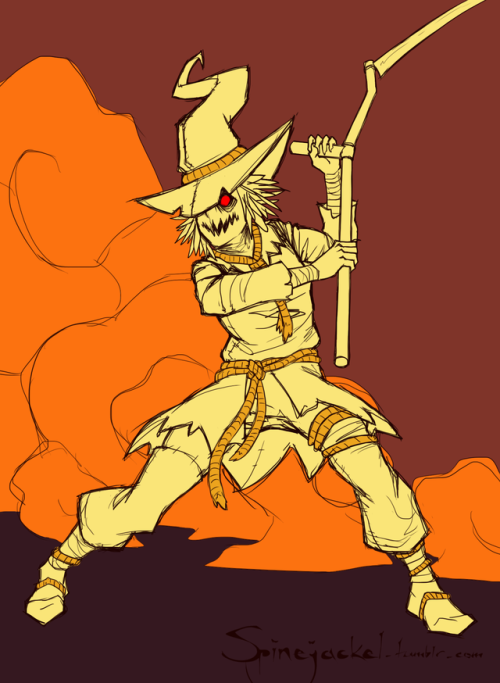 I’m in love with the art style of this comic. It’s a perfect mesh between the TMNT cartoon and the bold look of Batman: The Animated Series. If you’re in the mood for a huge nostalgia trip, this comic is a must read! I won’t spoil it, but a bunch of rogues make cameo appearances in this issue.

Also, I love how they handled Scarecrow’s subplot; it wasn’t too dark or too silly. Perfectly spooky. It was nice seeing that old burlap outfit from BTAS. 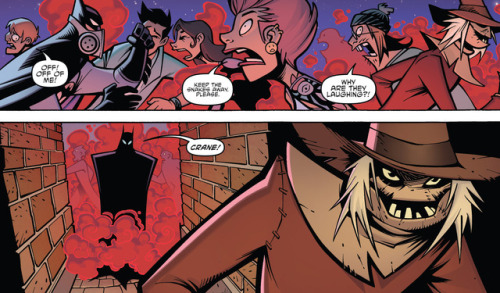 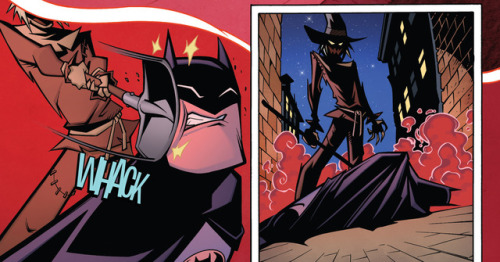 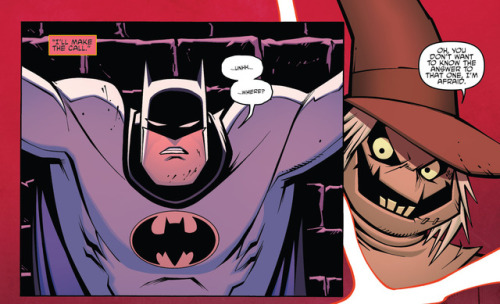 Can I just point out that we as a community call Jon a fashion disaster but IRL he’s just…messy? Like nothing he wears looks bad on its own, very frequently he is wearing ill-fitting suits or like, the spandex of Year One but none of it looks like a genuine disaster.

Crazy Quilt is a fashion disaster we don’t give Jonathan Crane his dues he’s at least trying to not look ridiculous.

That’s a good point. I think he’s messy out of necessity, he can’t (or doesn’t want to) afford nice clothes so he shops as the thrift store and their clothes can be kinda grungy.

I think he has his own eccentric style. He’s not trying to look poor or anything, he just don’t care to buy the latest thing when an old goodwill sweater will do just fine.

#Mistress Reblogging~
47 notes
jonathan-cranes-mistress-of-fear · 4 hours ago
Conversation
Natural Selection
Scarecrow
And here you can see the endangered Joker in his natural habitat.
Joker
*falls down the stairs, spilling cereal everywhere*
Scarecrow
Natural selection is coming for this specimen.
#Next Day Reblog
60 notes
jonathan-cranes-mistress-of-fear · 4 hours ago
Photo 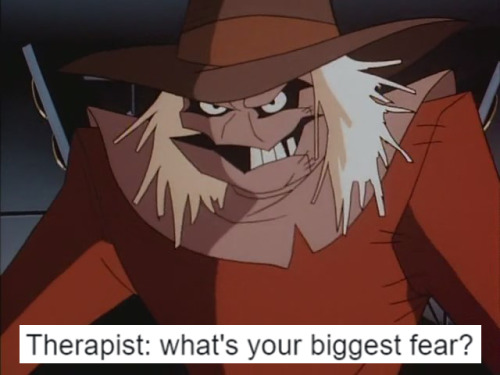 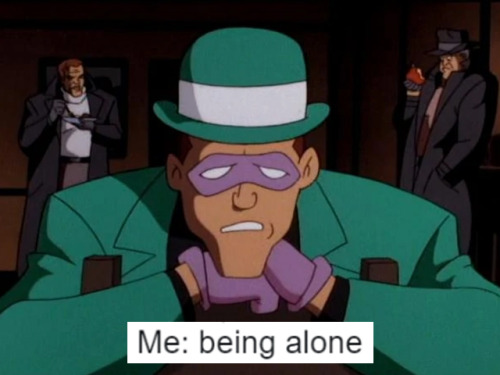 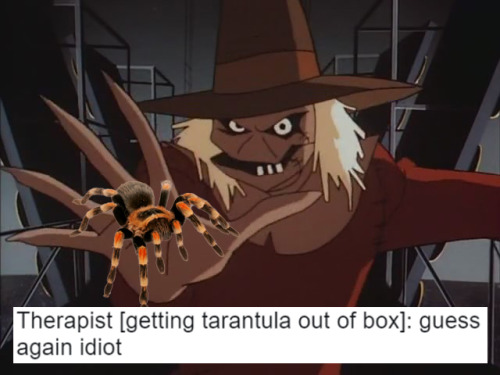 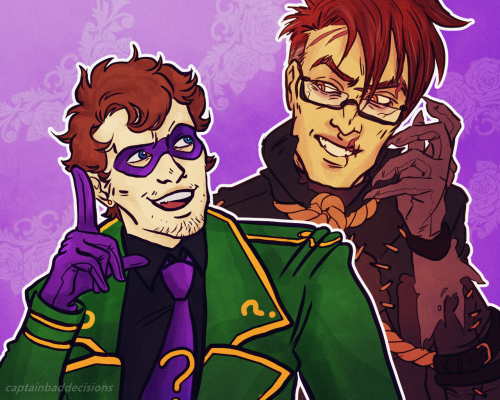 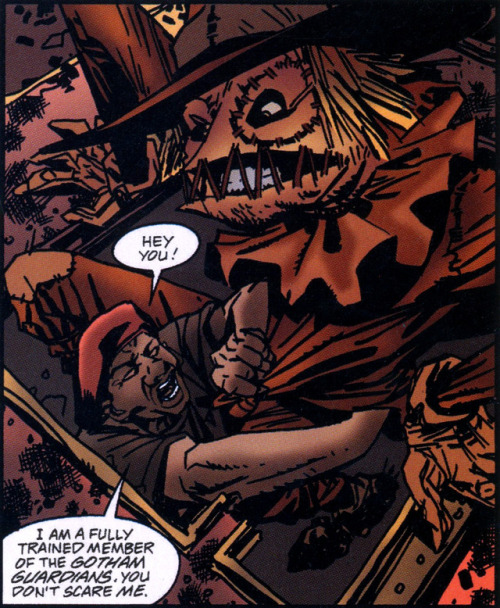 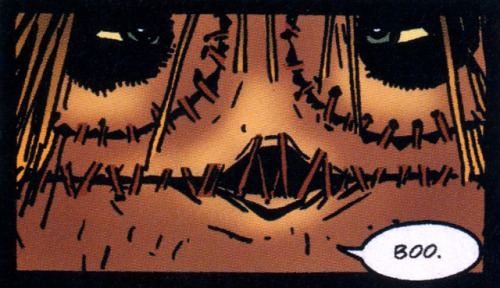 Anyone remembers me posting a WIP of this ages ago? Yeah, me neither…

Anyway, here’s the finished drawing. Had to take photos with my phone because my scanner messed up the colours😒

This ship brings me so much joy-

Jay: “They’re pretty good friends I think. villains in general aren’t necessarily known for their team working skills, but Jon, Ed and Jerv’ll get together for heists n’ stuff every once in a while….

Ego clashing happens, but they’re tight. like hanging out the Berg together a lot” I know there’s a bit of a ScaryQuinn audience on here, so…have some ScaryQuinn I did for my Ship-Tober prompt today!!

Jon was definitely not expecting the kisses he received.

Reblogs are appreciated!! They help a lot!!

Inktober prompt 18, Bottle! Jon’s had a rough couple days so he’s relaxing by having a beer with his bird friends. Don’t worry Wendy will peck him if she thinks he’s about to drink too many. 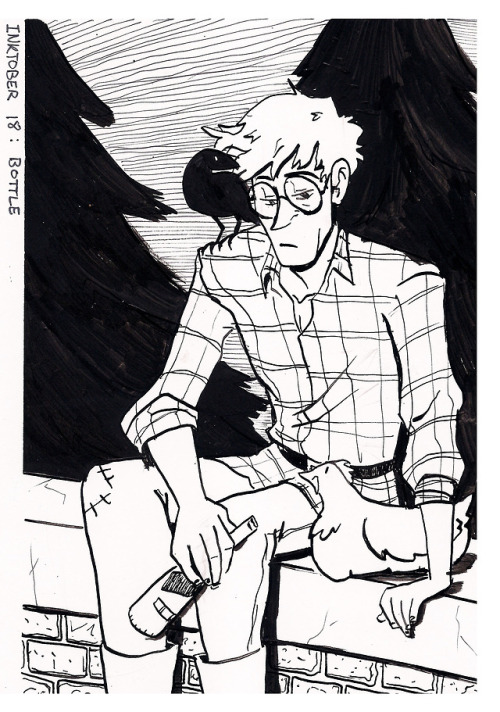