When will his confidece return?

Roses are red, Violets are blue, This is another countdown blog made for you (the reader)

We looked inside some of the posts by lookingforromansconfidence and here's what we found interesting.

Fic where the chaos fam goes to Home Depot

I’m coming with you Niko-

Fic where the chaos fam goes to Home Depot

WAIT GUYS THERE HE IS GET HIM—

WAIT GUYS THERE HE IS GET HIM—

(just gnna make my own post since i rlly want to do this ask game but can’t find the original post):

#Please send an ask if you're gonna reblog this I need human interaction, #not countdown
439 notes · See All
lookingforromansconfidence·15 hours agoText

Green, you are the banker and have the floor.

“How,” an exasperated Niko asked to nobody in particular, “How? I had boardwalk…”

“Why? Ora, why? I give you water company and this is how you repay me?” A tired Cenn said the vemself.

“She can’t disprove ~anything!” Interjected Ora, “We won fair and square.”

Takeover replied to this, “Xe have a point Green, you do remember what happened last time we combed through it all.”

“I think we all remember that day.” Spoke a somber Curt.

“Aaannnd I think that’s my que to wrap this up,” announced Takeover, and the video ended.

Do you have a chaos fam backstory? I need it for.. reasons

You shall never have my backstory!! Muahahahaha

Yea I have one, it’s not done being written dhgdshjds

#ask, #anonymous, #I can give a summary if you want
4 notes · See All
lookingforromansconfidence·a day agoText

#Ew- this number, #I don't like it-
1 notes · See All
lookingforromansconfidence·2 days agoText

Send me ✒️ and I’ll write your URL in my handwriting along with a little note about what I think of you!

#ask game, #not countdown, #I most likely won't get to the asks 'till morning but-
15K notes · See All
lookingforromansconfidence·2 days agoText

The following message was obtained from XXXXXXXXXX’s house while they were asleep. We are not yet sure why it was written.

It wasn’t my fault that I knew so much about the family that lived in the big house, not really.

Two parents, and a lot of kids is all I knew to begin with. (I had tried counting the children before. I never got very far.) They were always gathering more kids, it seemed. They were all…fascinating. Something about their family drew me in. I wanted to know more, about the mysterious girl in the suit, about the thing with horns I kept seeing in their attic window. “You know they’d take you in if you asked,” my brain whispered. “Hush.” I whispered back. I wasn’t a child. They’d never want to associate with someone like me, someone who had seen the horrors I had.

That’s what I told, myself, at least.

Maybe it was the loneliness. Maybe I just wanted something else to keep me awake at night than the guilt of my past. But I couldn’t stop watching them. They called themselves the Chaos Family. I wasn’t sure if that was their legal surname, or just a title they gave themselves. I couldn’t seem to find documentation that could confirm either anywhere. I couldn’t find any record of them at all, actually. For a while I was worried that I had hallucinated the whole story. A giant family, living in a mansion that was for some reason placed in a normal neighborhood. It was bizarre! A dream, something my head had made up to cope. But then I remembered that, well, you couldn’t find much of me either.

What really got me was how none of them… seemed like people who would need to get erased? Sure, they constantly talked about “world domination” but they never seemed to actually try that hard when it came to actually doing it. And when they did, the changes were always for the better. Mostly there was arson and petty theft. As well as a couple of murders, but the people that were killed were all awful people, so who cares? Besides, they somehow managed to win all of their court cases!

I don’t agree with burning down the whole world for the sake of a new one. However, the earth could use a controlled burn or two.

But the worst part of all of it, oh how damning it was, was that every last one of them was nice. The parent with blue hair (Ren, the kids called them) helped me pick up my groceries when I dropped them. The child with the scars steals my paint brushes when I’m outside and calls it hijacking. It’s hilarious. The one with the suit, who is their lawyer and also most definitely not human has a very nice smile. Cenn, the other parent, manages to keep all however many children in line, which is a feat in and of itself. The porcupine tried to prick me when I was out on walks. Me and the porcupine are not friends. Porcupines aside, nothing made sense. Why is the whole family wanted? What did the kids go through? How does Cenn have seemingly infinite funds? I needed to know more.

I continued searching. I found… concerning things. I put pieces together, went through lines and lines of coded messages, hunted down as much info on as many people as possible. I wrote their stories down. And the more I found out, the more I realized how dangerous it was to know. But this burning curiosity… I couldn’t seem to quench it. It was this curiosity that lead to me nearly dying. It was me knowing too much that got me noticed when I was 15. I swore that I would be careful. I swore never to get noticed by anyone again. But something in my treacherous head told me to keep going. Maybe it was because I saw myself in them. Maybe it was because I thought that they could bring leads on a different ongoing project. Whatever it was, I didn’t stop. I got noticed. It only got more troublesome from there.

I was painting when I received the letter. A plain white envelope, addressed to my name. Inside was a paper demanding I go into questioning. They said I had “very useful information.” I knew what they were talking about right away. I had seen the name of this organization in my research. They claimed they were doing good, taking down “villains and liars who want to hurt the common man”. They were delusional. I didn’t want to talk to them. I wanted no part in their plans. However… I was more scared of what would happen if I didn’t go. The organization is powerful. So I went.

I don’t wish to say all of what was said. The man interrogating me was tall, his blue eyes unnaturally sharp. He managed to take my weapons from my bag without me knowing. He knew things that he shouldn’t. I know the tapes of what happened when I was 15 are still out there, but he knew things that weren’t on the tapes. “You blame yourself for their deaths,” he said. “Bet you’re afraid of kitchen knives now, huh?” he asked, looking me in the eye, his cold blue ones piercing through me. I don’t know how he found out about the knives, about that night. He threatened to kill me if I didn’t help “take them down”. I knew he meant to kill them. I said I’d think about it. I got out of that room as quickly as possible.

It’s been a week since that day. I’ve made my decision. I won’t help them take the Chaos Family down. I’ll help the family burn the world if I have to. I am a strong believer in controlled burns, after all. I don’t know if I will die by not helping them. But I can’t bring myself to hurt that family. They don’t deserve what they’ll go through if they get caught. None of them deserve what they’ve already gone through. The Chaos Family will not be touched so long as I’m here. I will watch from the sidelines for now, but I will protect them. I’ve gotten this far. Maybe I am a liar,and a villain, and a danger to the world. Maybe I have gone insane.

I don’t know how you’re reading this if you are. But I no longer care if the world burns.

I’ve got nothing left to save from the ashes.

Not Yet In Custody

(Sooo, yeah! That’s the story! It kind of got out of hand, but now I’m tempted to write more because now my brain is just bursting with ideas for this character as well as others…)

Your writing is AMAZING- OH MY GODS- I love this soso much!!! Aaa if you want to I’d love to read more of your stuff if you decide to write more. Aaaa I love this,,,

No I think you got them right-

But d a m n Niko you think I’d do all that? You’re right wrong-

#not tired, #Shit I meant, #not countdown
3 notes · See All
lookingforromansconfidence·2 days agoText

Wow, it’s almost like we’re trying to get to two-hundred twenty-five countdown blogs by December twenty-fifth or something.

#not countdown, #We're either at or over two hundred at this point
3 notes · See All
lookingforromansconfidence·2 days agoText

#You're getting this one early 'cause I'm bored fdhgjds, #I have no opinion on this number
7 notes · See All
lookingforromansconfidence·3 days agoText

Hey, Chaos Fam. My discord screwed up so I need the invite to the server again, can anyone give that to me?

Me, with absolutely no context,

an associated equation is sheep not sleep, which can be amounted to sheep > sleep

but sheep do sleep!! so sheep = sleep

so it’s not sheep > sleep, sheep and sleep are the same thing, so it’s sleep = sleep

and with substitution, sheep/sleep = sleep/sleep

which means that you must get 1 full night of sleep for every night.

I see. You do make a good point there. But consider.

I will not be providing context

I would like to state that the sheep not sleep movement is not universally accepted in the chaos family, and is mostly used as an argument by Cenn and Anny as to why they don’t have to sleep /lh 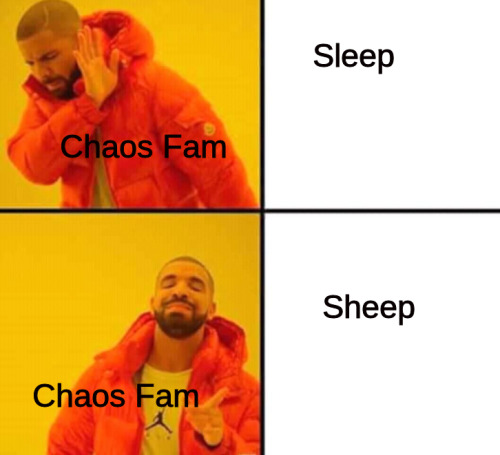 #And me but I /actually justify it/, #not countdown, #Sheep not sleep amirite, #the chaos fam
53 notes · See All
lookingforromansconfidence·3 days agoText

Me, with absolutely no context,

#Sheep not sleep amirite, #Seriously though- everyone should get sleep it's important, #I'll only enact sheep not sleep when I don't have anything important, #the next day, #not countdown
26 notes · See All
Next Page