We looked inside some of the posts by lost-piero and here's what we found interesting. 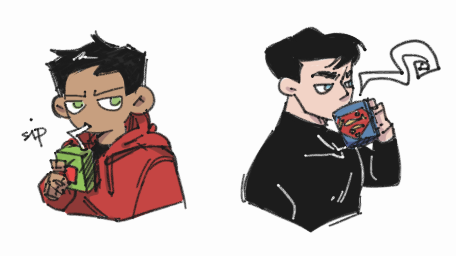 me, verbatim, upon seeing (all your art really but specifically the dickory ~chu): "oh no they are too soft, too baby, i love them so much... "

Hehe, they always have a special place in my heart

jason todds ? arkham knight jason and dexter soy jason and red hood jason and gotham knights jason. what I meant is everything but it is jason

AHH! I was the one who asked for the the jason todds and I LOVE IT ! You are you good like DAMNNNNNN WOW.

Ah, thank you! I’m sorry for the time I took to get to your request >< I’m glad you like it

jason todds ? arkham knight jason and dexter soy jason and red hood jason and gotham knights jason. what I meant is everything but it is jason

can you make the recent Tim, Damian, and Jason drawing into a sticker it's so cute 😭

I sure can; on my RedBubble now

Your art makes me smile until my face hurts!!! It's just so lovely and expressive and sweet!!!!! Thank you, and I hope you have a sweet day!!!!

TwT Thank you, anon! I’m always happy to read my art can make people smile. Hope you have a good day too

I’ve worked on a second fic for @batfam-big-bang; this time it’s for @schweeeppess ‘s fic “Come, let’s watch the rain”.

Image Description under the cut.

[ID: The image consists of 3 panels drawn with a monochrome palette on a white background. Starting from the upper left, the first panel is a profile view of Tim saying “Dick”. The second one is a close-up profile view of Dick’s eyes: they look dull and his hair is slightly wet. The last panel features Dick sitting by a grave on the grass and Tim not too far behind him, standing up, saying “Come on, let’s get you cleaned up.”. END ID] 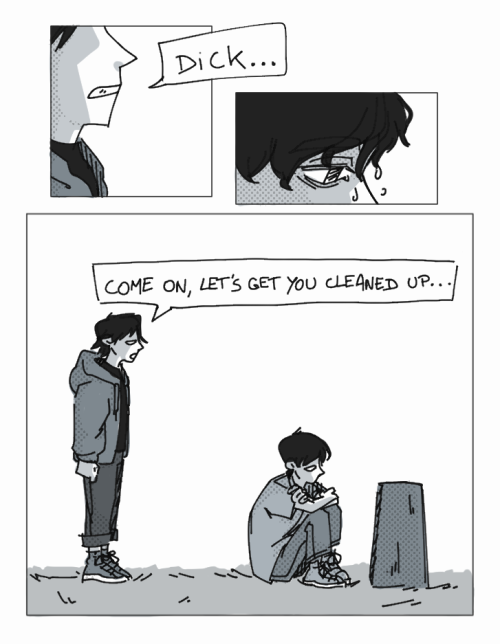 (I’m a bit of a mess lately, this is the only decent thing I could draw) 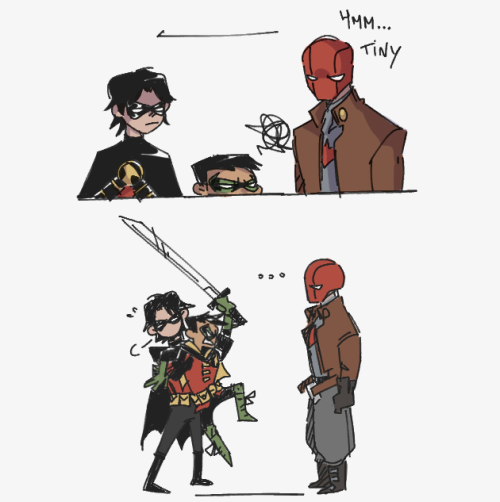 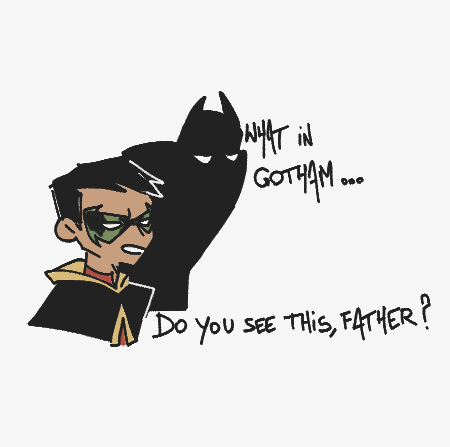 Are you taking art requests? If yes, can have a meeting between Oracle aka Barbara Gordon and Stafire as two buddies? 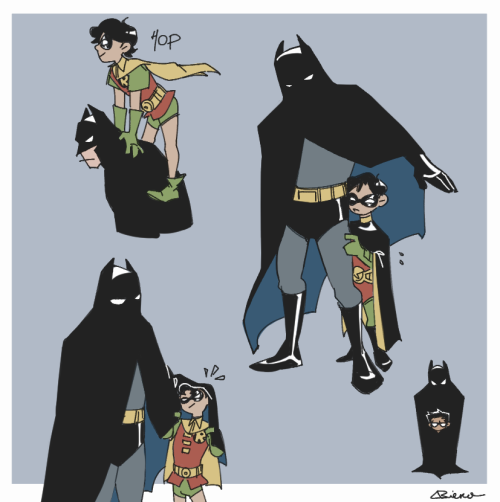 Participated in @batfam-big-bang ; Art for the fic of @yellow-warbler: Extremity on AO3. Image descriptions under the cut.

[ID #1: The image consists of 2 characters standing in the center: on the right is joker, holding is hand in front of him, palm up, pointing to the child on the left, who is Joker Jr. aka Tim Drake. They both are smiling and are wearing te DCAU Joker suit. They look slightly at something on the left of the audience. On the top left corner of the image is a grey panel, with a bat symbol on the upper left corner, that reads: “He tortured Tim, Wally. Used everything He vould think of to break my son. and it worked… END ID]

[ID #2: This image consists of 6 panels on a white background. The first one, starting from the upper left, is a speech bubble next to a Flash symbol that reads: "Thank, J. Ah, Alfred. it smells amazing.” The next three panels shows Tim, only the bottom of his face and his shoulders showing, wearing a red T-shirt: the first of the three is Tim, drawn in a ¾ view looking to the left, getting startled by the dialogue; in the panel following, Tim starts giggling (same view); on the last one of the three, Tim is fully laughing, this time he is shown in a profile view, his mouth wide open and a few “Hahaha”’s colored green with neon purple shadows coming out of it. The fifth panel is a close-up to one of Tim’s blue eye, a single tear in the corner of it, his eyebrow drawn down. It ends with a text panel reading a few “sorry”’s surrounded by the same previous “Hahaha”’s. END ID] 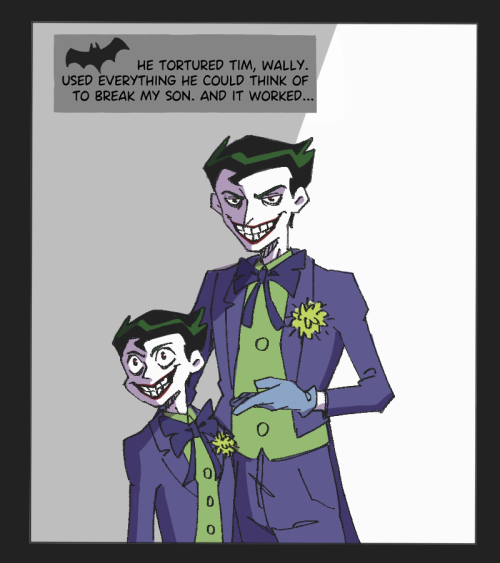 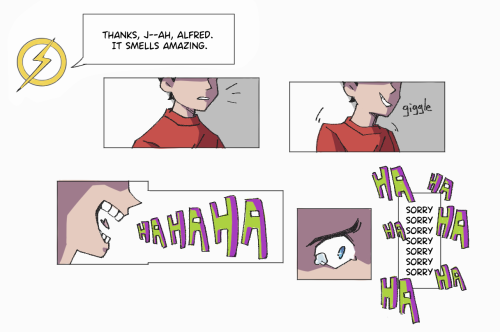 Okay so, can I ask you some Kon and Luthor? Like some divorced parent/child interaction? (I hate Luthor so much, but this energy is too wholesome for my depressed heart qwq)

Getting patched up even though it’s not necessary

Can I say that I appreciate you not drawing Damian with pale skin? For real, I'm tired of seeing him drawn as white as Bruce, and you do him just right. And he's adorable on top of that!! Thank you!!

Ah thank you; I often thought it was weird considering his heritage ^^’

asdfhkajsf i love your art So Much <33 your whole blog is literally my happy place now and i love you for that (also i love your icon because it always feels like damian's running this blog too :D) 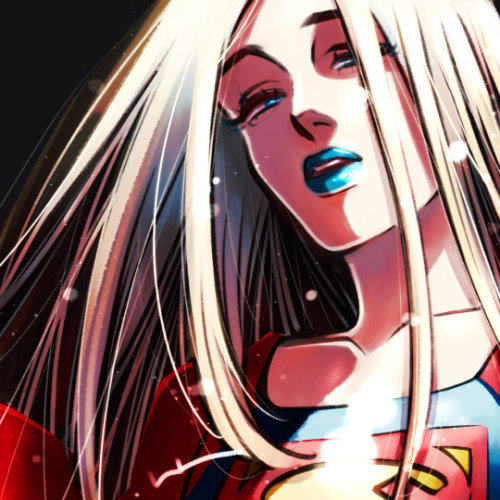