We looked inside some of the posts by lostprofile and here's what we found interesting.

Cardinal and Archbishop of Siena Federico Todeschini founded the Libreria Piccolomini in 1502 in a large vaulted chamber accessed from the transept of the cathedral of Siena. The library was intended to serve as a repository for the large collection of manuscripts assembled by his uncle, the humanist scholar, diplomat and cardinal Enea Silvio Piccolomini, who served as Pope Pius II from 1458/64. Pius II made Todeschini a cardinal in 1460 at the age of 21. Throughout his career, Todeschini sought underscore his relationship to Pius II and the creation of the library restated that connection in the months leading up to his own accession to the papacy Pius III in 1503.

The aged Pius III died 26 days after his election. Nevertheless, the decoration of the library proceeded. The wall frescoes depicting episodes from the varied career of Pius II were painted between 1503/08 by Bernardino di Betto, or il Pinturicchio, who had recently finished painting the Borgia Apartments in the Apostolic Palace. According to Vasari, Pinturicchio invited the young Raphael, his fellow student in Perugino’s workshop) to contribute designs for several of the frescoes. Raphael’s drawings for the scenes depicting Enea Silvio Piccolomini departing for the Council of Basel and Piccolomini introducing Frederick III to Eleanora of Portugal survive and show that Pinturicchio faithfully executed his friend’s ideas). Raphael assisted in the painting of the frescoes as well and both artists included self-portraits in the cycle. Pinturicchio daringly gave his features to the foppishly-attired figure of Enea Silvio Piccolomini on horseback in the first scene; Raphael holds a candle at the canonization of Catherine of Siena.

Despite the completion of the frescoes in 1508, Pius II’s books were never transferred to the library. The choirbooks currently displayed on late-15th wooden shelves in the library space were commissioned by the cathedral chapter after the death of Pius II. They contain some of the finest examples of northern Italian book illumination by Liberale da Verona and Girolamo da Cremona, but have no connection to either Piccolomini pope. 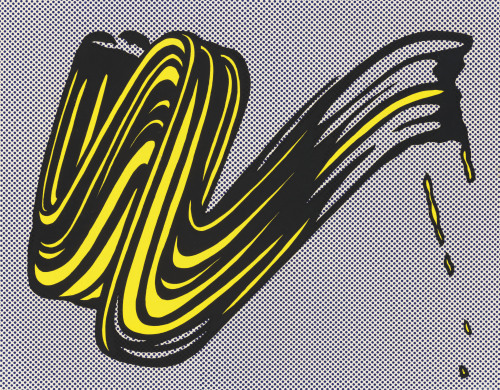 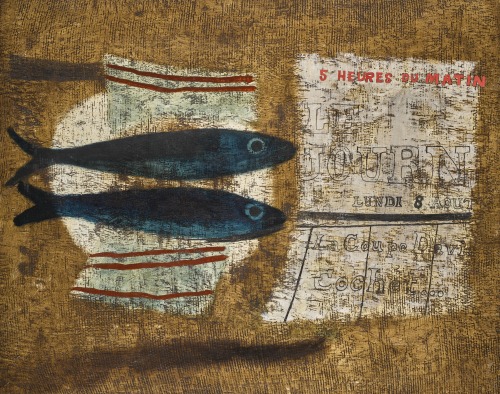 Art Nouveau was the first pan-European style since Neo-classicism. Easily imitated, content free, and highly adaptable, the style was particularly appealing to private patrons uninterested in the politics of national styles that had characterized the various historical revivals of the 19th century.

The signature serpentine, coup de fouet gesture could devolve into spineless dither and filigree, however, and by the end of World War I, everyone agreed that the fin-de-siècle was over. In Europe, the various manifesto modernisms prevailed; Americans contented themselves with Art Deco, or, as Roy Lichtenstein put it, “modernism for the home.”

Workers of the World Unite!

—Marx and Engels, The Communist Manifesto

He who does not work, does not eat.

If I could express with a single word what it is that distinguishes Tamayo from other painters, I would say without a moment’s hesitation: Sun. For the sun is in all his pictures, whether we see it or not.

Around 1550, Titian conceived of a cycle of large paintings with mythological subjects chosen by himself from Ovid’s Metamorphoses. After Maximilian II declined the offer, he approached Prince (and after 1556, King) Felipe II of Spain, who agreed to finance the project. Over the 11 years, the 6 canvases were slowly painted and dispatched to the Alcazar palace in Spain.

In a letter to Felipe, Titian refers to the paintings as poesie, implying that the pictures, derived from a classical text, were comparable to literary productions, and. by extension, that painting was an intellectual pursuit. Titian’s art, of course, was renowned for its hedonistic sensuality, not its sober learning. Titian was well aware of this, and the Ovidian poesie do not disappoint: using Venetian prostitutes for models, the pictures all feature nude females in amorous contexts. How these bravura exercises in eroticism were received by the pious Felipe II (or what his queen, Mary Tudor, thought about the pictures) is unknown. The works were all accepted, but relocated from the more public Alcazar to the more private Buen Retiro palace. The group was gradually dispersed in the subsequent century.

Titian never saw the finished paintings together, but you can. They have now been reunited for the first time since the late 16th century in an exhibition entitled Titian: Love, Desire, Death. Organized by the National Gallery of Art, the Museo del Prado and the Isabella Stewart Gardner Museum, and curated by Matthias Wivel, the exhibition includes seven works:

— Danaë, 1551/53, London, The Wellington Collection, Apsley House. Long thought to be one of six copies of the picture, this version is now considered to be the one sent to Felipe.

— Venus and Adonis, 1554 and Danaë, 1560s, Madrid, Museo del Prado. The Wellington Danaë and the Venus and Adonis were among the early works delivered to Felipe around 1554. Superior in quality to the Wellington version, the Prado Danaë was assumed to have been Felipe’s picture until recently argued otherwise. It is included in the show in order to continue the debate based on the side-by-side comparison of the two paintings.

— The Rape of Europa, 1562, Boston, Isabella Stewart Gardner Museum. The Gardner Museum rarely loans its works and this recently-restored Titian is the pre-eminent picture in its collection and the centerpiece of the exhibition.

— Death of Actaeon (1556/75) London, National Gallery. This picture was intended to be part of the group, but was left unfinished and never delivered.

Unfortunately, this focused, humanly-scaled exhibition, providing a unique opportunity to see a group of supreme masterworks of western painting in their original pictorial context, is going unseen in London, due to the museum’s closure caused by the coronavirus pandemic. The exhibition dates at all four venues (London, Edinburgh, Madrid, and Boston), however, might be rescheduled—a huge logisitical challenge, but one seemingly worth the extra effort.

The opening date of the National Gallery’s Artemisia Gentileschi exhibition has also been postponed. 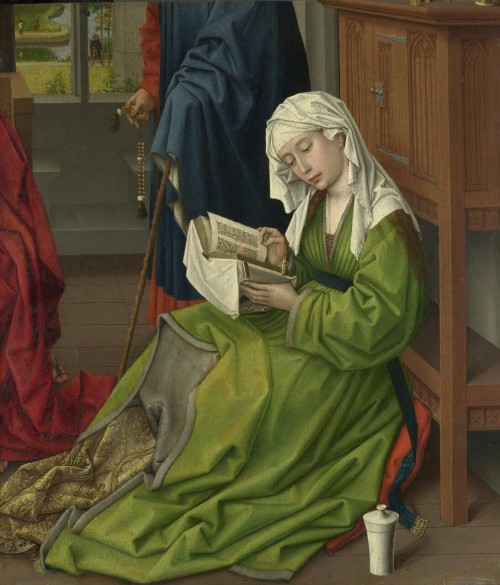 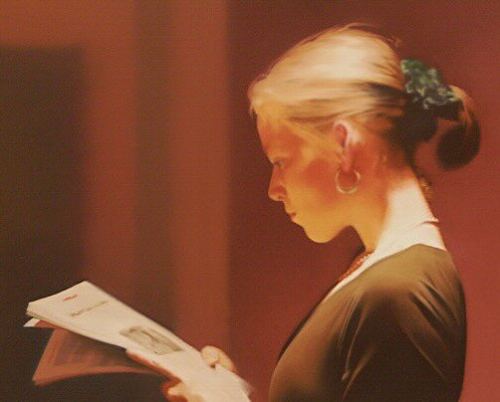 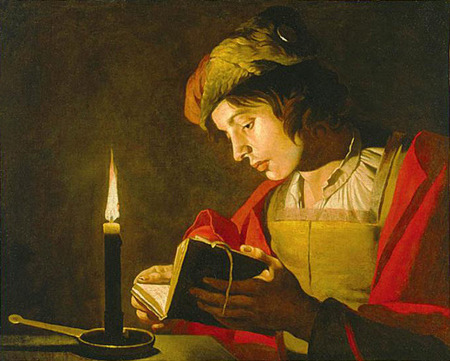 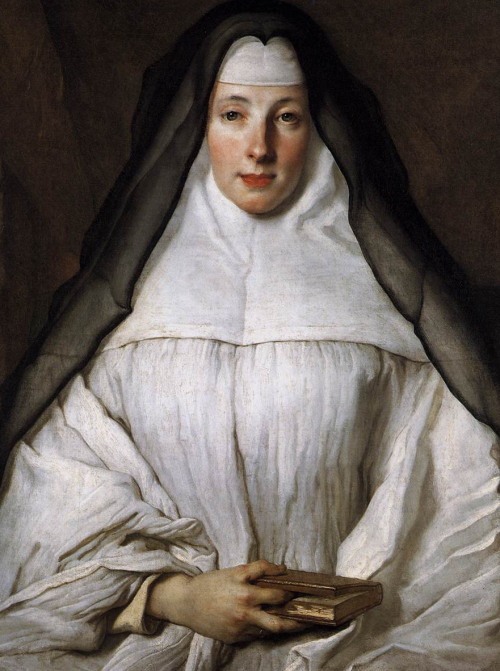 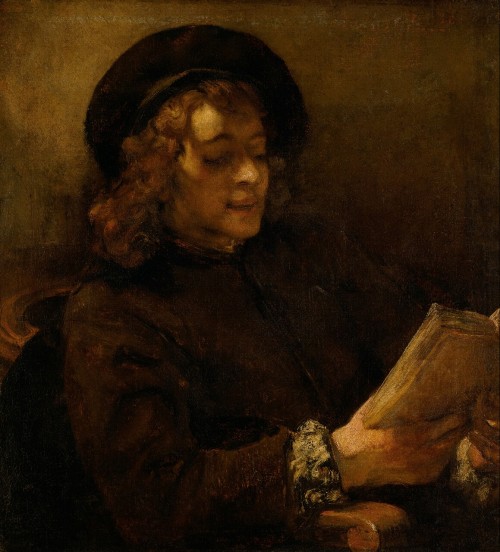 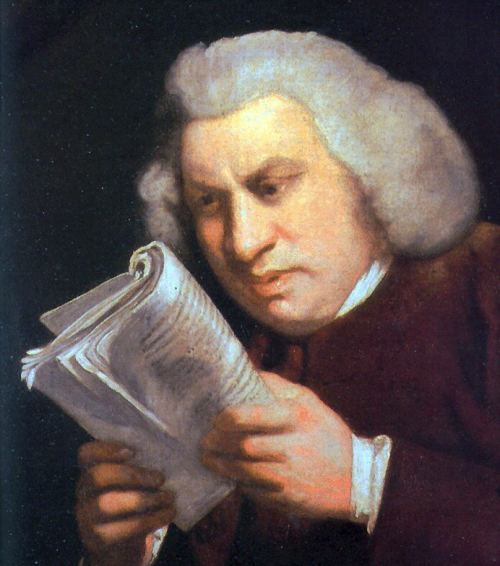 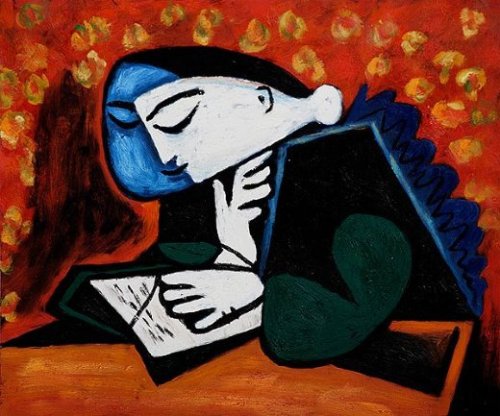 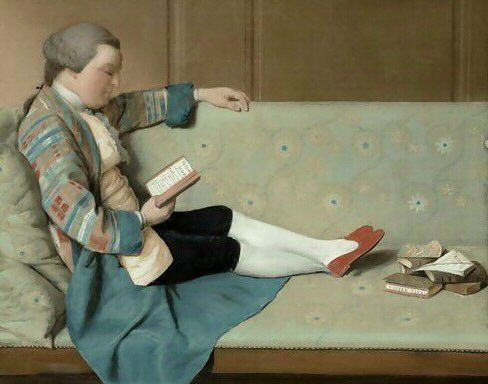 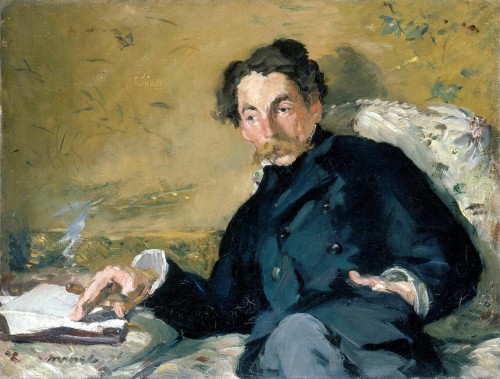 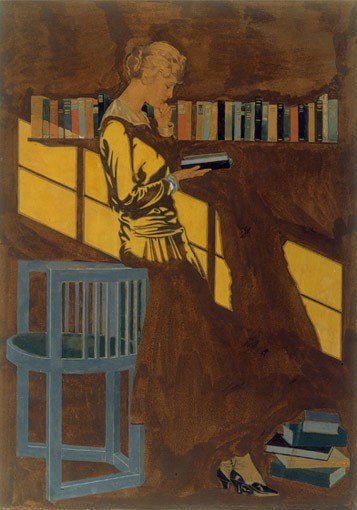 Apart from the signatures on four of his paintings, there are no surviving historical records testifying to the life of Dutch artist Jacobus Vrel. The documentary evidence from the 17th century related to the approximately 38 paintings now attributed to Vrel amounts to a few lines.

Based on the year of his only dated picture, 1654, Vrel is thought to have been active between 1632-62. His pictures of Dutch interiors, occupied by single female figures, engaged in domestic activities are said to  resemble the work of Pieter de Hooch and Johannes Vermeer. This theory is contradicted by three of few known facts about Vrel and his work:

Vrel is never mentioned in any of the Delft archives;

His only dated work, the Woman at a Window of 1654, predates Vermeer’s and De Hooch’s earliest interiors;

The Woman at a Window and its pendant, The Sleeping Woman, were acquired in 1654 by David Teniers the Younger for the Brussels gallery of Leopold Wilhelm, the Dutch governor of the Spanish Netherlands.

If a major artist acquired works by Vrel on behalf of powerful and wealthy collector in Vrel’s lifetime, Vrel must have been an artist of some consequence. The compelling visual evidence linking Vrel to Vermeer and De Hooch has clearly been misinterpreted: Vermeer and De Hooch were influenced by Vrel.

Not only does the documentary evidence disprove the theory of Vrel’s derivative status, the supposed pictorial resemblances that launched the theory are at best superficial. The women depicted in Vermeer’s interior scenes are usually contentedly absorbed in their pleasurable activities and the amount of the room depicted is closely scaled to the height of figures. Vrel’s figures, viewed from a distance or from above, are dwarfed by gloomy, cavernous chambers. The are not only alone, they are lonely. Whereas Vermeer’s women happily inhabit their well-lit rooms, Vrel’s seem desperate to communicate with the outside world (Woman at a Window) or to escape to other worlds through reading (Woman Reading). When they cannot escape, they collapse completely (An Interior of a House with a Seated Woman).

The elliptical, metaphysical drama of an elderly matron reading in a brightly-lit room devoid of furniture, at night, with a shadowy figure of a boy peering in the window, or of another old woman, who risks falling off her chair to wave back to a young girl standing outside her window in the black of night are as far from Vermeer’s incisive vignettes of self-absorbed, smartly-dressed women as one could imagine. Vrel, and Vermeer after him in a much more more subtle manner, analogizes interior space with interiority, the private sphere with the private life, or the inner sanctum with the inner life. 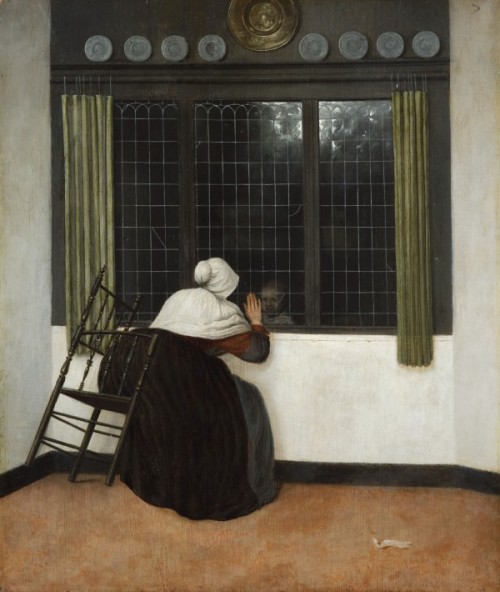 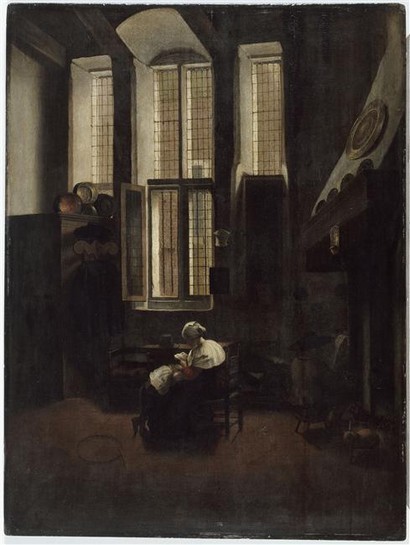 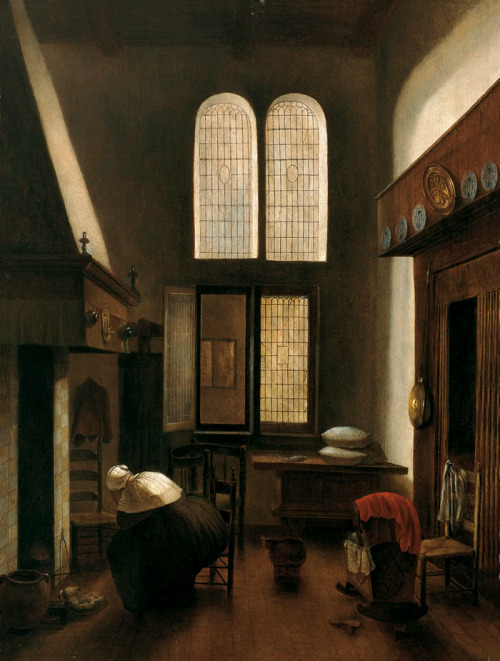 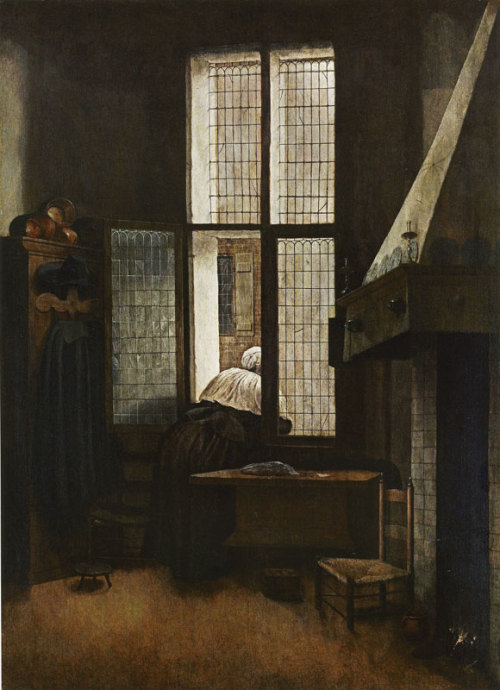 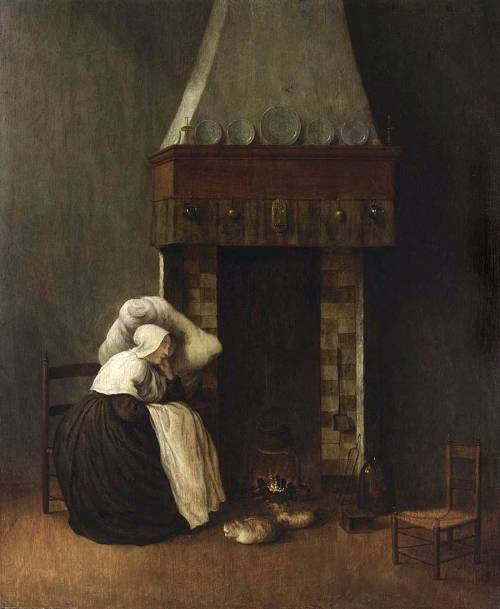 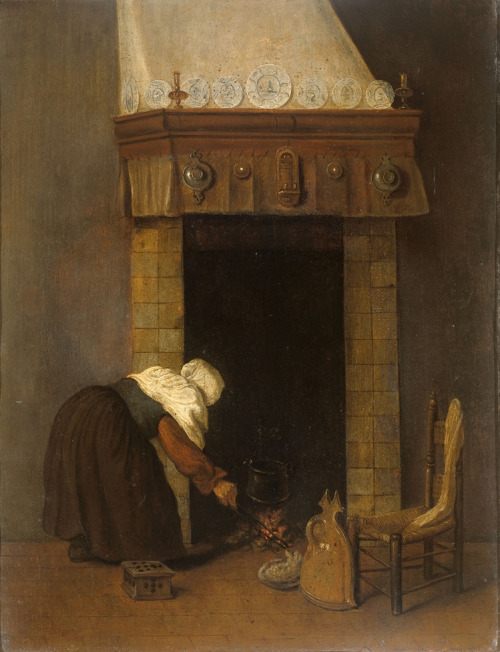 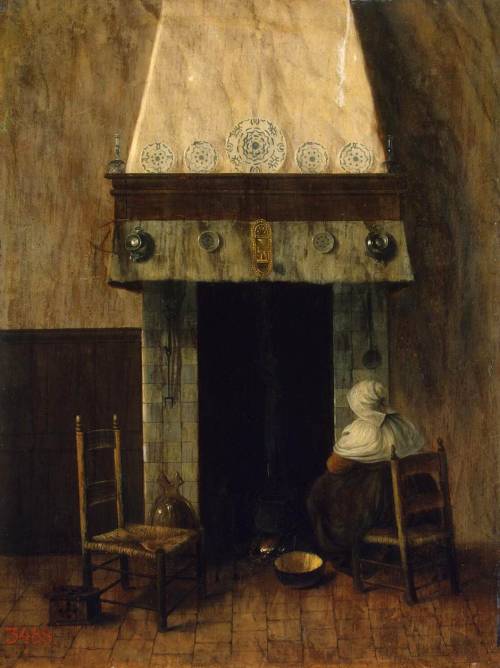 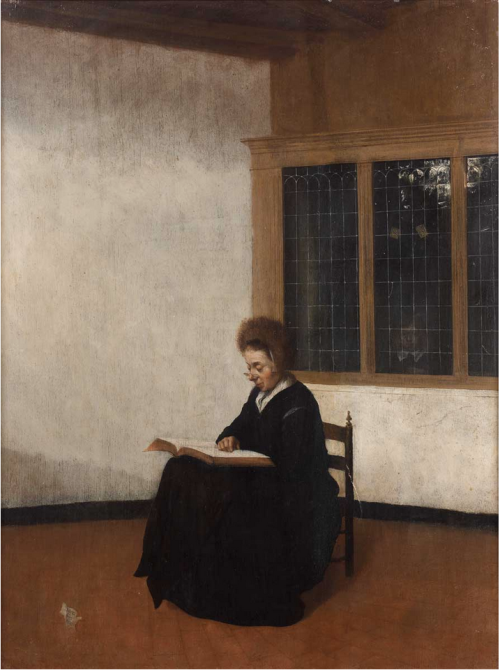 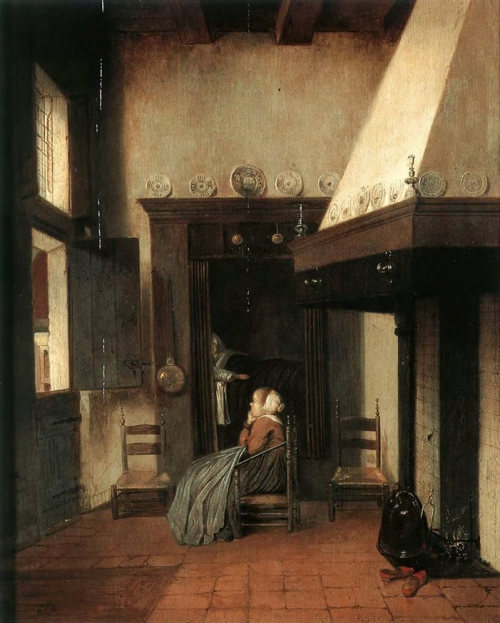 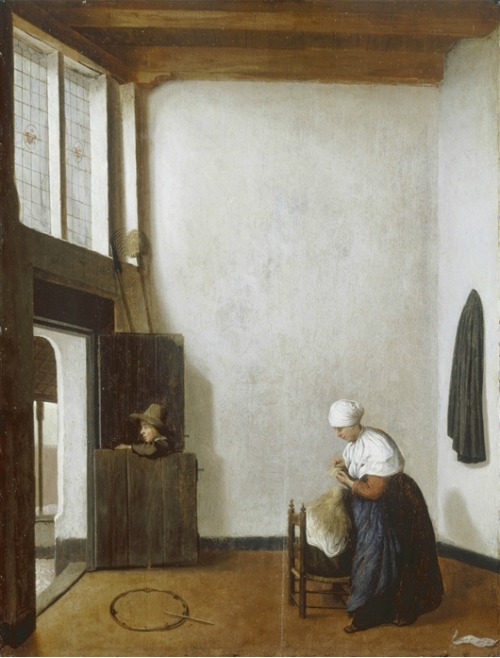 Doorway of a residential building, Berlin 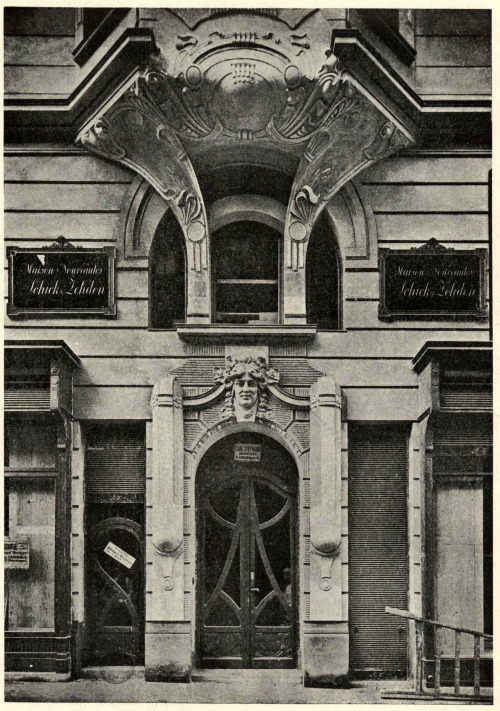 Ich habe keine Theorie, ich bin darauf angewiesen, dass mir etwas einfällt. [I have no theory, I am dependent on things that occur to me.]

The region between the Rhein and the Meuse rivers (roughly southern Belgium and Luxembourg) was the major northern center for copper-enameled metalwork in the 12th century. Mosan ciboria, candlestick, altars, reliquaries, croziers, pyxes and crosses figured prominently in the church treaures of northern France, the Low Countries, England and the German empire.

The so-called Alton Towers triptych consists of three enameled plaques manufactured in the Mosan region around 1160. As it is presently configured with closing wings, the work appears to be a portable altarpiece or devotional triptych. Neither of those genres existed, however, in the 12th century. Mosan metalworkers produced portable altars and reliquary triptychs but purely pictorial works that served as backdrops to the performance of the Mass were unknown.

The iconography of many Mosan liturgical objects is drawn from the allegorical or typological interpretation of scripture that expounds the mystical relationship of the old and new testaments. For example, the three scenes from the Passion of Christ depicted on central panel of the Alton Towers triptych are matched with Old Testament prefigurations on the left and right panels. The iconographic programs for these works were probably dictated by a learned representative of the commissioning institution.

Diagrammatic structures and schemata are often employed to facilitate the comprehension of this erudite content. The framing roundels of the Alton Towers triptych are linked by banderoles and color-coded to indicate various relationships. To be able to execute these complex structures, which often were accompanied by versified Latin inscriptions, the artists must have been at least rudimentarily instructed in this form of biblical exegesis. This instruction, however, only went so far: the Latin inscriptions the monumental Klosterneuburg Altar by Nicholas of Verdun contain many errors probably introduced by semi-literate artists who copied, rather than read, Latin. 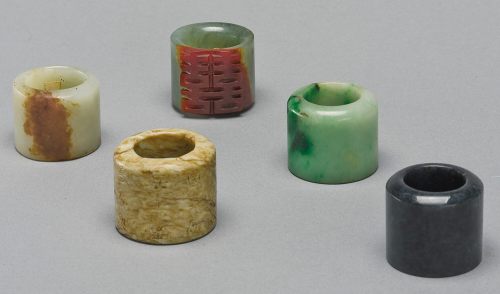 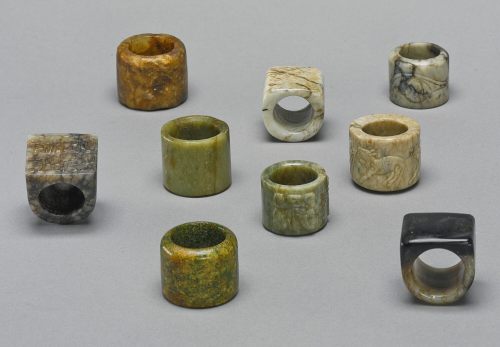 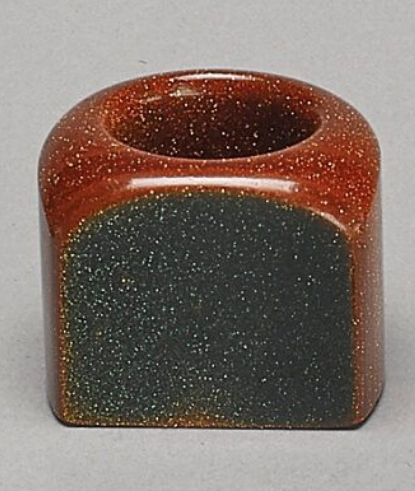 THE SAME ALL OVER

The obvious answer was symmetry—make it the same all over. The question still remained, though, of how to do this in depth. A symmetrical image or configuration placed on an open ground is not blanced out in the illusionistic space. The solution I arrived at—and there are probably quite a few, although I know of only one other, color density—forces illusionistic space out of the painting at a constant rate by using a regulated pattern.