Theme blog established on August 5th, 2017. All codes are created on a 13" Macbook Pro with a screen resolution of 1440 x 900. They are optimized for Chrome and Firefox and are compatible with all desktop screensizes.

We looked inside some of the posts by nemurou and here's what we found interesting.

nemurou·23 days agoAnswer
hi! your code for your daydream theme doesnt work :((( i keep getting a 404 error

Hi! The link to the code has been updated. The permalink of the theme post will direct you to the correct link.

#inbox, #daydream, #blog, #justiceforafterschool
2 notes · See All
nemurou·a month agoAnswer
Hello! Your Daydream theme is so cute and pretty ❤️ I wanted to ask if it’s possible to make the pagination arrows bigger?

Hey, thank you so much!

Find the code below:

and change it to the following:

Replace 14px with the adjusted font size of your choosing. If you are copying and pasting the code directly above, be sure to retype all the quotation marks.

#inbox, #daydream, #blog, #anon
2 notes · See All
nemurou·a month agoAnswer
Heyhey, absolutely love your themes and would love to use daydream if that's possible? The link to the code seems to be broken😅

Hi, thank you so much!

The post permalink for Daydream should direct you to the working link.

#daydream, #inbox, #blog, #loveoversense
1 notes · See All
nemurou·2 months agoAnswer
hello, recently stumbled across your tumblr and wanted to say 1) i love your themes so much, and 2) i also saw seventeen at prudential center! love that for us 🥺💜

hey, thank you sm! it’s always nice to meet fellow carats 💖i hope you had an amazing time at the concert!!

I’m 3 weeks into the new semester and I’ve been busy with coursework, applying for co-ops, etc.

Over winter break on January 10th, I got to see Seventeen live at Prudential Center! It was my first time going to a concert and the fact that it was Seventeen made it even more special.

I still remember when I began stanning Seventeen- it was the day before Clap was released. I had come across a KCON 2017 Youtube video of Seventeen performing Don’t Wanna Cry and was instantly mesmerized by Jeonghan and Joshua LOL.

All 13 members of Seventeen are such a source of inspiration to me and it was absolutely surreal seeing them live! I had so much fun 😭💖

As of now, I do not have any plans to make new themes. For those of you who have sent an ask regarding my codes, I apologize for the lack of response 🙇‍♀️

#update, #seventeen, #blog, #ok back to my assignments, #i was just feeling a bit emotion because i was watching the videos i had recorded during the concert
5 notes · See All
nemurou·5 months agoAnswer
Hello I am using one of your themes for my blog but I cannot seem to remove the word "Daydream" to my blog title which is what I thought thats where your blog name is supposed to go? I honestly do not know anything about tumblr themes, but I am creating a special blog and I really would like to have a nice theme. If you could help me I would greatly appreciate it. Thank you so much for your time!

Hello! On the customization panel, you can replace ‘Daydream’ by inputting your own blog title.

#tofinallygetitright, #inbox, #blog, #daydream
3 notes · See All
nemurou·6 months agoAnswer
Could I perhaps use the old DS theme you made?? Thank you!

#reaganlikestea, #blog, #inbox
0 notes · See All
nemurou·8 months agoAnswer
all your themes are wildly gorgeous and unique! daydream being "poorly executed"? absolutely not the case. what you manage to create is always modern, interesting and inspiring. awesome job!

#inbox, #blog, #kishinuma
2 notes · See All
nemurou·8 months agoAnswer
hey gurl c: i just wanna say thank you for your theme (porcelain) ! i've been looking for something i like a long time. and now i've found it ! thank you very much ! and i wish you best of luck in your studying web ! all love x

thank you! im happy to hear that you like the theme ❤️❤️

#inbox, #anon, #blog, #heading back to uni in a week & im very nervous lol
0 notes · See All
nemurou·8 months agoAnswer
Hi. Just out of curiousity - is there a way to get rid of a thin black stripe that is beside a video post on Skyfall? Like would it be just a basic code shift? I love the theme regardless (and your other ones too)!

hello! are you perhaps referring to the black line shown in the screenshot below?

if so, then removing it wouldn’t be a basic code shift. skyfall’s one of my older themes and it doesn’t feature dashboard captions to accommodate tumblr’s new post type (which is basically inserting any post type into a text post format). i’ll eventually get around to updating my older codes but if you would like to try yourself, you can either implement un-nest captions or use the new tumblr blocks.

#inbox, #skyfall, #anon, #blog, #thank you for liking my themes~
0 notes · See All
nemurou·8 months agoAnswer
hi there, your themes are gorgeous! I was wondering if you had any tips on how to make them more accessible? a few of my followers have complained about small fonts, but I seem to lose the #aesthetic aspect if I just edit the html to make the font larger. I'm clueless about coding, but I don't suppose there's something like an alternate large print blogroll option I could add?

hello! ah yes, accessibility. this is something i’m struggling with trying to work on as well. unfortunately, i’m not well-versed in javascript but i’m sure it’s possible to adjust the font size on your theme based on manual input(?) if that’s what you’re referring to.

besides having large fonts, there are a lot more things you can do to make your theme (or any website really) more accessible such as:

#there's a lot of articles online about accessibility which you can check out as well, #i'm saying all of this but i too am guilty of not doing the things listed above lol, #inbox, #anon, #blog
2 notes · See All
nemurou·8 months agoAnswer
hi, Thank you for creating skyfall. it is absolute gorgeous theme! anyway when I changed my post-width to bigger than 500px, my post images can't stay in the center. the margin is always reverted back to left. however the preview post clearly show it that both images and post body can stay in the center. I hope you're not confused my poor english writing skill lol looking forward to your replies thank youu

no worries, your english is great! i tested skyfall on my main blog and i believe some posts are aligned left because of tumblr’s new post type.

on the customization panel, toggle the Use new post types option located under appearance options!

if that doesn’t work feel free to contact me again! also, thank you for using my theme :-)

A theme suited for photo blogs featuring side captions.

A like or reblog would be appreciated if you are planning to use this theme! Please direct all your questions and feedback here. 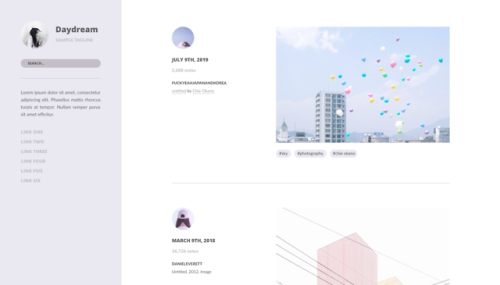 #theme hunter, #yeahps, #themes, #completeresources, #tumblr theme, #blog, #code, #daydream, #i posted a wip of this theme a year ago and now here we are at last..., #nice concept but poorly executed!
1K notes · See All
nemurou·9 months agoAnswer
I really love all of your themes! You're going to do amazing things.

#inbox, #anon, #blog
2 notes · See All
nemurou·a year agoAnswer
hi there! I'm trying to install Skyfall, but on my blog the little horizontal line on either side of the date at the top of each post cuts all the way through the text, like a strikethrough (unlike in the preview.) Is there a way to get rid of this?

Hey there! You can fix this by changing the color of the background in the customization panel.

#inbox, #skyfall, #blog
0 notes · See All
nemurou·a year agoAnswer
hi i really like your themes ! i was wondering if you had any/could reccomend any bias pages? most of the ones i've seen only have a few spaces for the biases and i have a lot.. thank you !

hello! thank you so much <3 i don’t have any bias pages (for now) but i have a bias/family page tag on my resource blog if you want to check that out!

#inbox, #xupids, #blog
2 notes · See All
nemurou·a year agoAnswer
what is the meaning of update one, two and so on?

they’re changes i’ve made to my codes!

#inbox, #blog
2 notes · See All
nemurou·a year agoAnswer
Hello! I've been using the Soft theme for a long time now and was wondering what happened to it. I wanted to update the theme, but it looked completely different from the actual preview.

Hi! Thanks for informing me; it looks like I replaced the code for Soft with another theme’s code during the last update. The original code is now back on pastebin.

#inbox, #pxmen, #blog
2 notes · See All
nemurou·a year agoAnswer
hi!! i absolutely LOVE your themes, thanks for making them:)!! quick question though, i can't seem to figure out how to fit my sidebar pics on your vanilla theme :( once again, thank you for sharing your themes uwu

#inbox, #vanilla, #goingdokyeom, #blog
0 notes · See All
nemurou·a year agoAnswer
are you open to the idea of accepting theme commissions?